I haven't said much about the game yet, so how about I explain the combat/weapon system in Byte Sized Heroes? 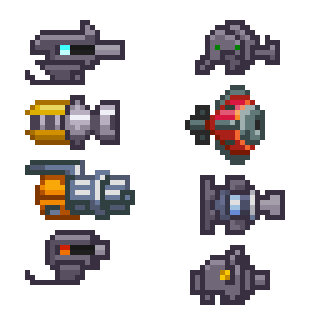 Byte Sized Heroes is a Platformer SHMUP (Shoot 'Em Up) game, so obviously guns are what we use for combat. But these guns work a bit differently than from what you're probably used to. Firstly, guns are all defined by type:

I don't plan on going into great detail here about the guns, because that's actually not the most important part, buuuut...

Secondary weapons can range from pistols to swords, etc. They are no kinds of secondaries, but all secondaries are specific to the armor you choose. For instance, an armor that uses swords, can only use swords, and an armor that uses a second primary weapon can only use a second primary weapon. As of right now, there is only one armor that is not limited to it's secondary, which will be the first one you get. But this also takes away from the next thing... 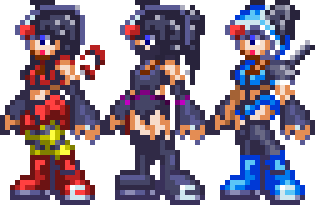 There are multiple things that are armor restricted, aside from secondaries. Each armor has a set type of Tactical Item and Strategical Item, but there's another restriction as well, which is armor abilities. There are two kinds of Armor Abilities: Offensive and Defensive, each of which are defined by the armor you choose. For instance, with Model T (The black ninja looking armor), your Offensive Ability is explosive shuriken, where the Defensive Ability is the ability to turn invisible. Likewise, Model F, (The red armor) has an Offensive ability of a kill ball radius, which will kill anything it touches, but also completely drains the user's shield, and has a Defensive Ability of a reflective shield that weakens as it's shot and when shot down will drain your shield completely, but you can move freely while it is up and it lasts for a while. The Blue armor (starting armor) has no abilities.

It's easy to guess by the name that Tactical Items will be used for offensive purposes. They're pretty typical, but useful as can be. An armor model defines what tactical item you can use. For instance, the blue armor uses a simple frag grenade, the black armor uses a stealth bomb, and the red armor uses a land mine.

Just as Tactical Items are defined by the armor model, so are strategical items. Strategical items are pretty handy, and will likely play a much bigger role in gameplay, because they can be easily used to alter the flow of combat. For instance, the blue armor uses a smoke grenade, the black armor uses a tracker (which can be placed on enemies to show their placement on the minimap), and the red armor uses a deployable bubble shield, which will deflect bullets and drains the player's shield.

So, I've already said some things about the armor models, but I haven't really said much about the main selling point of each individual armor. What I mean is that each one doesn't only have certain weapon and item restrictions, but they each have specific ways in which they are maneuvered. For instance, the blue armor is fast, but has no neat movement tricks. The black armor is VERY fast, and can climb walls. The red armor is slow, but can fly using the player's AP (displayed in the HUD as the blue bar). To top that off, specific weapons can actually increase the overall effectiveness of each armors' ability, like a weapon that can drain player AP, or a weapon that has a magnetic impulse, or a weapon that doubles a grappling hook. The combinations are only restricted by armor model, but not by anything else, so you'll have the ability to find your own way to play when everything is complete.