Frank Slimski talks about the gameplay elements of Infinite Pull. From the general components, goals, and rules ... to the level-up system's full listing of perks/abilities ... to its surreal elements.

Making a game like Infinite Pull, I wanted to create something that could be enjoyed over a span of 10 minutes and could also be enjoyed over the course of an entire day. For example, you could see how fast you can get to 10,000 points, which could take 10 minutes. On the other end of the spectrum, you could attempt the grueling task of hitting 1,000,000 points, which could take all day and still end in failure. Either way I wanted to create something that can be entered and exited easily and enjoyed on either a large or small scale. 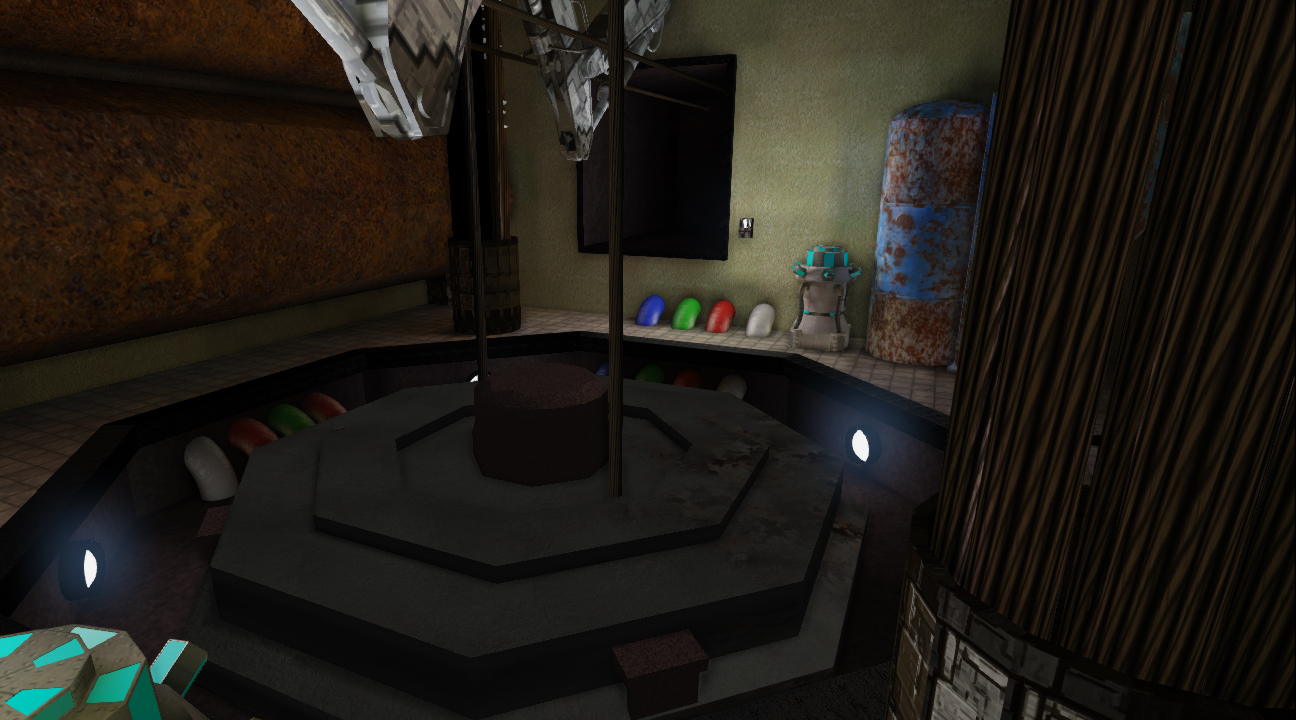 So I suppose that brings us to the entrance. The entrance is where the player starts. No intro movie. No fancy logo advertising my company. Just right to the start. This has to do with making a swift, accessible entrance for the joy of not having to wait through stuff. When the lid lifts off of the tubes, you're ready to go. The basic concept of this game is to collect shiny stones. Nothing new in the video game world. There's lots of coin collecting and precious stone hunting in all these digital worlds we bounce in and out of. As you fall down the infinite tubes, you collect precious stones to score points. You have boosters that blast you downwards at high speeds and a parachute that does just the opposite. You get double points for collecting while using boosters and half points for collecting while using your parachute. Now you only get 1 life, and even landing with your parachute on a platform will end your play, as it is against the rules. So you must fall infinitely and you must not make any mistakes. You could spend hours leveling up and trudging your way to 1,000,000 and in the blink of an eye, one wrong move, and your score resets to 0. So watch them boosters partner. They could kill ya in a flash. The first gameplay concept you need to get good at is knowing how to rapidly switch between boosters, chute, and neither.

Next we'll talk about the leveling-up system. There are 4 places to level up during the game. You reach them at point milestones. The milestones are: 10,000 ... 100,000 ... 300,000 ... 500,000. There are 8 perks/abilities. Ruby Red, Gold Rush, Stasis, Greed, Void Breather, Oxygen Addict, Meteor, and Super Bonus. Ruby Red and Gold Rush give you opportunities to increase point gains in the tubes. Stasis allows you to come to a dead halt mid-fall. Greed allows you to not lose your points upon dying, essentially giving you infinite lives. Now there are a lot of things in this game that reference infinite. The tubes are infinite. Parachute and booster use is infinite. Loot is infinite. The one thing, however, that is limited, is oxygen. The further down you get, the less atmospheric oxygen there is. You'll need your oxygen tanks for this. Void Breather and Oxygen Addict have to do with this gameplay element. Void Breather allows you to breathe without oxygen. Oxygen Addict increases the point value of picking up extra oxygen cartridges, but at the cost of increased usage.

There is an element of the surreal in Infinite Pull too. A straight-forward approach to beating the game is very difficult. You are encouraged to break the rules and find loopholes and weaknesses in the tubes. These can be exploited and used to more efficiently get to the end. The straight-forward approach could take 7-8 hours, but I've personally, as the developer of course, done it in 53 minutes. The game kind of puts you in a trance too. Falling down the rabbit hole for hours makes it hard to look away.

Infinite Pull comes out on Desura on March 21, 2013. A short demo will also be available at that time.