We need your feedback now more than ever, 2 demos to try, can you help us by picking the most fun one?

This is the eleventh entry in my devlog about my endeavor in making a game within 2 months (supposedly ) and releasing it as part of my course’s capstone. You can read the previous entry of the series here.

While this week the work done on the game hasn't been as much I would like to, we finally managed to keep a promise I made earlier (or at least half of it). That said we did learn the lesson. Alright, let's get to the meat of it...

We have been working on the game for 12 weeks right now and still within the prototype phase which I don't like much. I'd like to exit that phase into Alpha, seriously. But I have come to believe I can't just do it alone coding wise. As I am still learning code and making the game, I have monitoring my progress internally. I learned a lot, a huge amount I can attest to that. However on the hand I have lost a ton of time looking around for answers to simple problems that I discovered in the end shouldn't have taken all that time. Now, I am not complaining and actually searching and finding the answer is something I enjoy. I love this "expedition" of knowledge. Problem is, this doesn't mean I'll be able to finish this on the time I allotted for it. As such I started looking for a 4th person to jump in with me to code and explain things out for me.

Luckily, I was able to partner with another programmer. We've started looking at the code together and he has helped me figure a few problems out (more on that later). Ironically, the progress for the game wasn't as fast as I hoped as he was quite busy with other arrangements.

If you've read the previous entry you'd know that we've been cooking up a new gameplay mechanic to cater for the feedback that we received from our last Feedback Friday we did (2-3 weeks ago). The thing is we are too used to the game to judge fully. Not to mention that both gameplay experiences deliver unique kind of gameplay that is fun in their own, which is more appealing is something we shouldn't decide alone so we thought we'd present you with both. We are asking that you'd help us with a play test and telling us your opinion on which you liked the best. Here is a little more information:

However I understand that a GIF may not be appropriate to judge on these things so you can test the first game mechanics on a Windows and Mac. As for the new one, you can try the Windows and Mac versions. It would help us immensely if you try them out and give us feedback. We've even posted on #WIPWednesday thread on Reddit and the Wednesday Game Design thread for feedback.

When my coding partner jumped in I was facing a problem where I wanted the ball to go through enemies at times and other times to collide with it. On the other hand, I wanted the ball to have a "lifetime" where it gets affected by collisions; the more you collide the less lifetime you have and therefore the ball dies. I was able to get most of that functioning but the collision and going through enemies based on the player's choice wasn't something easy. The scenarios I tried up to that point:

At last my partner came in and he changed all enemies to a trigger. Since I wanted the ball to collide with walls and go through enemies (or collide with them based on a variable) why not set it to a trigger and control that trigger from the ball? So we went with that and lo and behold, it worked! I set up the variable, set up the references and calls while he changed the OnCollisionEnter2D to OnTriggerEnter2D. But then I realized we need the variable to turn on and off the trigger so we set up 2 scripts. The first with OnCollisionEnter2D logic and the other with the OnTriggerEnter2D. At the beginning of the game the player determines what kind of effect he has (not intended real gameplay option but the player will definitely get to choose but not in this manner) and the appropriate script gets added to the enemy with the trigger being turned off or on.

The funny part, I spent 3 days looking for a solution to this and nothing on the internet worked. It was only this one solution that did. Since I didn't find anything similar on the internet (perhaps my research skills are lacking, I don't know), here is the code I have been using:

Quickly I wrapped things up and made a build for the posts. Hopefully we can get feedback on the gameplay and see which people prefer.

On the other hand, Serg has been working hard on the art side of the game. He has finally finished the animations for the Ghost character and here is the projectile that he'll shoot at the player.

He has also produced a few colored concepts for the dark wizard which you can see below:

I liked the colors of the 2nd one most with the skin color of the 3rd so we agreed we can make a mix and see how it goes from there. Next time hopefully we can provide you with a better drawn final. Meanwhile you can see the final product of the goblin here: 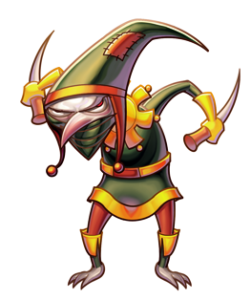 That said he has finished coloring the armory level which you can see below: 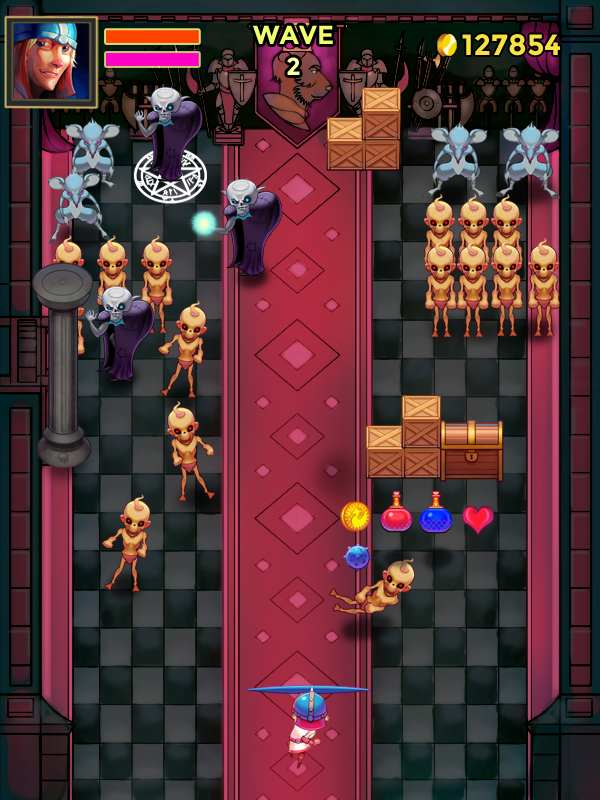 I did learn a lesson with promises as I have been promising a few updates a couple times and a few times I miss the promise (although I promised 2 demos this week and I delivered). As such I am not going to promise anything from now on with time and date. What I can say is that once we have the feedback about the gameplay we can move on to actual production and leave the prototype stage and jump into Alpha. All of this, can't be done without your feedback, so I can't stress enough how important it is that you try out both gameplay and reach out and tell us what do you think.

That is it for today, we do encourage you to try out the demos and let us know what do you think. Thanks a lot for reading and see you next week!