"Hey, sitting in the patio with a beer."  The first text I got at 4:38pm as I approached the bar. Countless thoughts and worries evaporated from my mind as I realized it was beginning. The poster almost slipped from my hands. Time to put on the game face.

"Hey, sitting in the patio with a beer." The first text I got at 4:38pm as I approached the bar. Countless thoughts and worries evaporated from my mind as I realized it was beginning. The poster almost slipped from my hands. Time to put on the game face.

(This article was originally published on my Dev Blog)

The party began 5pm at Club Contour in downtown Seattle. I came with a stack of flyers, a custom cut-out promotional poster, and laptop warming up in my backpack. Sporting a thematic suit, I said hi to my friend and politely excused myself to start setting up.

The laptop was hooked to the big screen. The flyers were scattered around. The poster was put upfront with simple instructions:

A simple scheme that netted quite a nice collage: 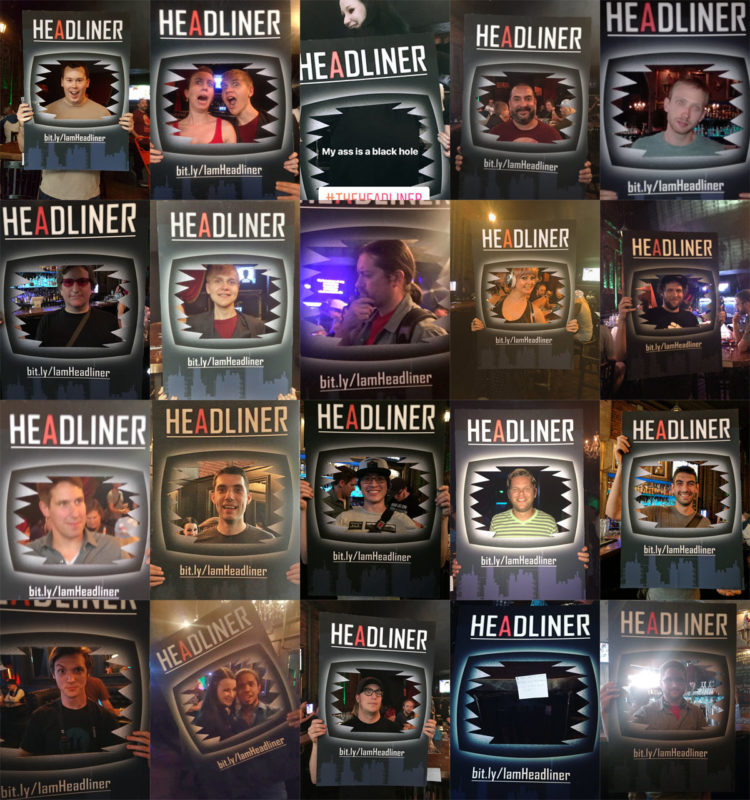 Soon, more folks showed up, mostly friends and fellow developers coming to support me. Drinks went around, games were played, people chatted and mingled. Everyone was having a good time. Hopefully.

At 7pm, things took a turn as the simple party turned into a Geekaraoke, a weekly event at club contour featuring DJ Baby Ketten. Some sang, some took photos, some drank, and others began parting for the evening. 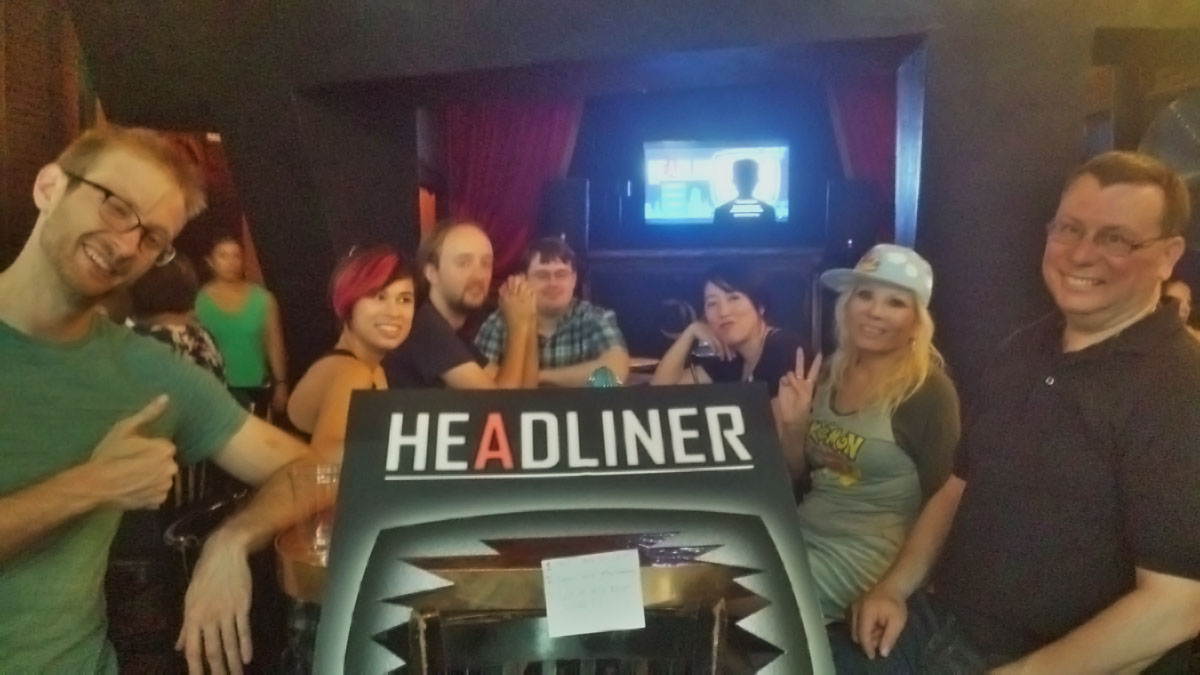 Around 10pm things were winding down. Most of the attendees were now long gone, leaving the Geekaraoke regulars and few friends whose work ends exceptionally late. Exhausted, I grabbed my backpack and way-too-hot-for-this-weather suit and waddled tipsily towards the nearest bus stop, ruminating over the night’s events.

The party was great fun for sure, and made the impending game release feel all the more real. About 30-40 people showed up over the course of the night. One of those things that makes you feel like “hey I am a real developer,” an always necessary reminder when the relentless impostor syndrome hits. 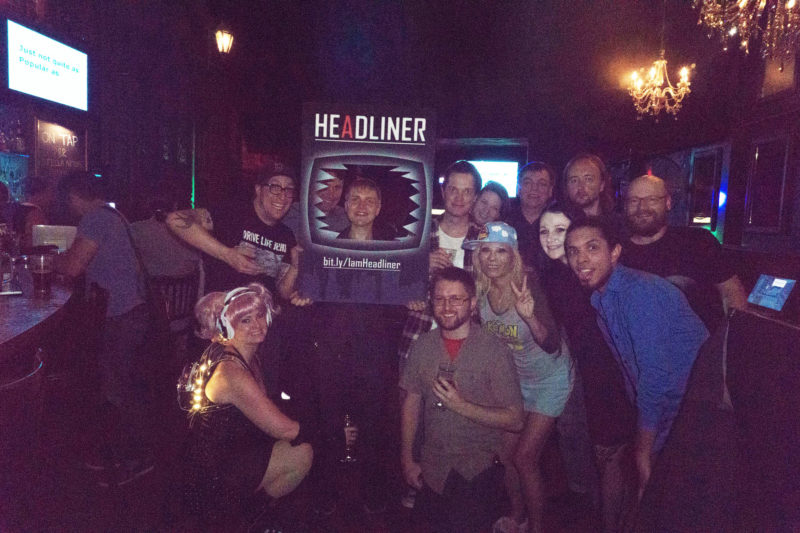 The event did not generate much of a buzz, to be honest, even with the hashtag campaign. Majority of those showing up were my friends who already knew about the game. Still, it was great to see all the diverse people that came out (including few friends who don’t even play games) and the support I have in the community here. Plus, the two guys who previously saw HEADLINER at iFest and decided to swing by again were a really nice surprise. 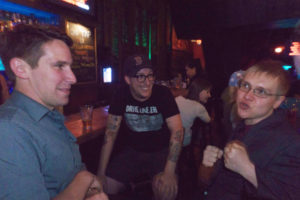 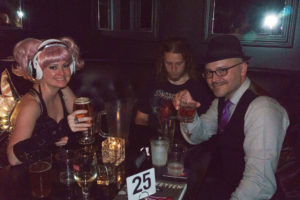 And special thanks to Lisa and Orchid from Hashbang Games, my two lovely PR ladies who help the magic happen.

Week later, I was exhibiting at Seattle Indies Expo, conveniently placed on the 3rd day of PAX West just two blocks away from the Convention Center. It was organized by Seattle Indies to share the fruits of local talent with all PAXcomers. 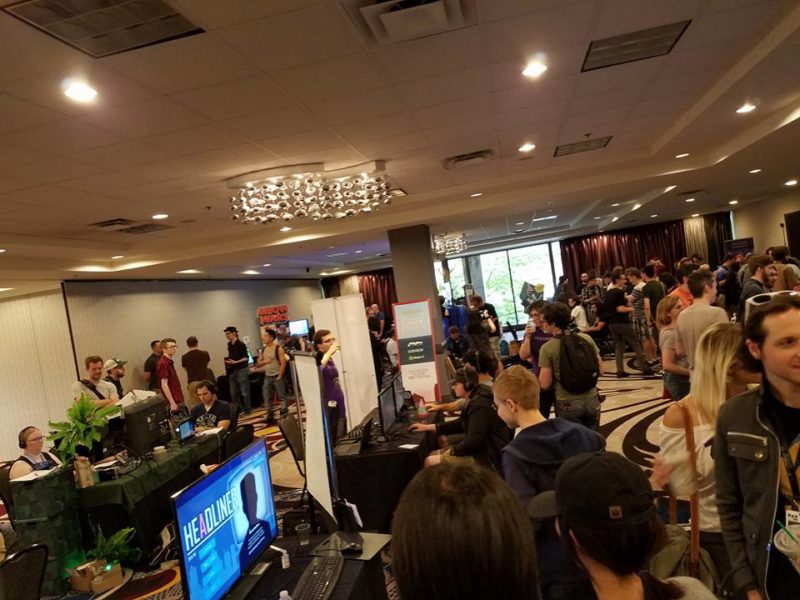 I showed up an hour before the opening thanks to a ride by my good friend Matt – because carrying a 40inch TV through downtown would have been less than ideal. I set up the big box on my table running the game in full 1080p, with an extra smaller laptop for doubling the play potential. I hung my poster on a $20 clothes rack (because screw paying $50 for an easel), pulled up two chairs to the screens, and awaited the madness.

By early afternoon, a good crowd was already gathering. In all the frenzy, I forgot to claim my lunch sandwich. Luckily, my other friend Emmy swung by to help invite players and hand out flyers, manning the booth while I went out for a desperately-needed coffee break. She’s an awesome artist too, so go check out her latest game Rakuen. I’ll wait.

At 6pm, things got really heated. With PAX closing, the crowds now migrated to our expo. Hot food and drinks were served. Food I once again missed out on, ill-prepared for the micro-management of my setup. 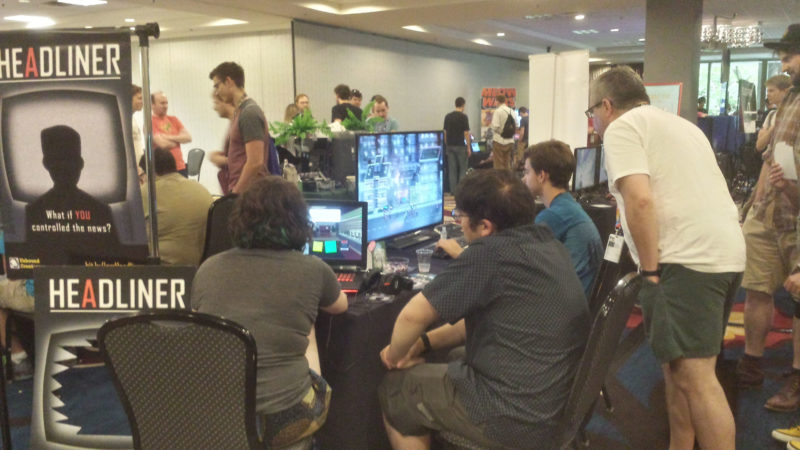 Given the busy crowds, I had to ask everyone interested to play only for about 10 minutes to give a chance to the next person. Afterwards, I would asked them to sign up for my newsletter. At first Alt+Tabbing to my website worked well enough, but the internet soon became overloaded so I switched to handing out my phone.

In retrospect, I wish I hacked my build to show a little thank you screen after the first day, with the newsletter signup directly there. That would have freed a lot of my time, already in short supply between pitching the game to the crowds and handing out flyers.

At last, 9 pm hit and the organizers went around giving us signs to wrap things up. Everyone reluctantly began taking their stands down, stalling for as long as we could. But one can only push the rules so far. I packed my gear into another friends’ car and we sped off to drop it back home before grabbing some late night and much deserved ramen. 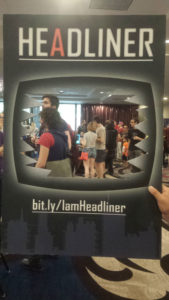 I do not know the exact numbers, but we definitely had a nice crowd. Someone was playing my game at both stations pretty much all the time, and I was surprised how many were willing to sign up for my newsletter. Impressions from the play-throughs were also overwhelmingly positive, with most critique falling into cosmetic or UI category I can easily tackle in the last month before release (spoiler alert: dragging articles is already in!)

As far as media exposure goes, there hardly was any. I think only about 4 or 5 twitch streamers stopped by the booth. I really hoped for more, but I’m grateful to the few who were interested. Showcasing a narrative-heavy experimental games at these kind of events is always difficult, especially when you have an even bigger TV blasting mortal kombat music on loop as I experienced two years ago at PAX South.

It is still too early to tell how much the event will impact my game’s future, but it was definitely worth the small cost. I got a lot of folks interested and confirmed the game has a really strong potential. As with the launch party, I had a few fans from previous events show up which was, again, a delightful surprise. Seriously, you guys make my day :)

The other upside is: I decided to keep the 40 inch TV I bought specifically for the expo. Working on the big screen has grown on me hehe! 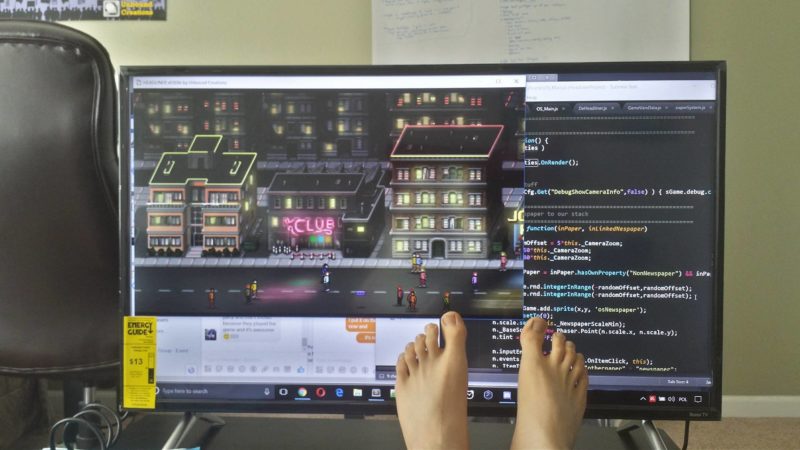 Nature of the Game

Before I let you go, I’d like to share what the game all this was for is about. Because if you got this far you have to be at least a wee bit interested, riiiight?

HEADLINER is a short media-bias adventure game where you control the news and its effects on your career, society and family. Multiple permutations of endings lead to unique experiences you can share with the community, and before starting you get to see the previous headliner’s story.

It is coming out on October 3rd, so why not add it your Steam Wishlist?