After four months it's time for some explanations. I've done a lot: a new inventory system, better player physics, more and improved build mode features like a level selection and the ability to grab furniture. Read the whole text to get even more information.

Long time no see. Four months have passed since my last news so it's really time for some updates. Here's a short list of the major things I've done:

I also have to announce rather sad news because I have to postpone multiplayer support indefinitely. Right now it's just too much for me alone to do but I will still keep it in mind so that I might be able to add it later.

I've bought the NGUI package from Unity's Asset Store in February 2014. At that time it was one of the best Unity GUI frameworks I could get. However, it also was a pain every now and then. I had a lot of problems with pixel perfection, depth sorting and the behaviour of some widgets. Don't get me wrong. It was a nice tool but now Unity's new framework is way better in my opinion. To reprogram every NGUI related code to use uGUI - as Unity's GUI System is called - was a piece of cake! Seriously! It still needs a lot of polishing and also has some bugs but I was faster and the code base is much cleaner and easier to understand than the one before. 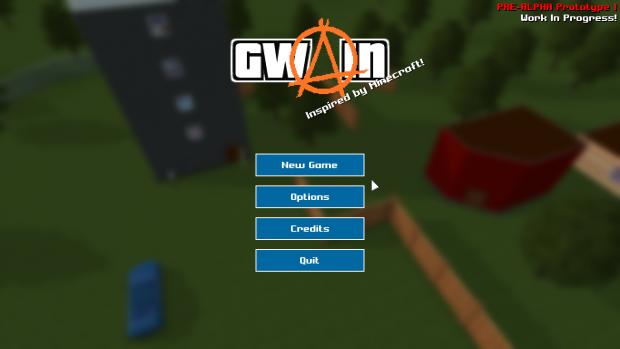 It's not just the main menu that is inspired by Minecraft. :)

Finally, I had to program a dynamic one myself. Based on the concepts of UFPS, i.e. a really clever event handler system, I've implemeted a basic character controller that is dynamic. You might ask: Why is it important to react to external physics? Because of the fact that GWAIN supports cars! Collisions with cars didn't move the player when I used the UFPS package, now they do.

There was an inventory system before but it didn't work as it should so it wasn't mentioned here. The current version works as it should, although it's still not complete. Many sounds are missing, the graphics are a work in progress and right now you can't use, craft or equip the items. However, you can store them in countainers and that's a huge step for me. 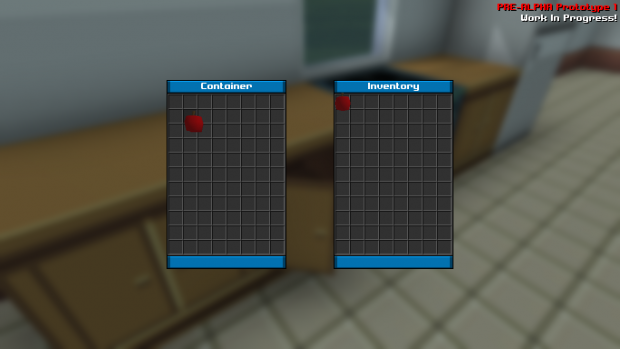 The red "apples" are just placeholders.

During the construction of buildings you now can hide floors above a certain level, i.e. you can see the inside of a building that you've already built to add or remove furniture, walls or similar elements. In addition to that you now have to "buy" plots to be allowed to build on them. Last but not least, the placing of furniture (or props as I call them) is more intuitive because you can grab already placed furniture to relocate it. 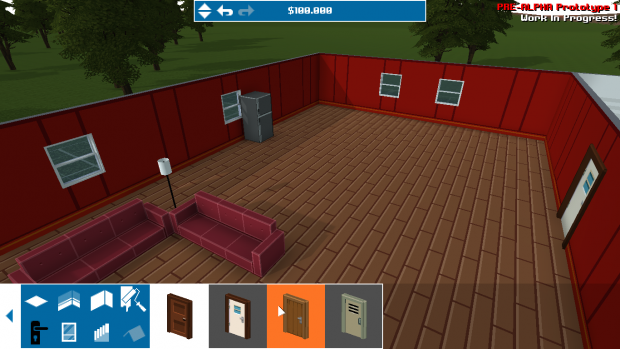 Unity's GUI System made it much easier to deal with 2D widgets.

Somewhere in the web in some forum I did get the feedback that it looks weird that my car has opaque windows and I've argued that I can't do it because of the time it would take to make a lot of cars with transparent windows and interiors. However, I now have to add that it also doesn't feel right because of the transition from a first person view to a third person view when entering a car. So I just had to make the windows transparent to be able to stay in first person mode. It also made me remove the cursor and unify the look and feel of interactions. Every object that you can interact with will go brighter when you hover over it.

Here's a video that shows many of the things I've mentioned above:

I think that I just have to justify why I postpone the multiplayer. Basically it's due to the complexity of the topic. The current plans for GWAIN are already difficult and time consuming enough. There are some reasons in particular that made me pause the work in this area:

Last but not least, it's a topic I got the least amount of experience in.

Now it's time for some information that didn't fit to the main topics because they aren't big enough.

I've redone the female model to be more comic like and to fit to the overall style of the rest of the game. However, while writing this text I realised that with underwear only it might be weird to show her like that. So you will have to wait for the next update, I guess. :)

Bugs in Unity: There are two issues in Unity that prevent me from releasing an updated prototype:

The Unity developers said the first bug should be fixed in Unity 5.2 but I don't know anything about the progress of the second bug. I hope it will go away at the latest when they upgrade their mono framework to the up-to-date version.

That's it for now. I hope you are still excited and that you are looking forward to my next update.

Keep up the good work. Don't strain yourself and just work at a pace that suits you and makes you comfortable with the progress. It looks great so far.

Pretty good game and concept. Building a great game takes time so don't worry about how long you take to make it. Keep up the good work.

Thank you, too. I'm glad to hear that you like the concept.

Greetings to a new follower. :) Thank you.

Thanks! Yeah, I will definitely keep an eye on this project.

good, keep up your work i will follow it

So you guys dooooo updates this ;) Looking better and better :)

Yeah! I'm currently working alone, so it might take some time for updates. I'm glad that you like it, though. :)

"It will try to combine Minecraft, the Sims and GTA!" I always dream a game like this. Keep going it's gonna be awesome ! :D

Thank you! :D Sorry for the delay. I thought replying to every comment would appear silly but I didn't know that replying would also authorize anonymous comments.