NPCs tracked around the world, history and importance of NPCs, delegates for democratic nations, etc!

Posted by UltimaRatioRegum on Oct 18th, 2015

Major progress on important NPCs this week! We now have all NPCs correctly linking up with their abstract selves, the game correctly listing and assigning historical and interconnected importance (if any) to all important NPCs before they are actually generated (from slaves to kings), the delegates/representatives for democratic nations being generated and tethered to a home district/town/etc, minor vassalage families are spawning, and early progress has been made towards even the generation of castles! Read on…

Firstly, the game now selects a lot of new important things during world generation; or rather, it has always done this and then stored “keywords” and information so that specific areas can be generated later if/when the player sets foot in them, but this has now been expanded to every NPC who might be important. Therefore, the world at generation decides precisely how many servants live in a given mansion, for example, and how many mercenaries live in a mercenary guild in a certain city, and so on. The map I showed last week was partly complete in this regard but was lacking a bunch of other important NPCs I had actually forgotten about, but I believe the game now generates them all correctly. This means all guards are generated at world gen, along with all other obviously-important NPCs (like rulers) and a small number of other NPCs (like slaves, servants, prisoners, etc) who are then intermingled with non-important versions of themselves.

Since new important NPCs have been added, take a look at this new diagram – you’ll see that there’s now a bunch of important NPCs spawning in towns, settlements, more in cities, all over the place! Much more colourful and much more variety, and shows that not everyone who matters lives in a city… 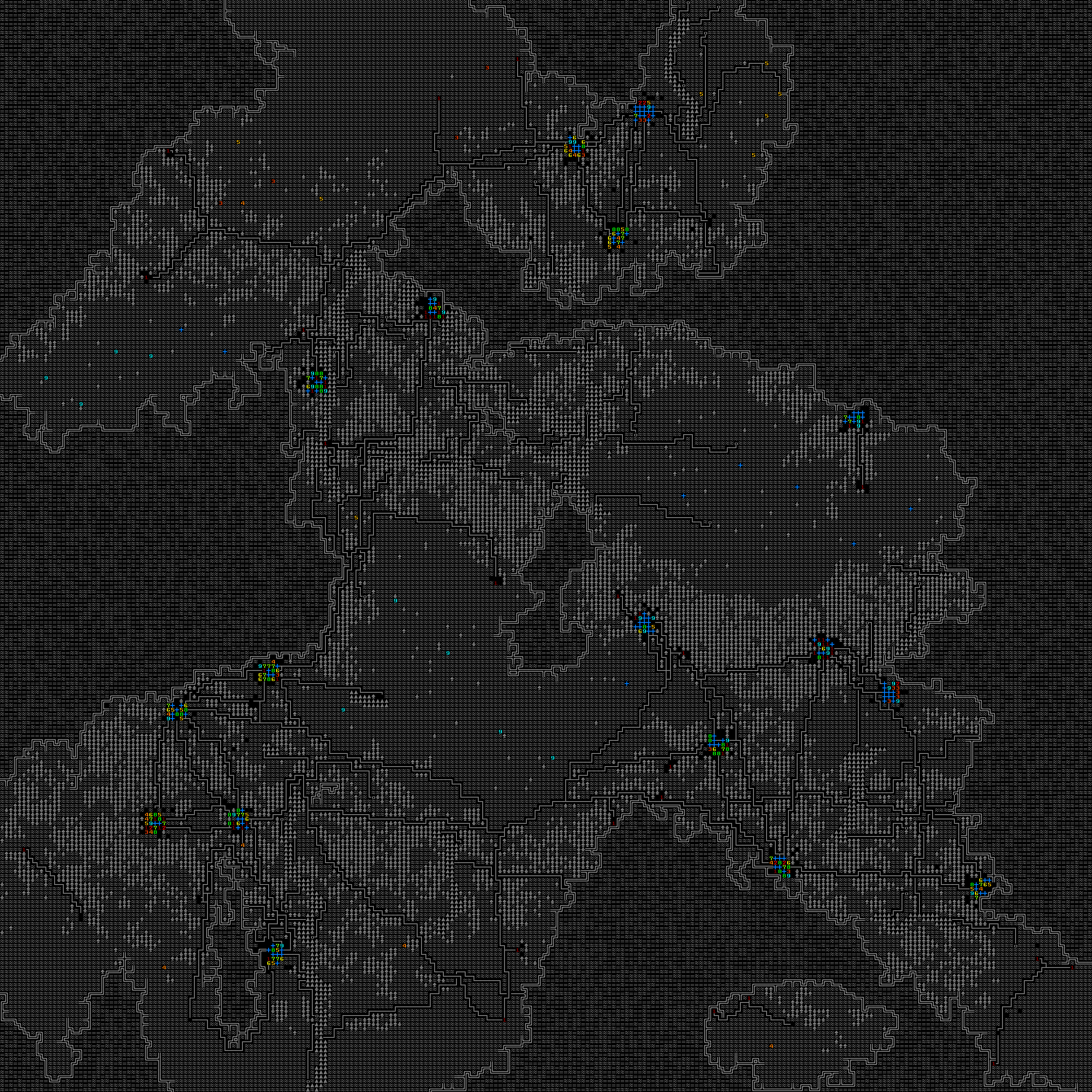 The game can now assign “notes” to each important NPC, notes which might be referenced elsewhere in the game and will determine some of the unique things you might be able to do with each unique NPC. Examples include whether that NPC is involved in a plot, is secretly a worshiper of another religion, has an unsolved crime to their name, fought in a war/wars, is corrupt or embezzling somehow, what other important NPCs they’ve met, where they traveled, and so forth (and also past-tense examples for all those I wrote in the present tense, so an important NPC might have been involved in an un/successful plot in the past, but is not involved in one currently). This will obviously develop far more in 0.9 onwards, but the basic framework is now in place for meeting a merchant in one place, who tells you about a plot he overheard involving someone in the next town over, then finding that person and encouraging them to give you information about the plot, and discovering it is being lead by a number of political delegates who all secretly worship another religion, and then finding out a list of delegates and trying to decipher who it might be, and finding out this plot may be attempting to put a particular person on the throne, a person who – as someone else told you – may just know the location of one of the items you’re seeking…

I turned back to the democratic ideology choices this week and added a nice bit of extra detail here. There is now a new NPC type, the “delegate”, shown for now with an “a”, and each democratic(ish) nation will have a selection, depending on how many seats there are in their parliament. Once the game knows this number, it then carries out a reasonably complex equation. The game counts up how many towns, monasteries, and districts there in a nation (say, 4, 2, and 18), and then attempts multiples alongside each of those (1,2,3,4) for how many representatives there might be from each town/monastery/district, and then attempts to get that as close to the target delegate value as possible. If it hits it directly: great. If not, then the game gets as close as possible to that value, and then adds in a few extra delegates which belong to the major families, the military, the national bank, the national religion, or some combination, depending on how many “extra” delegates are required. This obviously produces a lot of variety – in some nations each monastery has two delegates, each city district just one, and each major house two; in another maybe each city district has two delegates, but the military fields six of its own delegates, and the bank a couple too. Delegates have been given (temporary and very basic) schedules for me to test in the coming week getting them all moving correctly around the world map. Here’s an example map of nations with the “representation” ideology (in white) and their distribution of delegates, who will all be scheduled to come together to the parliamentary building once every X weeks/months/etc: 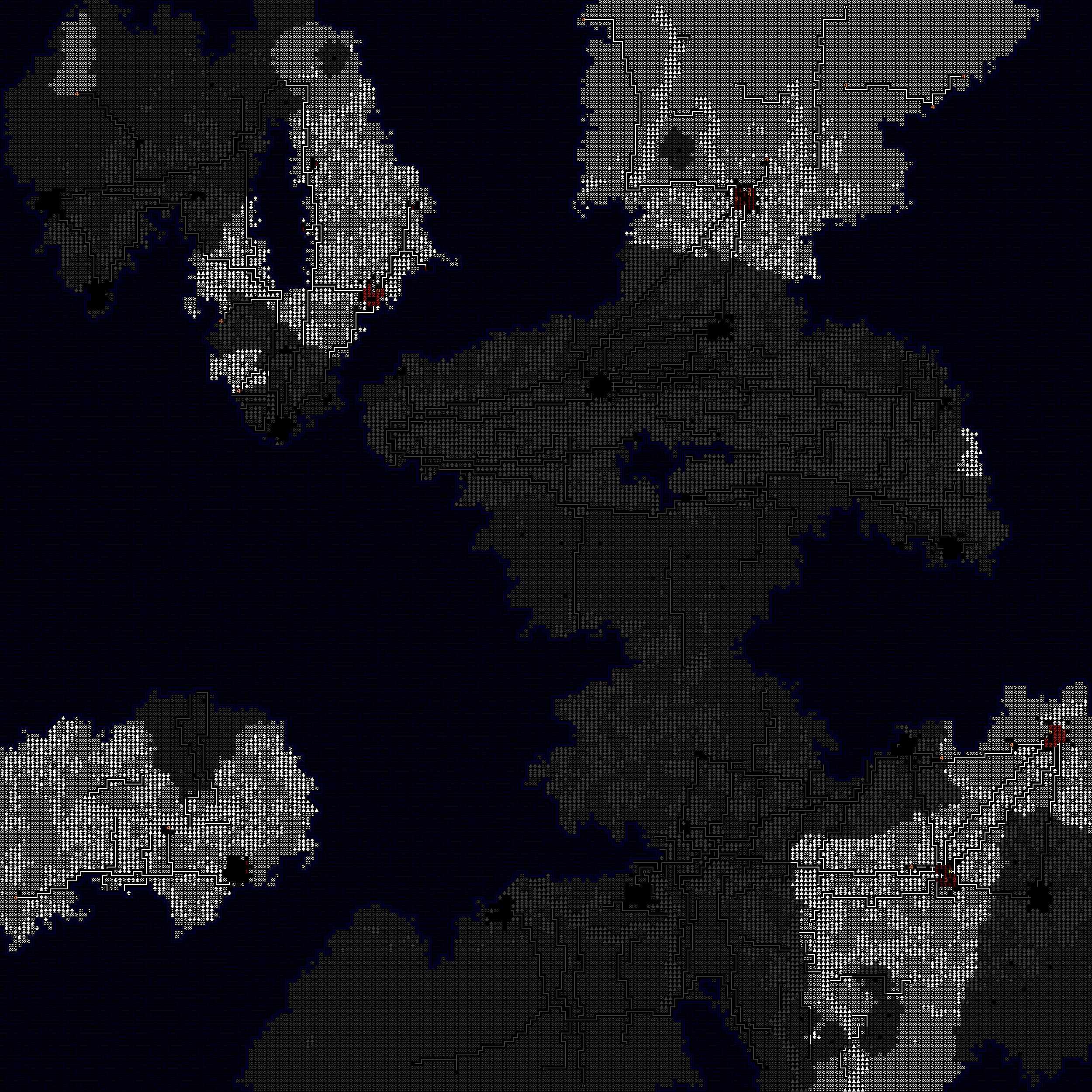 A minor thing – I noticed that all road curves were curved, and that doesn’t really stick with the whole geometric-aesthetics thing, so road curves now vary, just like almost everything else, depending on the nation they’re found in. A truly minor detail, but once I realized it, I just had to fix it. The octagon and diamond inevitably look similar (the octagon just has less diagonal), but still: 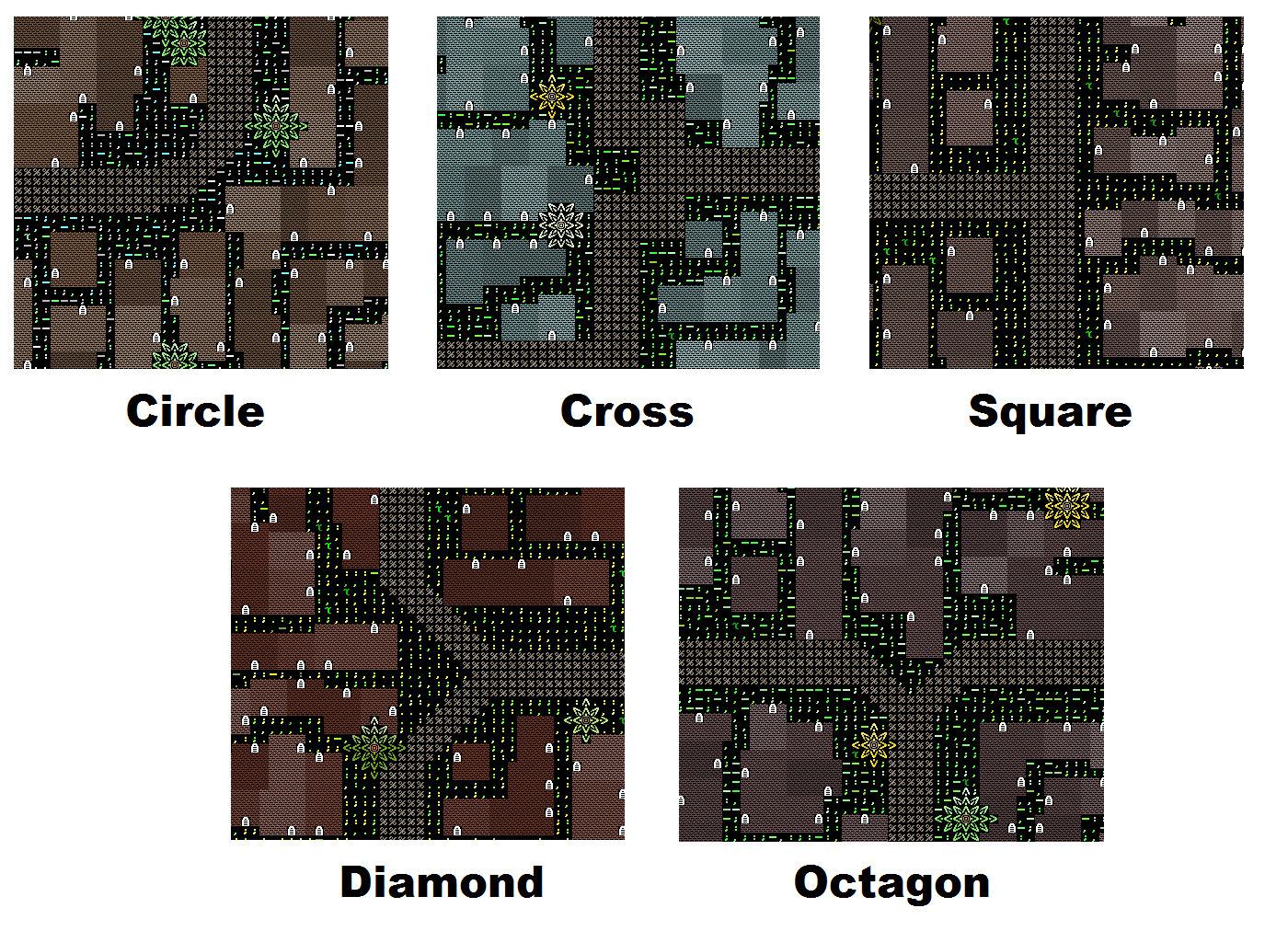 On evenings when I didn’t have enough time to sit down and really do a lot of this complex scheduling/technical stuff, I started work on castle generation and, although it took a long time to figure out how exactly this was going to work, I’m very pleased with the initial results, and I’ll definitely have something to show in this regard in… two weeks? Something like that. But here’s a little hint of some castle walls, a gate, a moat, and is that… is that something which might become a DRAWBRIDGE?! 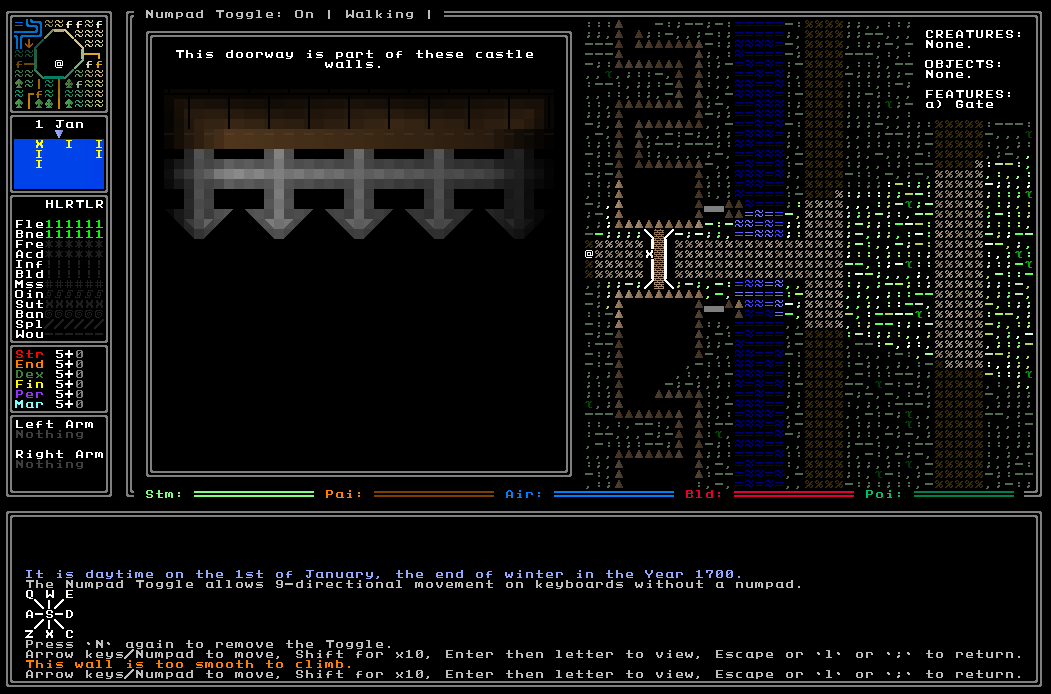 The game now spawns an appropriate selection of lesser houses for nations with the “vassalage” ideology. There’s a longer blog post in the work for the future about how I’m reworking these for 0.8 and the new variation I’m trying to add to all the nations as a result, but that’s a future thing; nevertheless, these now appear, and each is given a town to rule; in the very near future I’ll be expanding this so that a “county” appears around each town which each family rules, and all the farms and whatnot within it, which is the area that vassal then controls. Still not quite sure how the mottoes for these lesser houses will generate, but I’m sure I’ll come up with something acceptable in the near future. 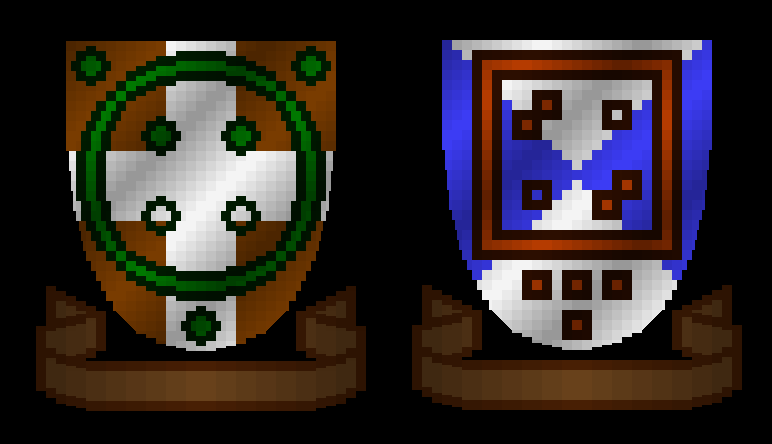 Well, by the end of next week I hope to get the important NPCs moving and scheduling themselves around the map, even if only in a very basic state, and to have significantly more progress on generating castles, and hopefully to allow you to follow and track important NPCs whether they are”abstract” – i.e. the player hasn’t yet gone close enough to them to pawn them – or “real” – i.e. the player has gone close enough – and these NPCs should carry out their schedules regardless of whether they are on the other side of the world, or directly in front of the player. That’s a pretty big ask, and I’ll be busy for much of next weekend, but I’d hope for the first steps towards it next week. I’m also drafting out in the background a few other improvements to the policies system (which is now becoming “ideologies”, as that is far more descriptive of what I’m after here), extra variation in each nation, and also some thoughts on ambient flora and fauna and making those a) more interesting and b) actually exist, respectively. I’m also now strongly leaning towards saving up both NPCs and conversations for a big release, as DF did that a while ago and it seemed to work out fine, and I know it would be worth the wait… I know I mention this debate every entry at the moment, and I still haven’t 100% decided, but I’m about 95% on the “save it up for an epic first release” side of things. Either way, see you in a week!