In which the language-text is (I think) finished; lore-art is added; a new lore-entry is written; level two sees some minor additions; my build-script is updated; and the side-project tile-editor gains some neat features.

For this week's screenshot, an icon for a new piece of lore: 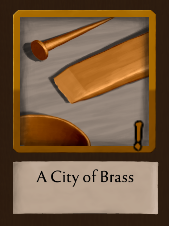 The week just past saw a few fixes, additions, and bits of polish:

To start with, I continued to work on the language-text system that I believe that I mentioned last week--there were a few things left undone, and a few bugs found to fix.

And overall, I believe that I have the system working properly now!

On the art-side, you may recall that I mentioned last week that I had added a new lore-entry. In the week just past, then, I added art for it, both a lore-icon and a page-image. I'm quite happy with the page-image in particular! ^_^ 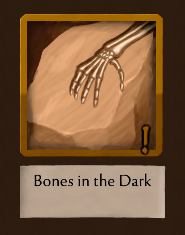 The lore-icon was at one point a little more saturated than shown here, and as a result, it "popped" quite nicely. Unfortunately, I found that it "popped" rather more than the other lore-icons, and I thus felt that it commanded a bit too much attention! Hence the slightly paler version now in use, and shown above, and which I feel fits in alongside the other icons rather better.

Still on the topic of lore, I added one more lore-entry to be found in level two. Like the one reported last week, this is a brief piece of world-building, rather than a short-story.

In this case, it's history; specifically, the relationship between the city of Tenereth and brass. Why, after all, are all the tools found in the under-city brass? Why not tougher steel? And is it still so in contemporary Tenereth above?

The page-image for that is still very much a work-in-progress, but as shown in this week's main screenshot, the icon for it has been painted.

Related to this, I made a few (minor) additions to level two itself: The various brass tools found in the woodworker's workshop are now examinable, and have logic connecting them to that new lore. And while I was at it, I also added a stone of a sort mentioned in the lore-entry, used by workers to straighten their tools.

Moving towards the demo, I updated my build-script a little, reflecting some of the recent changes.

And finally, the tile-editor for my side-project has picked up some neat features: One can now add rectangular groups of walls by dragging, and have tiles coloured to indicate which scripts apply where, for two examples.