Post news RSS I Am Overburdened, what is to come

Been pretty much out of touch with the online world in the last few weeks. So I guess it is time to break the silence with an I Am Overburdened update (version 1.2.7.) and some news about the expansion :) ?!

Been pretty much out of touch with the online world in the last few weeks. So I guess it is time to break the silence with an I Am Overburdened update and some news about the expansion :) ?!

Showcasing version 1.2.7. will be short as it is a refinement build. Nothing spectacular, just a bunch of fixes and tunings.

There was a problem limiting the mouse movement which occurred on non-default DPI settings and/or high desktop resolutions. Now it is fixed and there is no need for using the workaround posted on the community forums of the game.

To fix the confusion around the monster unlocks I've added progress visualization. You just have to kill a single monster from a given kind and then you can check how much more of it you have to fight to successfully open detailed information about them. As a tiny addition mouse-wheel scrolling is also supported in the book (forgot to add it in the last update).

To make the item selection more streamlined in treasury mode I moved the "Random artifact" option to the first slot and implemented in-game inventory highlights based on the currently focused item. It works the same way as with other pickups (e.g.: in the shop). 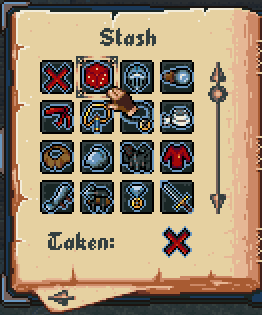 Repositioned the random stash item selection too mainly for consistency.

It's almost at the finish line, but not properly baked yet. Let see what it already brings to the table!

The original boss fight feels underwhelming to me mechanically. I like how the story, the characters, and the outcomes turned out, but the fight itself is a bit lame. More like a randomized stronger special enemy and less like a boss :|
I decided to introduce 3 new completely different scenarios, to keep you on your toes while battling the Buzzard wizard.

As you can imagine the new fights will not only make the conclusion of a run more varied, but new strategies will be possible and the value of many existing items will be altered.

More than a dozen new items will find their way into the expanded version. I haven't settled on the final number yet, but at the moment it is close to 140 artifacts total :O ! They will introduce new skills and allow way different strategies especially on the early levels (e.g.: stash choices) and in the end game (e.g.: boss fights).

Another goal with the new set is to introduce more synergies and heavier focus on "neglected" attributes (vitality and defense) too.

All the 5 new creatures planed for the update pack are ready to be released. They will work as "variations" of certain enemies. Kind of like mobs in many other dungeon crawlers. In some runs you may encounter the "Leach", in others, you will have to fight the new "Ooze" in the sewers instead. Of course, you'll be able to unlock info about these variants the same way.
This system besides making the existing game more varied will be the foundation for adding even more monsters in the future ;)

These changes are still a bit WIP and subject to change, but they are now in a shape where I can reveal them:

All that is left is the when and how!
I really wanted to let this package loose this year as a Christmas present latest, but I'm not 100% sure I can do it. Will try my best and in the worst case, it will be an early new year's gift :)
I settled on the pricing though. Essentially it will be a free DLC. But! I'm going to charge more for the game once it is out in the wild. Only raising it by a few bucks, since charging 10$ for it would not be reasonable.

Thank you very much for taking the time to read my post and thanks for your continued support.
Stay tuned!

I Am Overburdened Roguelike
Related Engines