After being dormant for so long I Am Overburdened Version 1.2.1. is live. The game has been localized to German and Spanish and with this second set of official translations now it supports 7 languages!

Maybe I should start with some rambling about why I've been dormant for so long, but I want to jump right into the details of the latest I Am Overburdened update I've just released. I'm leaving the boring bits to the end ;) !

Version 1.2.1. has a plethora of changes, but most of these are fixes, tunings and other tiny additions. All in all it is not THE huge content update I've been teasing, but it has a bunch of nice things I hope many will appreciate.

The game has been localized to German (

...). With this second set of official translations the game now supports 7 languages :O ! Hopefully this way even more players will be able to enjoy the wacky descriptions and dialogues :) I would love to add even more in the future, but I can't make promises yet as these take time and money. Will try my best.

Special thanks to the translators for their work:
Nico Weiß (canemus): German, Juan Buleo (PsychoKurt): Spanish

When I Am Overburdened launched it lacked proper mouse support. I patched-in this feature shortly after and I tried upgrading it ever since, but there are still a few ideas left worth pursuing.

The menu book graphics were improved with a simple trick and all the screens received separate "Back" and "Close" buttons. This way it is way easier to navigate them (some menu "stacks" were quite deep) + now it is possible to move around with only the left mouse button easily. 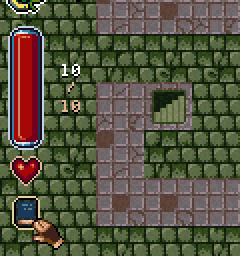 There is a new book icon under the health-bar for opening the menus. Again this allows left mouse button only navigation during play. 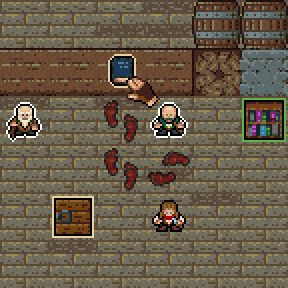 The same way the user interface needed some changes to better support controlling the game with mouse only, the inn had to be updated a bit to accommodate. I added a journal next to the innkeeper which can be used to access the main menu.

Many players claimed that they did not notice the "Stash" in the inn and had no idea about collecting starting items. Mea culpa, this was a big design error on my end. Now when it has items in it there is a smoke effect triggered when entering the inn similar to the ones accompanying other unlocks and play variants. Hope this helps in discovering the unlocked starter items.

Besides adding new languages a lot of localization fixes found their way into the game. Layouts of the menus were changed a little to make translated content better fit them. I also increased the item pickups notification time for longer fluff texts as translators suggested.

A small balance change was applied too. The luck penalty on nightmare difficulty has been decreased to 3 from 5. It is not a heavy impact modification, but it does make nightmare an itsy-bitsy less luck based.

I made a mistake in the underlaying path-finding system which caused a rare but weird issue when controlling the player with the mouse. Fixed!

That is all for this update, but soon more will follow!

Sadly In the last six months I had to face a lot of difficulties (financial, personal and housing/moving related). Due to this I left the game hibernated and as a result its community dwindled :(

I really wish to do a 180 on this. I'm going to have free time for making updates in the upcoming months and I already re-organized my TODO list and plans. I'm also working on a somewhat "new" project pretty closely related to I Am Overburdened ;)

To sum it up, I really had neither time, nor money or energy to work on the game. Thankfully it looks like now I'm on track to complete updates I've been dying to deliver for months now :)

Thanks for taking the time to read my post.
Stay tuned!

I Am Overburdened Roguelike
Related Engines