This week Miner Threat turns into a real game that is actually playable!

This week I actually sat down and played the game. After three months of development, I lost sight of what Miner Threat really is: a game. I always think of it as a project, not a medium for people to enjoy themselves. I mean, I designed it for two players so I could sit down with a friend and have a fun time with some rogue-like platformer action. But for the first time in 3 months, I sat down and played it for fun. While playing I noticed 3 things:

So this week I addressed those things and then some. First thing was the bombs, because it's the easiest. For those who don't care, I fixed it. For those who do, I can explain the weird bug. So when exploding, the bomb would loop through all walls on screen and check if they are x pixels away from it; and if so, destroy it. But every time I destroyed a wall the instance count dropped one therefore skipping the next wall. So it is still the same thing, but instead, the wall id's are put in a list then destroyed at the end.

I also stopped being a ShareX noob and turned up the GIF FPS so it doesn't look like complete trash.

Next up was levels -- as in there is only one. So I stopped putting it off and got started. Miner Threat is a roguelike, and therefore doesn't need more than one room to actually play. So when you enter the door at the end, it gives you a rundown, then restarts the room, generates a new cave slightly different from last time because it's the next level, replaces the enemy place holders, and sticks you in it.

It's simpler than I let on.

The last (Major) issue is medkits. The game is hard. So now enemies drop medkits. Not much explaining to do there... 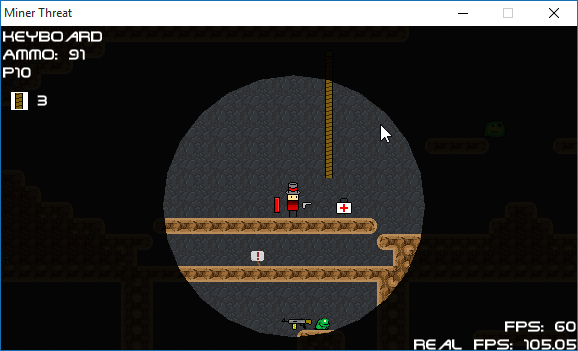 I like how the enemies basically walk off the platform. (Top right) I'll have to fix that...

So in conclusion, there's still a lot of work to do, but this game is going places.