Find out more about some of the monsters you will encounter within Heroine's Quest: The Herald of Ragnarok, as well as how combat works, and the game's overall interface.

Heroine's Quest features eleven different monster types which you can come across and fight via random encounter while wandering around the game world. Here, we present some of the monsters which you can expect to come across in the game, and discuss combat and the game's general interface. 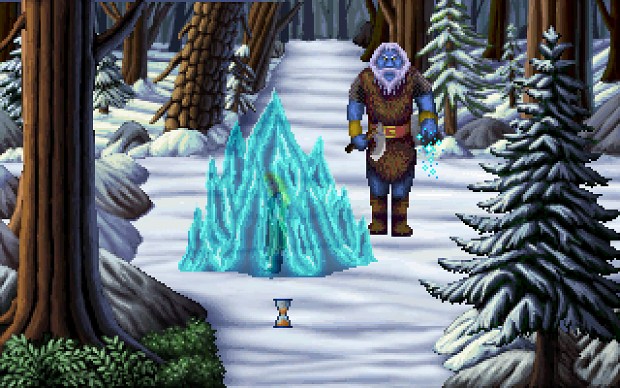 What monsters are present in Heroine's Quest?

Brigands
There are usually wayward raiders looking for easy pickings throughout Jarnvidr forest. During the Fimbulwinter, they have become more desperate than usual, and will gladly fight you for your belongings.

Vargs
A large wild wolf with a terrible howl, it scours the woods looking for prey to satisfy its hunger. While even a single varg can be dangerous, they also hunt in packs and will stop at nothing to tear you down.

Trolls
Trolls are aggressive humanoid creatures who usually live in caves. They are known for their intelligence, or lack thereof, varying from dim-witted to as dull as a brick. Trolls only wander the forest during the night, as they turn to stone when exposed to daylight sun.

Giants
There are three types of giants in Heroine's Quest. The best known giant is the jotunn, also called frost giant. These are ancient enemies of the Aesir (the Gods), and while most have been banished to Jotunheim, some remain in Midgard who have sworn vengeance on all humans.

So how does combat work?

Combat occurs randomly while you wander around the woods. You will see the combat enemy walk on screen and start to pursue you. If the enemy reaches you, combat begins, and a combat UI pops up. 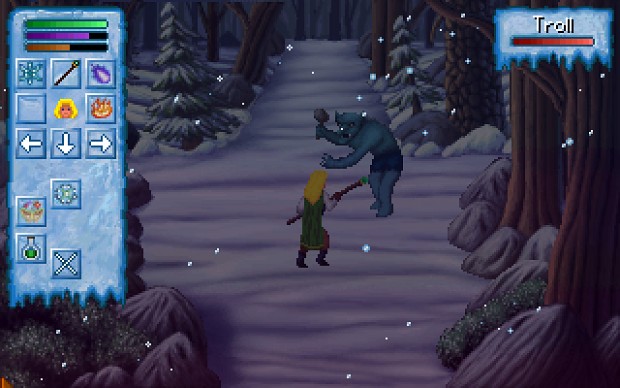 Combat is real time. If an enemy lunges at you, you can avoid being injured by dodging, parrying or blocking (if you have a shield) its attack. Likewise, the enemy may also dodge or parry your attacks. You also start off with some basic attack moves, such as a sword or dagger thrust. The sorceress also starts off with a basic magic spell. As you progress through the game, you can learn extra moves or spells, and these combat skills will appear on your combat UI as you learn them. Potions may also be consumed while in combat, as long as you are carrying them in your inventory.

Several monsters also have a special move which deals extra damage or disables you. Some of these special attacks can be interrupted if you are fast enough. Be very careful when your opponents begin preparing their special move!

If your character is dropping low on hp, you also have the option of escaping combat and running away. The enemy will stop pursuit if it loses sight of you.

In a short answer - the interface is similar to Sierra style vga interfaces of the 90s. However, for ease of use, keyboard shortcuts also exist, though the game is primarily driven through 'point and click'.

Most character actions are performed by cycling through 'look', 'hand' and 'walk' cursors via right mouse-click. The main command bar is accessible by moving your mouse to the top of the screen. 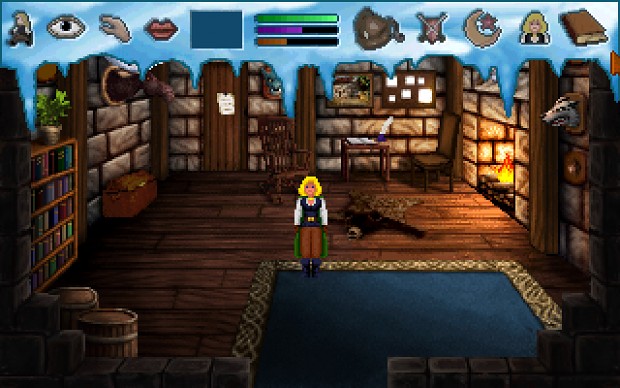 Sub-menus include an interface for actions including resting, sleeping, jumping, or bringing up your map. Note, these additional actions can be performed through keyboard shortcuts.

An additional interface is present for spell casters. Spells which you have not learned yet remain as cryptic runes, until you learn the spell. A keyboard shortcut also exists to re-cast the last spell you used. 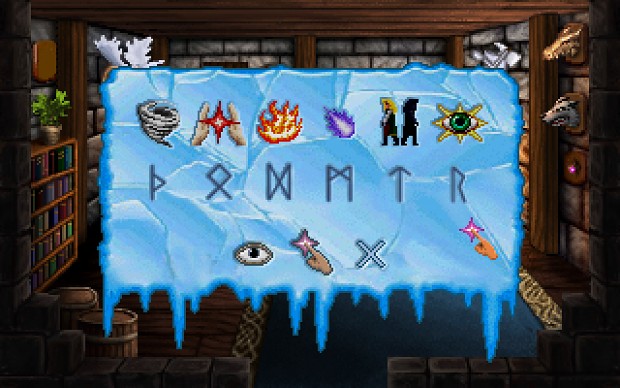 I want this game. Right now! Shut up and take my money! XDDD

Guest - the game is free! But if you really insist, we do accept Paypal donations through our main website at Crystalshard.net :)

It'll be out in due course, just be patient while we get as many bugs ironed out as possible!