We've been quiet the past few months here on indieDB, why not take a look at all the new things coming to the game?

Hello starchasers! It's been quite some time, seeing as our last update on this site was near the end of July. We're not dead though, far from it! If you aren't aware, we've had extensive monthly devlogs posted each month on both Kickstarter and Steam. You can follow along with all the Underspacey progress stuff there.

However these updates haven't been propagating onto IndieDB. And that's partially my fault, as I wasn't quite sure how to properly phrase these updates, and whether or not to copy them wholesale or paraphrase each monthly devlog. Either way, I've been dragging my feet a bit. So, without further ado, let me give you a whole course on the massive amounts of stuff that's happened since the Kickstarter concluded. Buckle up, homestuck, because it's gonna be a looooong ride.

One little note though, I think I have mentioned it before but updates to demos will be much more infrequent, this particular update (demo 1.5) is going to be released once a certain feature is implemented.

As stated in patch 1.4, the game's trading and customization UI was overhauled to be far jucier and just be all around better than the old trading UI. With it in place, we decided to go back over each UI window (such as inventory, reputation panel, crafting panel, etc) and brought them all up to a single uniform standard while giving them a gargantuan amount of new features. From additional filters, interaction histories, proper lifetime stats, 3D previews, as well as tons and tons of bugfixes. In fact, there's so much stuff to cover when it comes to the UI that it's hard to put it into this update, and your option is to look through the full update for it on Kickstarter. 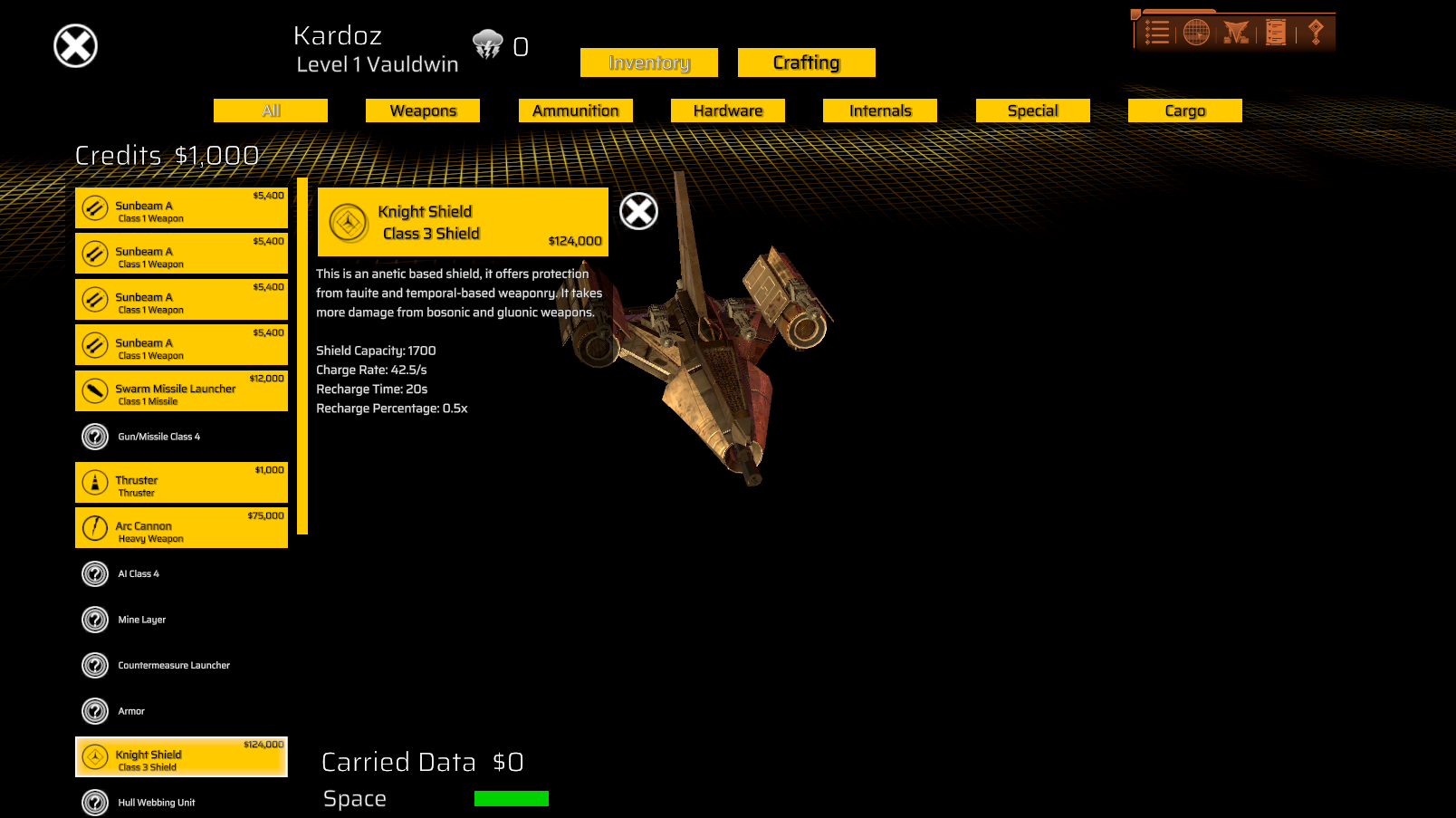 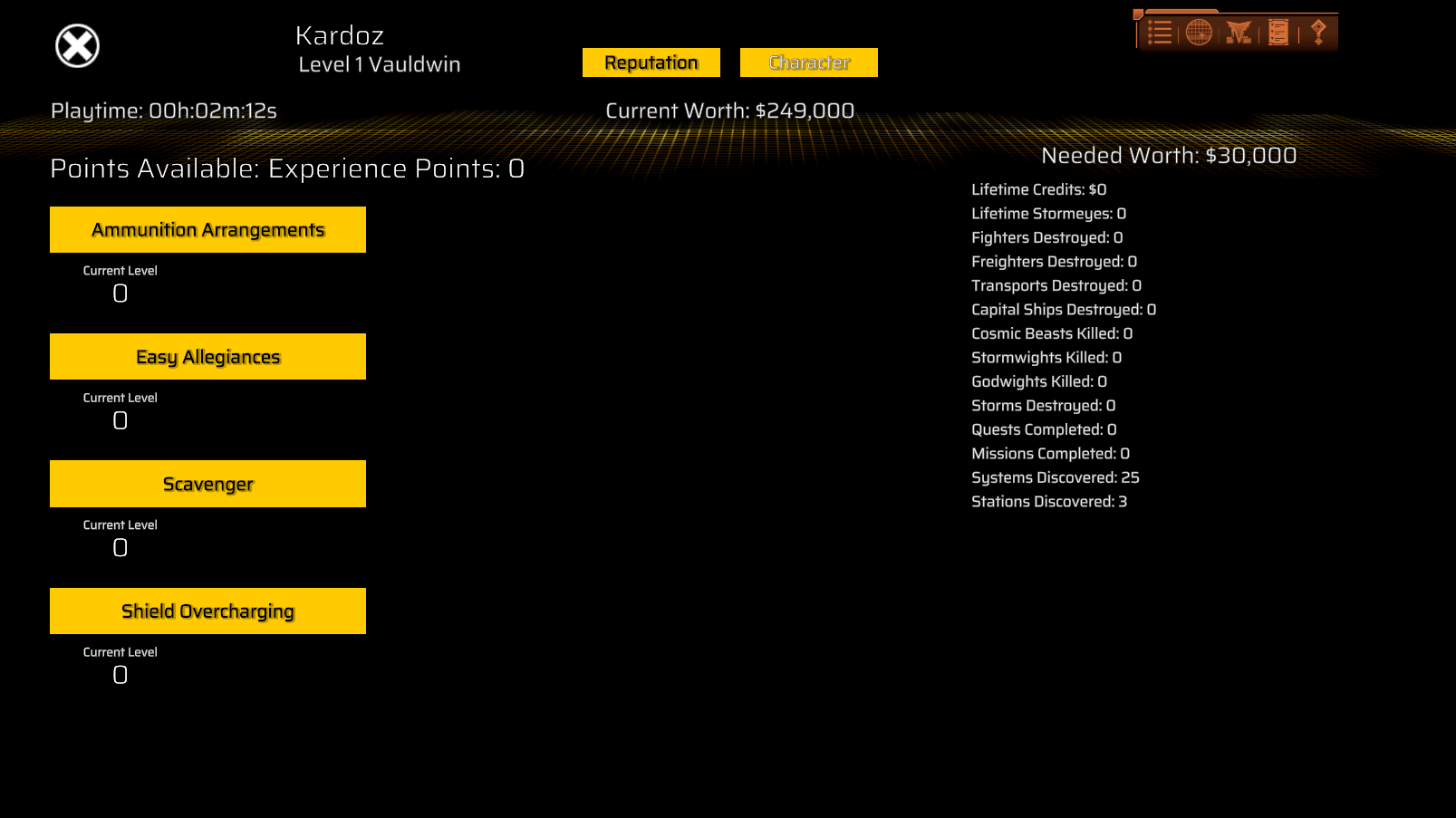 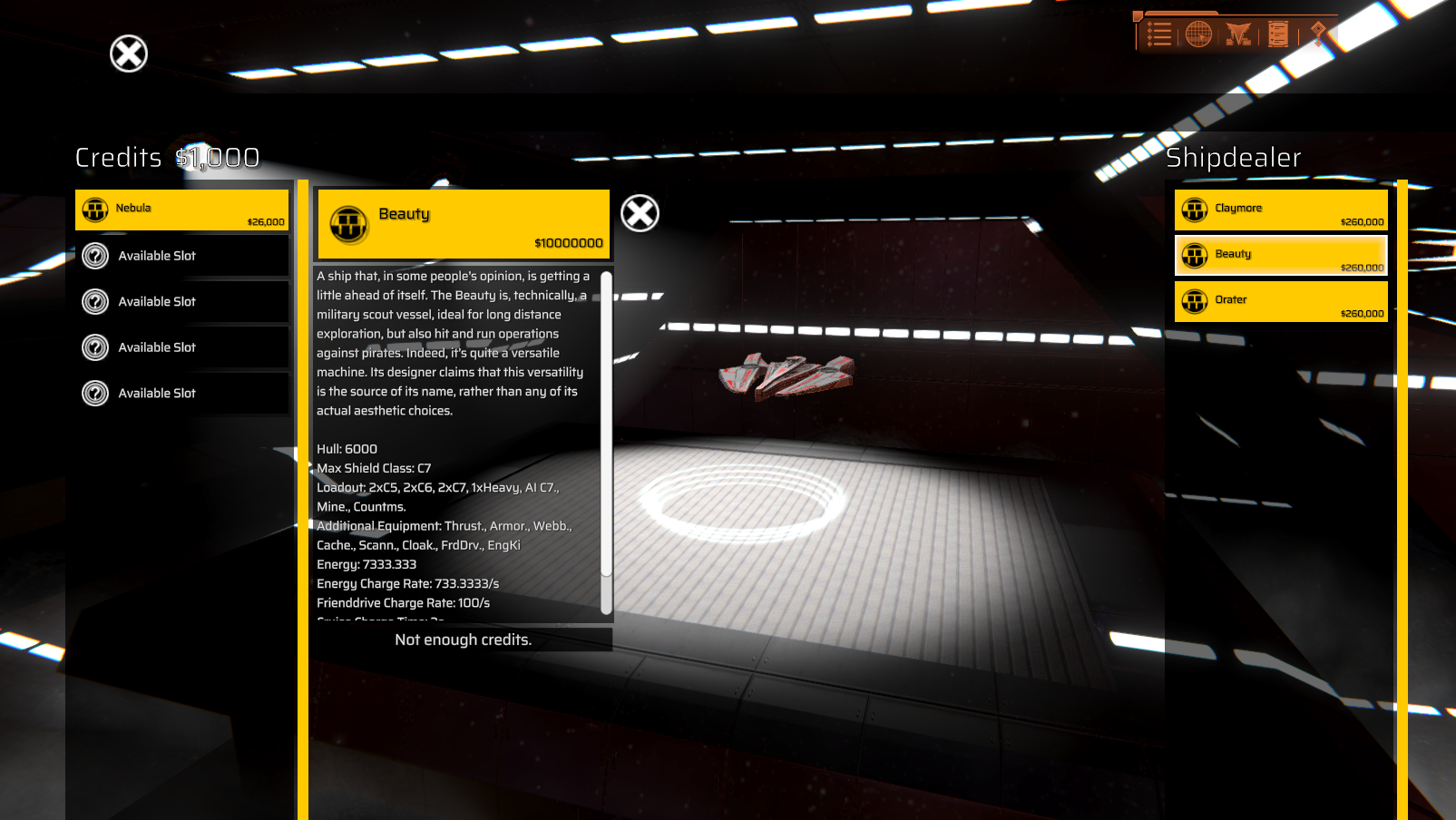 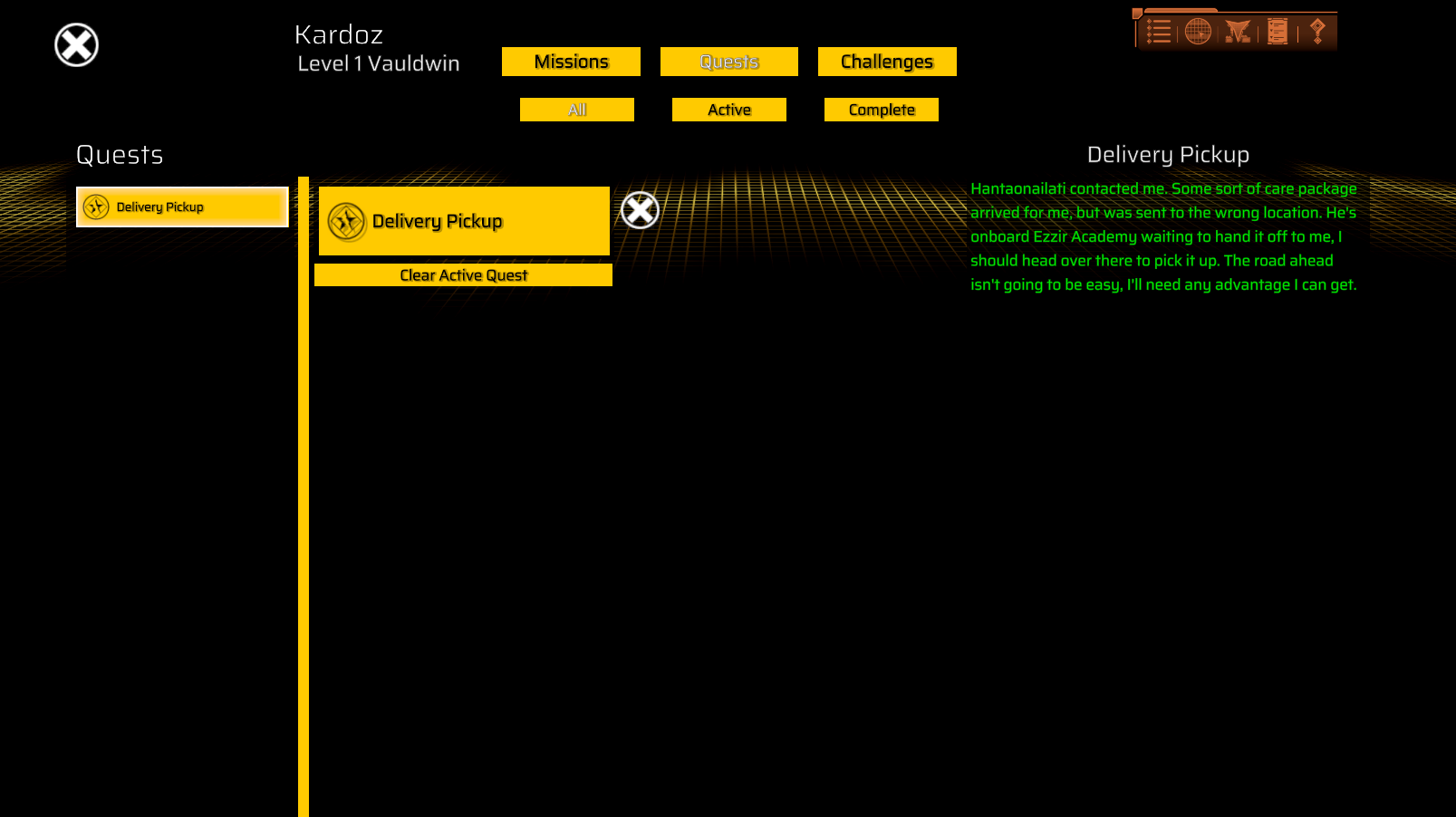 Of course that's not all. Your heavy attack bar plays an animation and sound when fully charged, landing on stations displays a pop of the station you've landed on, and much much more.

You'll notice of course that these assets don't always match up with the normal gameplay HUD, but fear not: In the coming months they'll have an overhaul to bring them up to date visually.

As stated, all fighters in Underspace were in and flight-ready, but many ships were not. See there's more just fighters flooting all about in the galaxy, you've got freighters, capital ships, bombers, schoolbuses, etc. In the past few months I worked on getting the greyboxed models for all freighters in, and also implemented. They're big and bulky, but what they lack in mobility they make up for in space and utility. 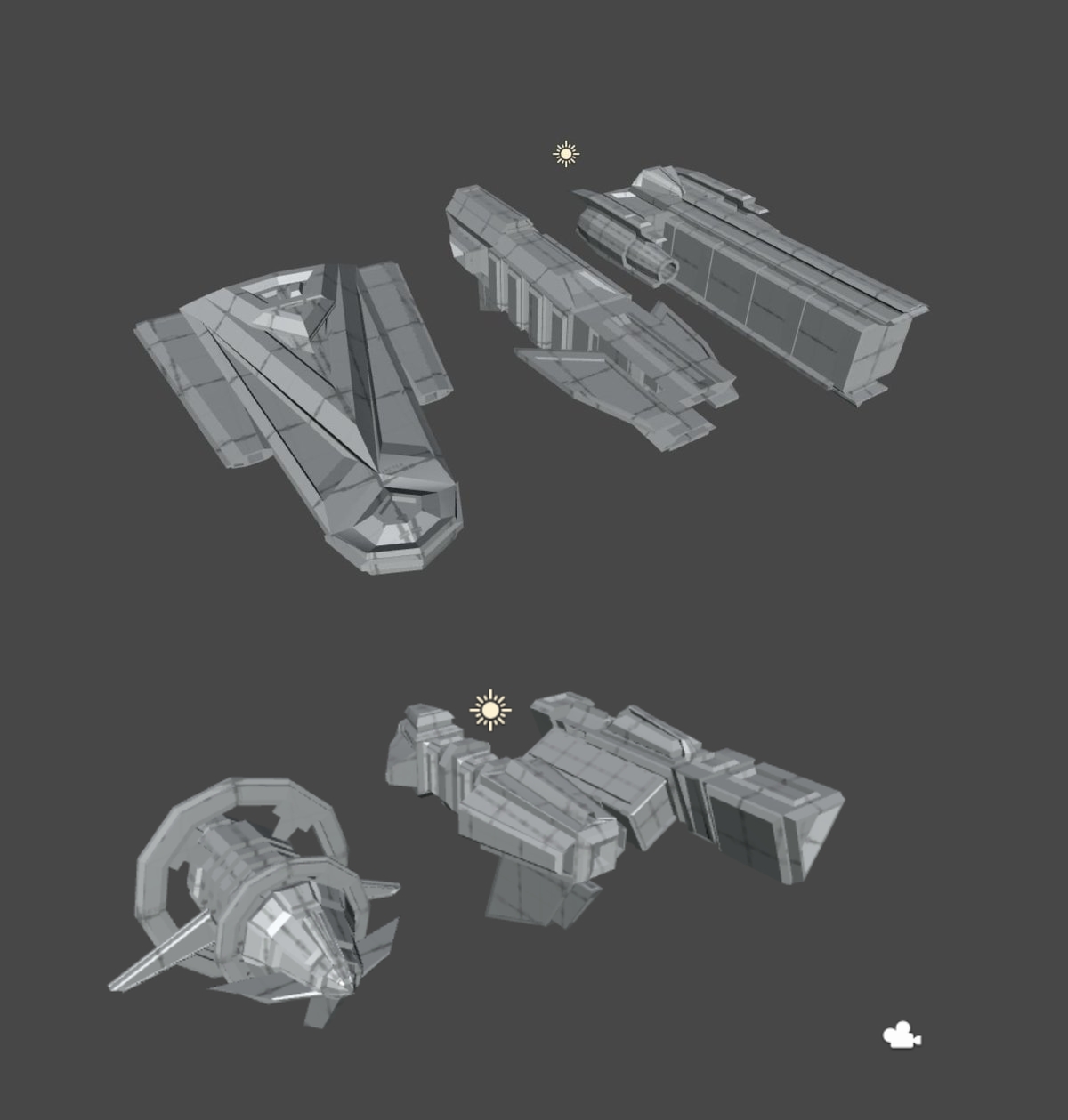 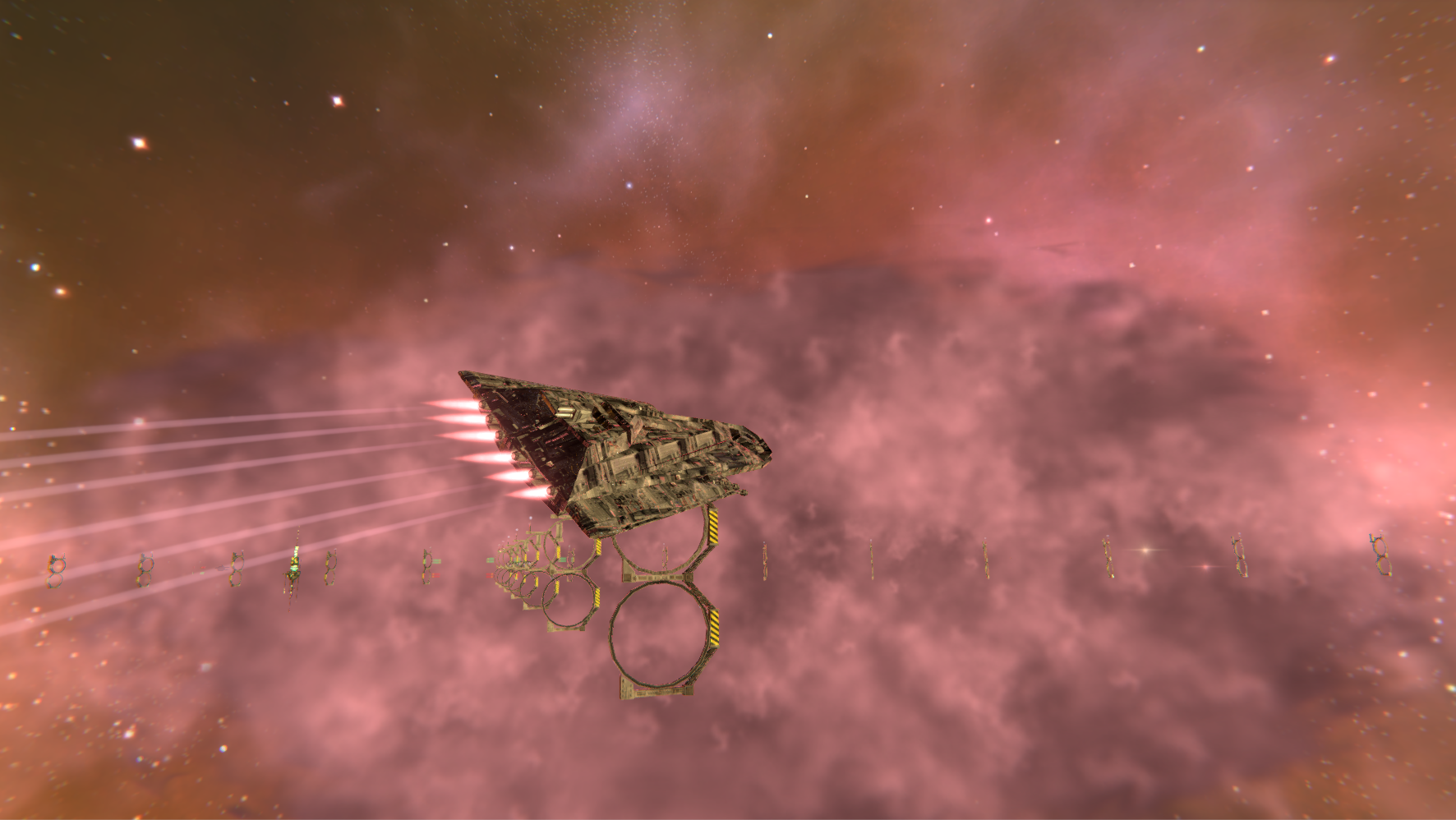 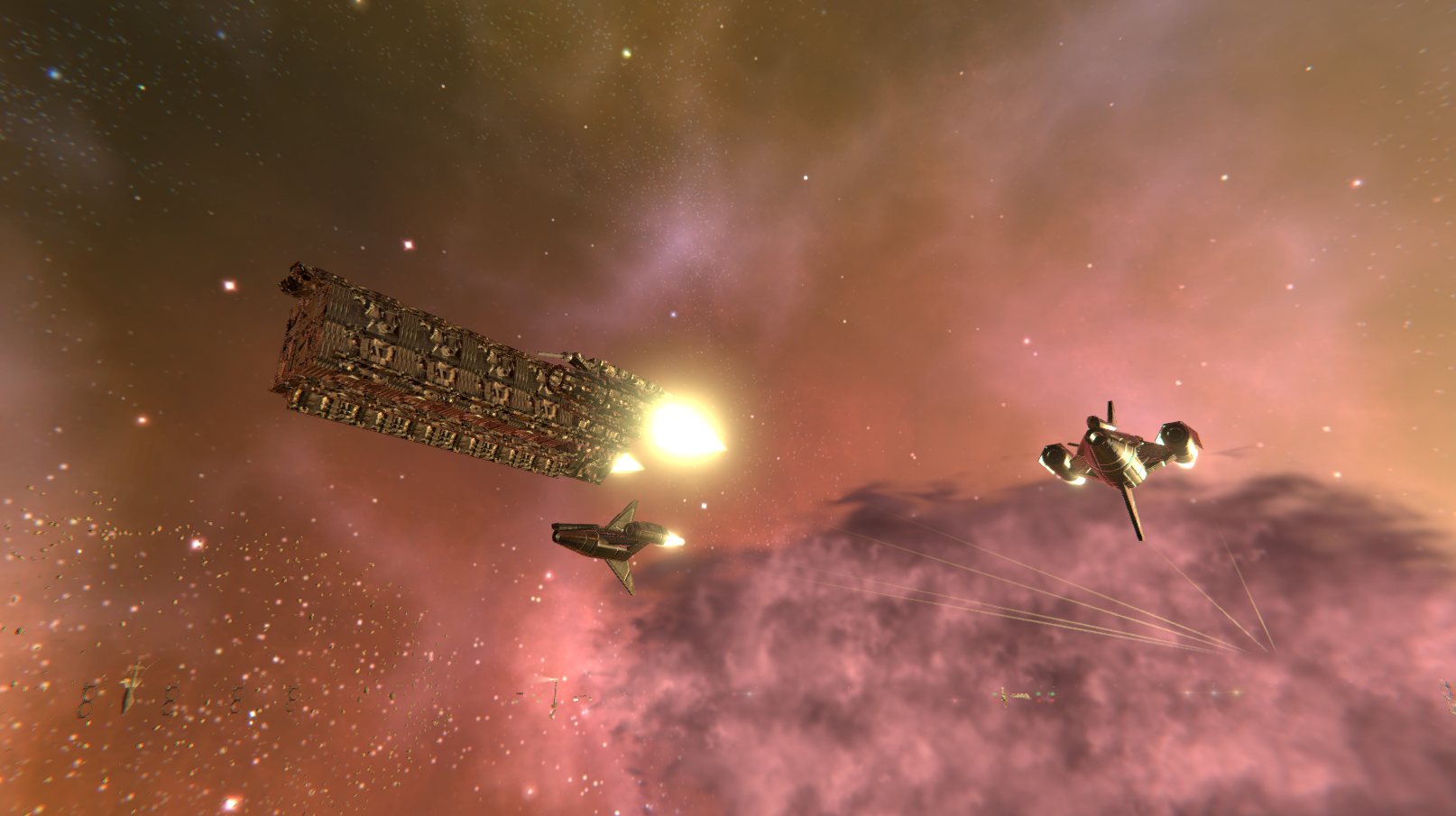 Freighters aren't the only thing you can fly of course. Bombers were also implemented (as well as new UI and mechanics-related stuff to handle the special nature of bombers). See bombers lack traditional firepower, but can mount two heavy equipment slots at once, allowing for some truly devastating, if difficult-to-use, attacks.

And of course, there's always a smattering of bigger, nastier ships for NPCs to fly and take advantage of. From Warfoundries to luxury liners, a variety of ships are under production. 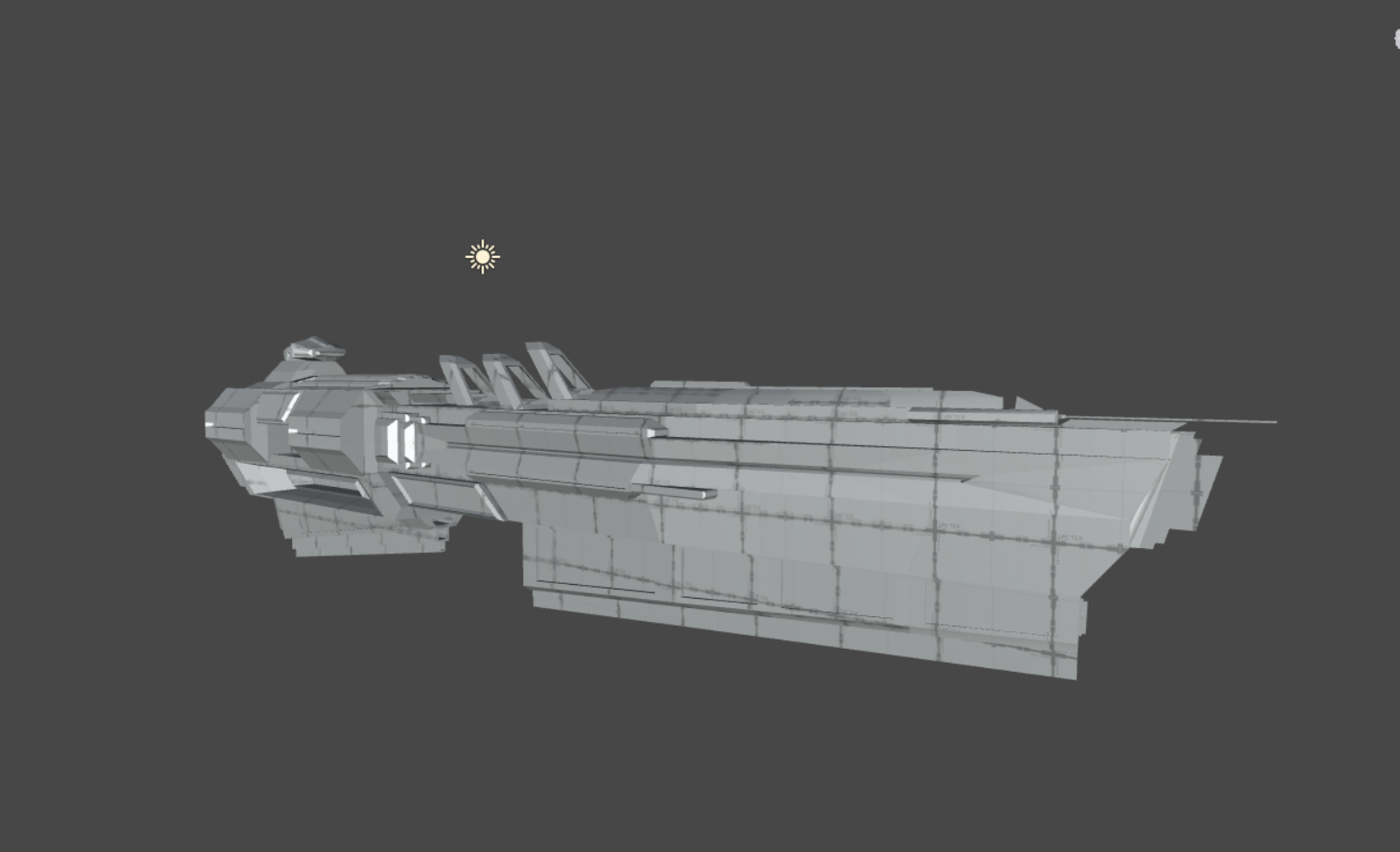 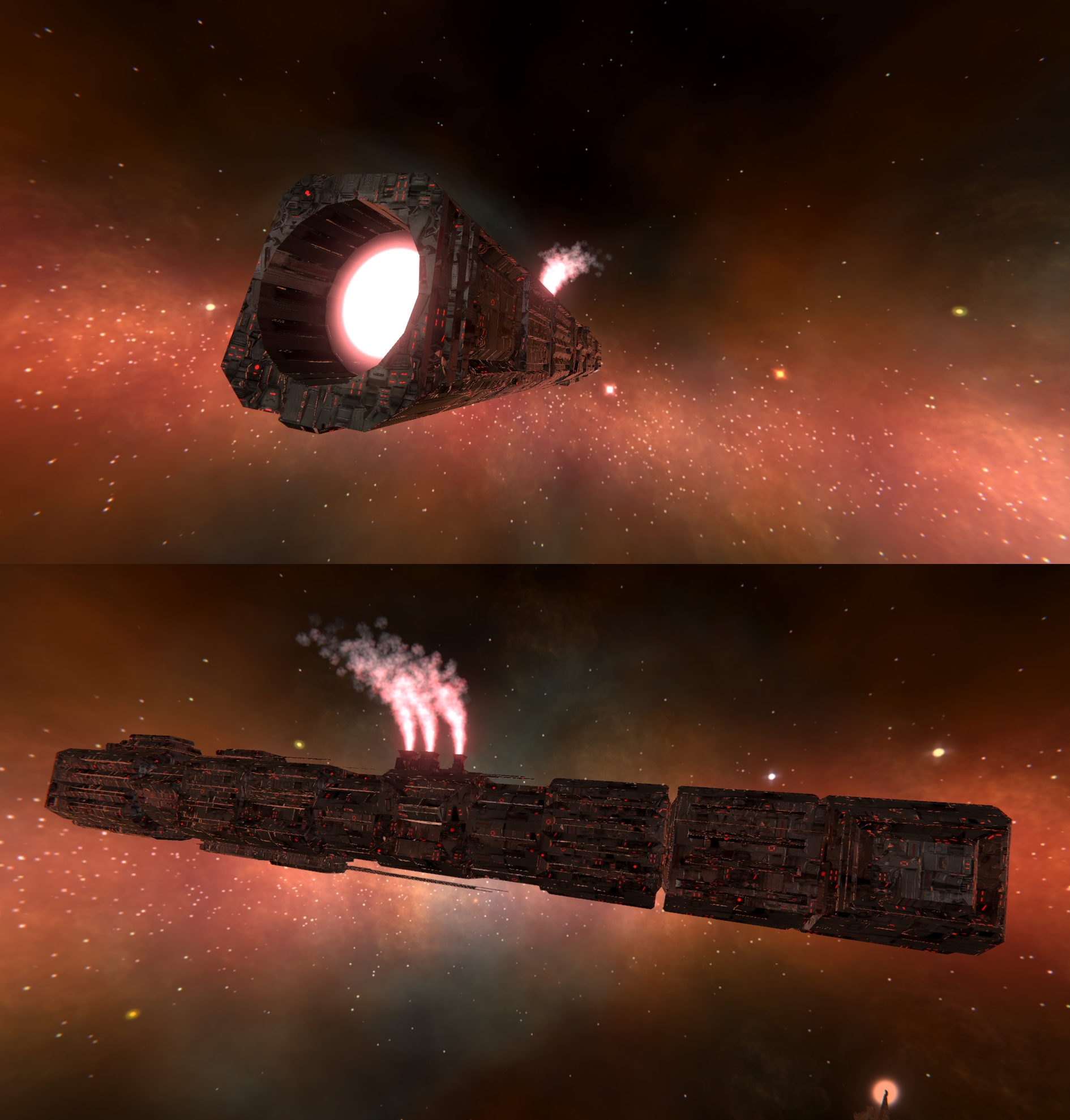 One of the most exciting changes coming with Underspace is a new camera mode I affectionately dubbed "loose camera mode". Those who played our demo know that the current camera mode followed you fairly closely, while this new mode operates more like those classic space games we all love so much. Take a look.

There's quite a lot of camera changes that are hard to demonstrate in screenshots alone, so as always be sure to take a look at the Kickstarter link!

Of the 150-odd stations and landable planets in game, about 65% of those were little more than giant white cubes (for placement reasons). You can't have a game with not but giant white cubes, so a big endeavor was changing all those cubes into detailed station exteriors. That was where the bulk of the work in September went towards, and I'm happy to report that all stations in game now have handmade exteriors for each. I also fixed a variety of bugs related to stations and NPC pathfinding, adjusted station bounds, gave all planets docking rings (and gave docking rings descriptions) and much much more. Take a look at some of the new stations. 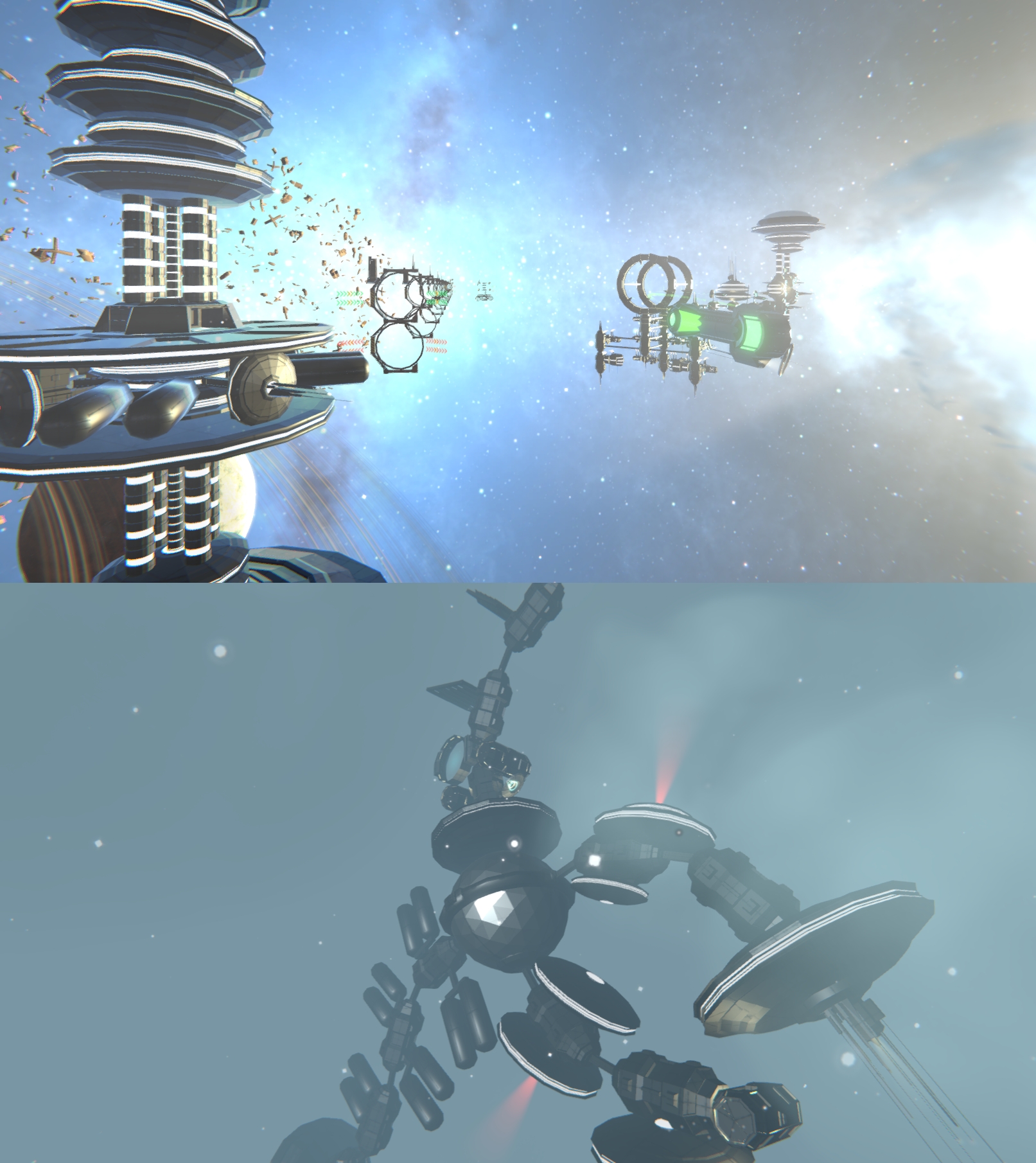 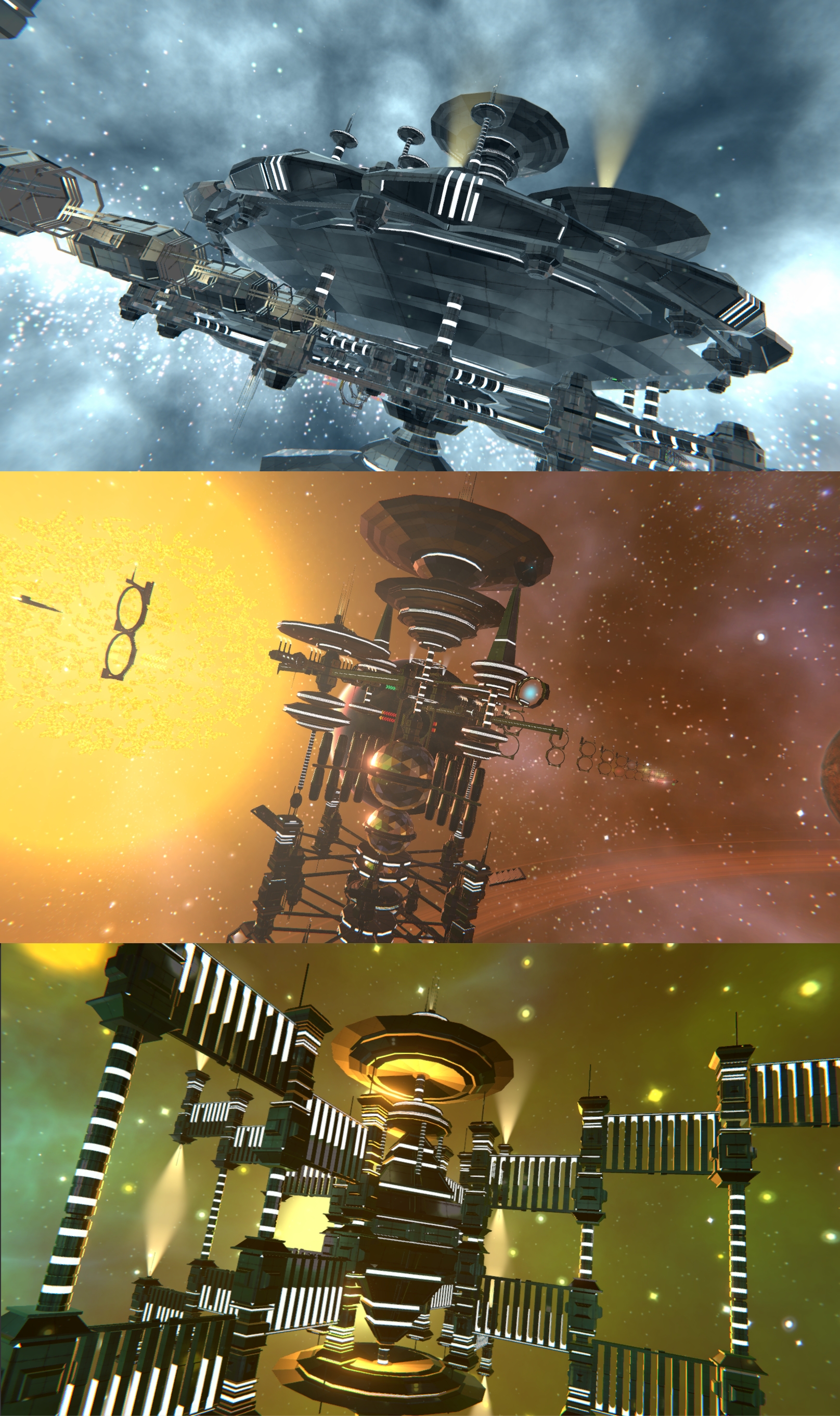 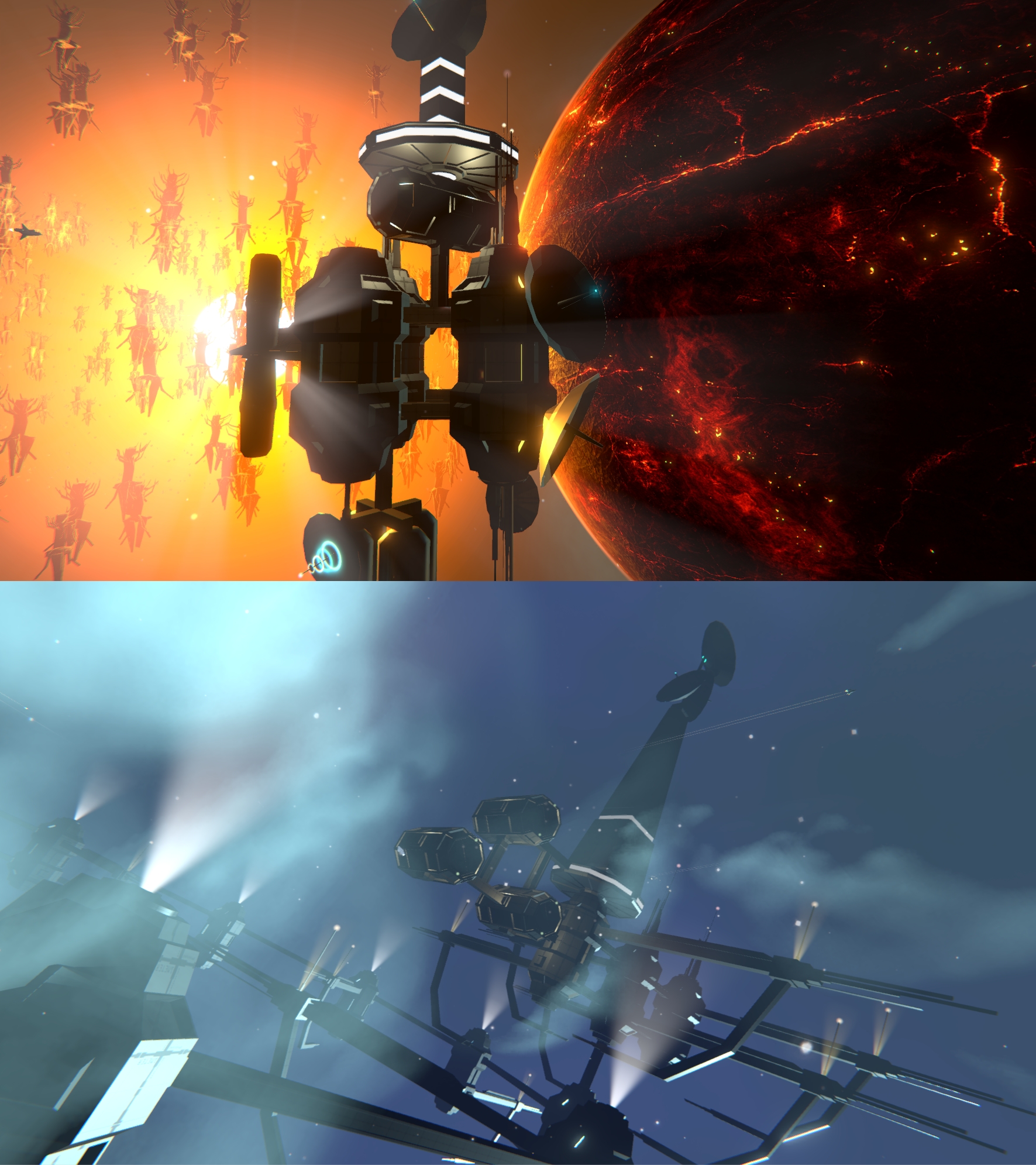 Of course, most of the stations you're seeing only have basic, greyboxed models. With the money from the Kickstarter, we've been able to create better models for stations. And not just stations, fixtures, lightposts, windmills, lighthouses and much more all have new, prettier models made and implemented in game. 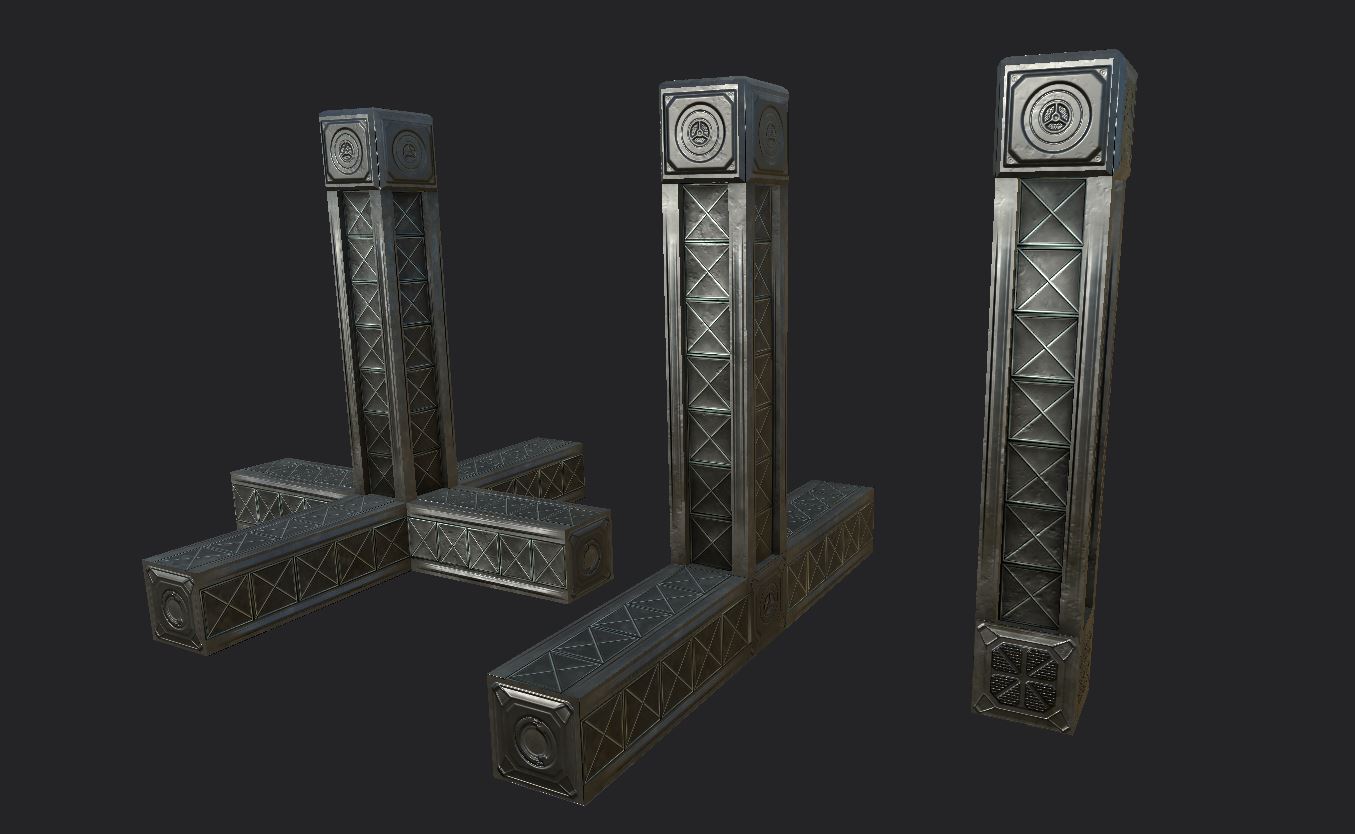 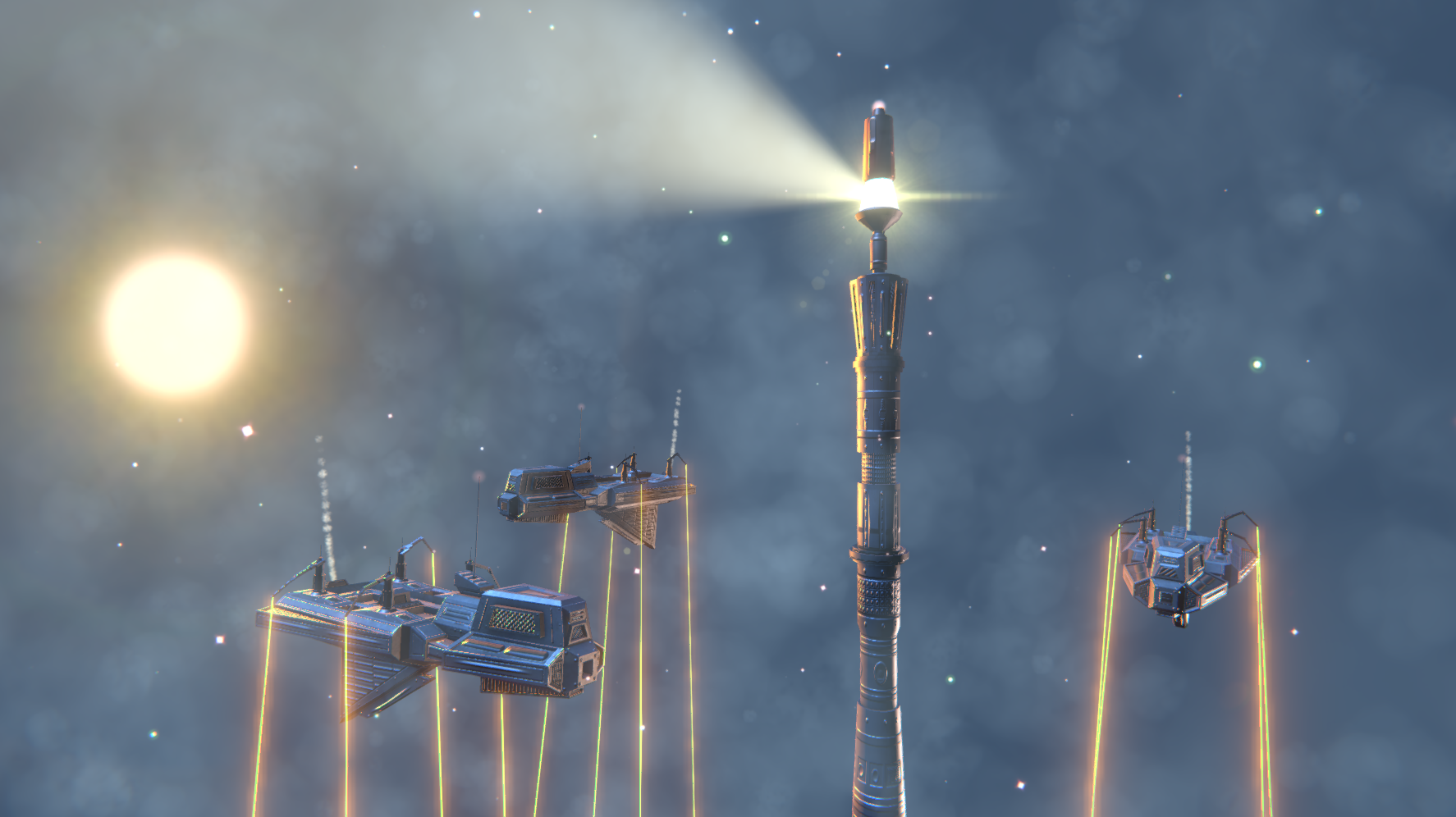 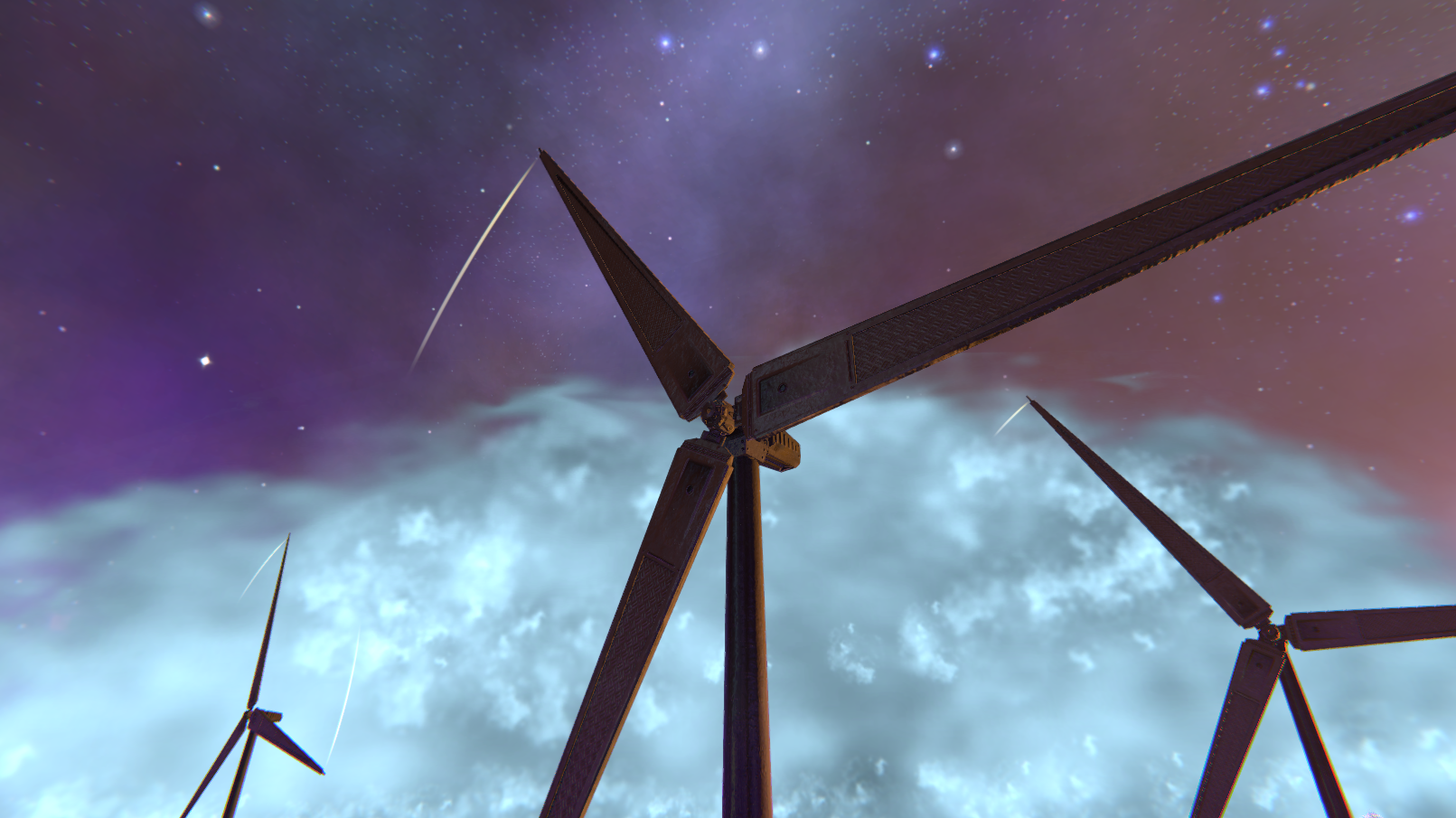 Suns and nebulas, stars and gasclouds. These two things feature overwhelmingly in a majority of most of the star systems in game, so it's important to get them right. Suns in the demo you might notice have a tendency to be blindingly huge balls of gas. Admittedly this is what a sun is but we wanted there to be more visual variety and control. Suns now have over 50 new variants, spines, glows, and effects to be applied, and can be occluded by objects, grow in size in nebulas (because of light refraction or something I don't know), and much more. And they look good. 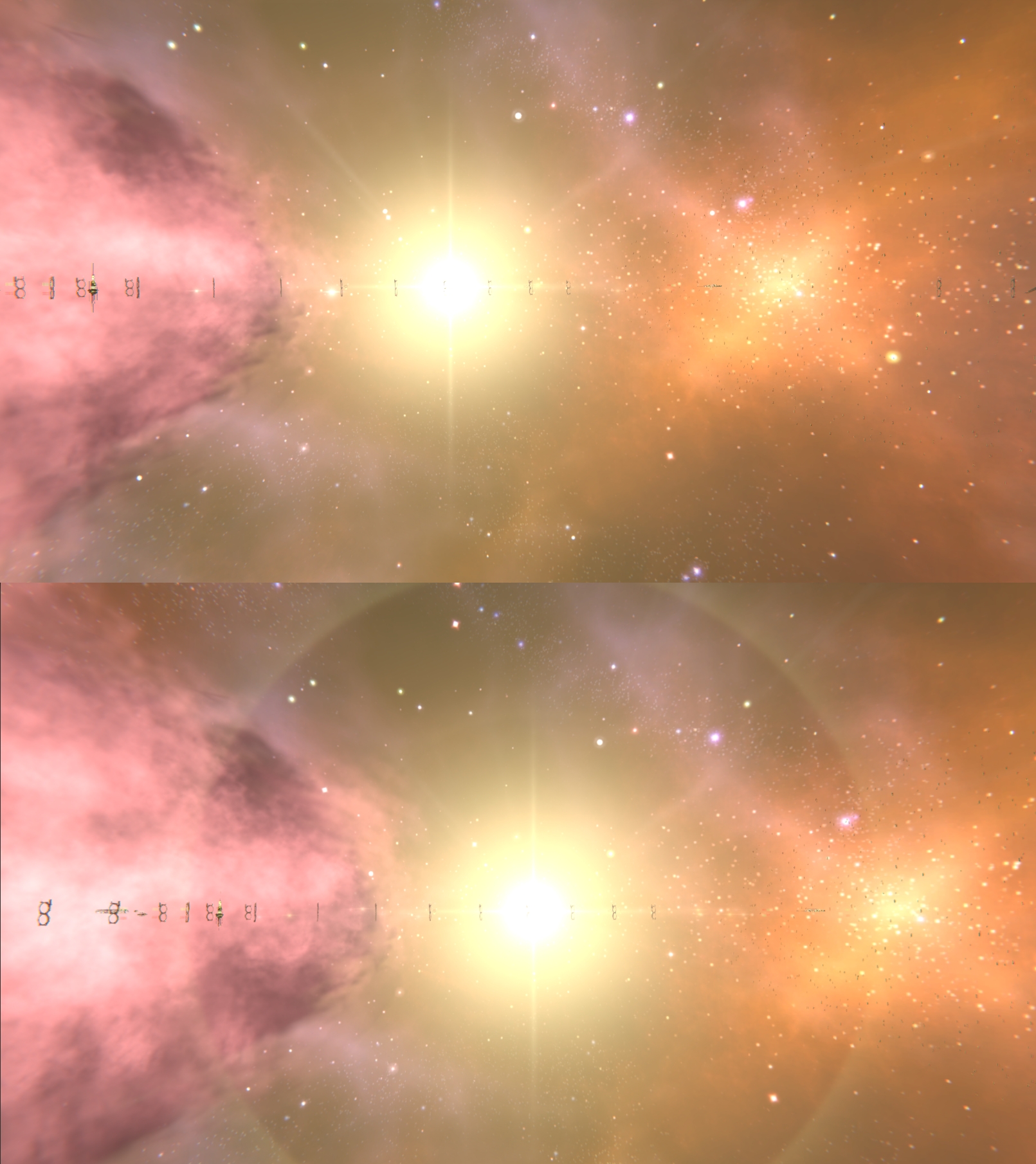 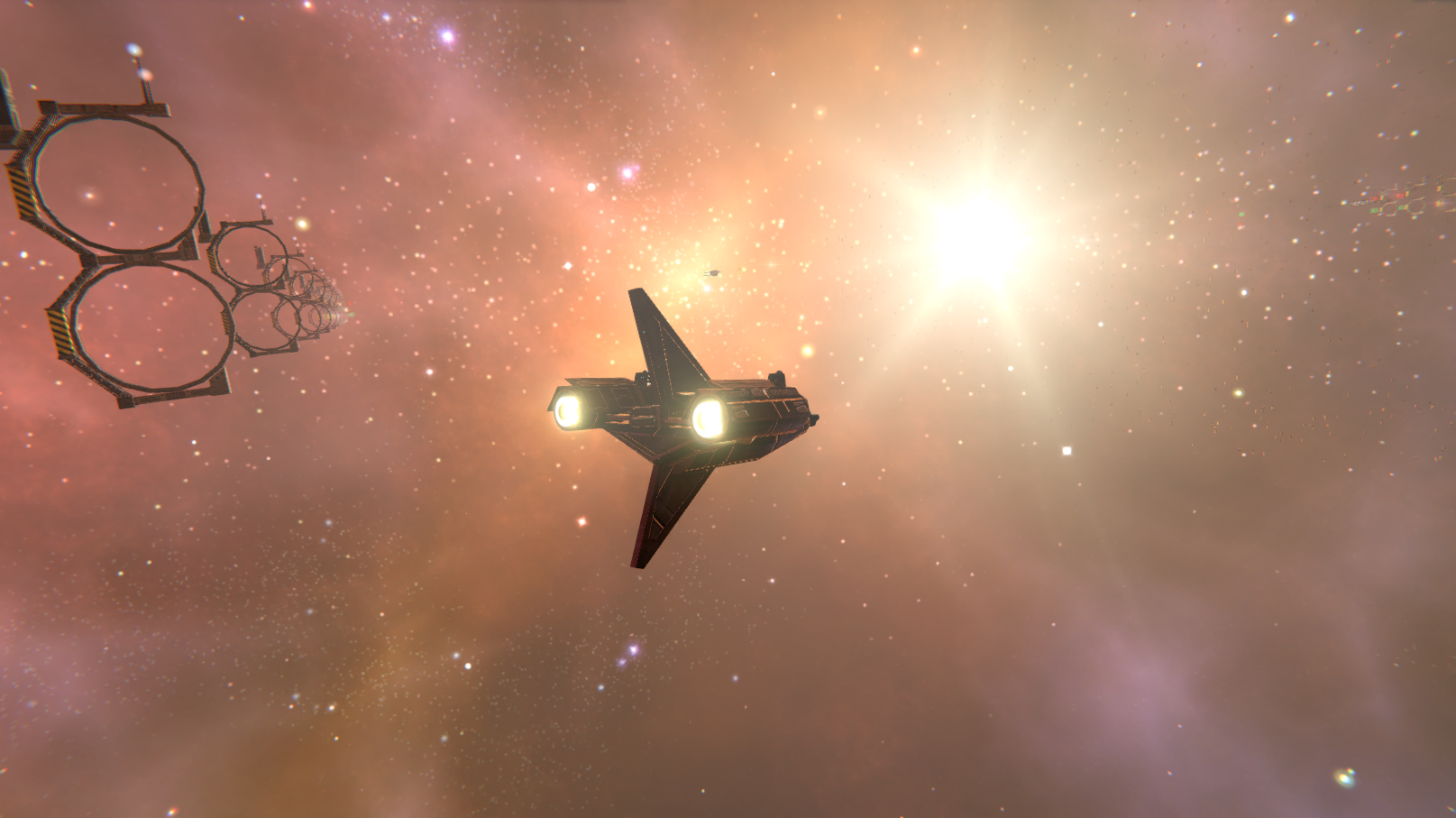 Sun tech is still being worked on of course, both in tracking down and making new variants, and replacing and tweaking existing suns.

Meanwhile, nebulas needed a similar overhaul for visual clarity and variety. For starters, we've created an additional ten nebula types, gave them volumetric lightning and volumetric lightning, sunshafts, easier transitions, and did a whole pass on every nebula to make sure they weren't blindingly bright. Brightness being a quality of ambient and directional lighting, star systems were also looked over and given a pass here, as well as more control over how these star systems can apply their lighting. Overall, it's pretty. 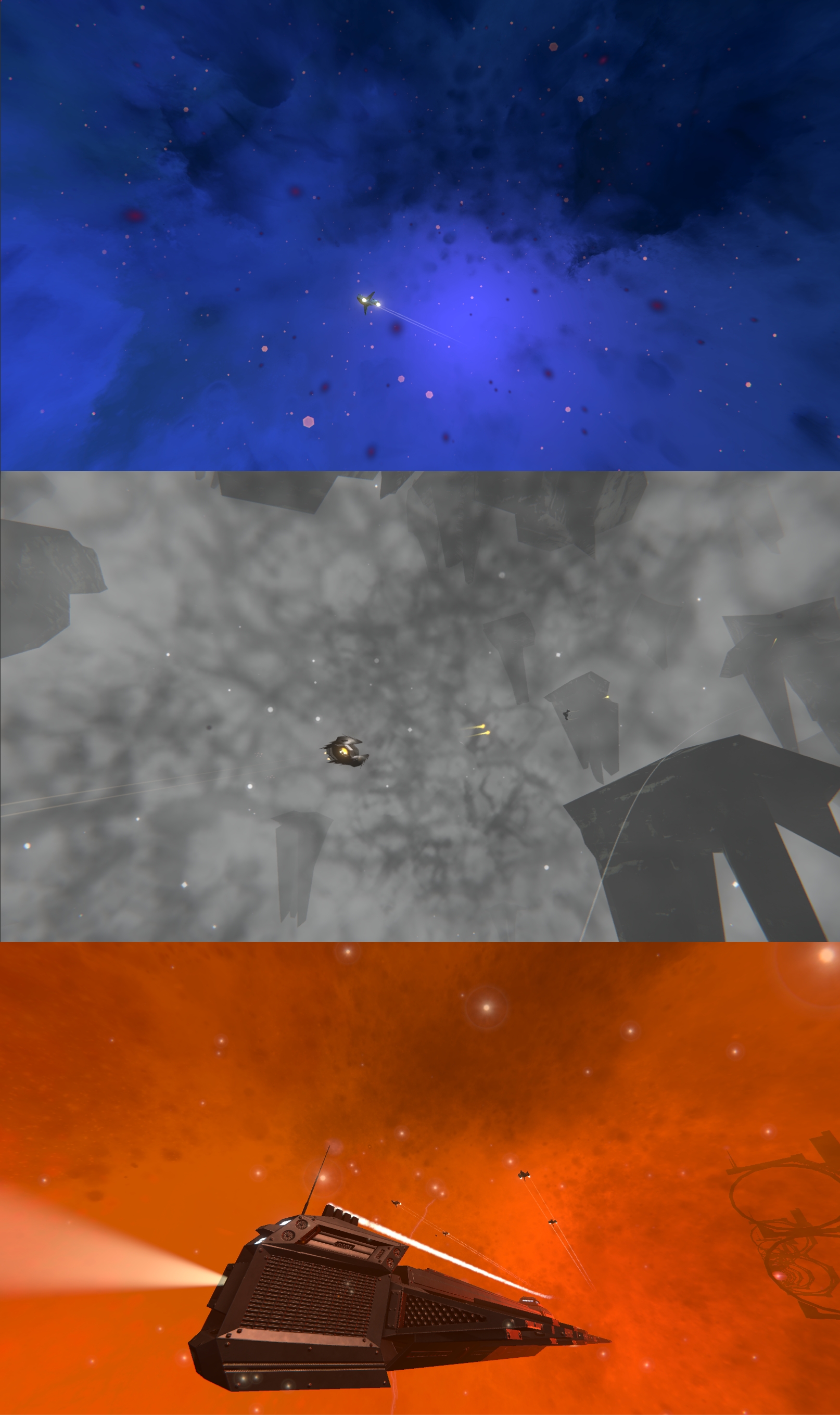 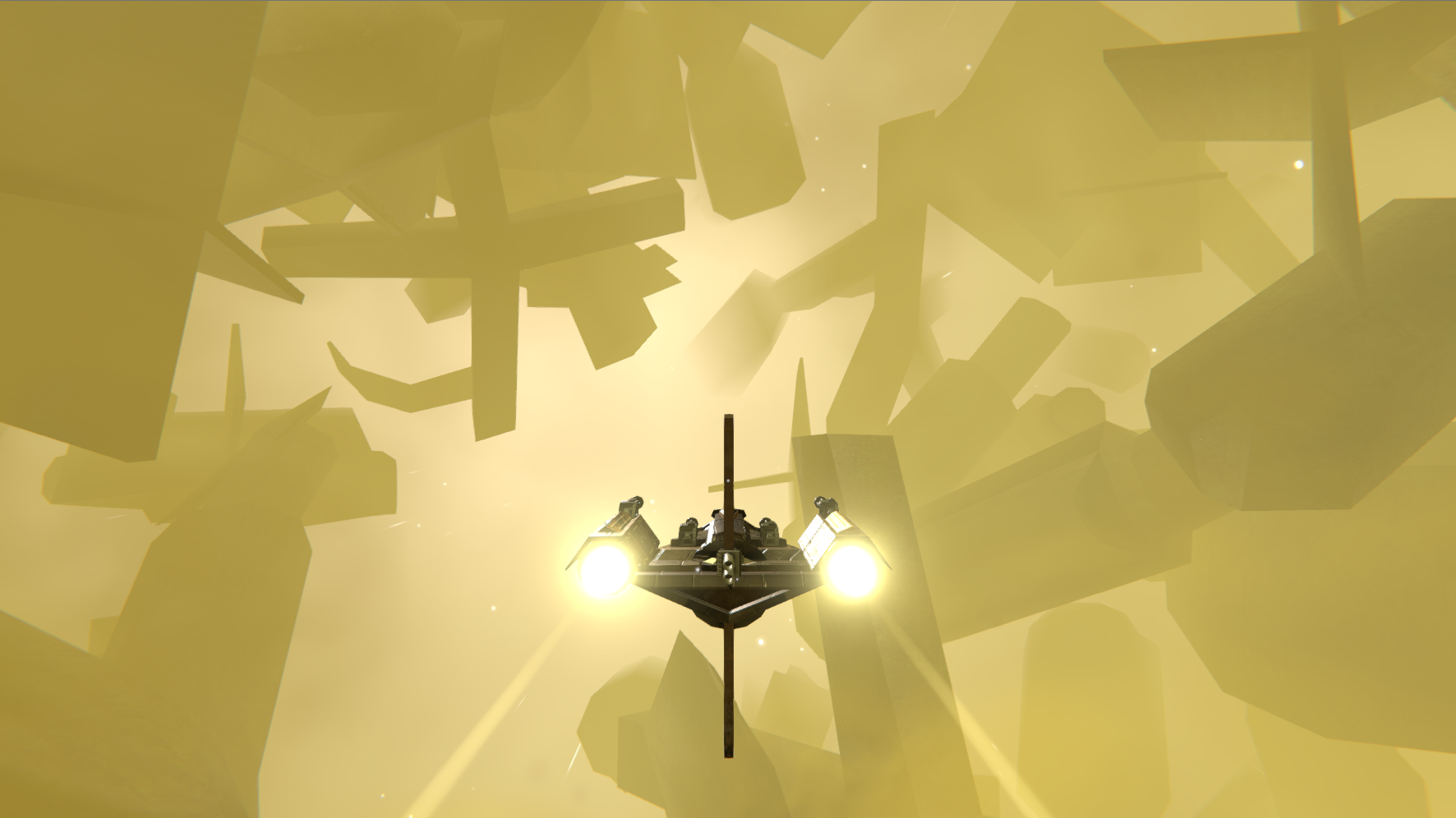 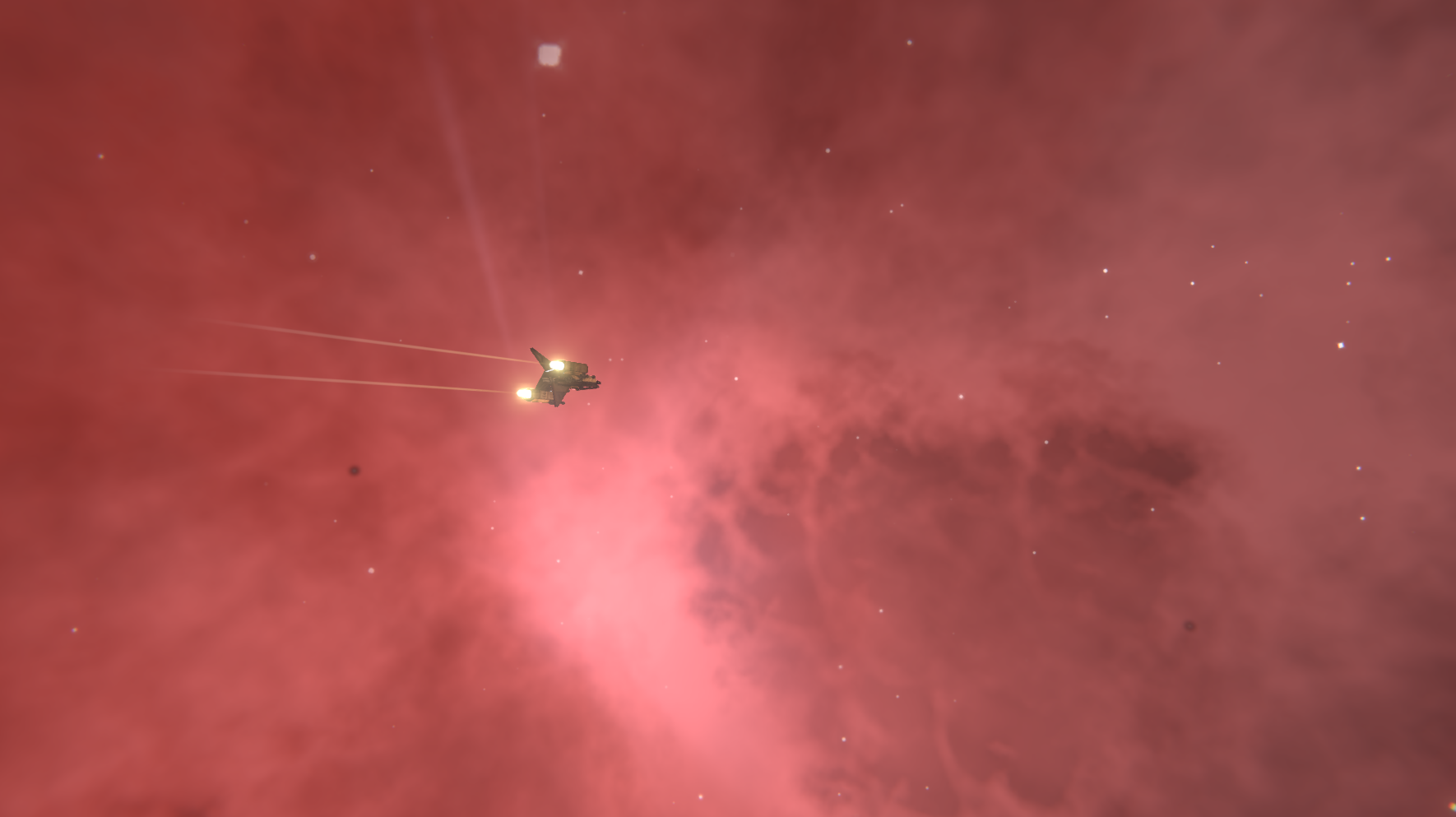 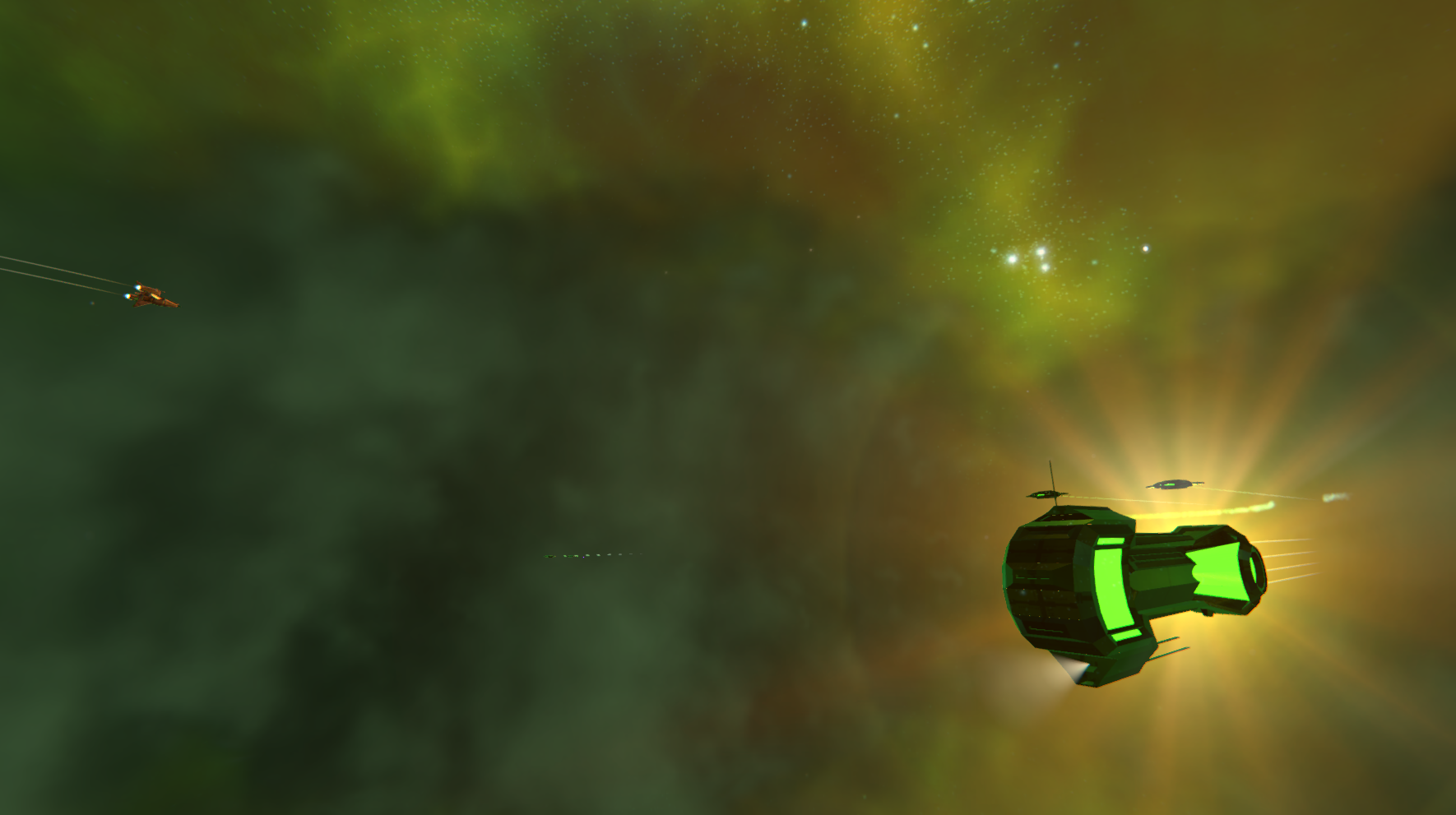 In addition to tons of bugfixes, audio tweaks, changes to waypoints, etc, etc, we're also hard at work on a new tutorial system. While the old one will remain in place as a quick reference guide, the new tutorial is a full level unto itself, which can be accessed from the main menu. 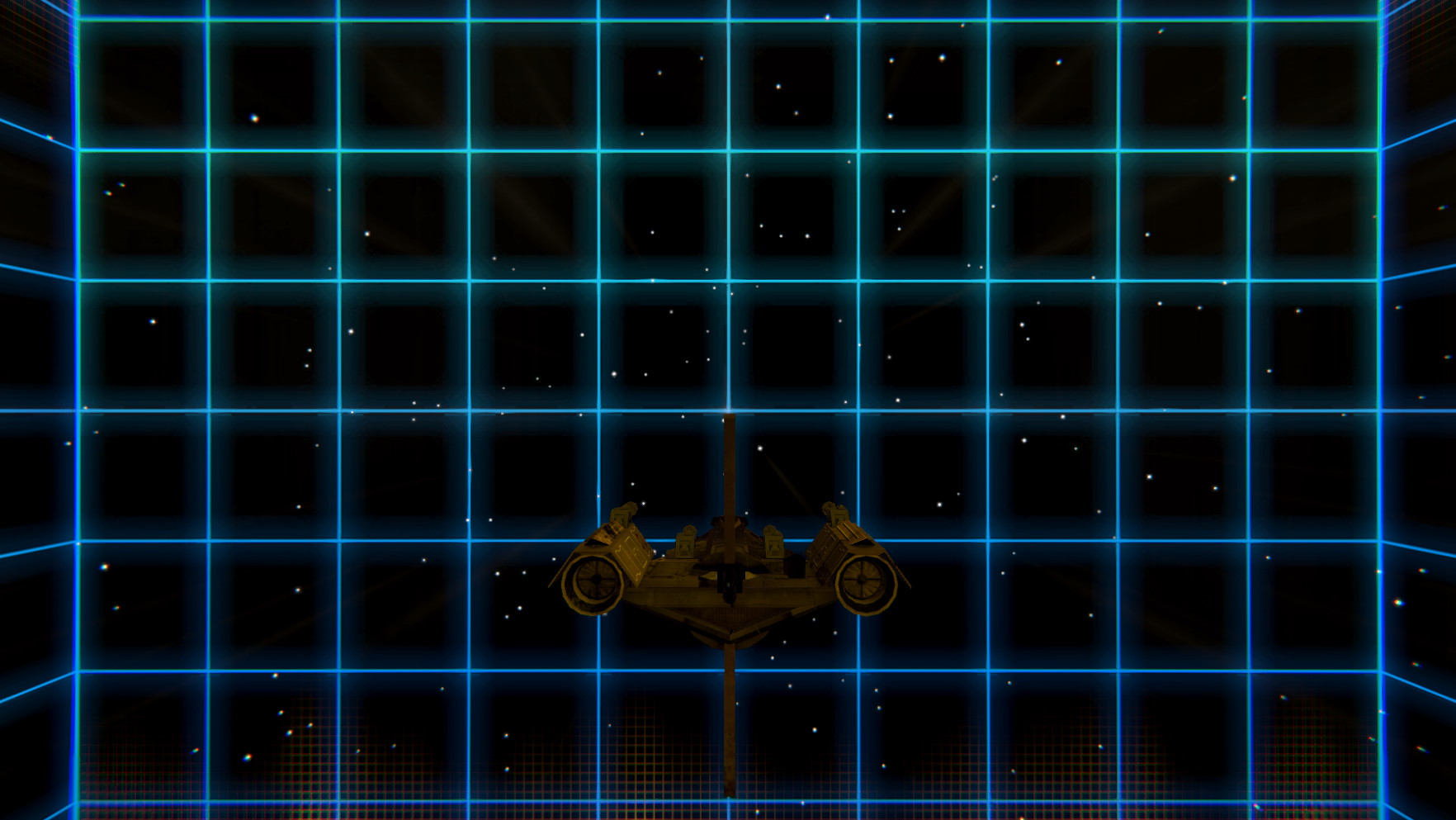 And that about covers the big points. As always, check it out on Steam and Kickstarter to get full monthly doses of all the delicious progress being made.