Dwelvers 0.5 will bring forth our first enemies. known in the deeper parts of the dungeon as the impanzees, a formidable bunch when grouped up, a cowardly beings when faced alone.

I have been working non stop those last few weeks further developing the art style, bridging the gap between the cell shaded look and the dark atmosphere feel, implemented the very first enemies of the game as well as a combat, a flight or fight system and the flags systems.

So, let me introduce you to the our newest foe: 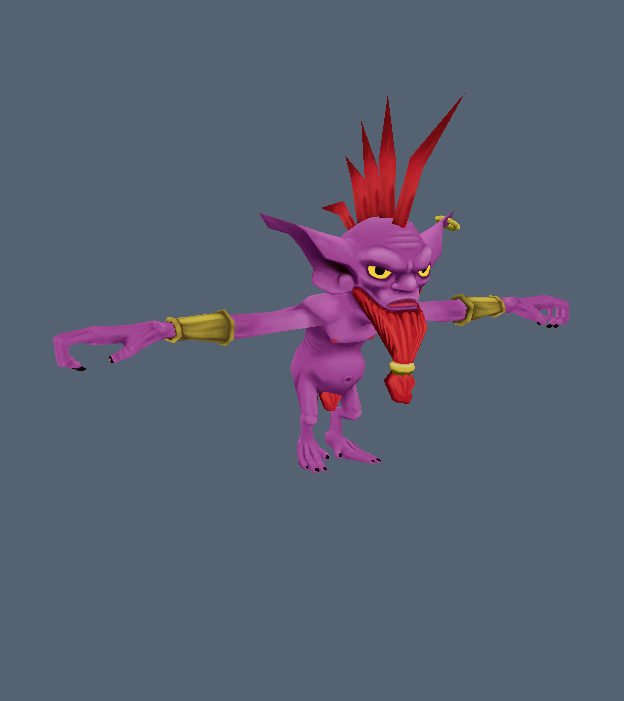 These horrible abominations are said to be the product of an exiled evil dark lord that was in need of a semi intelligent, yet somewhat organized creatures at his command. losing access to the undergrounds, that dark lord has resorted to the beings above the surface. looking and searching for his perfect candidate for years, he has finally found his perfect creature in the deeper forests of a certain land.

Unsatisfied by their lack of evilness, the dark lord had cast horrible rituals and spells that had merged those newly found creatures known as monkeys with the servant imps that had served him from before. through torture, deprive of food and sunlight, he had made them tough and evil.

The dark lord, pleased with his newly created beings, has decided to set them loose to the undergrounds, where they have developed their own society which consists on pillaging, hunting and slaughtering any intruders.

These creatures are known as the Impanzees.

Combat
In order to implement the impanzees, i had to design and code a combat and flight or fight system.
the impanzees travel in large groups and hunt lessers beings, namely imps, using their sight and smell senses. the sight is straight forward. when they see a weaker foe, they will charge him, throw stones at him and do their best to kill it. the smell however, is bit different. the impanzees track the scent of their targets. if a creature has recently walked on a tile, the impanzees will follow his trail and hunt him down.

When they are healthy and in a large group, these impanzees will not be scared of anything. however, alone and hurt, they run away from the face of danger. so are the regular imps, who pretty much are a bunch of cowards that run away from everything too scary for them :)

(click to see the impanzees throwing stones at the poor imps)

Skills
In addition to implementing the impanzees with their throwing stones, i have already enabled the dwarves to attack and engage in combat. currently, their unique skill is that they can block incoming hits and deflect the thrown stones. likewise, almost every creature in the game will have a unique ability.

Flags
Flags will be the player way of influencing what his creatures will do and where they will do it. this is done by placing flags that are representing a reward promised to those who fulfill the order of the flag. different creatures will prefer different materials, so the player could influence which creature will most likely respond, by offering a tribute he will love. for example, the dwarves love beer and will respond to promises of beer given to them. trolls might prefer meat, imps might like gold, etc.

There are going to be different types of flags for different type of tasks. currently, the flags planned are Explore, Rally, Increase production (promised reward for imps working on those areas) and Keep out (a flag that will scare your creatures from proceeding forward past this flag)

If you want to see all this in action, i suggest checking out our latest video:

As always, you are more than welcome to share your thoughts and suggestions!

Thanks for reading this,

This is going to be great :D