A Public Demo and a Kickstarter are in the works! There also many changes not mentioned yet in the game… up until today! A Timeline system update, Sync-Telepathy, blurry backgrounds, and many more updates, will be discussed in this update!

Today, there are a lot of changes that I’m going to talk about. However, before I do, there’s a thing I want to start with.

Sometime in the near future, I want to put online a test demo accessible to everyone. A shorter and easier survey will be available as well. For the sake of clarity, only the easy mission will be accessible for the demo from now on. A huge amount has changed since last time, including the level design of that mission.

And here’s the big news: I’m going to start working on a Kickstarter (hopefully within this month, or next month). Why? The game severely needs work to be done constantly, but if I keep working my current job (which is an unreliable inventory job that makes not much money, but requires huge time commitments to do, mostly due to transport), I won’t be able to finish Hegemone Pass anytime. In addition, I’ll need to get a music composer on board, and have reliable money for them to work properly (and not wait 2 months for the next request).

Due to my lack of capabilities, most backer rewards will have to be in-game recognition/design X or Y style rewards. I honestly don’t think the cost of the Kickstarter will be much (in between 10,000-15,000€ depending on taxes and some last checks). The cost would be for the music and for me to essentially have Hegemone Pass as a full-time job (a low-paying job for what it is, but enough for me to contribute to the rent and basic food).

One thing I want to do with the Kickstarter is release the Debug Builds as is (not demos) every month or so for backers with the gamekey reward. One fun thing you might be able to do is experiment with cutscene, telepathy, level and attack choreography editors with them. You could also playtest and give feedback on all sorts of areas of the game. While I do need to have a set vision of the game, I’ll be trying to follow up on your feedback as much as possible.

Demo will release first, before any Kickstarter goes online.

Anyway, the Kickstarter details are still not set in stone, but if you have any ideas/suggestions, shoot me an email, a private message on IndieDB, or send me a DM on twitter. Let’s not waste too much time and get straight to the point! The more interesting features are first: 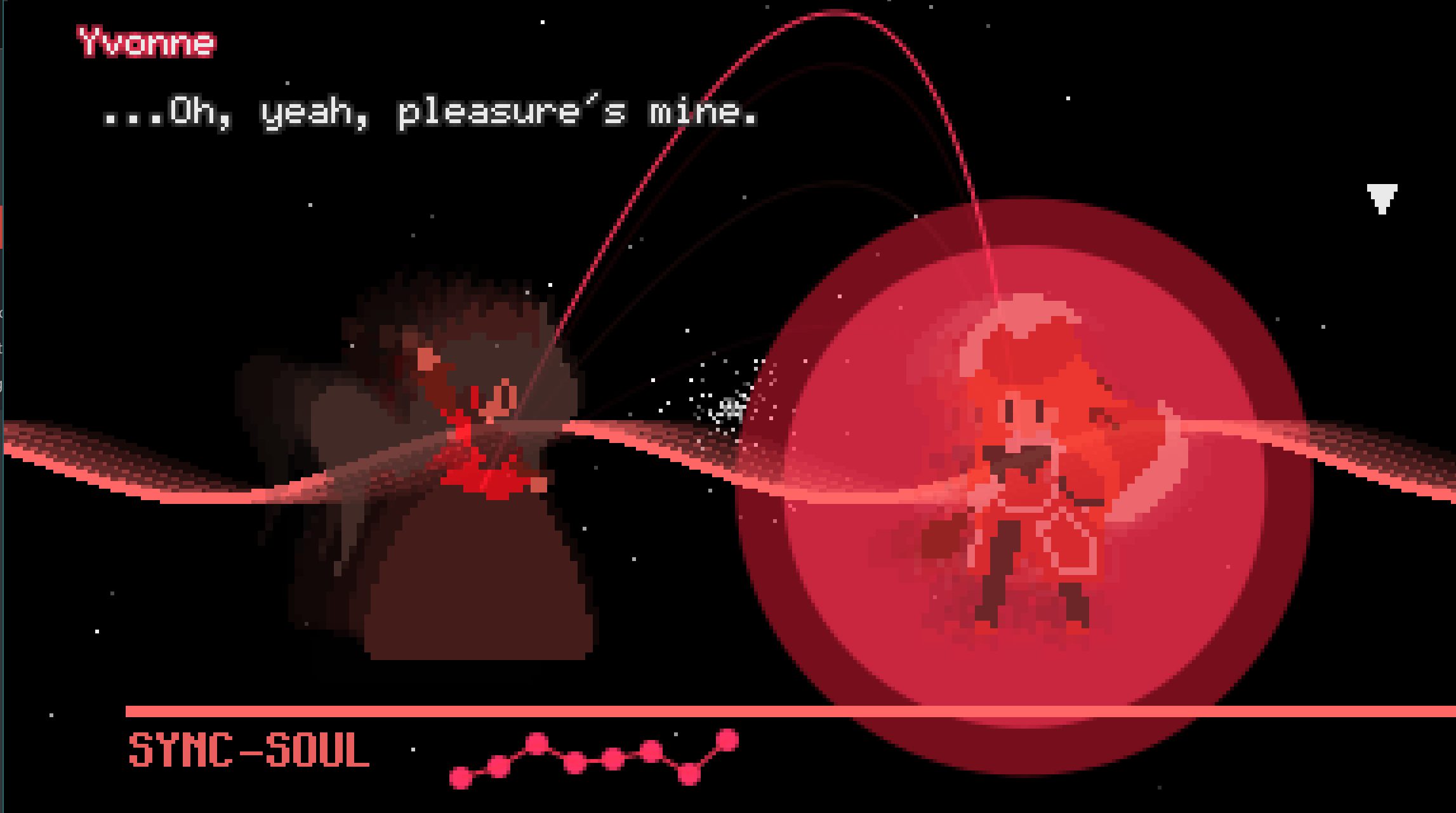 This is a new system in which Persephone can communicate with her allies, such as Yvonne, Ethan and Emilie, as well as non-fighting allies, such as Memo and Persephone’s husband, Hades, via telepathy, a power all gods have.

During the course of the story, you’ll be receiving Syncs coming in from your friends during cutscenes and in levels, where you can also decline calls if you wait it out.

In addition, you can also manually synchronize with your friends at any point in a level or intermission, and you can either get some help or you can chat about the state of affairs, the story… or some quirks of your friends.

Each soul in the universe, gods included, can be talked with telepathically by the stars that soul was created under. 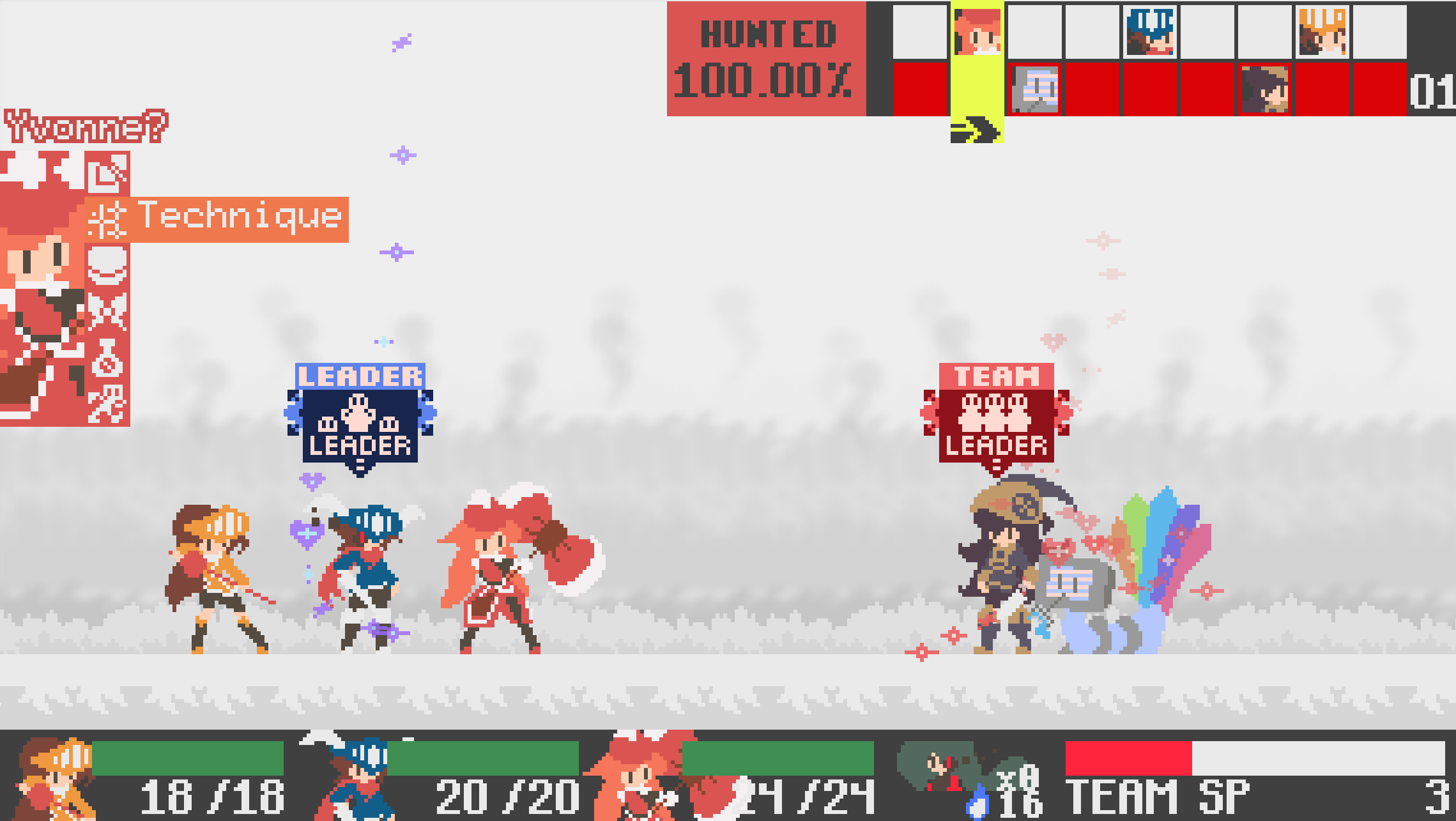 The old system of the timeline got a makeover, now called the Timelag (named after a funny auto-correct bug).

Timelag takes over the old timeline’s imprecise positioning of actors by locking them into only 9 possible spaces.

Biggest change? Actors don’t move on their own… the timelag bar does! When it reaches an actor, they act, then the bar continues to the right. When it reaches the very end, it goes back to the very far left and repeats!

A lot of moves can alter an actor’s position (the user or the target). If an actor moves ahead of the timelag bar when they act, they can act again in the same turn.

But there’s another thing: both allies and foes are on the different lanes. If two act at the same time, the turn is CONTESTED!

When there’s a contest, the two actors will be able to act… one at a time… indefinitely, until either one of them is KO’ed or moved out of the contest zone. The one who goes first is the leader out of the two, and if both/none are leader, their speed determines the first (and if they are the same speed, luck it is).

When an encounter ends (KO or moved out), both are greyed out, meaning they cannot act at all during the remainder of the turn. The greyed out status is taken off when a new turn occurs.

Some techniques also move the timelag bar itself to a different position, allowing you to either skip some enemies’ actions (and allies) in that turn, or giving your allies (and foes) extra actions within a turn.

However, because of these changes, SP regeneration happens at the start of a new turn, and not when your party member acts. While you do get your entire party’s SP Refresh back in a new turn, multiple actions will NOT regenerate SP, so if you somehow try to stall too long a turn with your actions, you’ll be resorting to basic attacks without SP, greatly limiting your abilities.

Rule of thumb is that Physical attacks and techniques often move the target around, while magic generally does not. 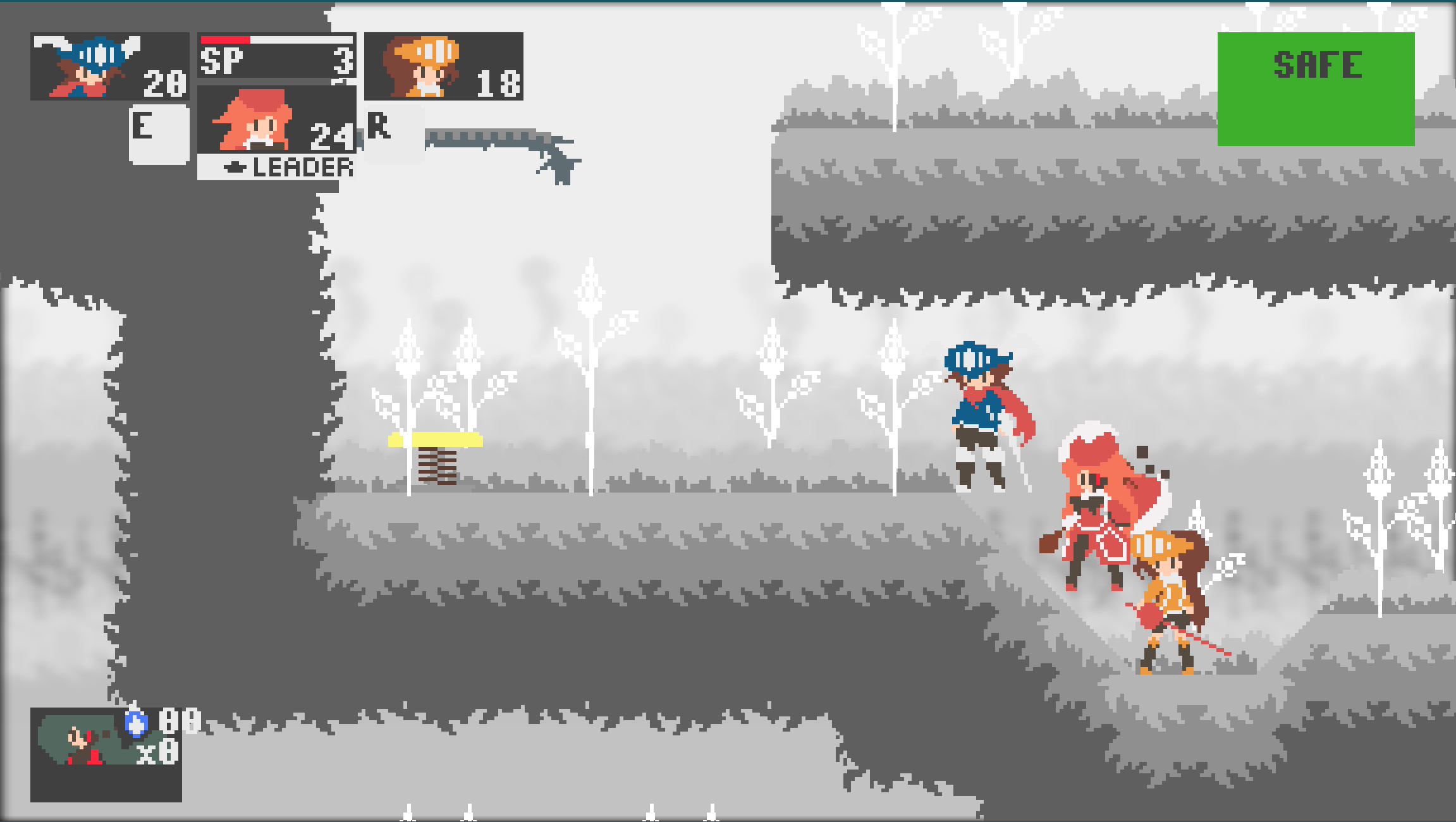 Let’s get this out of the way first… This is a recent addition! You can now enable/disable a background blur effect that shows up in the levels, battles, intermissions, and cutscenes.

The blur intensity is also adjustable. The framerate seems to be “mostly unaffected” when it’s on, though there is a flicker that occurs at the start of certain cutscenes. (And oddly, there seems to be some stuttering on the title screen…) 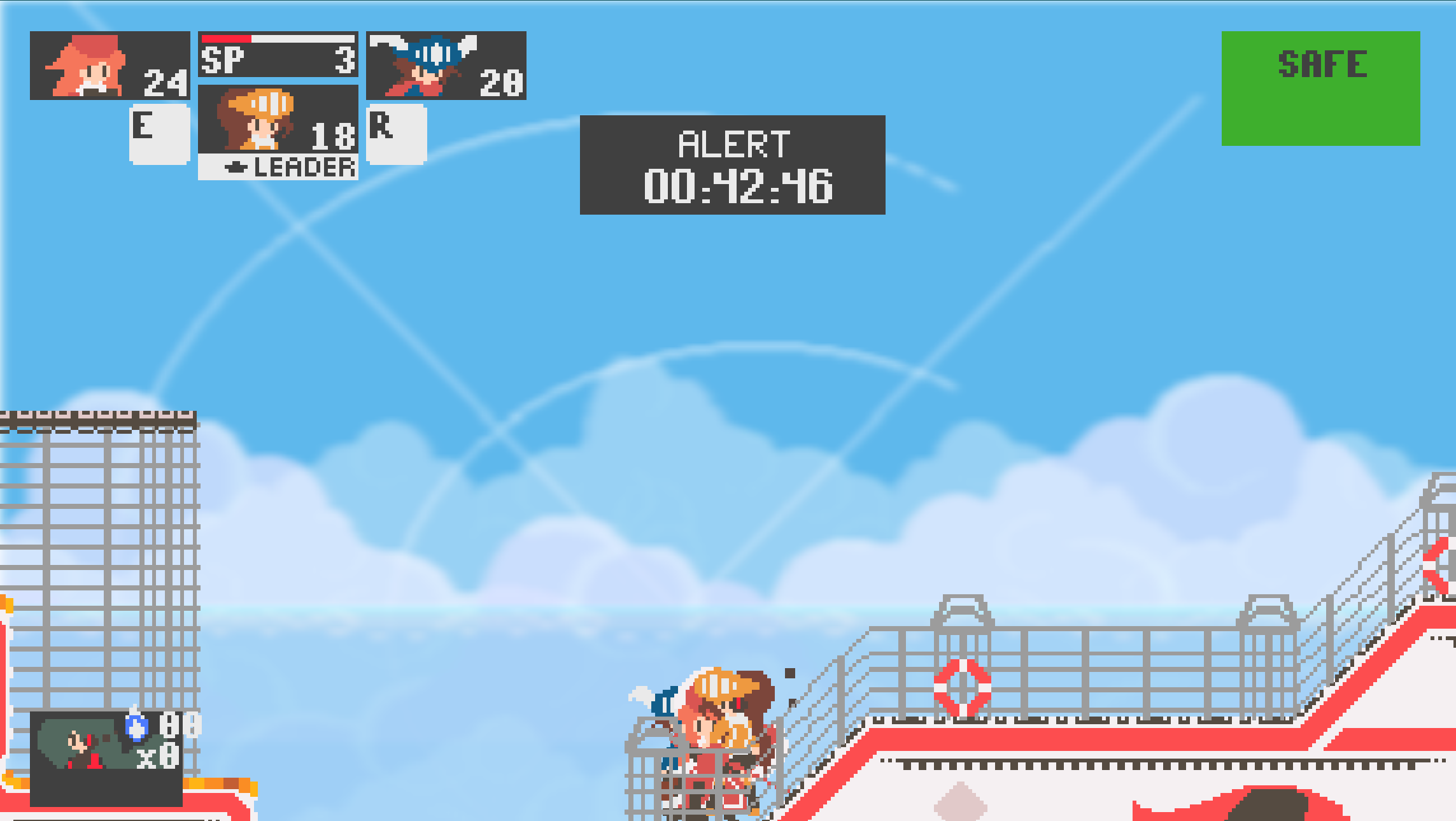 I particularly like this background, which with the transparency, it really sells the water effect better than without the transparency (and it hides a visual artefact due to transparency). Oh, this showcases the camera pan, by the way. It’s explained later down. 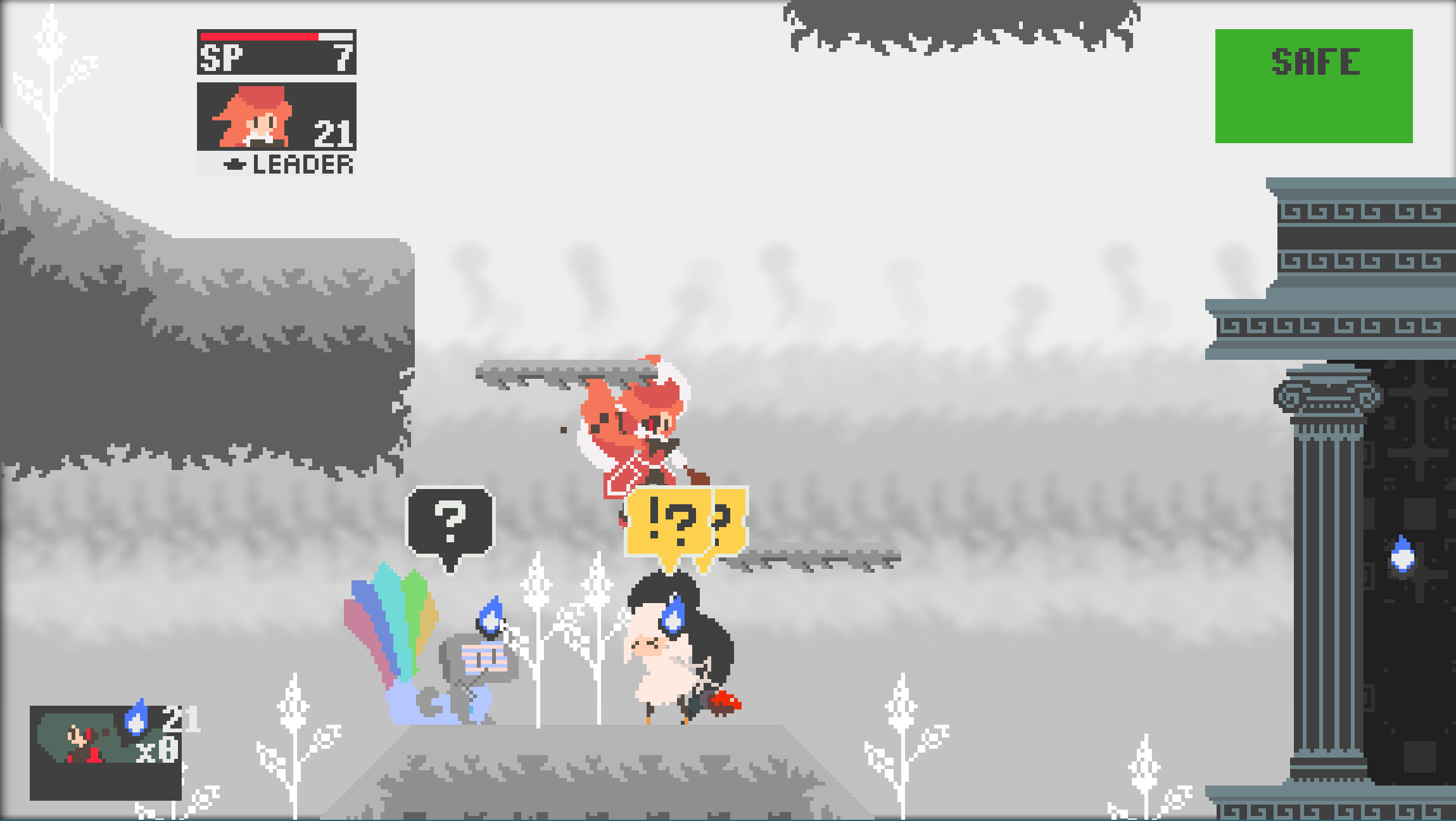 A new technique for your party is to bounce on enemy heads when platforming. This doesn’t start a battle, and stuns the enemy for a brief moment. Holding the jump button lets you get a higher bounce.

Beware, they’ll be spooked and immediately look in the direction you’ve fled to, trying to check just what on earth happened to their precious little head. 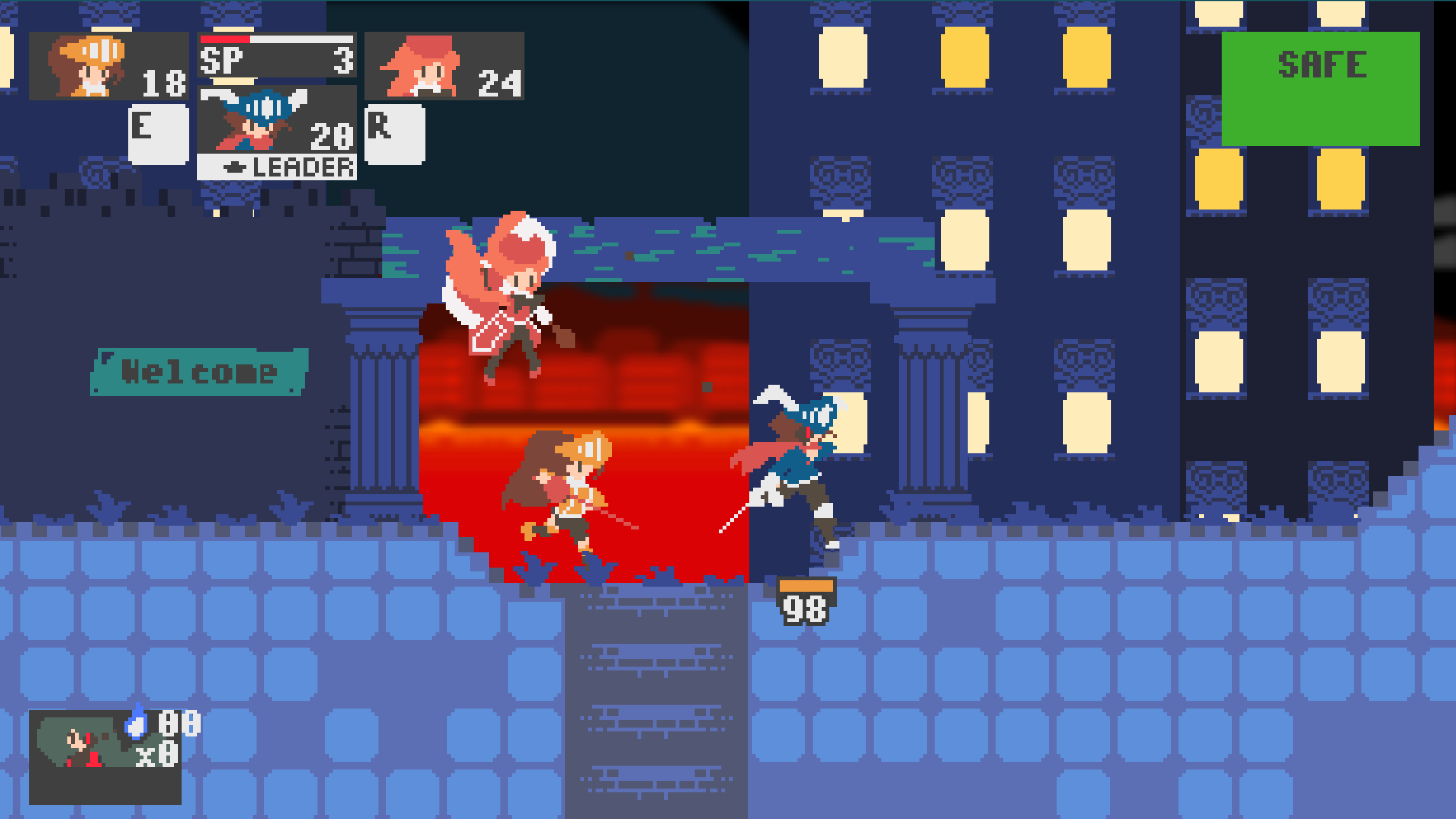 On the field, your allies will now be following you around… hang on, wouldn’t they be caught by the enemy sight?

Luckily, the souls here only care about hunting one person down: you, Persephone. Only the leader, with the miasma eye, can be spotted, because that’s what the average soul in town is looking for. The other allies, when they are not leader, don’t see this miasma eye, and think they are a citizen like the rest of them. So no, they aren’t going to be a nuisance… mostly. 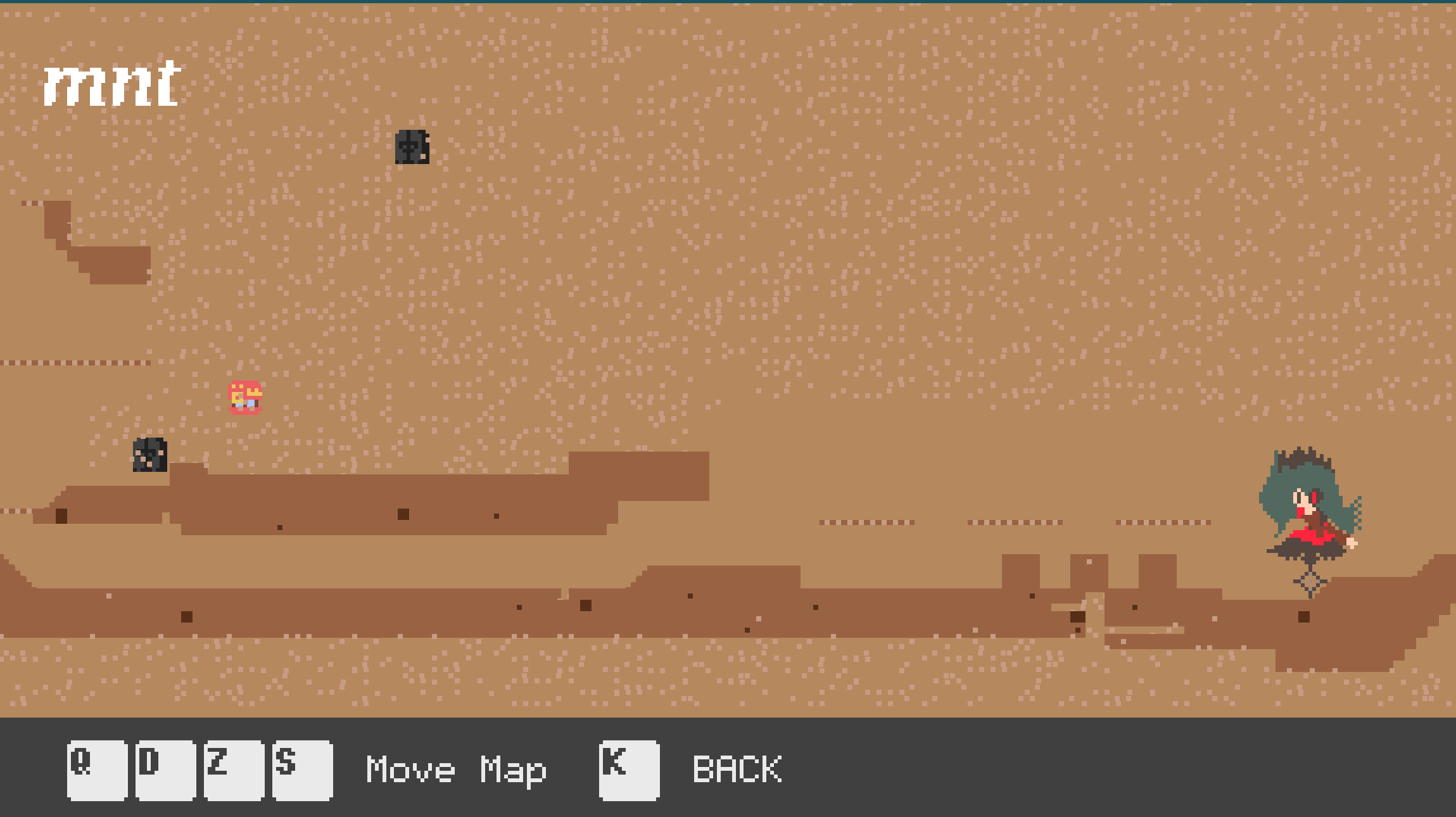 Press the MAP button during platforming will open the map of the current room you’re in. In the screenshot, you can tell by the clean open areas where the player has gone through.

You need to explore the room to uncover more of the map. You’ll also reveal the location of doors and treasure chests. There are other things I’d like to indicate such as Challenge Gates, but I urgently need to focus on the game’s content now. Later on: it’s not much to add, but… you know, developer laziness is a hard habit.

The name of the location you’re in is shown… but this map has only the word “mnt” as it’s location.

With the stealth additions to the game, the camera needed an extra tool up it’s sleeve: camera panning. Four new functions for the buttons have been added to the game, allowing you to move the camera by holding the direction you want to check. Do note you need to be holding it, it will revert to the current position if you let go.

More of a technical feature, but has some user related benefits. For one, enemies now are equipped with a list of actions they can perform. This makes it simpler to quickly assemble the entire enemy AI for a majority of the common enemies, while still allowing specific enemy AI for certain enemies, such as unique foes or bosses.

What’s in for you? You now can check all the enemy moves an enemy has in battle with the Memopedia Scan. All the details of their moves are there, such as base power and movement, are there, as well as the description. You’ll notice enemy exclusive moves don’t have an SP amount. That’s because the AI doesn’t need SP, it’s a silly restriction for Human players. 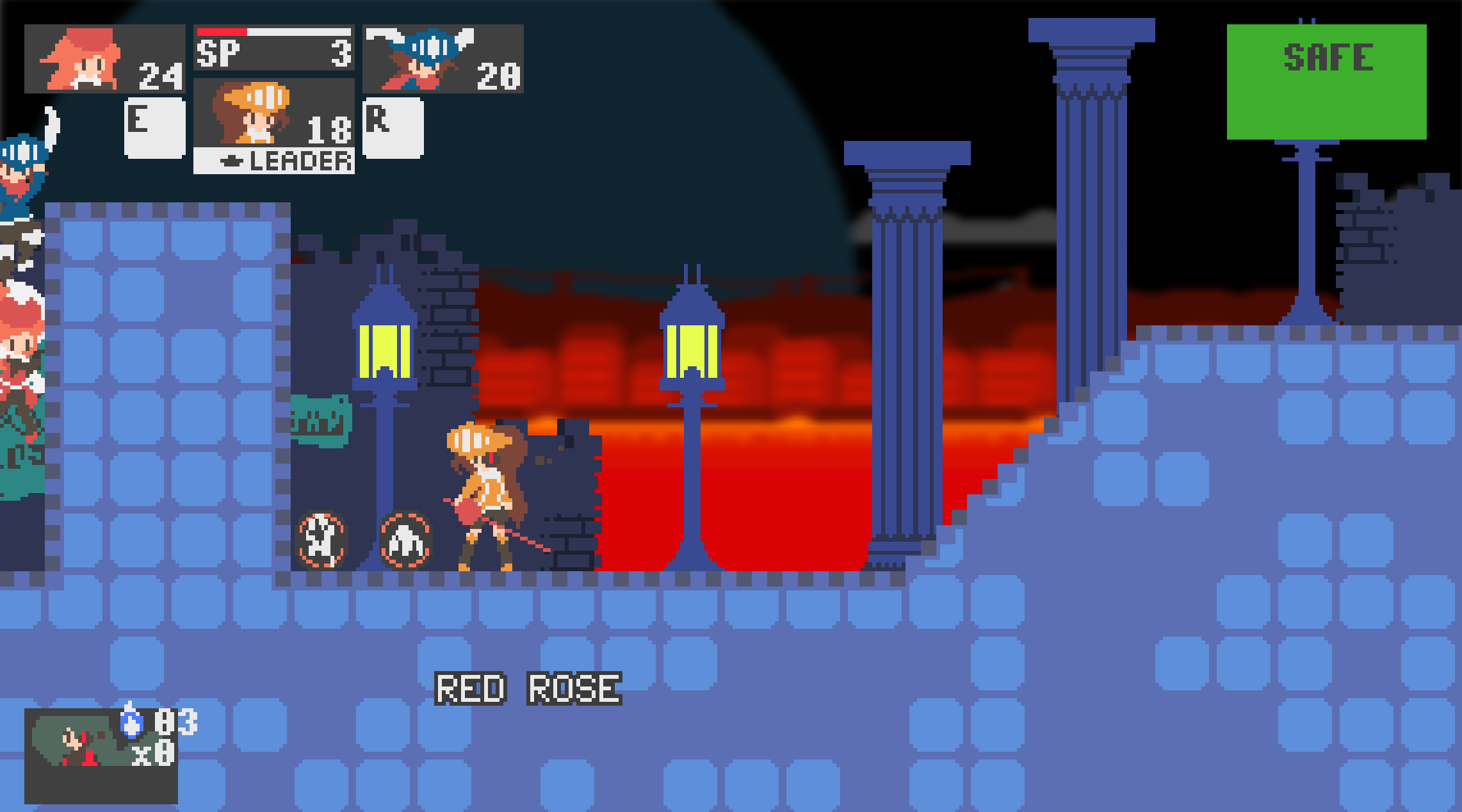 Treasures chest now drop their items on the ground. You pick them up by walking on them. This is more of update to how items exist in the levels, since now things other than treasure chests can give them out. 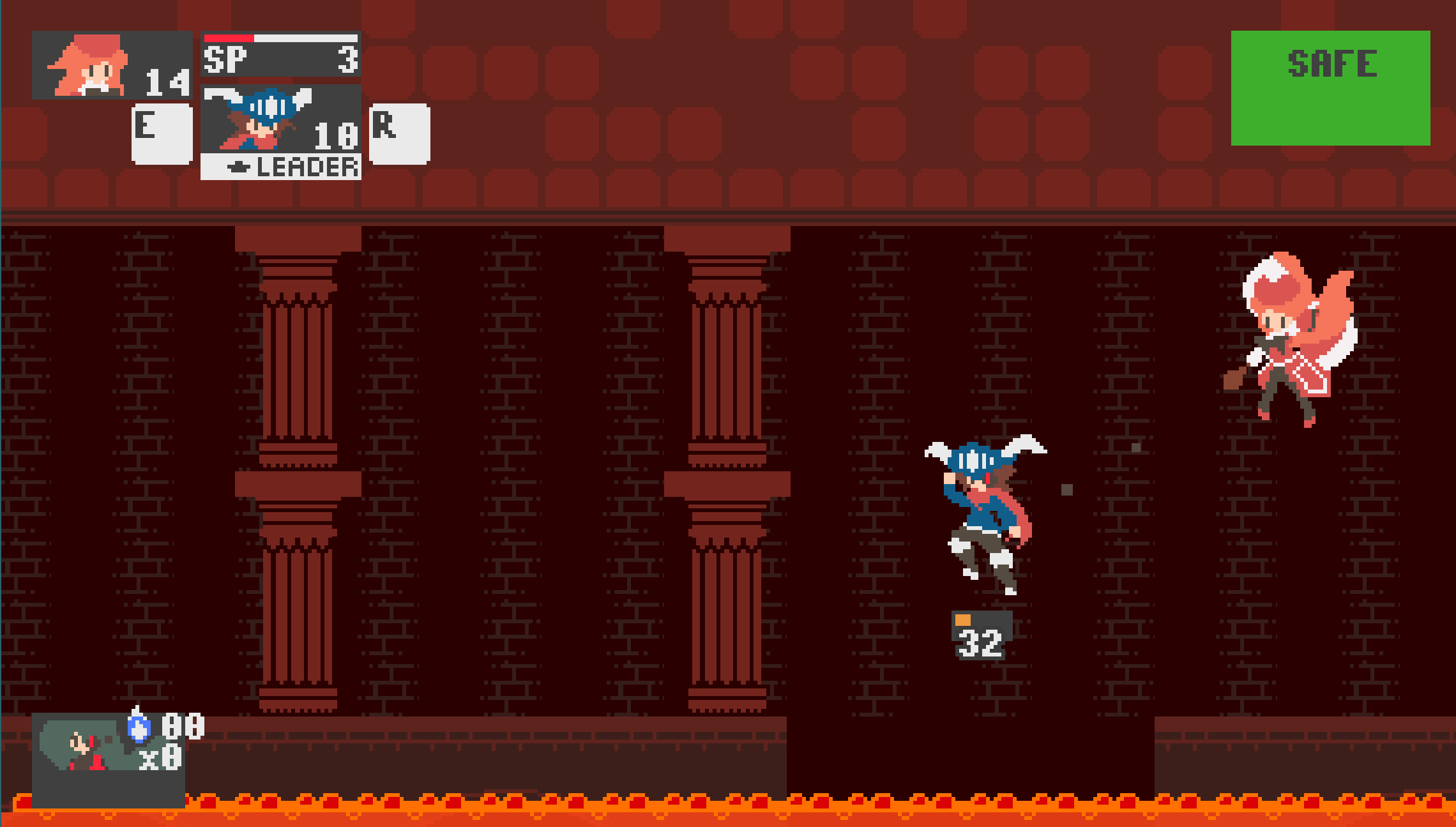 Ethan’s Bunny Float uses a Stamina System. The stamina is shared between the party, and regenerates over time. There should be some other systems using the Stamina in the future, such as the Bounce, which currently can be overpowered as you can indefinitely jump from foe to foe without a care in the world (even though it is fun… I promise I won’t make it too overwhelming).

When it hits 0, Ethan will fall. Stay on the ground to regenerate stamina. Jumping or falling will stop any recovery until you’re back on the ground.

Looking at the screenshots above, you might have noticed I did some spring/summer/autumn/winter cleaning (I forgot which season I’ve done these changes) with the HP related HUDs.

On the field, the leader switching HUD with your HP and SP is now more compact. I’ve tried something even more compact and linear, but it wasn’t very intuitive, so this is the next best thing.

In battle, we’ve moved the HUD of HP and SP to the bottom of the screen, which is quicker to read than forcing your eyes up. One good result of this is that the battle scenes are now more centered in the y-axis, while as before, it felt a bit too low, almost on the edge of the game window.

Thanks for reading! I will write a post to let you know when either the demo or the Kickstarter is up. When the demo comes out, I do hope you’ll be able to enjoy it.