New characters, new animations and interview are expecting you in new update! 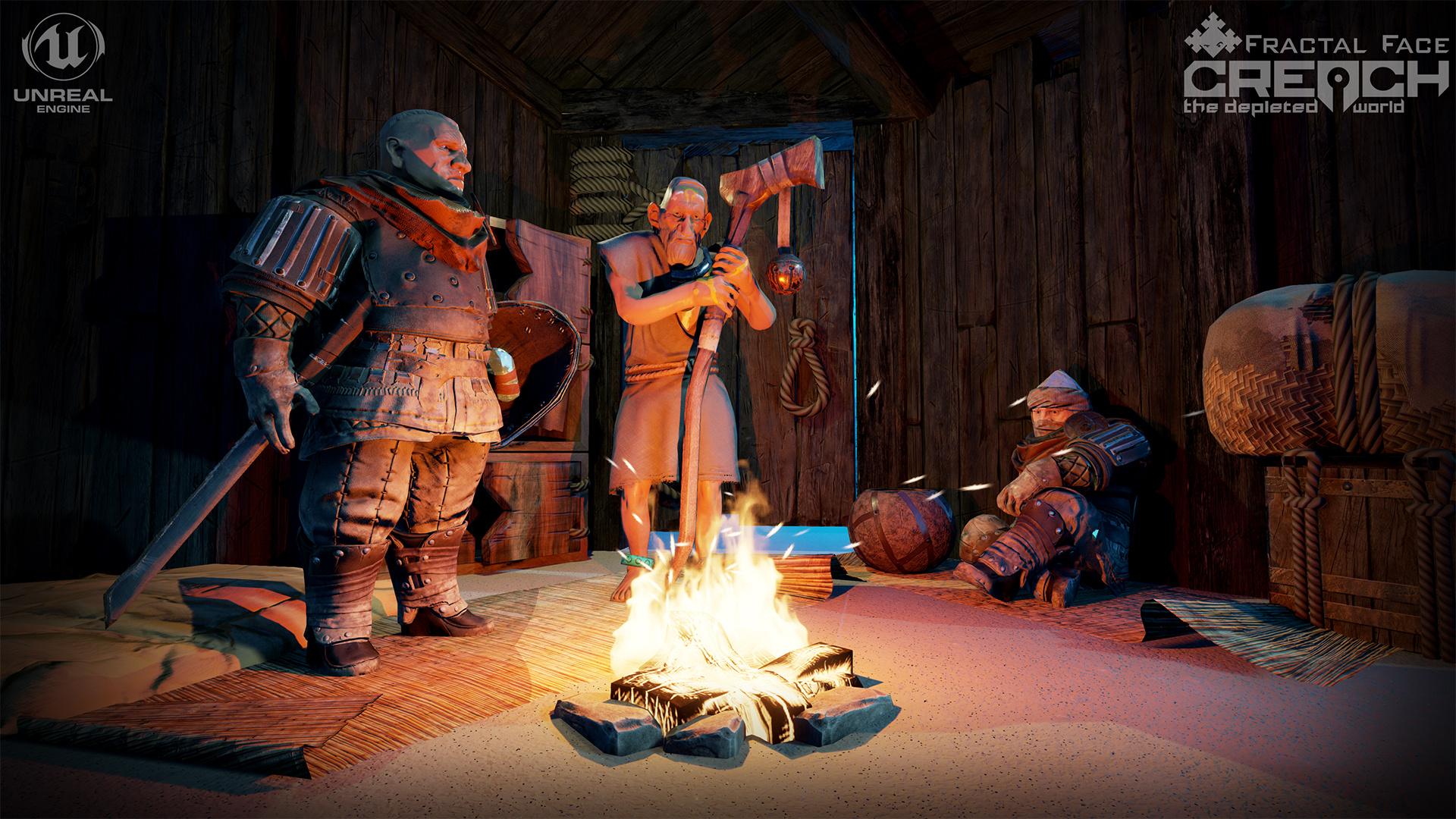 In this update we want to show you some new animations and new characters. Here we go:

The old man on the GIF above is the Elder, and he's the leader of Sterk's tribe. He looks tired, and he actually is. His life is all about controlling the tribe and making sure everyone has food to eat and a place to live in. But as far as he's got used to the power he has and to the tough decisions he makes every day, he has lost some humanity, and is hard to be convinced in anything that contradicts his own view. Sterk will meet him in the starting location at the beginning of the game.

Now you can heal Sterk by pressing the middle mouse button. But don't think this makes you invincible...

... you're still going to die a lot if you are not cautious enough. But when Sterk dies, he'll be beautifully resurrected near the last activated obelisk. Make sure you don't die too much: Sterk doesn't like it.

We're also posting an interview with Andrey, that was made by a cool guy called Xexor (here is his channel on YouTube). Under it you can also find a list of questions, that've been discussed in this video.

Xexor: What is it, that has been depleted from the world of Creach?

Andrey: Creach has its long and tragic story. It came to the current state as a mostly deserted world with a lot of dangerous places in it. As for the name of the game, the word 'depleted' reflects not only the state of the world, but the state of the people as well.

X: Sterk is the main character you play, he is an older man in his early 50s, as I suppose. Is he just looking for an adventure at this point at his life, or are there any specific events or threats that prompt him to go out in the Creach and explore it? What's the idea there?

A: Sterk is not an adventurous type of person, he is more like a conservative person, as many people, who've passed their age of 40 or 50. He has his own background like a really tough life with quite complicated relationships with the people of his tribe. Some certain events occur, so Sterk is actually forced to discover the world around him, and he comes up to understanding that something's completely wrong around him. This and the love for his people makes him to discover the true story of Creach.

X: The website describes a little bit about the game. One point I read was 'try to remain human in this rough world'. What is the ongoing threat while adventuring that you have to watch out for, something that makes Sterk no human anymore?

A: Along with the dangers that we've shown in our updates: golems, spiders, or the traps - there are also some other dangers: ancient technology, mechanisms Sterk will face. He will actually call it 'magic', and the people of his tribe will call it 'magic', because they have no idea how it works. This technologies could influence Sterk's worldview and his decisions and even himself, his inner traits. So it really will be a tough task for Sterk to remain human in this world. Some of his decisions can make players to think about their own life in our real world.

X: I've seen some early videos on your site. Among those, I saw one that *I believe* was character creation and a different one that was selecting items in your inventory. Sometimes games will allow a lot of flexibility like you can craft items, and the game shows different possibilities in how you can put some items to make another item you want. For example, Guild Wars and Guild Wars 2 both allow you to use dyes to change colors of what you're wearing. So what is the level of flexibility is there with equipment in Creach: The Depleted World?

A: That's simple. What you've seen is just swapping items in the inventory in order to gain different characteristics. As for the customization like putting dyes on your armor and changing its appearence any other way, there won't be any possibility to do so in the first release version of our game, but if the community decides so, and if we think it's okay with us, we'll implement it in the game.

X: You mention on the website that you might be able to obtain some epic weapon in the game. Is finding items in the game more like finding them along the way, or is it more like getting clues where those items are? It doesn't seem like you have the crafting system in the game, but maybe there's something that I've missed.

A: We're not implementing a crafting system in Creach: The Depleted World. As for the epic weapon and the clues and so on... We're making various sidewalks and secret rooms on the levels: if the player is interested in exploring, he'll be rewarded with some cool stuff. But it won't significantly ease the game process, just make it more fun, I think. So exploration of the world is key here.

X: Generally speaking, it sounds like it's mostly a dungeon-crawling kind of a game. Are there really quests in the game, or is it freer, and you just go around and see what you can find?

A: Well, we have the main quest, like beating up the bad guy (or not the bad one: I've told you about the question of morality in the game). But also we have some side quests, and the player is free to take them or not. As far as I am responsible for this part of the game, I'm trying to make the quests more interesting, not only like 'go there and kill ten beasts', but also something like investigation. In the final version the player will be free to go to various locations, complete side quests or find more interesting content. In this version we're putting a linear quest: Sterk starts his adventures in the Temple and then goes to the Ancient Aqueducts. So there's no flexibility here: player can visit no other places except the Temple and the Aqueducts in the current version, but as we continue developing new locations, we'll give more freedom to the player.

X: Currently this game is being developed for PC, with plans for porting to XBox One, PS4, and Mac if enough money can be raised through donations. Is the planned release a digital download, like on Steam or Gog.com, or are you going to have physical copies shipped to stores?

A: It's all true about the digital download, we are planning to go into this option: we are planning to launch a Steam Greenlight campaign, we also may try GOG.com and Desura and Humble and some others. I think it won't be bad for us, because different people prefer to buy and download games via different platforms.

X: Right now language support is in Russian and English. If enough financial contribution is given for the game, can you speak to the order you have planned for additional languages?

A: We have our own reasons for making a specific language order. Except for the Russian and English languages, we'll need additional funds to translate the game into other languages. The order is quite flexible, but we have a priority for the Japanese language, then for some Western European languages, like German, French, Spanish and so on, then some other Eastern languages, like Korean and Chinese. We'd love to translate the game into every language, but it this is all about money.

X: There are various locations in the game: you've talked about the Temple and the Aqueducts. Can you briefly describe some other locations in Creach that you're planning to make for sure?

A: We've planned various locations like some castles and some deserts and so on, but before going into it, I'd like to explain why they are so different in the game. It's quite simple: Creach has its own story with a tragic conflict in the past, and it has changed parts of the world dramatically. For example, the desert used to be a flourishing part of Creach, but it got deserted by *heavily spoiling*. Exploring such locations and observing their destruction - self-destruction sometimes - is really interesting. Some parts of Creach have remained flourishing though, because that conflict didn't touch them. That's why the game has very different locations, and we hope this makes it more interesting to play and to explore. Coming back to your question, we have a lot of ideas for the places the player will visit in Creach. The Aqueducts themselves will change as far you go deeper through the level. Also we have planned a desert: a rough territory... you know, what desert is, we've got plenty of them on the Earth. Then, we're planning a castle in the hills, in the mountains, where it's cold and sometimes creepy, because the castle is abandoned, as mostly everything in the game. Then, something like a huge self-destroying mechanism: if you can imagine a huge watch and walking through it, you're close to depicturing that location. We've got plenty of that stuff, but we need time to make all of it.

X: I don't know whether this game is going to go to ESRB or PEGI or one of those rating companies, but what would you say about the probably recommended age level in America, maybe?

A: For the gameplay itself, I think, there shouldn't be a high age level, because we don't have any mature scenes like cutting heads off or something, or any real horror scenes, but the story itself has to do with people who - I don't know really - are older then 14 maybe, just to make sure they understand some of the most mature ideas correctly.

If you are interested in further discussion of those questions, make sure you watch the video first, because the answers are introduced quite briefly.

Thank you for your attention! Stay with us for more content and updates!