Lots of room types filled with all kind of dangers and gifts. Survival is not assured, but you might end up with a really nice gun.

Hello, redneck fans! Bruno here again with a new devlog about Immortal Redneck. We’ve already talked profusely about how we create Immortal Redneck random levels. We are really proud of our work in that particular area, but all of that would be worthless unless the rooms used to create the level layout are really great. Hopefully, we also worked hard on designing them, and that’s what I’m sharing today with you.

There’s something we want to insist in because it might confuses some of you. This isn’t No Man’s Sky, a game that creates everything proceduraly. We don’t do that. We randomly generate the maps, the layouts that acts as floors for each pyramid.

The rooms themselves, the spaces where you move, jump and shoot, what it really matters after all to the player, they are designed by us.

They will be differently placed in the map each time you play, of course, but we chose to design them one by one so specific elements could be placed as we wanted. Immortal Redneck is not the first game to do this, of course. Awesome games like Rogue Legacy or The Binding of Isaac do something like us.

With that in mind, we can just tell you what we wanted: to have a lot of variety, but also very peculiar and specific rooms.

From lava to platforming

Immortal Redneck has rooms that work in various ways. Even if most of them are ordinary and different sized rooms are filled with enemies hordes, sometimes you’ll see yourself in a very unique place. We have some screenshots to show, but they are still a work in progress, so don’t be naughty if you see something odd: we are probably fixing that. 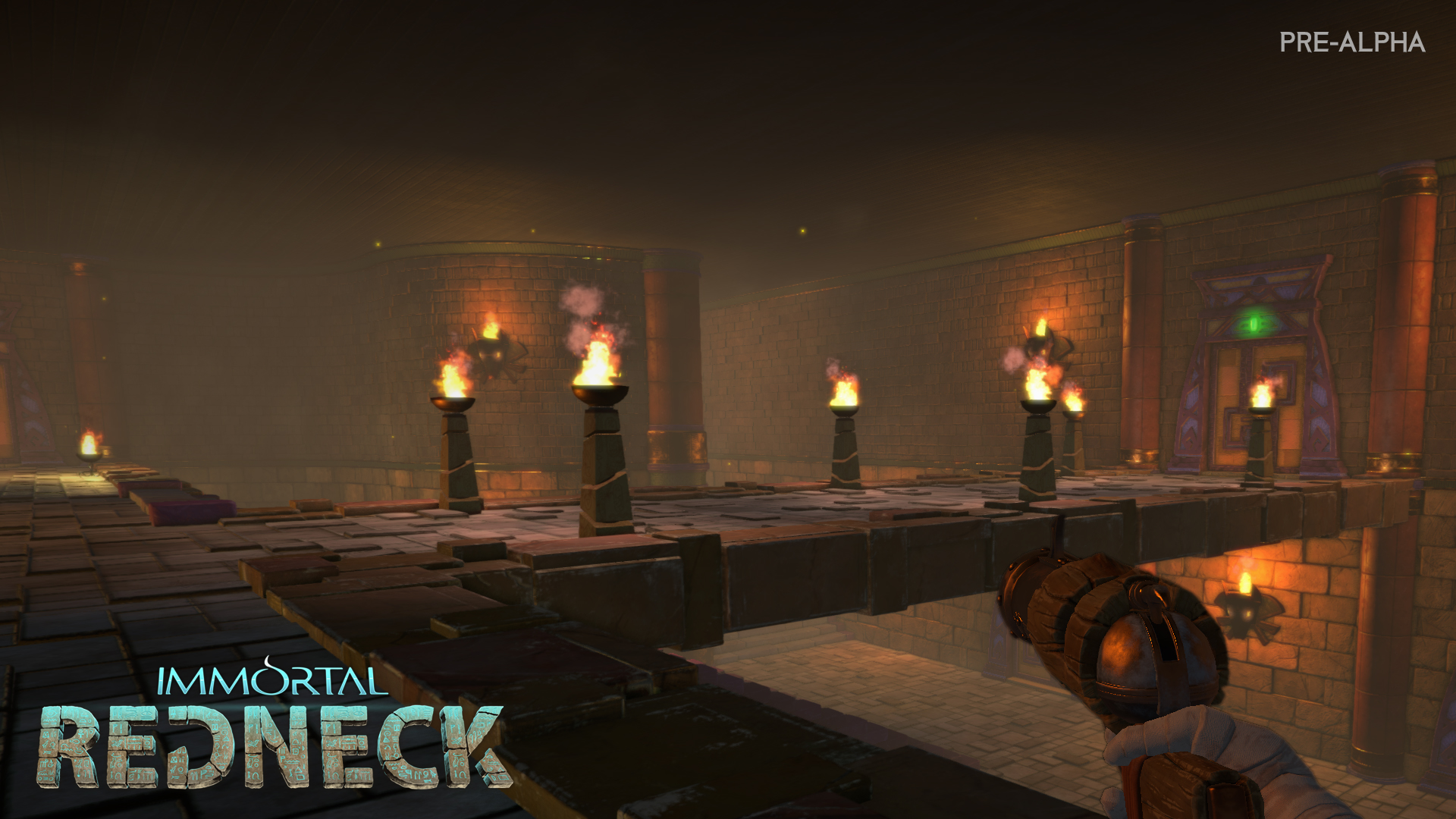 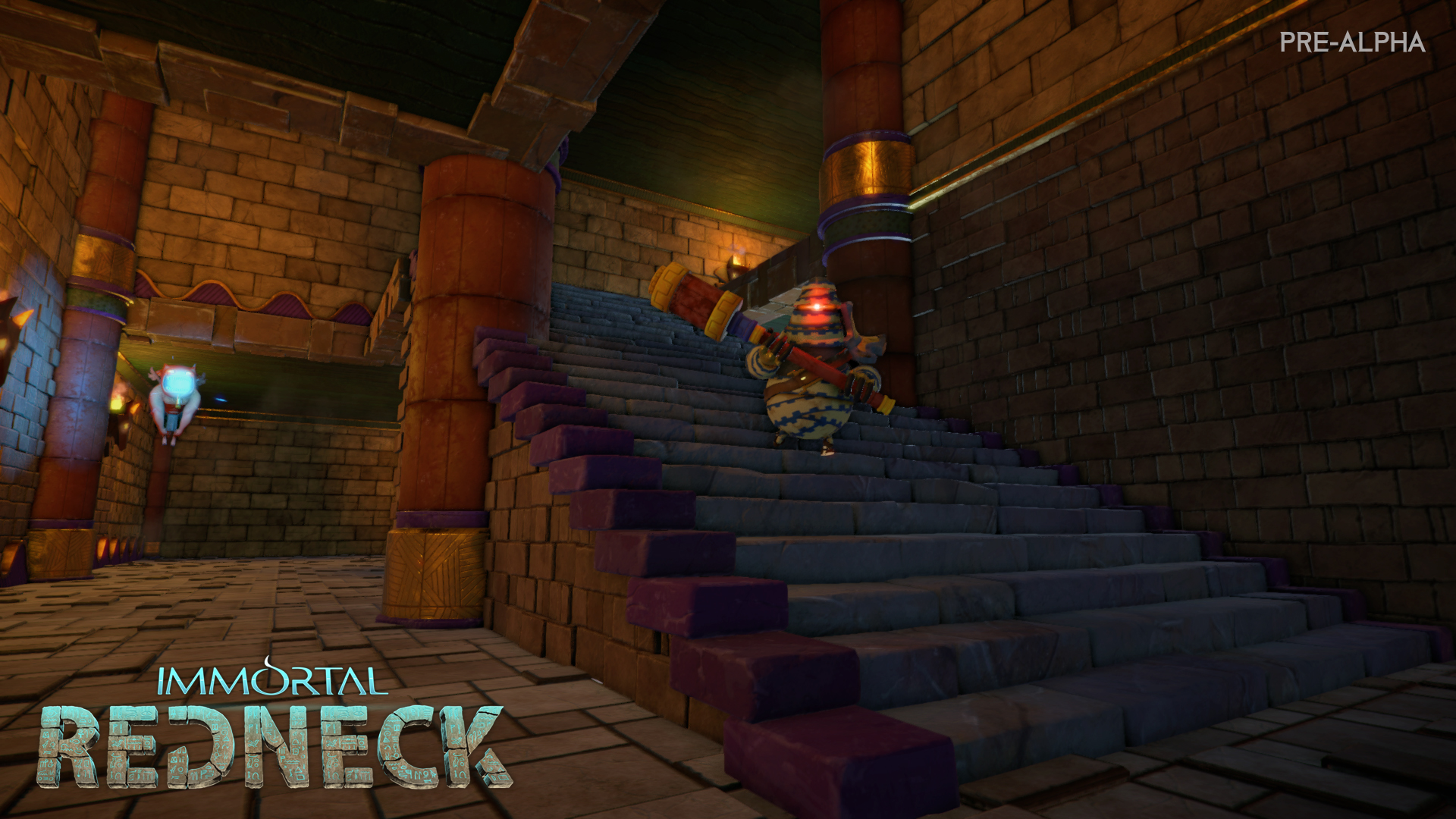 For instance, you might get into a room with lava, a chest in a impracticable place and some platforms with some enemies. It’s obvious this won’t be easy, but you can always go back and try a different path. Since there are a lot of rooms and layouts, you might be able to avoid this one. You would lose the prize, but that’s the bargain.

This is what we call a Skill Room and there will be a different types of it: a room where you have to avoid any damage to win the prize; another one with a time trial; a room in which you’ll have to survive for a certain time before the chest unlocks; or even one that challenge you to open the chest without damaging any enemy. 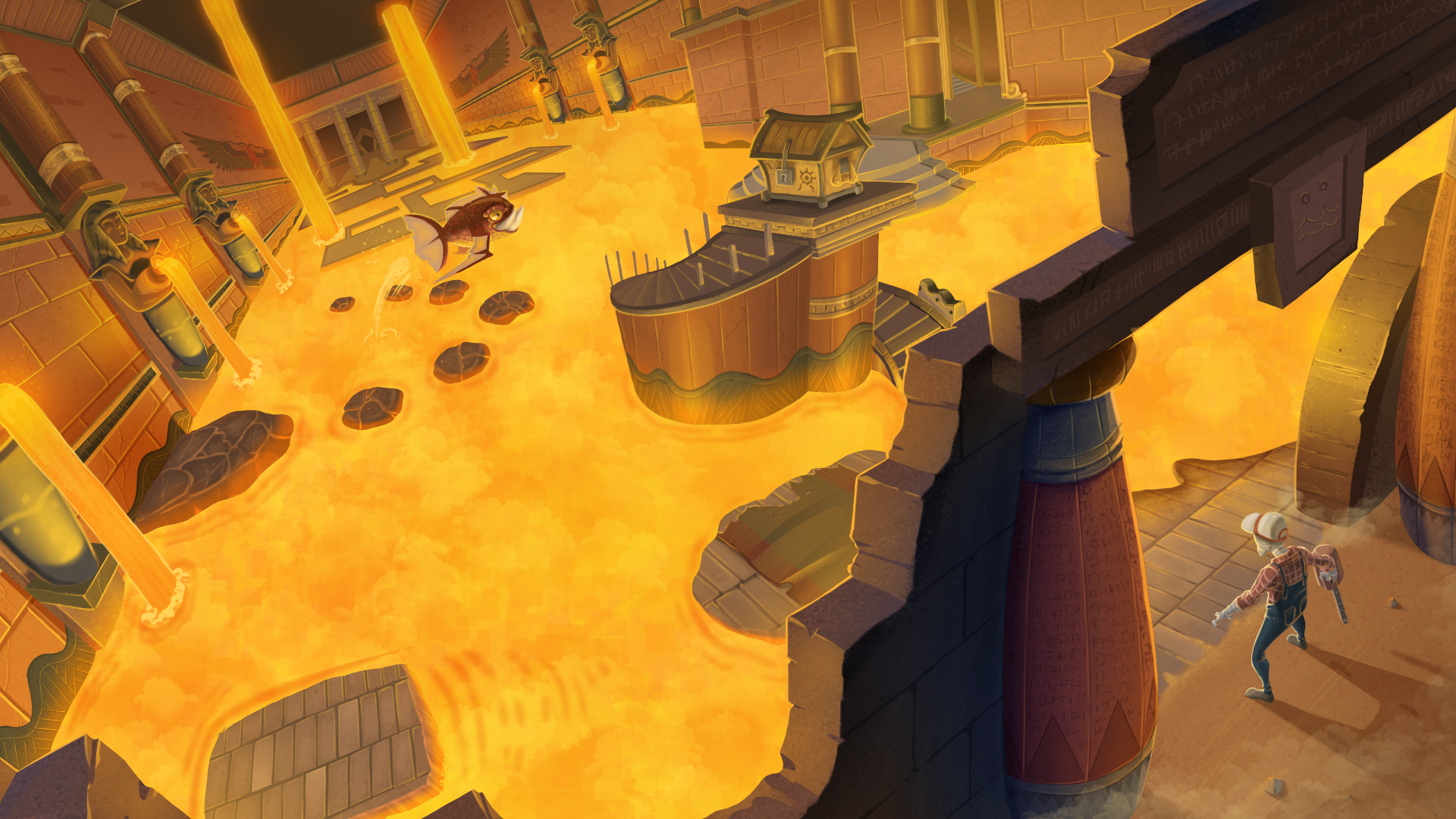 Don’t worry, you’ll also have rooms that give you a weapon or a scroll without having to risk your life in the process. Our Gift rooms are that nice. There won’t be a lot of them, though, but you feel blessed each time you find one. Right now, blue is the color that identifies this rooms, but we don’t know if we’ll change that eventually. 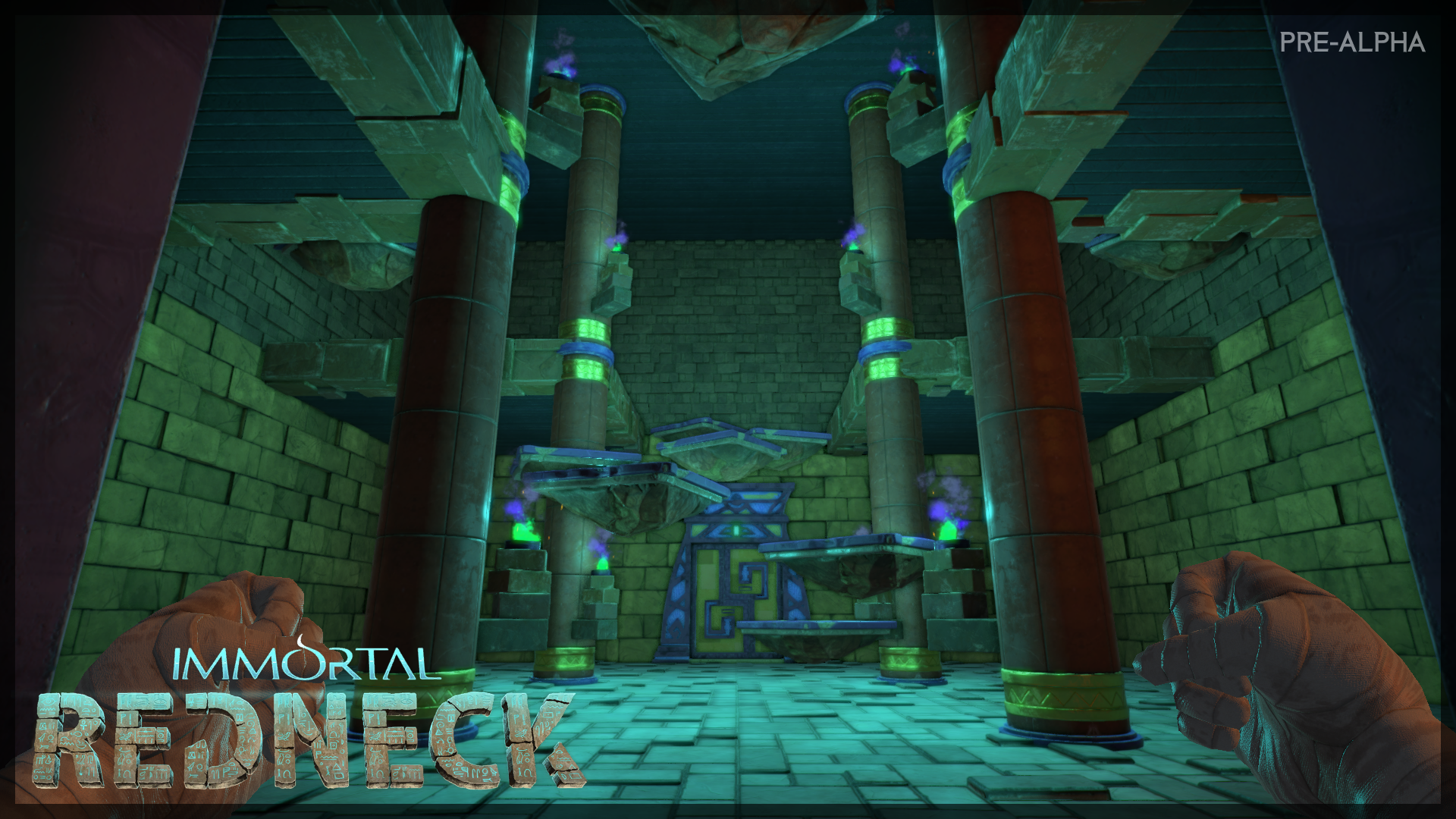 There’s also special skill rooms to challenge your aim, the Bullseye Rooms. Here, you either have to shoot some literal bullseye without failing one single shot or you have to hit a target that is very conveniently hided. You won’t win in this last scenario unless you have some special guns with special trajectories.

We are not sure about what kind of prize we should gift the player after this. Maybe a special merchant that sales specific guns? Maybe. 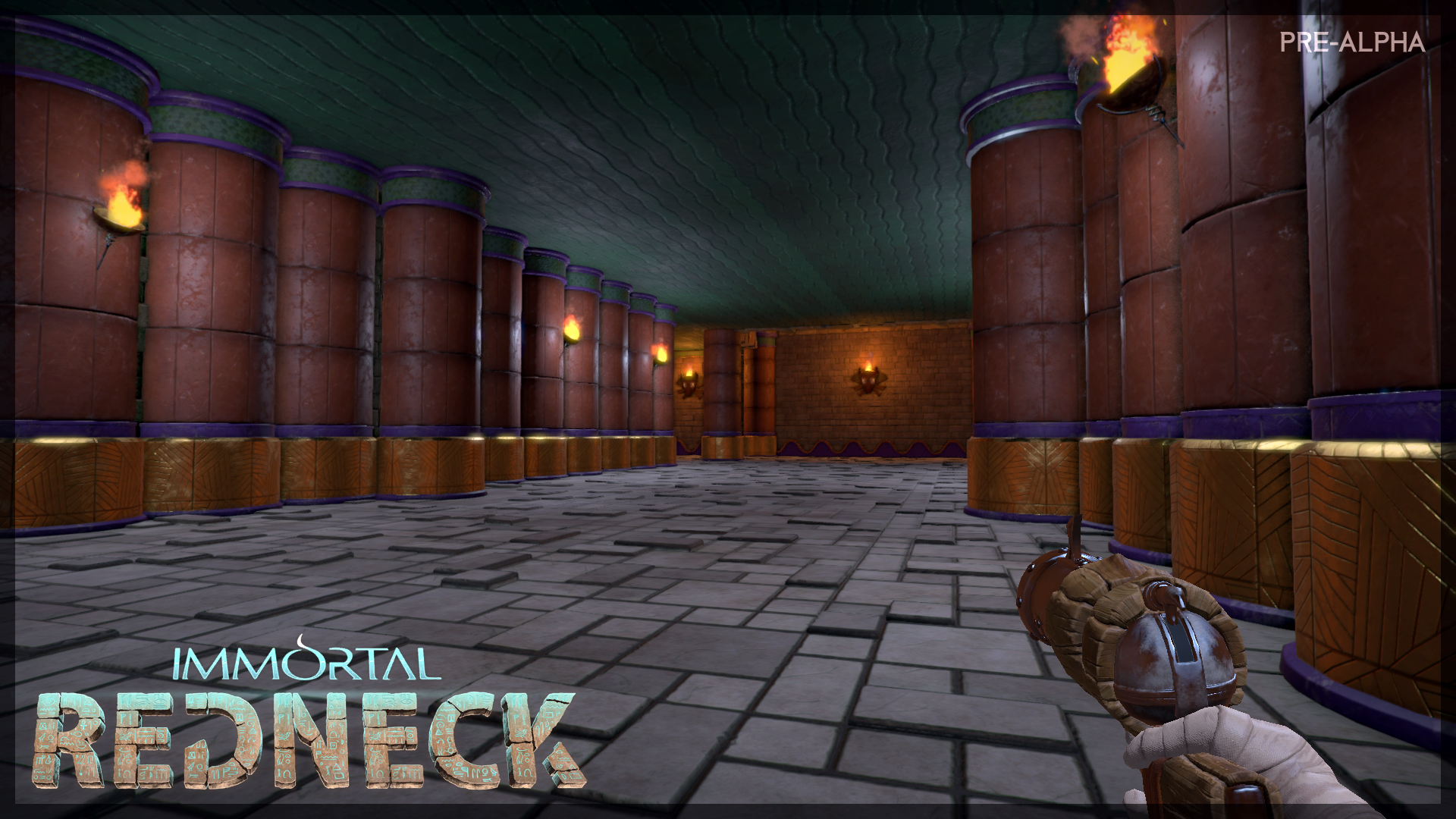 And last but not least, a very important kind of room: the floor connection rooms. These rooms are just normal ones but they also have some platforms that allow you to reach a new level inside the pyramid. You’ll have to use these connection rooms to ‘ascend’ into the pyramid until you reach the final boss. This is not the final connection room, by the way. It's very possible that we change the platforming for something easier, but we are not sure yet. 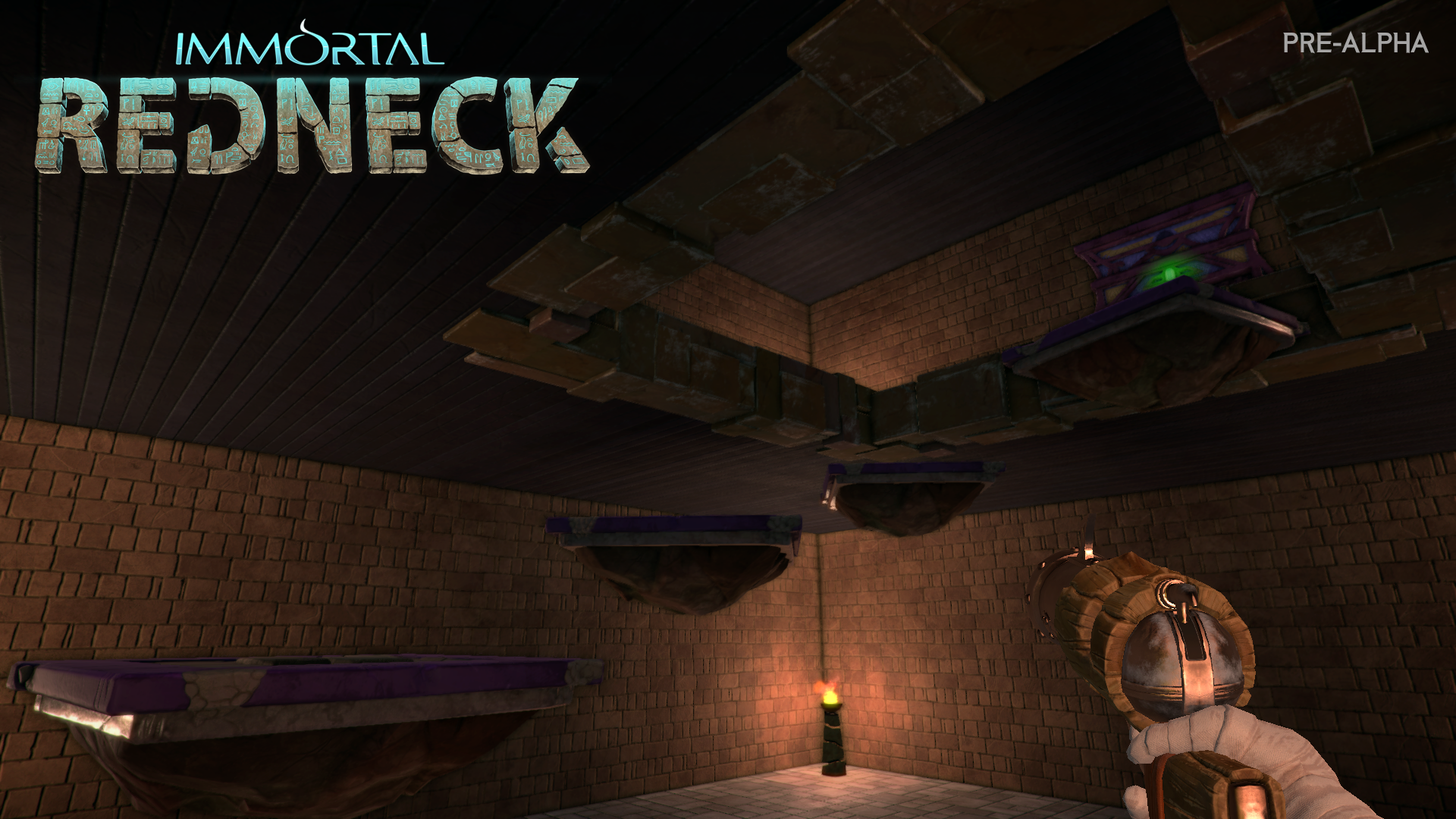 Oh, yeah, there’s also Boss Rooms. Two of them for each pyramid: one for the mid boss and another one for the final one. If you want to read a little more about bosses, come here. TL;DR: they are big and hard.

So yeah, plenty types of rooms and plenty of dangers. We’ll show you more about both of them in the future, I promise, but for now just think about how all of this will work: random layouts, different challenges in each room and enemies attacking you non-stop. We want Immortal Redneck to be really unique each time you play it and we can’t wait to show you how that is taking shape. 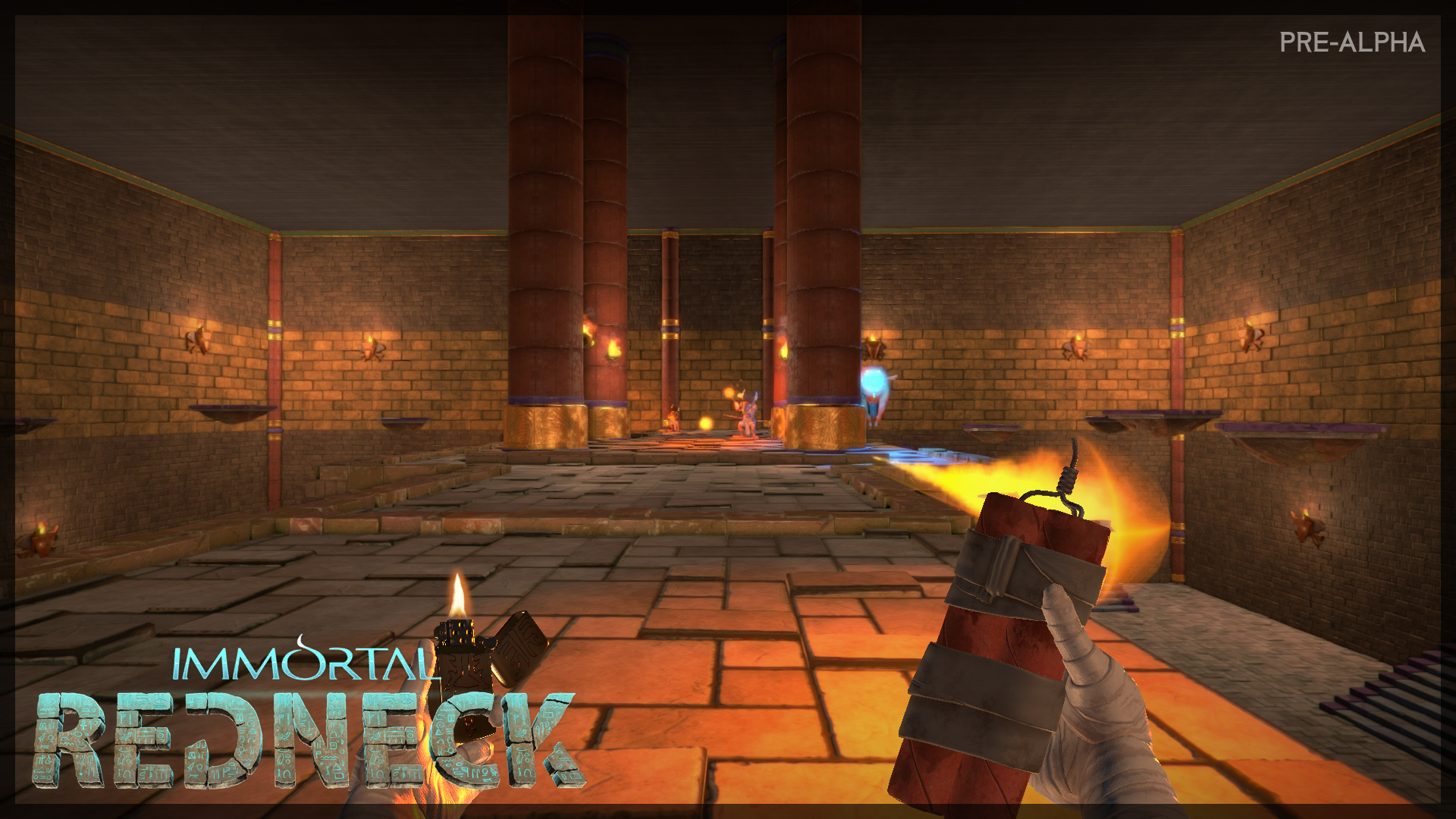 Oh, and it will be hard, but failure is part of the game experiencie: next time you get into a room, you’ll be better suited for the challenge, I assure you. Also, you might run into a gift price that gives you a gun you’ve never seen before but that works flawlessly and helps you go up the pyramid faster.

That’s why we think three pyramids full of randomly generated rooms are enough: you’ll spend a lot of hours just trying to finish the first one of them. And when you defeat the final boss and reach the second one… Well, things will get stranger. That’s all I can say by now, but you should note that each of the pyramids is different from the previous one in some ways.

And remember that whatever you want to tell us, just look for us on Twitter or Facebook. Just do it!