I've loved video games ever since I was a kindergardener in the late 1980s. As an adult, I've worked in IT in help desk and as an information security researcher. I could already do very simple things with web dev. But I never thought I'd make a game.

I remember my first exposure to video games. It was 1988, I was four years old, and I looked at the games on my half-brother's Commodore 64 with immense fascination. I really wanted to try those Commodore 64 games, but he was 19, and convinced that I'd ruin his precious machine.

When I was five, I saw my first television commercial for the NES (Nintendo Entertainment System.) There were one to two second clips in that thirty second commercial from several different NES games. I think Mega Man and Super Mario Bros. 2 was among them. I was as fascinated as I was with that Commodore 64.

Before I knew it, these words had slipped out of my mouth, "Daddy! I want a Nintendo!" I must have said that multiple times for about a month. Eventually, I heard, "Be a good girl, and maybe Santa Claus will get you one for Christmas."

Well, Santa Claus did get me my NES for Christmas 1989... my very first gaming console. It was the bestselling NES set with two controllers, the Super Mario Bros/Duck Hunt cartridge, and the Zapper peripheral. Although I wouldn't get any more games for it until Christmas 1990, I remember spending literally hundreds of hours the following year playing Duck Hunt and Super Mario Bros over and over and over again...

Eventually, I got a Game Boy in 1991, and an SNES in 1992. The Crawley household got our first 486 PC in 1993, and I discovered Where In The World Is Carmen Sandiego, and those awesome Shareware titles from developers like Apogee, and Epic Megagames (now known as simply as Epic.)

I taught myself web development starting in 1995, when I was eleven years old. I've made dozens of websites, sometimes for small business clients, between the mid-90s and today.

I taught myself how to edit Windows .bat files in order to troubleshoot various problems that the Crawley family PC would often have.

But somehow, with my passion for video games and the simple kinds of coding I taught myself, I never imagined being a game developer. I just thought that it was beyond my capabilities, a problem us women in tech often have.

But through being a Gamergate target (I wrote an article about how Gamergate and online harassment is an infosec problem), I learned about a number of different female indie game developers, such as original Gamergate targets Zoe Quinn, and Brianna Wu.

I've spent the past year or so teaching myself Python (multiplatform), and Java (for Android dev.)

I love Visual Novels. They tend to be technically simple games (compared to massive AAA openworld RPG FPSes and the like.) They're story driven. My late father was a somewhat popular novelist, so when I was a little girl, he taught me a lot about wordcraft and storycraft from an industry perspective.

So my first game is now at the alpha stage of development, a Windows/OS X/Linux/Android Visual Novel titled Hackers Versus Banksters.

I consider the game's current phase alpha, because my game just got to the point that I can run it as of last Wednesday. It's got an awful lot of bugs, and I'm now debugging as much as I can before my game enters beta, when I'll share my game with a dozen or so beta testers (mainly my friends.)

Here's a buggy screenshot if you're curious: 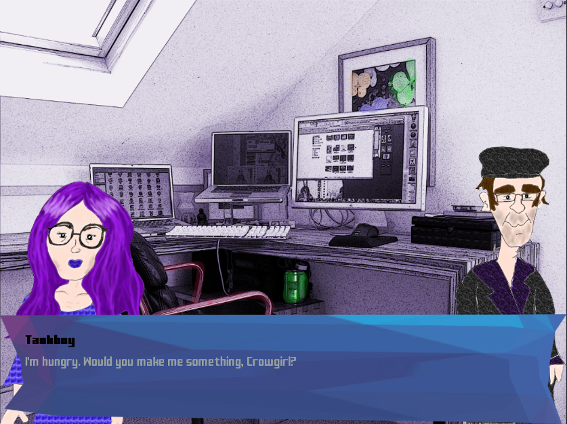 Already I see that I need to recode my character sprite positioning, and change my font to something that's easier to read. But otherwise it looks pretty good for the alpha version of someone's first Ren'Py game! My custom menus also work surprisingly well.

Hopefully, I can get my game in the beta stage in about a week. I'm working very hard, sometimes eight hours per day on this first game of mine. I'm doing all the code, and I've made over a hundred original art assets.

And I'm going to do something that many people think is really crazy... I'm going to release my game commercially! That would've sounded even crazier a decade ago. But many solo developed games, including Visual Novels, have seen some very modest commercial success now. Games similar to mine have made four to five figures via Itch.io, Steam, and the Google Play store.

If I can gross $2,000 or more from my first commercial game, it'll be a huge success as far as I'm concerned. Other people have shown me that it's a reasonable goal as long as I work very hard. The barrier to entry for game development is now lower than ever before.

This article is the first time I've written publicly about Hackers Versus Banksters. But now that I have a functional albeit buggy, running alpha, I'm taking the plunge.

You see, I'm well aware that over 90% of the time when a first time solo game dev says they're making a game, a completed game is never released. It'd be very embarassing to talk about the game I'm working on, and then it never sees the light of day.

Now that my game is executable and behaves in the way I designed it to, I'm confident that I can complete it by this spring. So I can talk about it now.

And maybe, if I keep writing about my Hackers Versus Banksters game development experience on Gamasutra, I can make a few people curious about my game.

So that's what I'm doing. I'm going to chronicle Hackers Versus Banksters from development, to crowdfunding, to release. I'm nervous because this is my first serious venture into game dev, and I still have loads to learn.

But my nervousness is coupled with excitement! Remember how excited you were when you worked on your first game? Now you can share in my excitement! And if you have any advice for me, I'm all ears.

Tweet me at @kim_crawley, I'd love to meet more game devs!