Posted by ValiantInteractive on Feb 4th, 2016 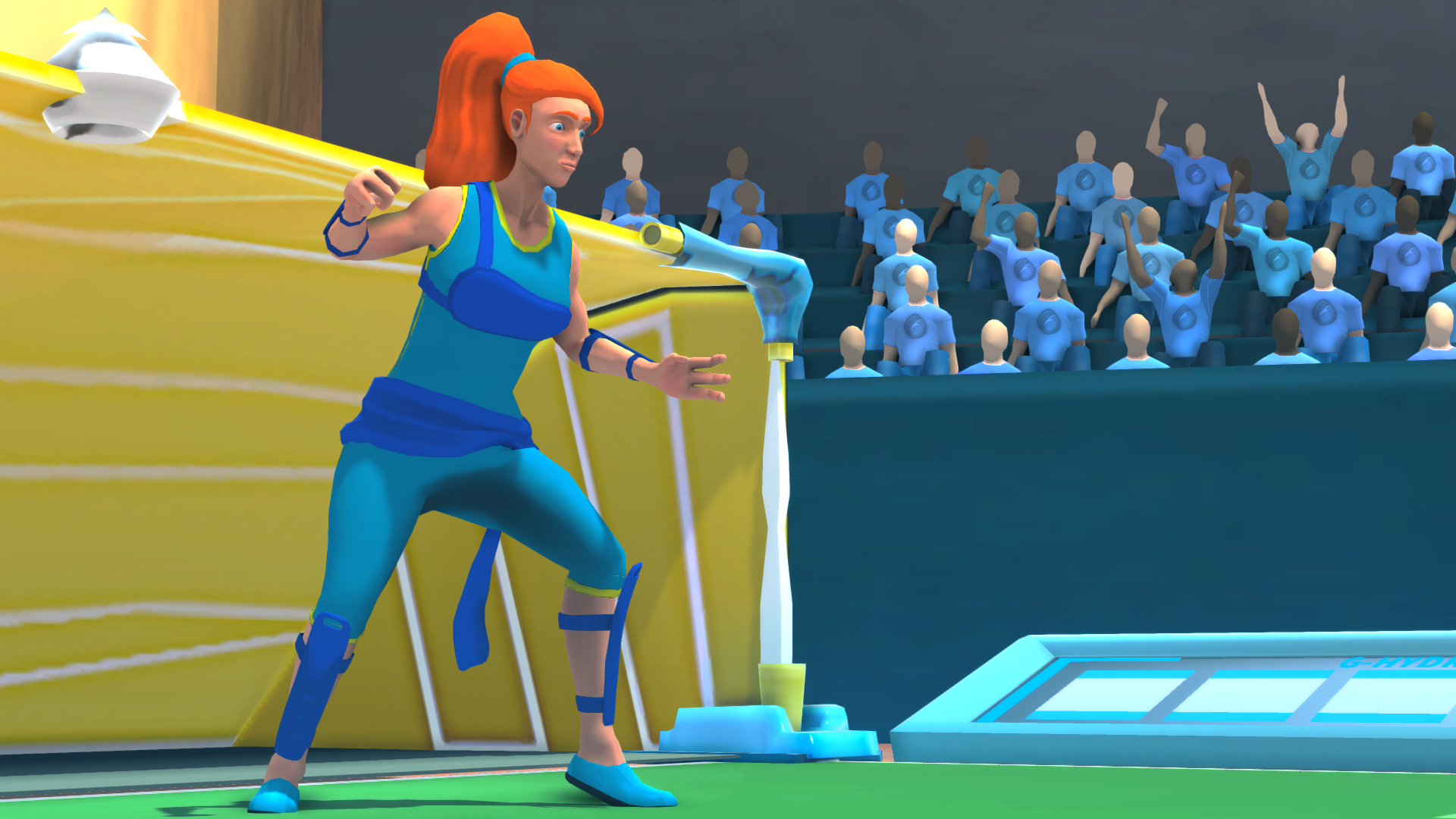 The current Gyrodisc Super League champion and crowd favourite, Jess is an all round player who faces each match with utter confidence. Similar to her brother john, she has a balanced moveset with a slight tendency towards speed over power. Reflecting her relaxed attitude compared to the uptight and serious John, she has physics-enabled long hair and a belt sash that flow behind her as she plays. 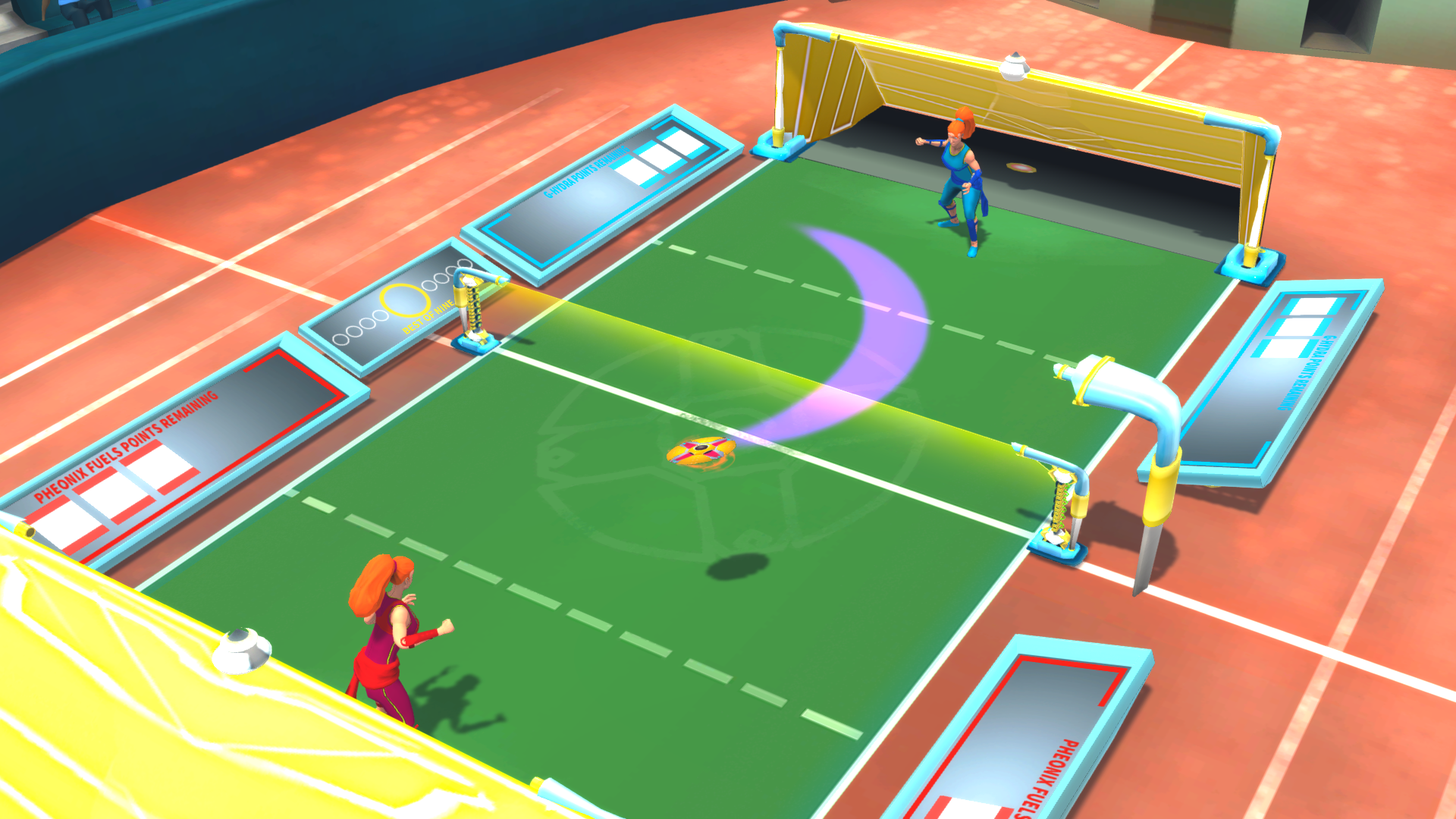 Her super causes the disc to spiral across the screen rapidly, bouncing wildly off the walls to keep her opponents on their toes! 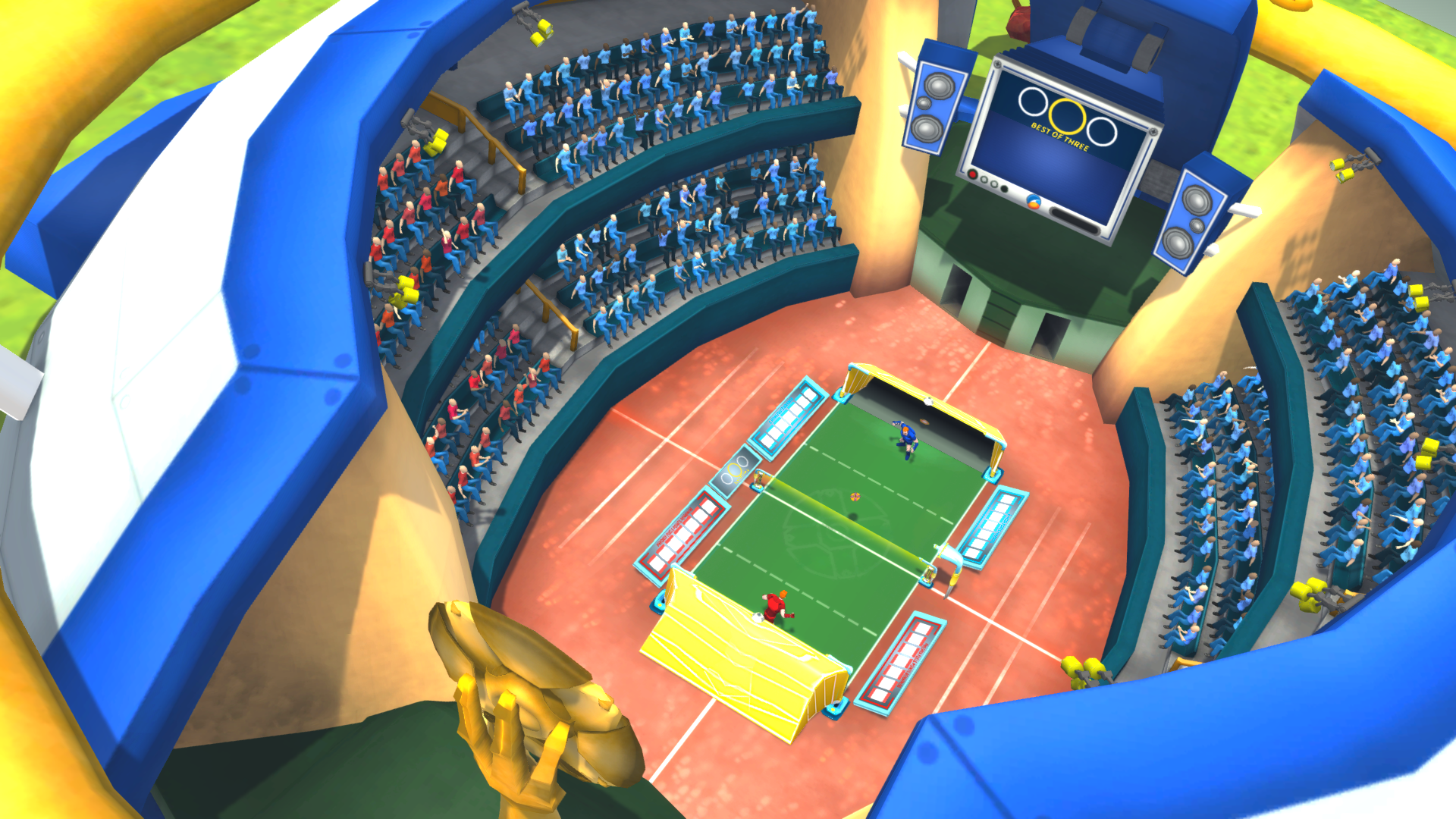 The aim of this model was to reduce the amount of flat, grey textures that were being seen in the game. Of particular importance was the floor- since most of the game is spent looking downwards, having the floor be a flat, grey plane was affecting how the game looked. The floor is now made of red clay (used in tennis courts) which warms up how the game looks and gives the edge of the screen a rougher, more interesting look.

Other changes include a new and improved giant screen towering over the stadium, barriers dividing the crowd into two masses of rival supporters and a giant gold statue of a hand holding a Gyrodisc adorning the far end of the stadium. 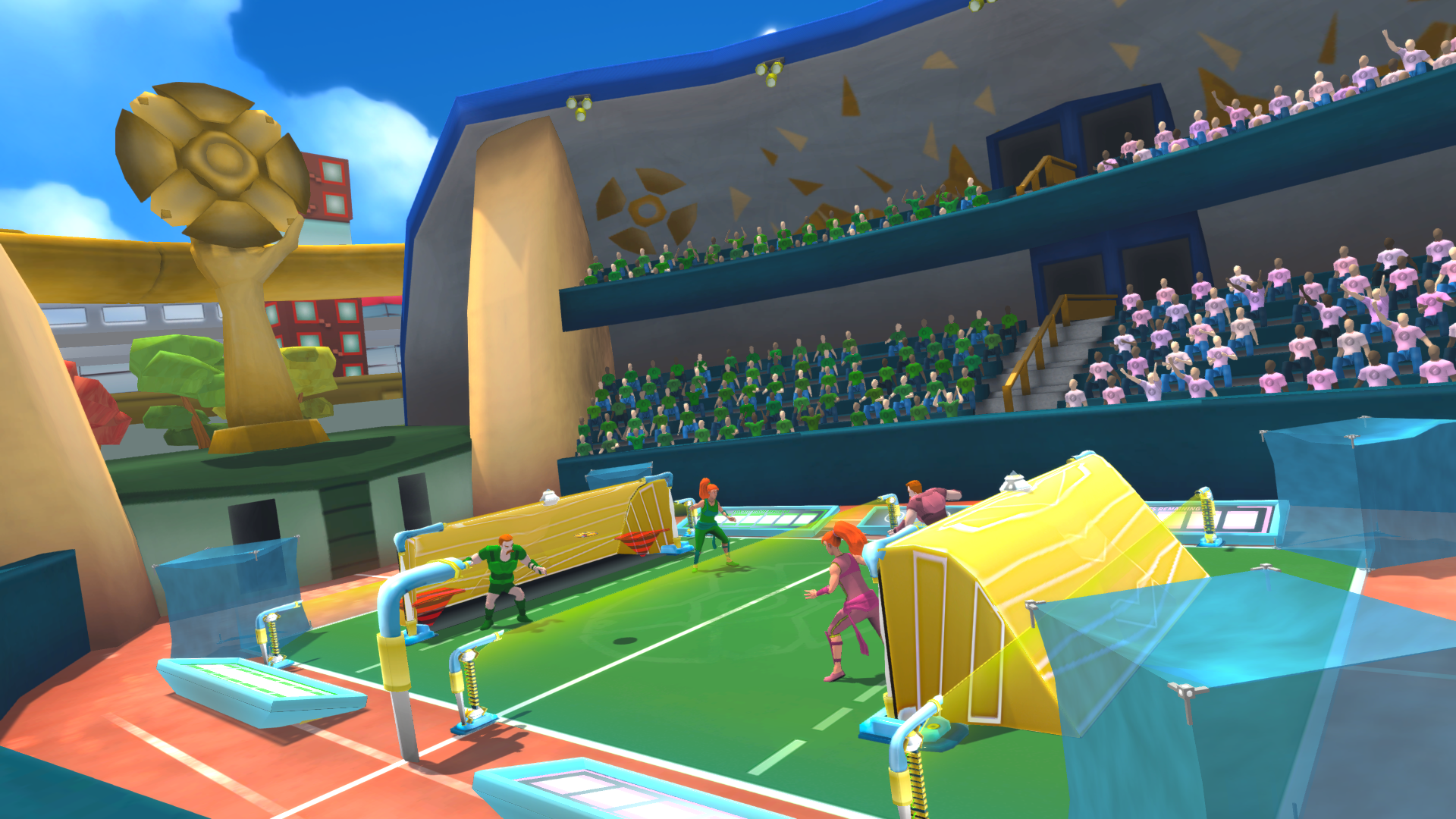 Players can now select different courts when creating a match. Courts are made up of several gameplay elements like goals and nets as well as more novel elements like bouncing blocks and score boosts.

Our first courts are “Vanilla”- our standard court from the Greenlight demo. “Wide on the Outside”- a wider court with score boosts on the edge of the goals. “Two Nets Two Walls”- two walls create more places for the disc to bounce. “Hockey”- the goals are moved away from the walls so the disc can bounce around them.

Even the slightest change of layout makes a huge difference to how the game is played, so we’re excited to expand our list of court elements and court layouts in the future! 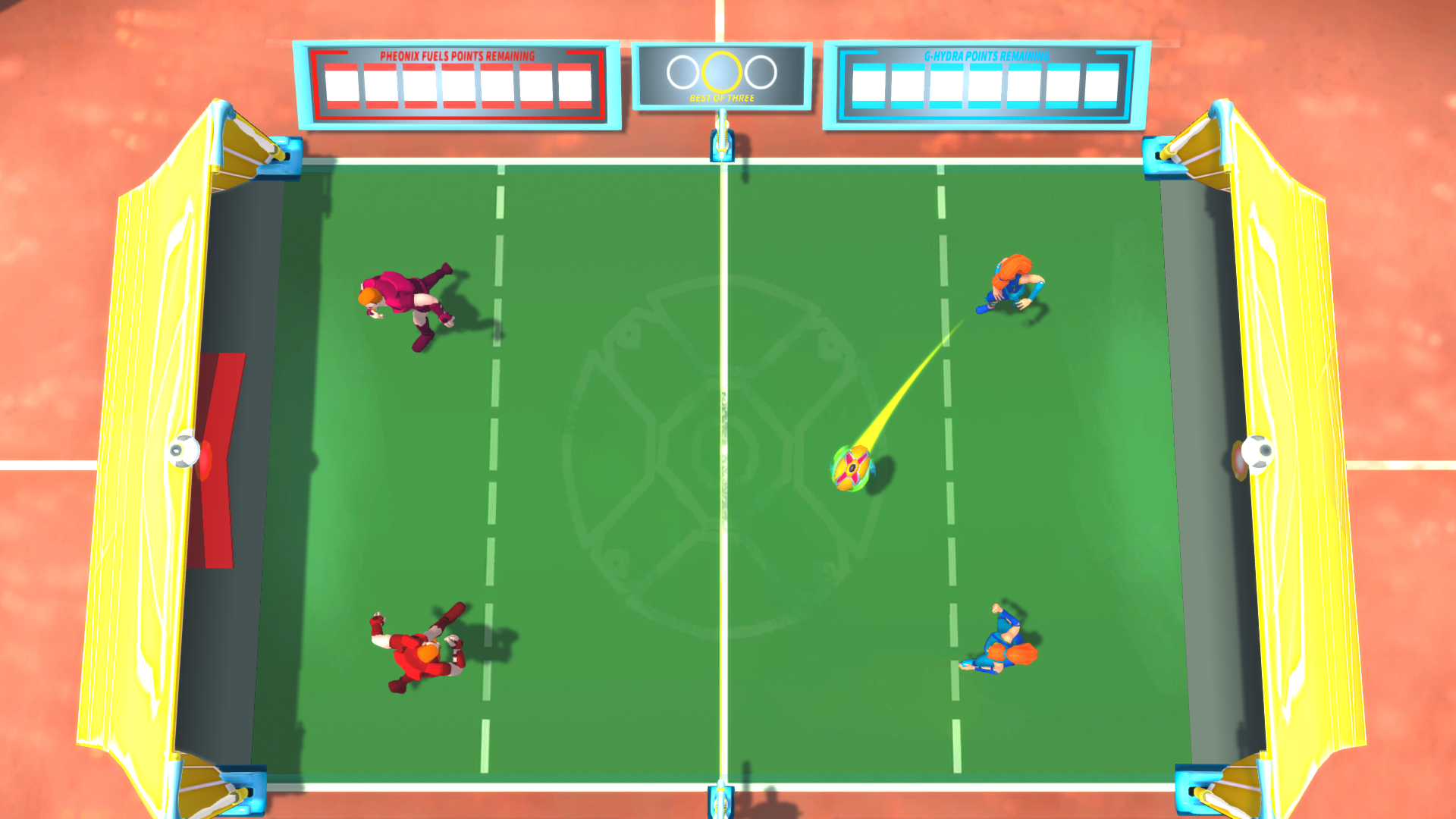 Following our feedback from the Greenlight process, we’ve been working on sharpening up our gameplay. We started by improving the foundations of the game, making sure our characters are less floaty and improving the reliability of how the disc bounces (especially in low-framerate situations). From there, we changed how our disc bounces and curves to incline it to travel horizontally. Finally, we increased the speed of both the disc and the players. All of this comes together to make our gameplay feel more aggressive and responsive. 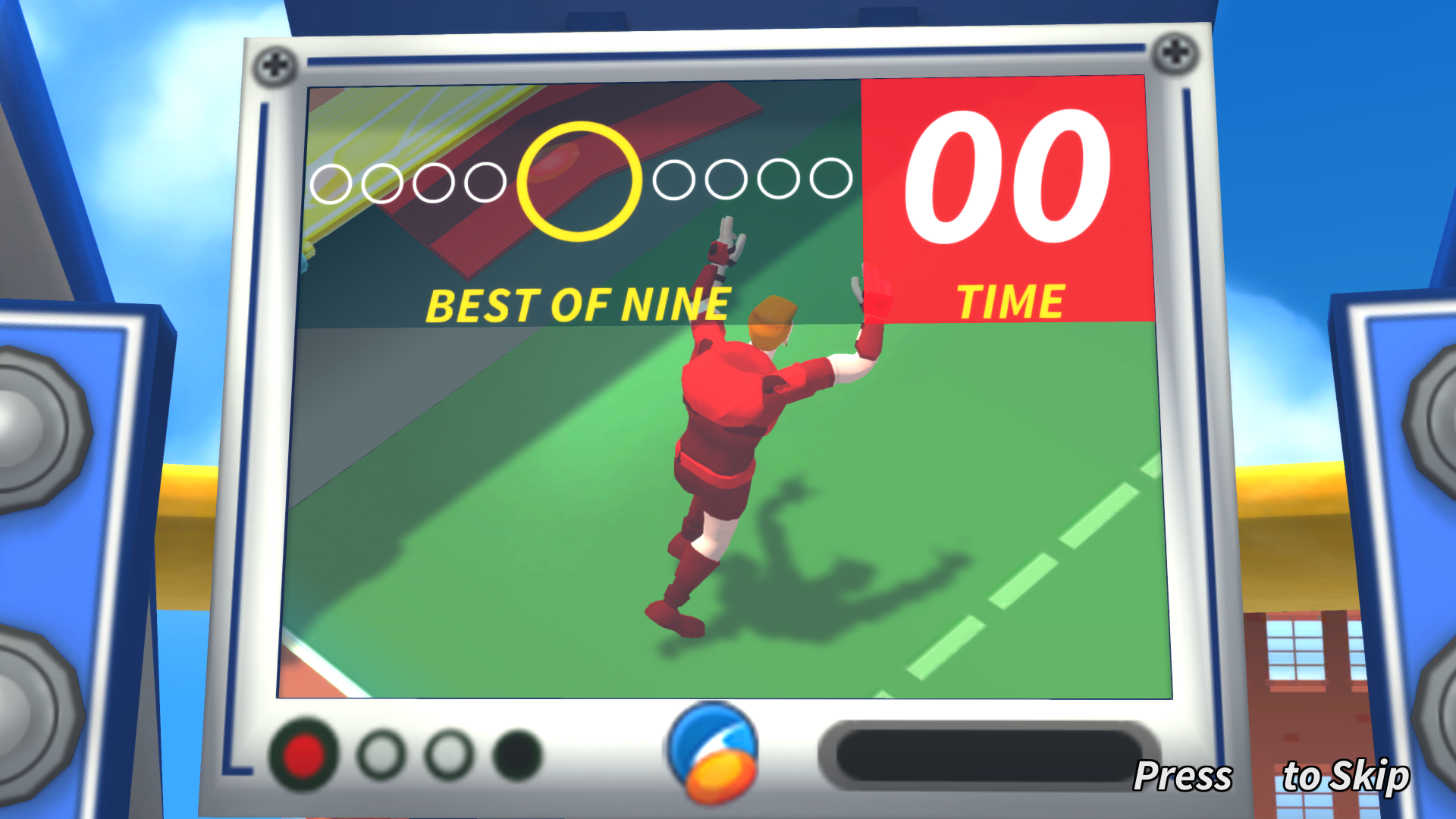 Players can now also customise their match with our new match rules. A 30, 45, 60 or 90 second timer can now be set for each round to pile on the pressure during matches. If the timer runs out causing a draw, the round is decided by a tense sudden-death tiebreaker. Players can also select the number of rounds required to win, changing a match from anything between a super-short one-and-done to a gruelling best-of-nine.