The new map of GUNS and ROBOTS represents classic American house. The American house is a multiplayer death match map, small in size to make the action more intense. Most of the deadly close-encounters take place in the backyard. The map features indoor and outdoor environments with many pickups and breakable objects to shoot at and distract the opponents. 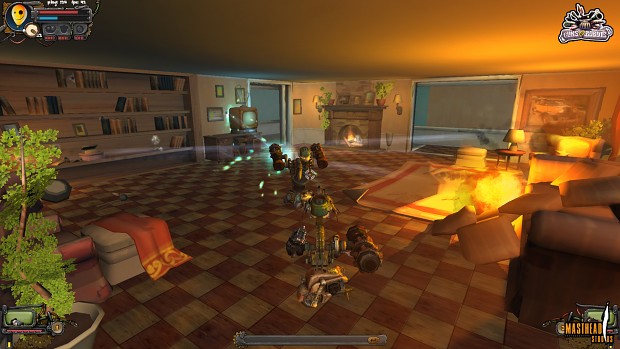 The new map allows players to test their robots in new situations and gives them countless hours of re-playable content. Dictated by the humor of its creators the map is scattered all over with dirty laundry, fun random objects and a remarkable swimming pool, which is difficult to cross. The maps appear randomly and players can not choose which map they will be playing on.

The desolated backyard is not a traditional yard with flowers but a torn-up deadly place where players will meet their opponents. The American House is suitable for the competitive players who enjoy adrenaline-pumping game play modes. There are many rooms to explore but players should stay alert for what hides behind every corner.

To give you a taste of what is to come, here are some screenshots:

About GUNS and ROBOTS

GUNS and ROBOTS is engaging free online shooter with inventive character design and an endless list of customization features. The game combines fun art with almost unlimited game play. The characters are able to move freely all over the maps, engage in battles, climb up the rankings and unlock various achievements. They will be able to choose their equipment from variety of weapons and over 150 different parts. The incredible battle mechanics combined with funny looking robots adds a whole new perspective to the genre.

Features of GUNS and ROBOTS

For more information about GUNS and ROBOTS, please visit: Play-gar.com or Facebook.com

Masthead Studios is an independent game development studio focusing on innovative and quality games bringing to its fans enjoyable entertainment experience. The company was founded in 2005 with focus on the MMORPG genre. The primary goal of the studio has grown into making high quality, original and fun games for various platforms. The team consists of highly experienced and dedicated talents with fresh ideas. The headquarters of Masthead Studios are in the emerging technology hub of Sofia, Bulgaria. For more information please visit
www.mastheadstudios.com