It's been really long time since our last update

. But it's not because we stall the project, it's because I'm too caught up in coding it, too much fun, too little time.

We have got many feedbacks and they address everything so I know the game has been improved, thanks to our testers.
Special thanks to Jonas Hünig - whom has put days testing for us and pointed out so many issues, it's really lucky we met him.

There is 1 problem that we can't fix: Grammar and Spelling error

. All errors that could be detected by us has been fixed but our English is not perfect and the tester whom pointed that out didn't help any further, other testers are from error (but not UK) and they admit that they can't find any error since their English is also not perfect. We could only hope for the best.

Have a look at our official trailer:

We improved our multiplayers match security. Since we have not enough manpower to create a real server-client model where the server handle all the logic, we compromised, here's how:
- We lets the loser of the match report the result so hacker can't send a ""I won"" message.
- We use webhook from Photon and Parse so when a user disconnect, the server will no, the hacker can't say his opponent disconnected
- For other simple tasks like shopping, identifying items, we just use the standard Client-Server line, client say he want to buy this item, server check if he has enough money and update the database, client then got the new item from the server

The chip UI has been improved a lot, we replace the letter icon on the chip storage with the actual shapes of the chips. We also use color to show chip's rarity, tell us if this looks intuitive enough.

Nothing to say about that since we only apply graphic to it, but it took too much time. I didn't think that it could be that long, all the pixel adjustment, all the calculation for multi-resolutions, font size consistency and much much more. Be careful on your estimation with any function related to GUI, trust me. And I'm really glad I chose to stick with the legacy OnGUI of Unity, it's actually made the GUIvery flexible and still loyal to the artist's design. 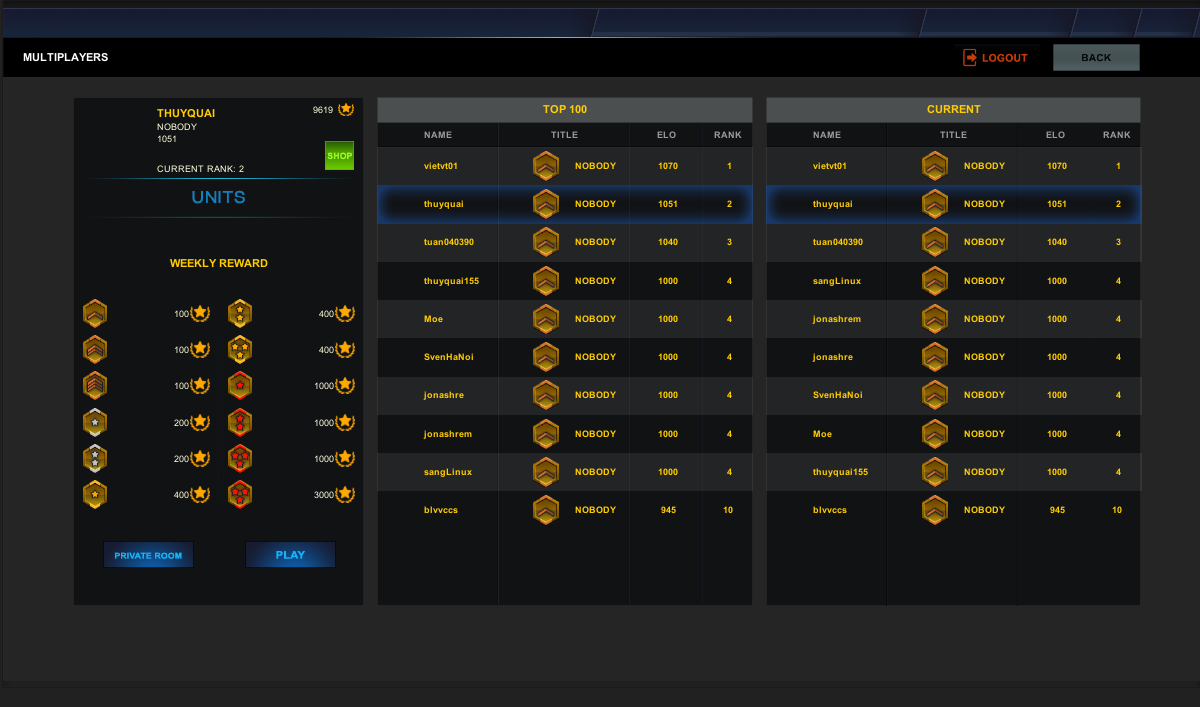 The Elo matching implementation is really fun, we create a room which only allow a range of ELO different from the first player in the room and wider the range every 15 secs to make the chance for a match bigger, nothing different from what everyone is doing.

Then there is a minor problem, when the second player come and start finding room, the first player is still creating room, so the second player didn't find it. He created another room. After 15 second, the fist player stop and start to search for an open room, but the 2nd player also stopped and start searching. The process would repeat forever. So we combat this by changing the waiting interval from 15 sec to a random number, 2 players will likely find each other event though they start searching at the same time.

Like any other multiplayers turn based game, we implemented a turn timeout feature almost like competitive chest, nothing else to say, all turn based games must have that

We also add a regen functions for both side base, so you don't have to battle to the death, you can now retreat and come back later, this function was introduced to enable more strategy options and we always feel like retreat is always an option in war. 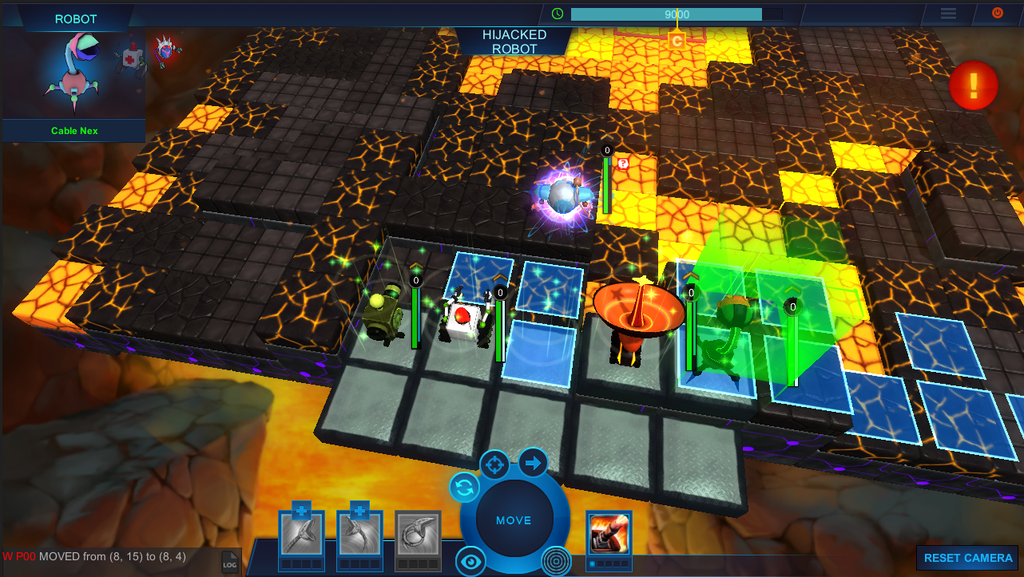 The destroyed units will now have a chance to drop items, it's just like RPG games, and the reason we think it's necessary is to make some surprise gift for players. Because non-predicted gifts bring more joys.

Apparently most of our testers hate it when the camera is locked for ANY reason, they don't care if we locked it on the important event, they need to be able to move around if they want, they need full time control, so we compromised, make the camera auto move to important event position but enable user to take control and override camera action anytime, another lesson learned.

World Map has a total make over in term of graphic, here's how it looks now, hope it caught your eyes 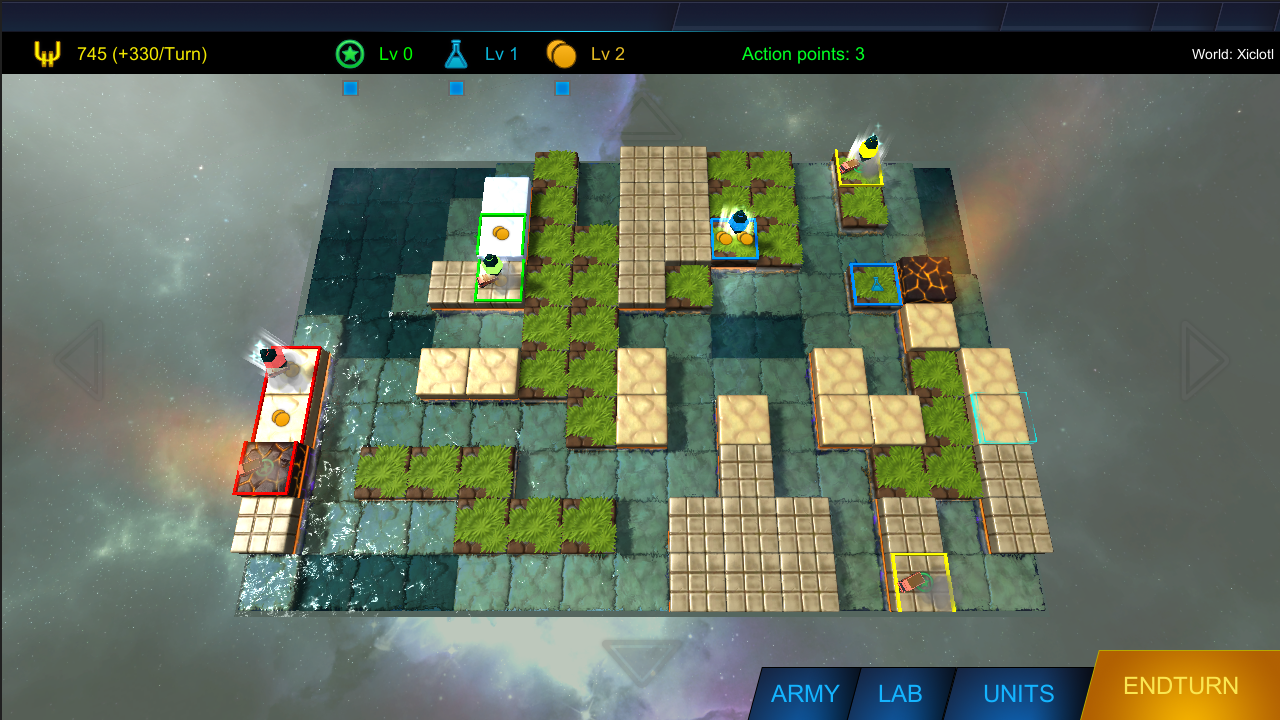 Each region will now has a specialty that improve your army power in general, and you could upgrade you region to further improve it. It could be focused on Military (affect the units directly), Technology (after the battle rules) and Economy (more money for campaigning and upgrading your army). 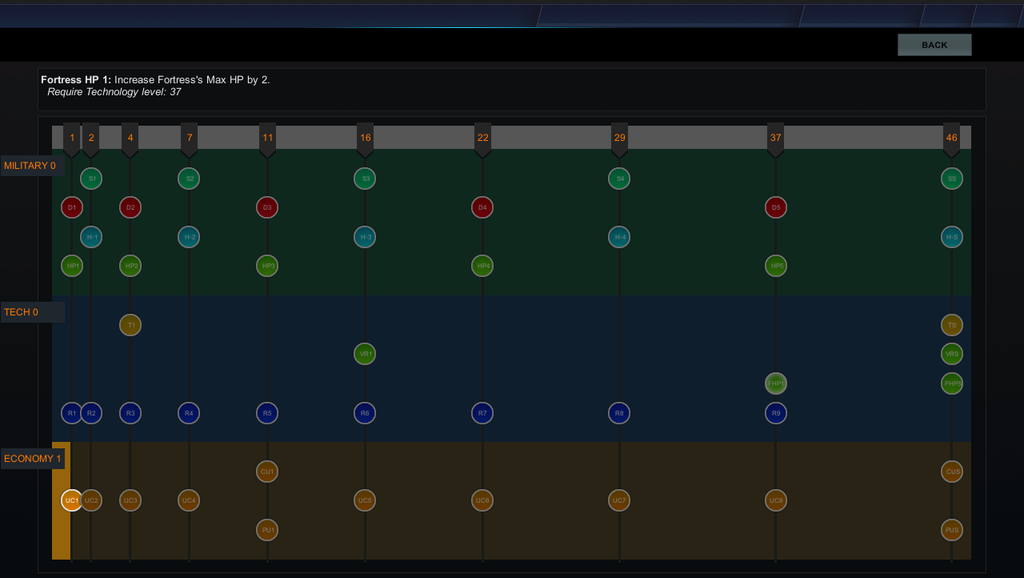 We also generate random name for each region because it's fun.

We remove more lines from tutorial dialog since our testers seem to skips most of them, hope this help, I can't be so sure about this so I can only hope.

We focus more on the representation of the skill, make sure players understand what they do, change the number texture for easier tracking how much damages the skills did, add status icons cause by skill, we planned on adding a battle log also. The game could be great and still no one will love it if they don't understand it.

Crafting Lab GUI changed, some love it and could understand how to use it right away, some don't. We don't know how to react yet so have a look and tell us if you could understand it. Any help is appreciated! 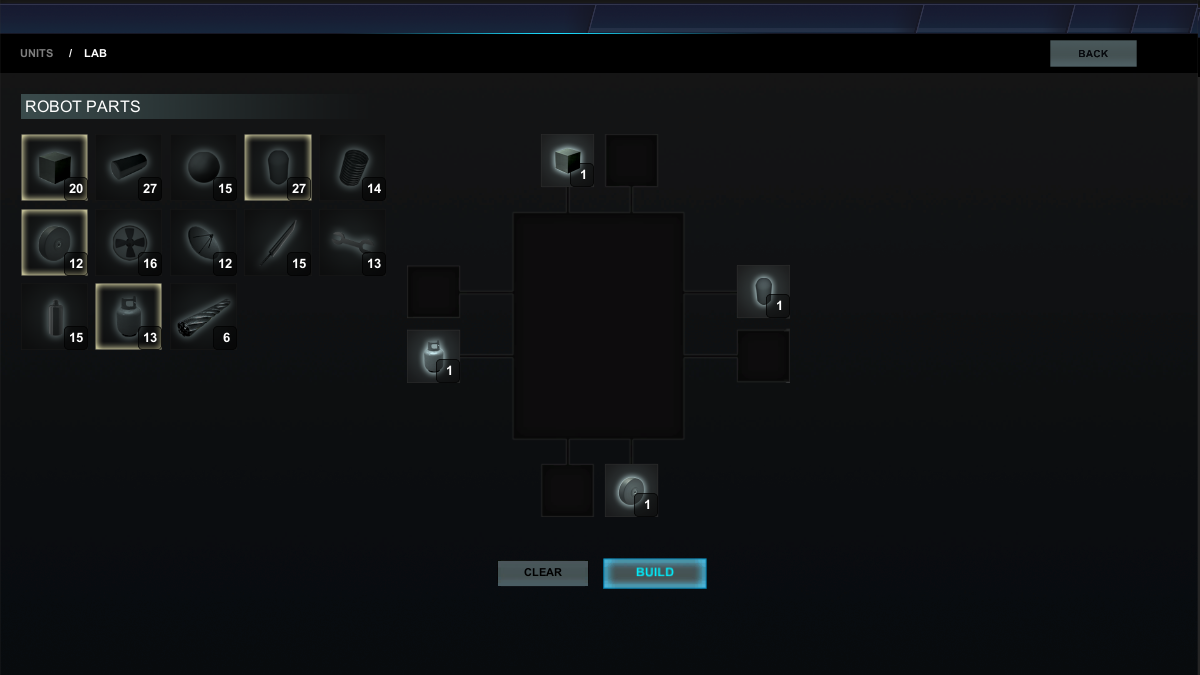 We reached the balance state, and made some huge change. First change is about units stats. Before they have strong stats from the beginning and only got slightly better after each level. Not they start weak and each level make them way stronger, it make you feel good when you level up an unit. We also make it's easier to level up, make the battle flow change constantly.

We also change the skills to make more position-shift skills like slide or knockback, to remove enemy from important positions and change the tide of the battle. We still feel like it's not enough though but planned to add more units to fill that role instead of making more changes.

The battle difficulty is also balanced, there will be an easy mode where it's hard to win and a normal mode where you actually have to think. We also make sure the game is harder as player progress in campaign.

The first tactic point also changed, it will appear at the middle line of the battle to make player less frustrating about it's random location, but the following tactic points will appear randomly anywhere to keep the unpredictable element.

We also change any unit that similar to other unit. If there are 2 ranged attacker with high damage, we will change 1 attacker to scout type, has high speed, movement but lower attack so there are more strategic choice in the units selection phase.

As stated before GUI improvement focuses on making sure players understand what going on.
We added objective to the game so players will never feel lost, also nothing special but it's necessary. 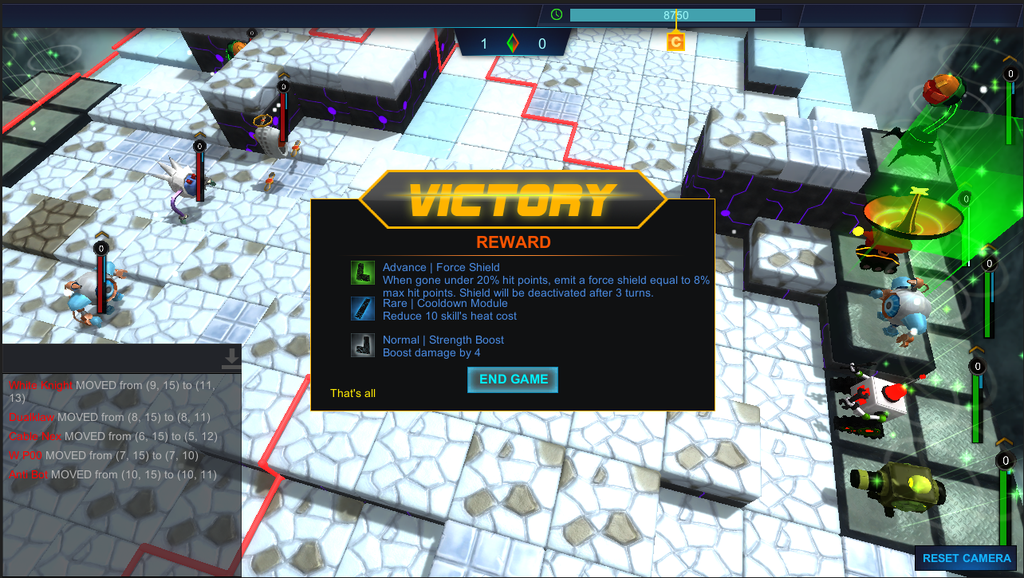 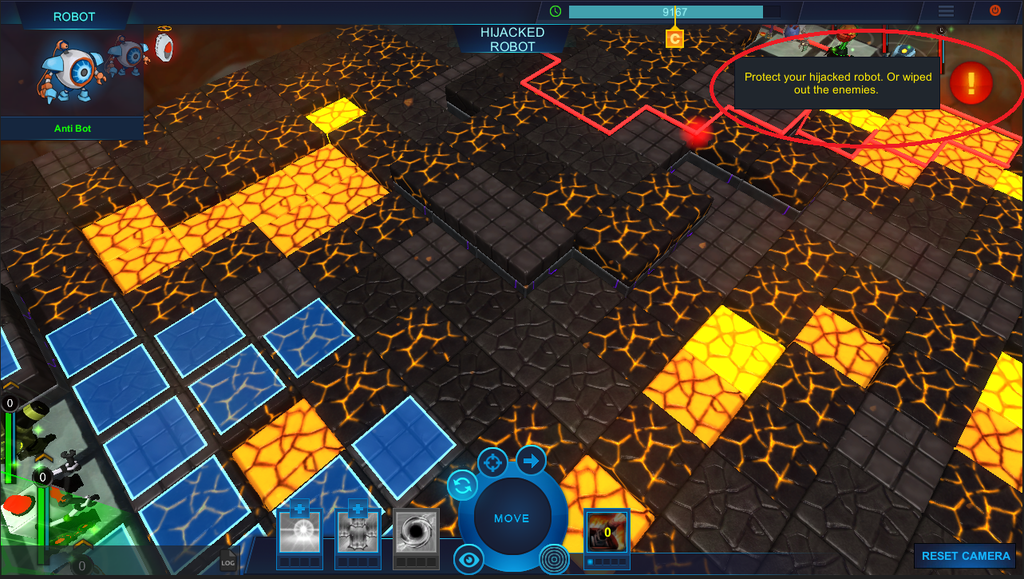 We also make sure players notice any change on the battle general's state.
Whenever players get new items, we will put an "!" mark on the units management menu so players know there are something new there. 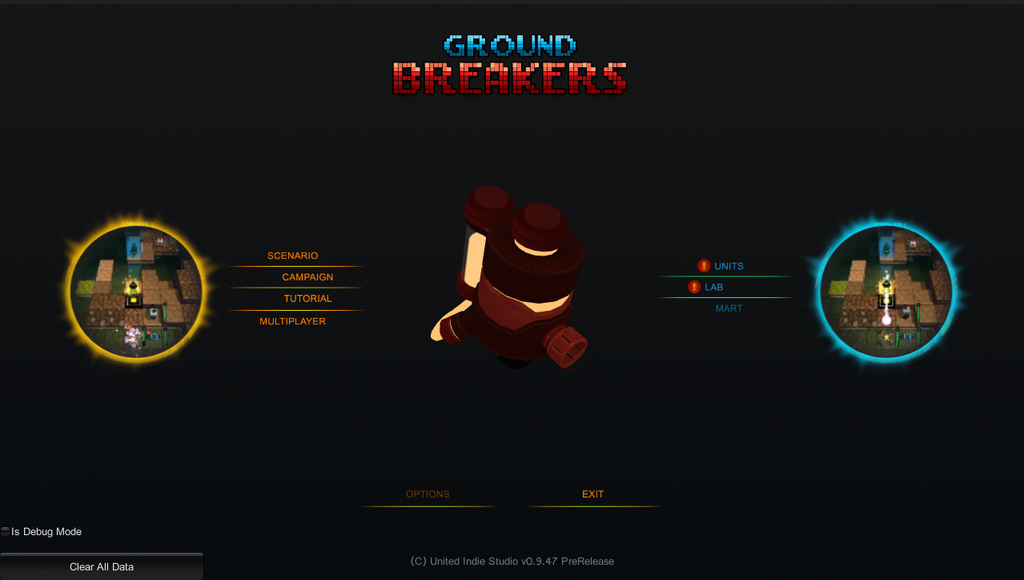 We did it all for you, players.

The battle grounds were random generated, and every shape has equal chance to appear. The problem with it is it'll make every battlegrounds as the same, if every items are unique, none of them are. So we define what kind of battle ground shapes are common and random more of that. One in a while a completely different shape will appear and make you feel wow, this look so weird and unique. Maybe.

Here are some brand new BGM:

The Defend skills were completely random before. But we changed it, make it slightly favors the user whom activated it more, just slightly to make an unpredictable situation.

*Defend skills are skill that not related to the units, have long cooldown time and usually affect the whole battleground, but has a chance to screw the user up if use it at the wrong time.

We made change to the world events, make sure player could always affect the event outcome. But we still lack events, and don't have enough resource to create more, hopefully our Early access won't tank

When we first decide to focus on multiplayer mode we thought we only have to send command between player. That was naive, we totally forgot about random factor. Like a skill from Wingenal that shoots 10 bullets and each bullet has random damage, each client will then auto random the damage, thats was bad. And there are like 20 skills like that so we have to create a batch of random number from server then send to both client at the start of the match, works like a charm, lesson learned.

There is another novice mistake worth mention here: we send command in sequential order, the only problem is they do not arrive at the same order and they send, so the match is out of sync, and what make it bad is it rarely happen on good networks. The fix is to send the order number along with them and wait for the command with the right order number to arrive to continue.

When we try a multiplay battle with Jonas from Germany, things are getting weird, there is an unit that move 10 times before other could move. Turn out his speed was 10 times of other unit. But that can't be true, the config side didn't say that, most units have speed = 1, that unit has speed = "1.2". Turn out the euro system culture treat 1.2 as 12 and load the config file accordingly. So we have to force using a global number format. Make sure you learn from our mistake and always check for culture format.

Here is the progress in number: