Going into detail about the Greenlight process, as well as some game options and a preview of the T-Shirts. Also includes a video of a full game being played (and won!) by the developer.

Not Your Space is on Kickstarter and Greenlight right now, and I'm sharing as much of the experience as I can.

First, lets take a look at the first 2 days on Greenlight. Here's the raw data: 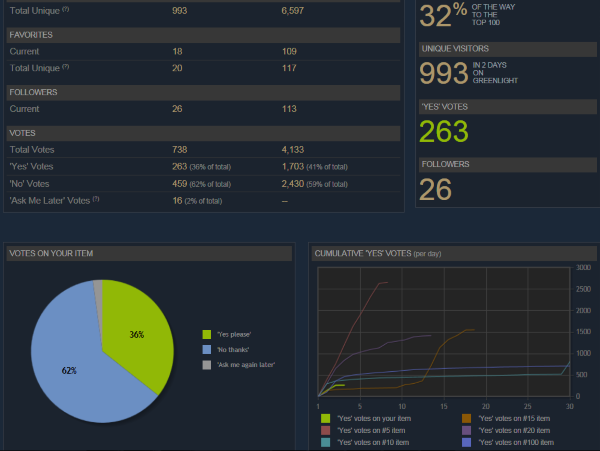 Now you might look at my 36% yes votes and say, "hey, that's terrible!". And as a creator, you might feel pretty bad about it too. But when you look at the information they give you, you can see that 36% is actually very good. The vast majority of really good games don't get 50% yes votes.

This is my third greenlight game, so I have some experience with the process, and some thick skin :) So think about it. Do you play every single genre of game? Probably not. There are millions of players on Steam, and they all like different things. There is also a lot of negativity on steam (just like everywhere), and some people set out to troll creators. And of course, there are more and more games that just don't belong on steam anyway, like those people who audition for talent shows, even though they know they are terrible.

So people have faith in Not Your Space, and they want to see it made. That's great. It will be. The issue now is driving traffic to the site for votes. Steam discourages trading game keys for greenlight votes, and personally I think that kind of behavior both devalues the good games and pollutes the market with games that otherwise wouldn't get through.

Now to talk more about the game itself, I'm going to explain some of the minor options.

In NYS, there are 4 classes of warship: destroyer (DD), cruiser (CA), battleship (BB), and dreadnought (DN). In general, they follow a linear power curve, where a dreadnought might be about 10 times more powerful (and costly) than a destroyer. But with "Giant Dreadnoughts", the ships take on a much steeper (exponential) progression, with a DN being around 50 times a DD, with a huge increase in build time as well. Totally changes the balance of forces. 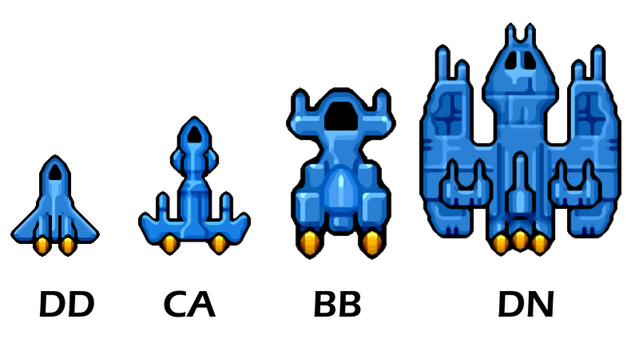 With this option selected, each race will have one class of ship that they are very good at building, and do so at reduced cost in wealth, population, and resources. For the Zatchi, an insectoid race that breeds very quickly, their favorite ship is the colonizer. This gives them a further advantage to claiming territory in the early game. Humanity favors the cruiser, and the Gorvalts are good at making battleships.

Not Your Space is actually based on a game I made in 2010, and I will cover that in a future update. This option takes away half of the ship types, leaving you with just the colonizer, destroyer, cruiser, and battleship. It also increases the planetary bombardment capabilities of all ships. This option is not compatible with certain others, like favorite ships and resource mining, and it will override them.

(This one is an indieDB exclusive, not mentioned anywhere else yet!)

Strategic resources is inspired directly by "Endless Space, an awesome space 4X game. This option causes resources to be distributed randomly on planets around the map. Each resource provides a bonus to a certain area, like reproduction, hull strength, repair rate, etc. The more of each resource a player owns, the greater the effect (exponential). This adds a new strategic element, since players might try to collect all of the planets with a certain resource, to maximize their bonus.

I released a photo today of one possible design for the Not Your Space T-Shirt, and also announced a new kickstarter backer tier, designed to entice people to actually *get* the shirts. 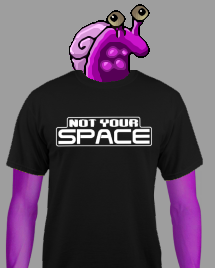 I will leave you with a slightly-sped-up video of a full basic game, in which I almost give up, but then win in the end. I play the Zatchi (green) against the Humans (blue).