KarBOOM is coming out October 29th, regardless of whether or not it's Greenlit by then. But hey, wouldn't it be cool to get a Steam code day 1 rather than a long time after the game comes out?

Why's KarBOOM coming out on October 29?

October 29 will be KarBOOM's third anniversary of public playability - KarBOOM 0.1 was released to the public on the Gamestudio forums on October 29, 2010. Having a look at that version, it's quite different, actually: its only mutators are sapoi and tag (which haven't made the Unity version, due largely to their unpopularity), and it has an instant replay mode that I'd love to re-implement, but can't promise in time for the final release as I have higher priorities at the moment (maybe in a post-release update?). 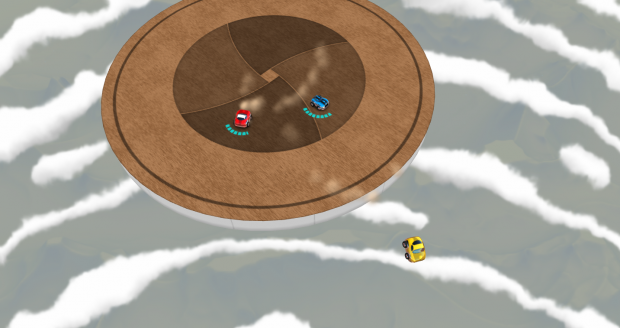 Greenlight is the only way to get a game on Steam at the moment, so naturally, KarBOOM is now on it. I'd love to have KarBOOM on Steam, but that's very much up to Valve seeing the game and deciding it's worth putting on Steam. And that, my friends, is where you come in. Everyone who clicks "Yes, I'd buy this game if it were available on Steam" (which is not a commitment, just an expression of interest that helps Valve gauge the popularity of a game) helps get KarBOOM on Steam.

What if KarBOOM's not available on Steam when it's out on Desura?

Don't let that stop you from buying KarBOOM on Desura or via other distributors. If and when KarBOOM is available on Steam, I'll make Steam keys available to everyone who has bought KarBOOM through Desura, KarBOOM's website, or any other distributor authorised to sell KarBOOM.

And what's new with the latest demo?

Check out the readme for full details, but the latest demo update adds boost-meters to each kar so players can tell when their boost is still recharging, as well as a bunch of tweaks and fixes:

The latest demo is always available to play in your browser at KarBOOM.net for those with the Unity webplayer. The downloadable demos are always available as soon as they're approved on Desura and IndieDB - look out for "Demo 6" for Windows, Mac & Linux on the downloads page.

Keep up with the latest KarBOOM news by tracking the game here, following me on Twitter @JibbSmart, and if you show support on Greenlight you'll get the latest announcements there when you login to Steam.