We're applying to be a mentor organization for the Google Summer of Code. Also, look at some cool projects using SuperTuxKart in unique ways. Finally, only one day left to vote for us!

We've entered the final day of voting for the project of the month. It's been a back and forth between us and some anonymously evil accounting software (just kidding). But please help us win by voting here.


Progress in the mod and open source community
In the world of open source game development and the mod scene (think Black Mesa Source), progress is often measured in years, as coders and artists are volunteers who need to balance jobs, family/friend commitments, and other hobbies besides game development. One major boost to FOSS (Free and Open-Source Software) development comes from Google and its Summer of Code (GSOC) initiative. This year we want to be a mentoring organization.

Google Summer of Code
In a nutshell the GSOC works by providing college or university students with money for working on open source projects for several months. In the 8 years of GSOC, over 6,000 students have successfully completed their projects. If you're using open source software (Android, VLC Player, Libre Office/Open Office, etc) then that project has probably received at least one GSOC student. Even if you're not interested in working on STK, if you're a college age computer science student you should see what projects become available. You get to practice coding, add something nice to your CV or resume, and get some money. The project improves and Google maybe does a tax write-off and everyone is happy. Here's the 2013 website. Google-melange.com

For student programmers age 13-17, Google also has a separate program called the "Google Code-in" for you. Developers.google.com

What does STK need?
The two top project ideas we are cooking up are better AI and networking support. The artificial intelligence in the game is alright, but it doesn't work for multiplayer battle games. The reason is the objective is different between a race where we use a predefined drive line that the AI follows, and an arena battle the level is open with no clear objective of where to go next.

Concerning networking; we'd like to see a leaderboard for highscores, a game lobby where people can see friends, and a rating system for the add-ons. We think this is a realistic goal rather than full multiplayer support, but we'll see what kind of students we get.

Our next step is to go through the application process and figure out how we would screen applicants if Google selects as a mentoring project. Some projects require applicant students to make at least one acceptable code commit to the project, thus proving that they are familiarizing themselves with the code base and are competent programmers.

So we're open source and wanting to Google to finance a student(s) to work on the project. Well, besides being a free game you can play, STK is something we encourage you to hack and modify. Here are some of the more interesting projects that come from outside the core STK development team who have used STK.

Illumiroom
Previous posts have talked about the Illumiroom, the projector/tv synchronization technology. Microsoft demonstrated the technology using Halo, Red Eclipse and SuperTuxKart. Neither the Red Eclipse team nor the STK knew that Microsoft was using our software to test new technology. Companies using our project's don't need to tell us beforehand and that is just fine with us.

Exercise Bike
Don't worry, it's not just monolithic corporations doing cool stuff with FOSS. There is also the maker crowd/tank top aficionados as well. Here is a video by a student where he combined an exercise bike from the 1980's and an Arduino board to make a controller for STK. The first couple minutes he's explaining the setup and the camera work is a little dizzying.


It's a cool project, but I think it was left unfinished. Personally, I find exercise bikes extremely boring, wouldn't a multiplayer game like twisted metal make exercising much more fun? Could virtual bike polo + Cartoony Violence = fitness for me?

Phone Controller
A fan of the project just uploaded this video yesterday in response to our wiimote video. He's made a program to turn Android phones into game controllers for your computer. No one carries around a controller with them (maybe a select few), but everyone has their phone. This could be very handy. He's only tested it only a couple devices and there are some bugs, but it's very cool and he plans on open sourcing it. The program should actually work with any game, but he wanted to demonstrate it with STK.


STK + OSM
A final example of people doing cool experiments with STK is some members of our forums (who are also involved in Open Street Maps project) used OSM data to quickly build levels for STK! Ever wanted to see a chimpanzee drive a kart around your neighborhood while shooting explosives cupcakes at puffer fish? Well... with a little hacking, you can manage, without having to buy expensive LSD or Mushrooms! 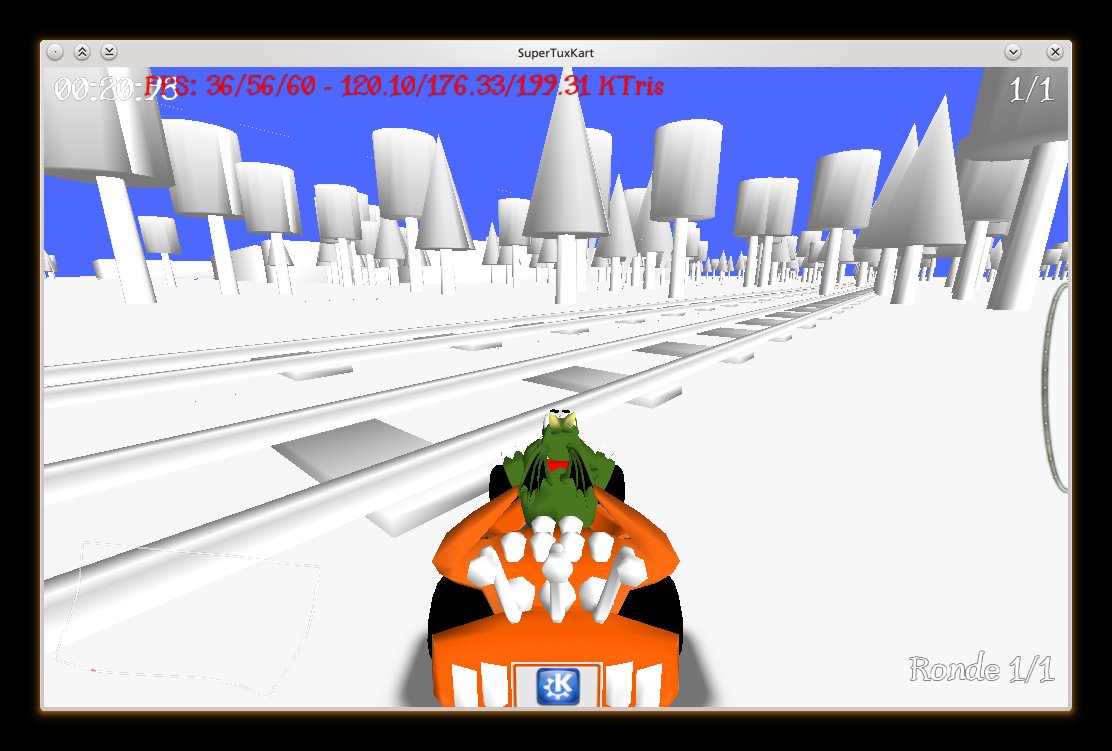 People do creative things with commercial/proprietary software as well of course, but FOSS allows the user to see every sinew and bone of the program and how it works and then innovative people can adapt it to their needs. Hiker's, one of our two main developers, goal for STK is 1) make a fun game and 2) make the source available for students to study and experiment with it.