We've made some dramatic changes to some of our core game mechanics based on your feedback.

The past 3 months have flown by and we’ve been busy showing off our game at various places like the Playcrafting Expos and, most recently, MAGfest. We even spoke to some college kids at The Wharton School of Business at the Univeristy of Pennsylvania at a Games Industry Panel. All that to say we’ve been super busy and we’re using these events as excuses as to why we haven’t been updating our developer log.

That doesn’t mean we haven’t been hard at work. We received a lot of valuable feedback not only from the gamers but from the judges at MAGFest as well. While it’s always hard to hear the negatives of a game, it really helps us figure out ways we can improve it. It’s also great for bug testing and we found a few new bugs that we’ve been able to quash.

One of the biggest comments we’ve received from judges is the fact that the game doesn’t fully utilize the mechanic of painting. Right now you just match the color to the paint blob to defeat them. Most people wanted to utilize it more so we’ve come up with a couple more mechanics to introduce some more depth to the colors. For example, we’ll have platforms that move across a track and in order to stay on the right track you must hit a switch with the right color otherwise you fall off. We’ve got some other ideas brewing too, but these might be something we add on for later updates. 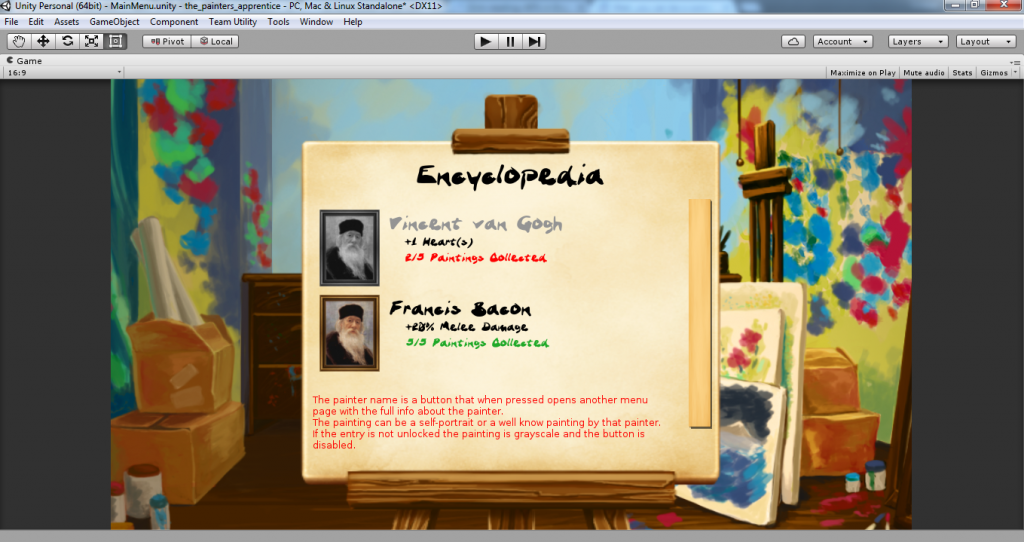 The biggest change we’ve made is the move away from a store. Rather than purchase upgrades you now collect paintings to unlock your perks. This means there’s more replay values to levels and lets us go even crazier with our level design. Hidden areas anyone?

So what about those paint tubes you collect then? These will basically tie to your paint meter. The more you collect the higher the meter so you can then pull off paintball attacks and the powerful rainbow attack.

Of course we’ve also gotten rid of some other aspects of the gameplay. There is no longer a dash attack or dive attack. There was just no easy way to bind these to keys and they weren’t really necessary to the gameplay. We’ve also adjusted some of the enemies to ensure players can actually defeat them with the melee attack. The jump sound effect will also change as a lot of people had issues with it. Maybe we’ll stick with a more subtle sound than what we currently have.

Besides that, we’re plugging along. We’ll be looking for some alpha testers probably by the beginning of April. The demo will just be the first two worlds and we’ll want to know your thoughts on the levels, bosses and if you found any bugs. Speaking of bugs, we’ll be writing up an article on proper bug testing procedure soon so stay tuned!