We moved to Discord, come chat and hang out with us!

Have you heard of Discord? It's a new chat service. We've been trying it out for a month or two now -- no secret to those who frequented our IRC channel. Turns out everyone likes it, so we're sticking with it. We want you to join and hang out with us. 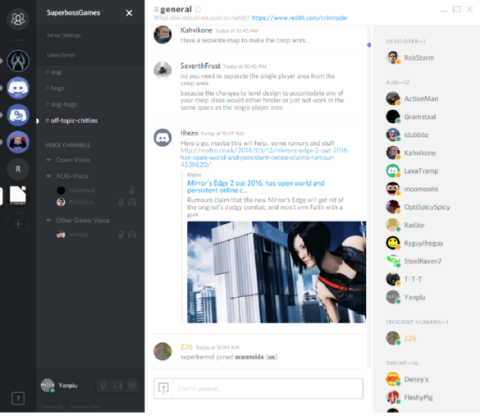 Plus, our old IRC bot has joined us. He's not fully functional yet but his most useful feature works. He announces new games starting. I'll talk about Z26 in detail some other time, after he's more complete.

Speaking of IRC, our channel (#superbossgames on Freenode) is generally inactive these days. It's still somewhat populated, but it's an echo chamber because the regulars have migrated to Discord.

You're convinced? You want to join us in Discord?

Click here for the invite link! We're pretty casual so don't be scared to join the conversation. The main rule? Be respectful. To say it another way: "just don't be a boop".
See you.