Goat Simulator is like an old school skating game, except instead of being a skater, you're a goat, and instead of doing tricks, you wreck stuff. It brings next-gen goat simulation to YOU. WASD to write history.

Goat Simulator is like an old school skating game, except instead of being a skater, you're a goat, and instead of doing tricks, you wreck stuff. It brings next-gen goat simulation to YOU. WASD to write history.

GS is a small, broken and stupid game. I t was made in a couple of weeks so don’t expect a game in the size and scope of GTA with goats. In fact, you’re better off not expecting anything at all actually. To be completely honest, it would be best if you’d spend your $10 on a hula hoop, a pile of bricks, or maybe a real-life goat.

Q: When is the release date?

Q: Will there be multiplayer?

A: Sadly there will be no multiplayer, we are using NVIDIA PhysX and Apex for our in-game physics, which gives us amazing and realistic physics, but it would synchronise terribly in multiplayer. With multiplayer, we'd have to remove 90% of the physics, all destructible objects and a lot of our favorite features.

A: We don’t have any plans for Mac/Linux support at this time, but if it’s requested a lot, we might add it after release.

Q: I have an idea! Add open world and police and animal control and spaceships…

A: Goat simulator was made as a small game jam game and that’s how we want to keep it. We will polish the game up (but keep the funny bugs of course!), but we want to keep the core gameplay small and silly. Hopefully the game can make you laugh for an hour or something. We are, however, working on Steam Workshop support so people can edit in their own levels in the game! 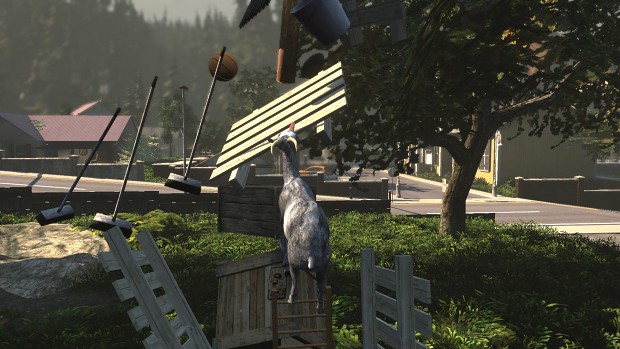 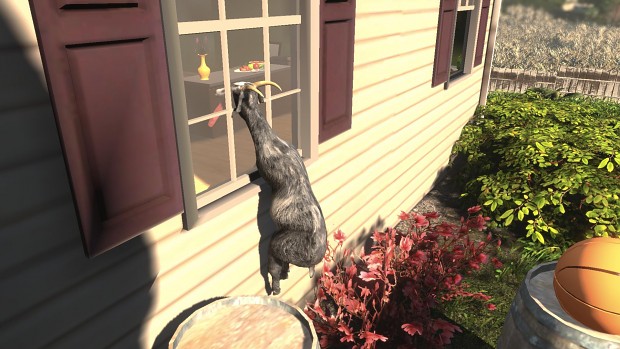 Want to experience the goat wonder before anyone else? Pre-order now at the official site of Goat Simulator and get access to the game three days before release.

Goat Simulator is currently being developed by Coffee Stain Studios, the makers of Sanctum and Sanctum 2.

I thought i'd see it all, but this takes the biscuit lol.

Too sad this will not have multiplayer... But even if it had, I´m not sure if our computers would be able to process the insanity :P

Finally someone who doesn't see ALL bugs as evil monsters, but rather entertaining little smidgens you occassionally come across

This is going to be glorious.

Oh wow. I actually want this game after watching that... It looks hilarious.

cinco, you're a scumbag.

Is your avatar having sex?

My first thought was: "why did I click on this?"

My second thought was: "how much?"

Is it ba-a-a-a-a-ddd that I really want to play this game?

So much hype, can't wait for this game to hit the digital shelves!