Kopanito Soccer got some cool features in the new 0.6 version: goal replays, which can be converted to animated GIFs in-game and a new freeze super-move.

Posted by TomaszGrajewski on Apr 1st, 2016

Kopanito's team is back with some cool new features in v0.6 and new yet-unseen bugs (regressions)! We've worked hard past 2 months modifying most of our rendering code towards promised online multi-player. There were a lot of necessary changes in the game's code, so it's very likely that many things got broken in the process. But we think that anyway the game is reasonably stable and all regressions will be fixed in future. Now about the new features.

This is the fifth super-move in the game. It allows you to freeze players in radius (except goalkeepers) around the current controlled player. The longer you hold the super-move button (E key or LT button), the bigger is the radius of freezing. Note that you may also freeze your teammates too. Frozen players wont participate in the game for some time (depending how close they were to the freezing player).

This super-move can be used both offensively and defensively. You can freeze opponent's defenders to make it easier to score a goal for example. The ball can also be frozen or, actually stopped, even in mid-air. It's a good method to cancel opponent's shots, including super-shot. Try it for yourself :)

You can also slide tackle a frozen player to defrost him faster. 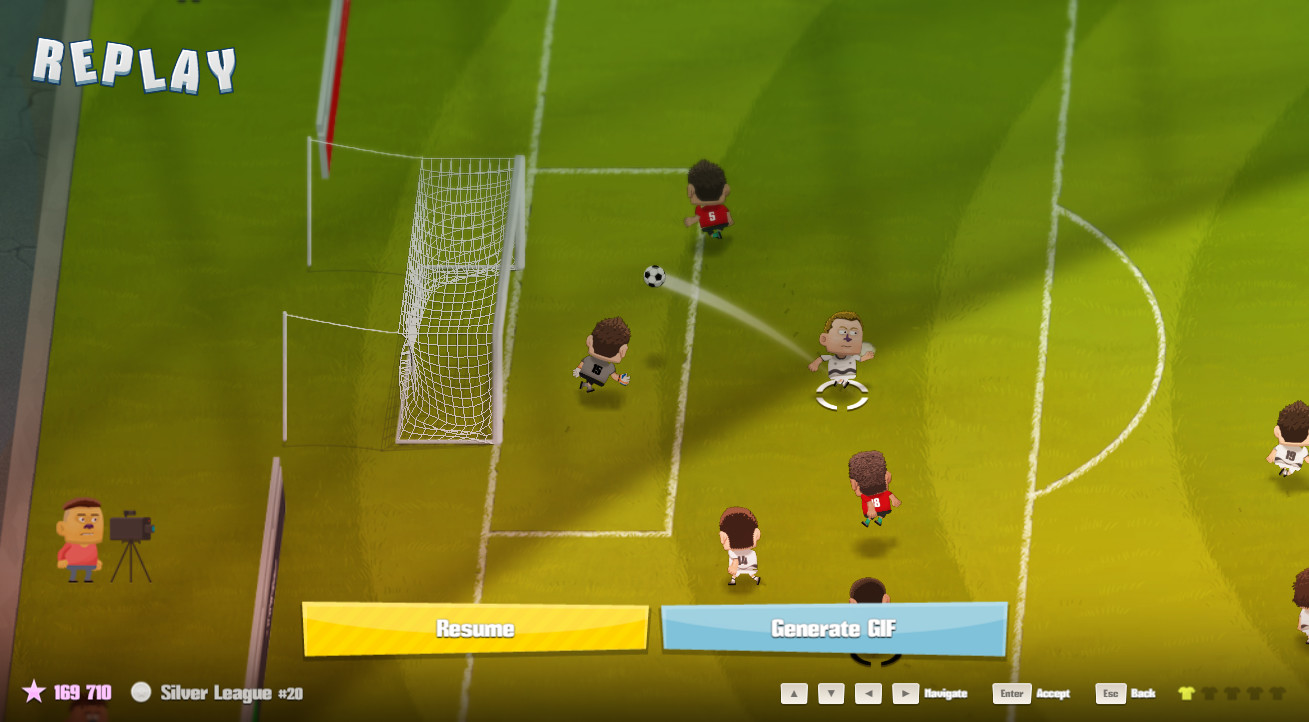 They activate automatically after goals, but can be started manually from the pause menu. It's a side-product of online multi-player, where game state recording is needed. Since we're recording a match, we though it would be great to able to replay it. Up to last 8 seconds are recorded and can be replayed back. Note that replays aren't exact, pixel-perfect recreation of a given situation, but rather a very close approximation. This means that sometimes things may be broken during a replay (we'll fix this in future). 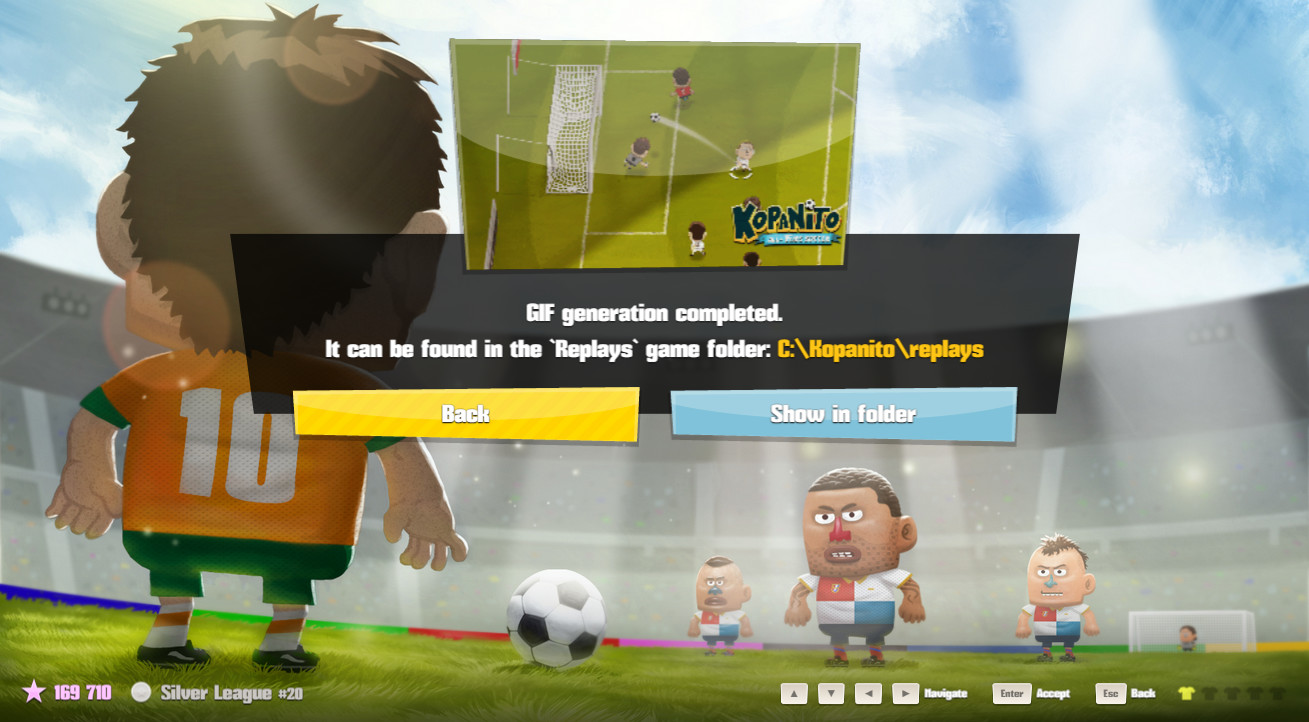 This feature allows you to create a GIF animation from an action replay. This was inspired by the first GIF animation uploaded by FUDO. We think it will be great feature to share all cool and funny stuff you do during a match.

Note: This feature is very experimental. It's good, but not perfect. GIF generation takes up to a few minutes to complete, so please stay patient. Generated animations are currently heavy (5-8 MB) and not so smooth. This will be improved in future assuming players' interest.

We encourage you to share your GIFs on the Artworks section of the Community Hub or anywhere else you like around the web.

This fourth difficulty level was previously hidden. We've decided to show it, but leave locked. Unlock condition is visible when starting a new cup or league. 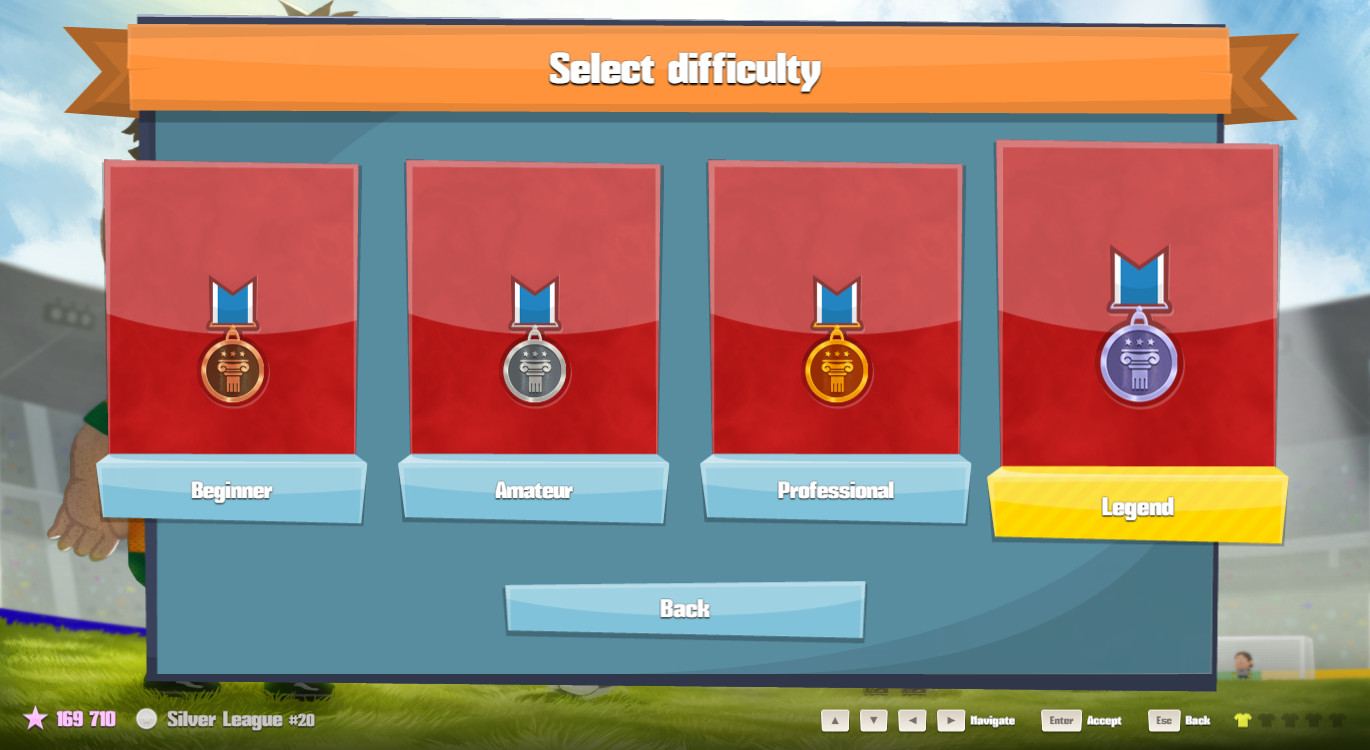 This is not an April Fools' Day joke, in case you are wondering :) Thank you and have fun!