PAX East 2019 marks my third major showcase of Summoners Fate and I continue to learn from our experiences. Here’s three things we did different to stand out as an indie at PAX East this year and the data we collected. 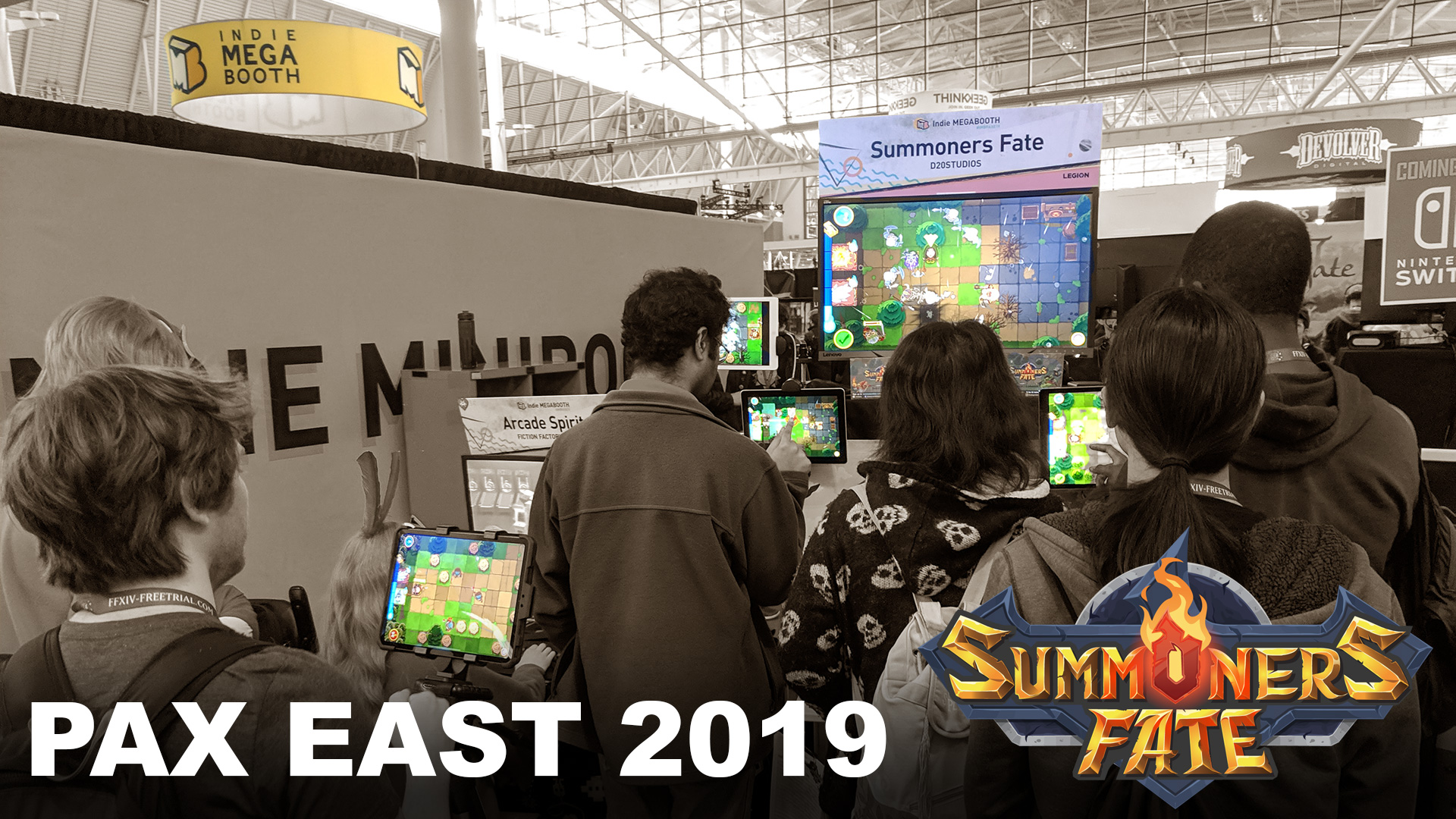 The camaraderie and brotherhood shared among fellow indie devs at events like PAX East never ceases to lift my spirit. Indie game development is the gem of the games industry where your market competitors passionately root for each others success. It’s a badge of honor to share our experiences with each other, openly and honestly, to solve our paramount problem of discoverability: what works and what doesn’t work to capture an audience? Who do we need to be speaking with to secure funding or publishing support? What crazy new ideas haven’t we tried yet?

PAX East 2019 marks my third major event showcase of Summoners Fate, and my second time showcasing as part of the Indie MEGABOOTH. I continue to learn from others with each experience and pay it forward by sharing here. So, here’s three things we did different to stand out as an indie at PAX East this year and the data we have so far on how it compared to our previous showcases:

A key take-away I learned from showcasing last year at PAX West with the MINIBOOTH is that a single screen demo heavily bottlenecks potential plays. Space at the MINIBOOTH is limited to a single monitor kiosk, but exhibitors are allowed to embellish it with decor provided it respects the space of your fellow miniboothers. So, I expanded on the existing idea of lateral signage by substituting mounts that could support tablets and phones. Each of the devices connects to a 15 foot braided charge cord which allowed us to extend our reach into crowds that would gather to play and simultaneously keep everyone engaged and entertained. 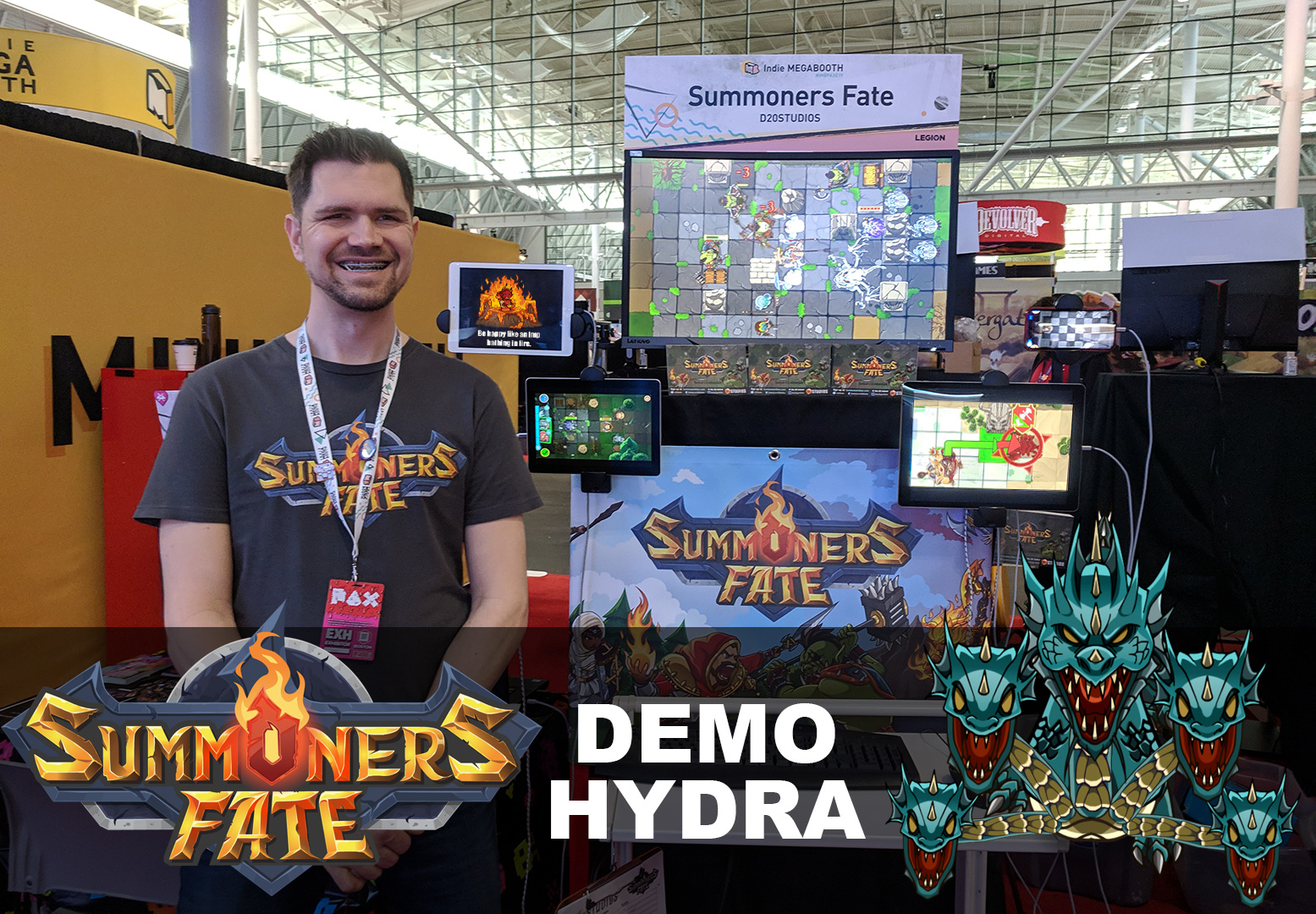 The Summoners Fate “Demo Hydra”. Cut off one head, two grow in its place!

I lovingly named this concept the “Demo Hydra” for its likeness to the mythological beast of many serpent heads. In total, we had 8 screens with us including our personal phones which we handed out as needed to keep the hydra fed. It should be considered a scientific fact that “success breeds success” and likewise “a crowd brings a crowd”. Whereas folks previously breezed past the MINIBOOTH, our perpetual crowd pulled them in, curious to discover what all the fuss was about. By virtue, this had the collective effect of drawing more audience for our fellow indie MINIBOOTH showcasers as well, allowing us all to share in the success. 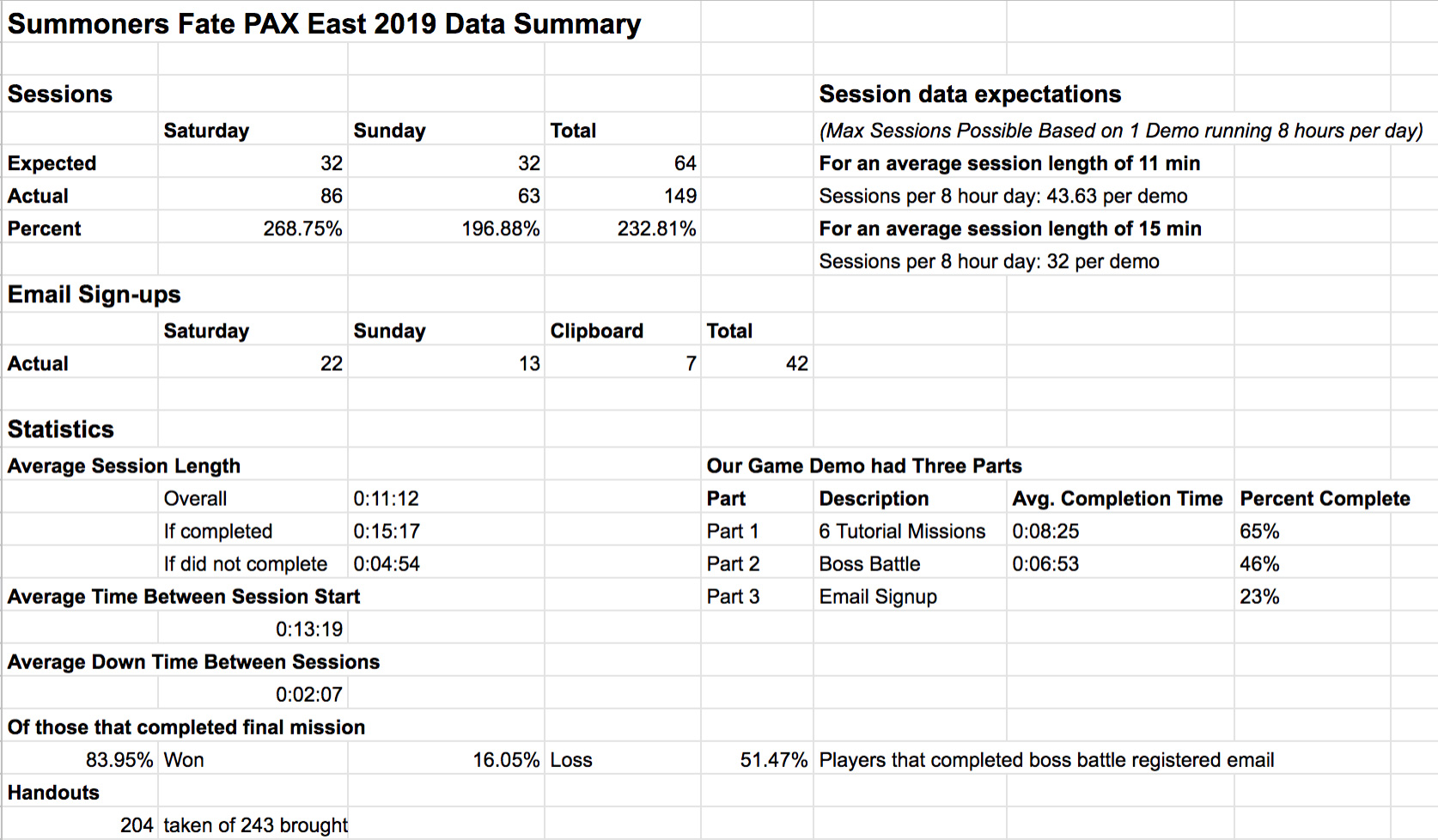 Our demo tracks telemetry so that we can learn and improve from our experiences.

All in total, we had 149 sessions and 42 total email registrations for a total budget under $2660(including booth, hotel, travel, food and marketing materials). By comparison, our PAX West showcasehad 76 sessions, 37 email sign-ups, so the hydra had the effect of doubling our total sessions. Our conversions are more similar to our Dreamhack showcase. There we had 142 sessions and 49 sign-ups, but with a 10x10 foot booth over 3 days instead of 2. My theory is that a more crowded booth creates a less intimate experience where folks are less inclined to register their email. However, I prefer to let the game speak for itself. Time spent with us is an investment that raises brand awareness and breeds familiarity and likeness with our game. In aggregate of all three showcases, I believe our data may also suggest our demo is about 2 levels too long and that we could increase completion and conversion by shortening the experience and adjusting the difficulty on the earlier levels.

Not unlike the vast ocean of games released daily on Steam, the waters of PAX are overloaded with games all competing to get prospective player attention. Showcasing with the Indie MEGABOOTH supports the first step of marketing by putting us in a school of fish strong enough to have a presence from afar and allowing folks to find us. The second step is creating a memorable impression that stands out and will last with players following the conference. Our previous showcases taught us that players respond well to a mix of familiarity and weird, and our signature hook became “Would you like to throw a squirrel at some orcs?”

We don’t want to be typecast as a game just about squirrels, though, so we expanded our marketing with a broader theme of “WE LIKE WEIRD.” and showing how our game connects emotionally to the characters and cool things you can do in the game. Varieties of these messages were looped constantly on a dedicated screen in the hydra. Here’s some examples:

My teammate, Peter, took the concept a step further by devising a way to make an immediate personal connection to passerbys. Honestly, I was hesitant when he first shared his plan… “Hmm, that might be perceived as offensive, no?” but the real shocker was that it was actually extremely effective. Peter casually approached folks walking past the booth and said “Hey, you look weird.” ...pause… “We like weird.” … smile… Players considered it an honor to be recognized for their weirdness, and why not, right? What is PAX if not a celebration of the weirdness in all of us? Bonus tip: Bring a new teammate with you to showcase. Their perspective may lead to the discovery of the most effective way to connect with your audience.

A key benefit of showcasing with Indie MEGABOOTH is their Mixer event where you get to party and network with key industry folks including reps from Sony, Microsoft, Kongregate and more. One of the most interesting folks I had the pleasure of meeting that night was Alex Engel, a product manager with vast experience releasing AAA games in the industry. Word of advice: If you ever have the opportunity to strike up a conversation with a PM, listen carefully and absorb everything. They are among the most brilliant minds in the industry.

I asked Alex about how to make a wave connecting with our audience and a key piece of advice he shared was to use the convention as an opportunity to give our players a voice: let them communicate what excited them about the experience. That is what will excite new players, and that is what you should focus on. Real simple: Ask them what they enjoyed, then, create a compilation of their responses. So, the next day we did just that:

If you’re using Google Photos, you can create a clip like this in about an hour using your phone. Select the all the clips, then use the auto-assist to make a movie. Then, adjust the clips so they reflect the most interesting parts of the interviews. To improve this in the future, I would bring personal mics to help filter out the background noise of the convention and have the voices be more clear. Even with just basic phone audio capture, though, I think this is a powerful takeaway of our experience.

What unites us all as indies?

Regardless of the tips, tricks and luck we all hope for, one sentiment was constant throughout all the fellow indies I spoke to: we “go all in” giving every ounce of strength and energy we have. Failure never deters us. We never consider the consequence of “What if this game doesn’t succeed?” because we perceive every opportunity we have as a gift from which we can learn and grow. Perseverance is the standout character trait of those who ultimately succeed because every moment of life is lived passionately to its full potential. 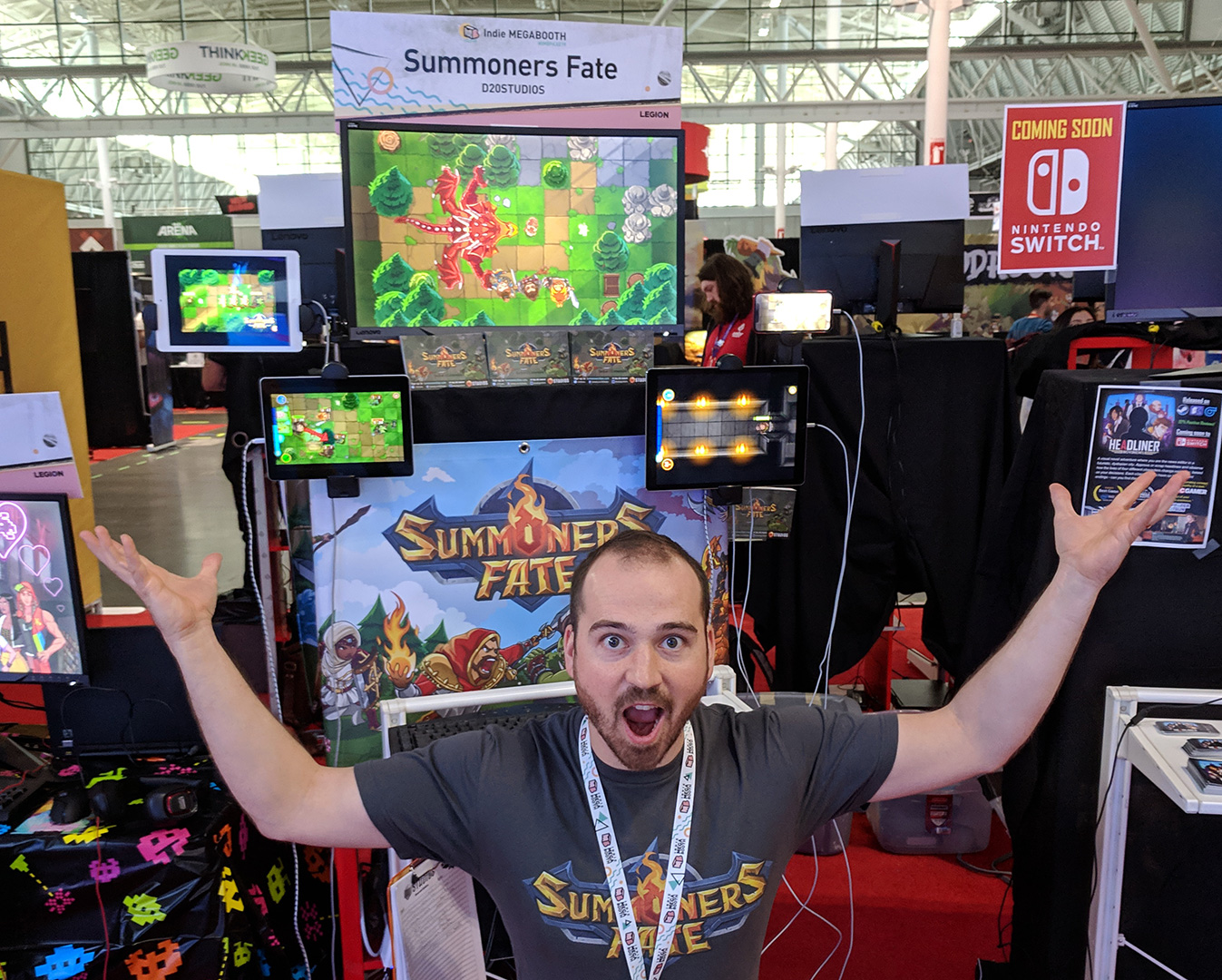