A small sample of the types of Champion enemies you will face in Syndemic. 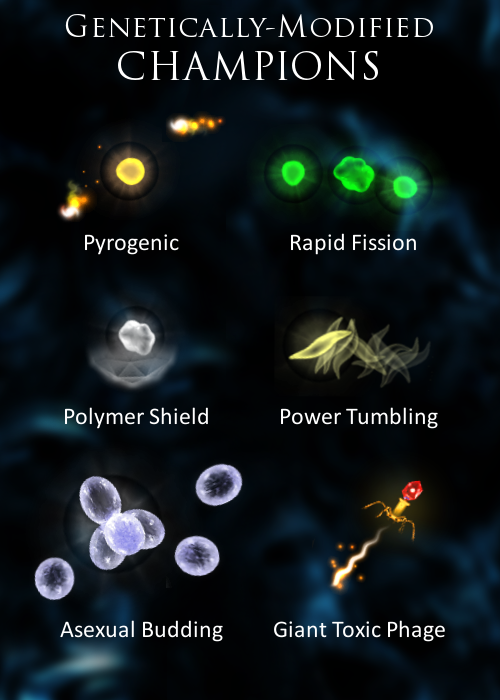 These enemies are upgraded versions of their normal kin. They have improved abilities and demonstrate extremely aggressive behaviour towards the player. More importantly, they have a randomized biological trait that requires a change in strategy to defeat. Like most things in Syndemic, they are inspired by real-life biology but should not be considered an accurate depiction of what happens in the body!

Here are some examples of the traits:

Pyrogenic: these Champions have 2 fiery proteins that orbit their cell at all times. The fiery proteins do massive burning damage, but they can be dodged and out-manoeuvred if you watch carefully.

Polymer Shield: these Champions have a powerful synthetic shield that blocks all antiseptic weapons from penetrating. However, it does not completely cover the bacteria, leaving an opening for attacks.

Rapid Fission: suffering from an unstable genome, these Champions constantly divide, creating smaller clones of themselves. However, while the clones are much weaker than the original, they will overwhelm you if not destroyed quickly.

Power Tumbling: in real-life, bacteria reorient themselves by tumbling and facing towards a chemical source. In Syndemic, Champions with this trait are able to rapidly dodge your attacks and aggressively charge you.

Asexual Budding: some fungi are able to create small 'daughter' clones from a larger 'mother' cluster. However, these Champions use this cloning as an offensive weapon, using the daughter clones as projectiles against you.

Giant Toxic Phage: these Bacteriophages have been engineered to be oversized and full of anti-microbial toxins. They will orbit and track your movement while bombarding you with damaging projectiles.