Greetings awesome readers! It's again time to post a monthly update about the project.

Greetings awesome readers! It's again time to post a monthly update about the project.

June has been a busy month for me due to backpacking in Japan but there was still time for some rather big additions.

After the long wait I finally got my hands on the Oculus Rift devkit a couple of weeks ago. This allowed me to see just how horribly wrong my eye position calculations were in the previous screenshots and videos. The stationary GUI also didn't perform like I was expecting.

The Oculus Rift-mode was changed somewhat with correctly positioned eyes, head tracking and by making the GUI float in front of the player. In the current test-mode the GUI is linked to character's rotation but not to the head so it's possible to look around the GUI by turning head around.

I'll probably later on record a video showing the actual devkit device and what will be required to use it with Gekkeiju.

View distance has always been rather short in Gekkeiju. This has mostly been because of my inability to get things run fast enough. Now the rendering distance has been increased somewhat by loading low poly versions of terrains in the horizon - while this does cause a minor slowdown, it's not too bad. There'll be a possibility to turn this longer rendering distance off for slower computers. 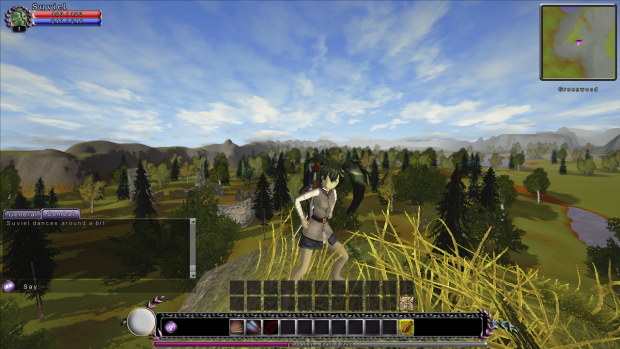 Another major feature was the addition of graphics to skill queues. The skill queue-system is something that allows queueing the next skill while another one is still executing.

The currently executing skill will show up with green border while the next skill shows up with white. This makes planning the combat maneuvers slightly easier. 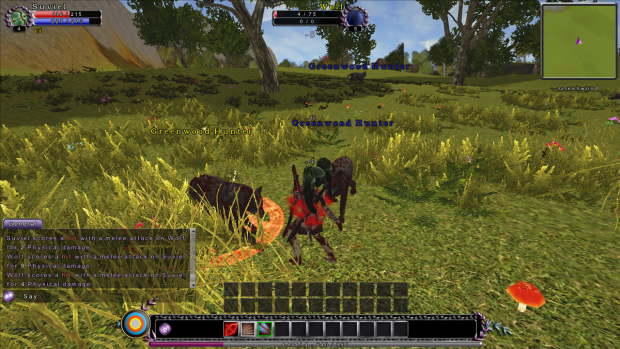 Most skills and normal combat will now require that the player is facing the target. This is a totally new feature to Gekkeiju since in the past skills have always worked no matter the facing direction.

Addition of this angle detection may also eventually allow skills like "backstab" to be implemented to some class.

The game is currently preparing for the next public test day. This means something like an alpha-version to gather information on how well the game works on different systems, and to see how well the start quests and tutorials etc work for different players.

The public test day is planned to happen on 20th of July but this may change since there's a possible server move happening at some point during July. The sign up for the test is currently available only in our Facebook-page since it's not possible to yet handle big volumes of testers from other sources (the accounts are still made manually etc). There's some hope that it'd be possible to launch a bigger closed alpha/beta at the end of the year though.

The normal development of the game continues after the test day. Next features will include even more work on the Oculus-mode's GUI and then world building towards the next big town.