The reasons behind the addition of the new Garrison Access machine, what it's capable of, and other related mechanics. Also, a new machine info window!

Nearly two years ago, five machines were added to the game, forming the core interactive environmental feature in the world of Cogmind. Since then we've seen the addition of a few more environment-based elements in the form of non-interactive machines and traps, but no more hackable installations.

Locating exits to other floors (and reaching them) is your ultimate goal in Cogmind. While there are plenty of other optional activities, everything you do ultimately revolves around escaping. Without XP to grind, engaging hostiles is rarely necessary and you can theoretically sneak your way around everything except when you feel confrontations are necessary to better prepare for unexpected encounters by harvesting new parts. Thus in terms of design, these exits ("access points") cannot be made too easy to find, as their frequency and locations essentially control the overall difficulty of the game.

There are many ways to discover where exits are, from the traditional-but-dangerous "wander around until you find one," to mechanics-oriented hacking-assisted searches, to meta-solutions including learning the types of surroundings in which an exit might be found and looking for those, or learning the general layouts of each type of floor.

More recently players have figured out an inexpensive and foolproof method for navigating to exits on large floors. Notice that other robots use the same access points that Cogmind does when they enter or exit a map (yes, they do this!). So all you need to do is know when a particular robot has entered the map, and retrace its steps (or at least head in the direction it came from) to find the access point they used!

Programmers happen to be the perfect candidate for this tactic, since they are dispatched directly to your position and that dispatch is accompanied by a global announcement/alert, meaning you know when they're coming and that it's from a location you can use to escape.

While preparing the design doc I was aware of this possibility, but there wasn't enough time to implement the intended solution before releasing Alpha 1, so I decided to wait to see how long it took players to discover this and start abusing it... My hand has been forced, and with Alpha 4 we welcomed a new type of access point meant purely for use by hostiles =p

A Garrison Access is white (lighter gray), appears denser than most other machines (these things are armored!), and are of course represented by the letter 'G'.

So why a "machine"? Aren't access points normally just your average '>' stairs? While that would be easy--saving weeks of work, in fact--it would also be kinda boring compared to the potential for depth and related features here. Making them a machine also means they're conveniently compatible with the familiar intel system. You can hack garrison locations from any terminal and they'll be marked on your map. (Also, there is a '>', but we'll get to that later :D)

As implied earlier, dispatched combat squads may now instead come from a garrison instead of a regular access point, especially if located closer to the target area. So for those of you being bad robots (all of you!), you'll notice enemy response times have gone down. Also, unlike normal access points where the game has been nice about not allowing hostiles to enter through them when you're nearby, hostiles can emerge from a garrison even if you're sitting right next to it! No loitering, please. But wait, there's more...

Combat robots being attacked in the vicinity of a garrison may call for backup. Knowing this you probably don't want to engage targets stationed at or passing by one these places. Unless of course... you're carrying a Signal Jammer ;).

Even unarmed non-hostile robots might report you and call a nearby garrison for rescue if you shoot them (and they survive =p) while close enough. If you can leave the area quickly enough that won't be a problem, though, since the garrison squad will only head to and monitor the area around the reported disturbance.

Of course, garrisons can't spit out hostiles indefinitely. There is a delay before a given garrison will respond to another event, and even some types of responses don't come all at once--a single response might be spread out over time, another reason to not hang around, unless your plan is to attack it :D

Like any other machine you can also physically destroy/disabled a Garrison Access, only in this case it's especially meaningful in that hostiles will no longer be able to use it as a point of entry/exit. Doing this will of course piss them off, but leaving them with a close-proximity source of reinforcements is both annoying and dangerous.

However, if you attack and fail to destroy it pretty quickly, there's a good chance you'll be in for some company. It's perfectly understandable if you want to just leave these things alone and give them a wide berth. (Actually, you'd also want to leave them intact if you've installed a Trojan, but... we haven't talked about those yet =p.)

That said, there is another advantage to destroying them: For each Garrison Access taken out of commission, Programmer dispatch frequency is further reduced. Plus if you're really intent on the old Programmer tracing strategy, each garrison destroyed eliminates another distraction in the search for normal access points.

Ah, another benefit of Garrison Access being a machine--we can hack it!

Like everything Cogmind, there are always multiple strategic aspects to a feature, and hacking helps add more dimensions to this reinforcement mechanic, or as you'll eventually discover, even turn it on the enemy! This is where things really get interesting...

Where does the rabbit hole lead? Do you really want to find out?

Note that the Garrison Access hacking system is no different from any other interactive machine, tracing and all. That means you'll probably want to avoid being traced at a garrison, since the response will come from right there! Normally you have ample time to leave an area after being traced; not so when you're standing on the source of the squad sent to investigate.

With the advent of Garrison Access machines, we also have two new categories of so-called "unauthorized hacks." Trojans and Brute Force Hacks will be covered two posts from now--five of them are applicable to garrisons. How would you like to tell all squads emerging from a given access point to go somewhere else instead? Better yet, how about you instruct the garrison system to reprogram them to believe you're their new leader ;).

In the past, destruction of machines has mostly been a case of collateral damage, not something you set out to do (triggering explosive machines being an occasional exception). That has changed with the addition of garrisons, which you will at some point or another probably want to take out. (This also applies to Garrison Relays and Phase Generators, but those are two machines new to Alpha 4 that I haven't yet introduced--next post!)

So at this point you'll appreciate access to essential stats, stats that the window info is now capable of providing. You can access this information in the same manner as other objects, either by right-clicking on it or using keyboard examine/look mode.

Opening the info for a Fusion Modulator. Oooh, explosions...

Aside from letting you know the armor value of any given machine, the info window's most useful feature is its State identifier. Especially informative for interactive machines, that value can display: 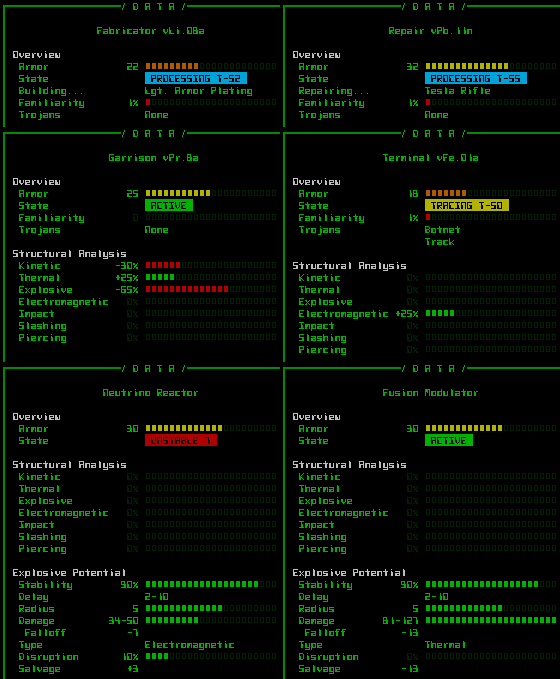 A collection of info for various types of machine systems in different states.

Notice that you also get a convenient list of installed Trojans currently active on the system in question :)

Information about resistances and explosive potential is only available while using a Structural Scanner.

Next time I'll be introducing where that unlocked Garrison Access actually leads (or you can explore it for yourself in Alpha 4).