If you decide it's a tl;dr, you will contract a very serious case of anatidaephobia. Now go out and spread the word!

The player starts on the world map where each level is displayed by a square. The house in the middle of the map is the Shop, where players will be able to buy different accessories to aid the player in either offense or defense.

As a player starts a level, they can choose between the spells they acquired, to use during the level, as well as read up on information about the kind of goblins or other events will take place during the level.

When the level begins, the goblins will move from their base (left side of the screen) to steal gold (right side of the screen). Once the gold is stolen, they will make their way back to their base to unload their spoils and return for more. During this time, the player may attempt to steal some gold from the bulging loot bags the goblins carry, but once some gold is earned from the bags, the player won’t be able to take more gold from the same bag for a short duration. 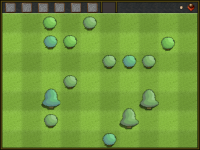 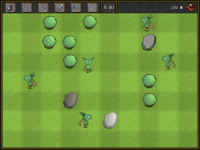 There are risks, however! There’s a chance a goblin picked up a bomb instead of gold, which will explode once the player attempts to gain the loot in those bags. The bomb will only be visible once the cursor hovers over the goblin, so mindless clicking is to be used at own risk! When the bomb explodes, the player’s score suffers, along with the ability to take gold from the goblins for a short duration.

To unlock the next level, the player’s score must reach a certain amount before time is up. If the player’s score far succeeds the level’s requirement, a bonus level will be revealed. These levels are tougher to complete when compared to the normal ones, and if the player succeeds in completing them, the rewards will be great, such as new skills and items which can’t be purchased at the Shop. If the player fails to complete the bonus level, they will have to replay the previous level to gain access for the bonus once more.

As the player progresses through the game and completes more levels, the player will come across new type of enemies, skills and items. The game’s goal is to complete a fortress, which the player can start on building after completing the sixth level. This also gives a new aspect of the game, since the player will be able to gain more fortune, but will also be the target of goblin raiding the fortress from time to time.