Made a lot of progress with the game this week from the release of the Demo last week, All 35 levels that I targeted as my Quota are in the game, playable and do not break(to my knowledge) I still have some general polish to do with game balance and need to work on UI, Skin system implementation and a few optimization tweaks.

The game has progressed significantly since my last wave of updates! I now have the entire 35 levels I set as my completion goal ready to play in the game. Some of them need a bit of balancing to either reduce/increase difficulty in certain aspects and they need a thorough testing to make ensure they are completable even if very challenging! I will drop a few teaser screenshots of some of the later levels down below! 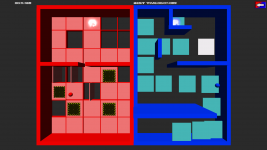 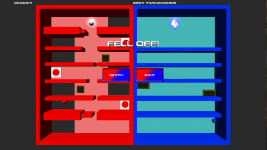 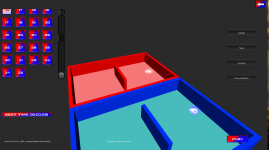 The next thing I plan to work on is the UI again as I need to add more options to the options menu, include the unlockable player skins that a player should be able to choose from a Right/left scrolling menu list. Some player skins will be unlocked on the initial game and then the more levels you play the more skins you will unlock. Also skins will be unlockable for beating times on levels and various other achievements within certain levels.

My plan for the game post publish (coming within two weeks) is to keep adding content through the use of patches, so I will be working on some wintery/christmas theme levels to add to the initial 35 once the game is released and these will all be free, therefore adding to the value of the game for anyone who wants to purchase immediately or increasing the value of the game down the line for anybody afterwards who purchases. All of the additional content of the game and patches will remain free (until the end of time or the zombie apocalypse occurs!)

As you can see from the screenshots above I have added a drop shadow to the feedback text on screen so that it is legible and doesn't blend in with some of the level colours. I did this in Unity by simply duplicating my initial text, applying a black material to the Earth text font for the game which I got here and applying an offset of .8 to it so it appears to be below the original GUI Text.

So the path for the game for the next week will be to really tighten the experience up UI wise and add more options/skins etc, more options for the player, investigate an easier way to set up controls and change mappings in-game although Unity launcher kindly provides a way to hook a joypad up in their launcher! And also to test the game heavily and try to polish everything I have made as much as humanly possible. I also need to get to work on more tracks for the soundtrack as well as fixing the pesky sound checking bug on tabbing out!

I am aiming to send the publish application to Desura for the game on or before the 14th December as that is the deadline I have imposed on myself, I work very well under pressure! When the game goes on sale for price point, I will be looking at the lowest possible price point as it is quite a short game in its current form, not particularly a lot of eye candy in as I am a horrible artist by my own admission, and my personal opinion on the price point is I want it to be a cheap, fun little game that can get as widely distributed as possible and be able to bring as wide an audience to it as possible. I haven't researched what the minimum price you can set a game is yet but I feel anywhere between 69p- £1.99 would be the ideal price point.

Any funds generated from the game will be used to put towards buying a copy of Unity pro and the Android exporter for Unity for up and coming projects I have in the pipeline. As for the future of ReversE there will be regular content updates, even if regular in valve time sense, but the game will continue to be developed for and supported after release!

To all the people who have checked out, fed back and downloaded the game so far a huge thankyou, and to those of you who have also voted for ReversE to be Indie of the year, a massive thanks, keep spreading the word and I will update here soon with more progress!