Some in depth information on how Colony Development works in the game.

I have started work on the colony development features. This is a screenshot of how the colony interface screen currently looks. 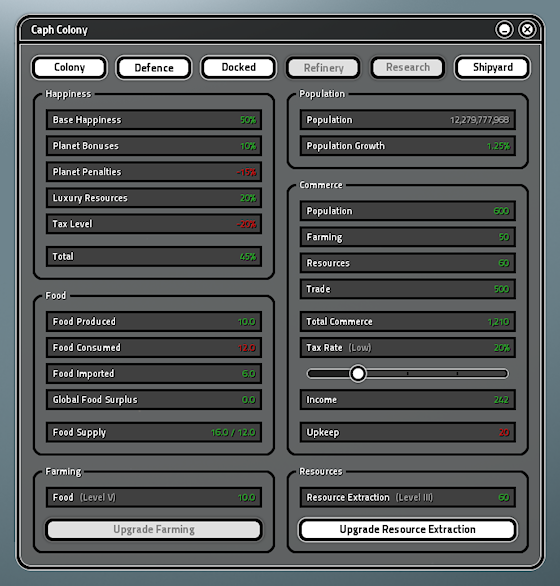 I will go into each catagory in more detail, but I am hoping most of the values are quite self explanatory. In the game you can hover over each of them with the mouse to display tooltips with a full description and breakdown of how the values are calculated. The buttons along the top are used for navigating to the different pages.

Each planet type has a maximum population it can support, temperate being the highest (7 to 15 billion depending on planet size) and volcanic the lowest (1 billion, due to less suitable building space)

The maximum population values still need some adjusting. I havnt much of an idea how many people ice, ocean, carbon and iron planets could realistically sustain for example, assuming the advanced technology was available.

Most commerce and income from a planet will come from a high population. But it will take quite some time for them to grow to the maximum it can sustain.

Still unsure of how conquering planets will work exactly and whether the existing population gets eradicated, integrated into the conquering faction or something else entirely. There wont be troop invasions or ground battles.

Excess food produced at a colony gets added to the global empire-wide surplus value and then is imported at colonies which have a shortage. Any remaining surplus food available is spread evenly between all colonies to increase their population growth rate.

Happiness level determines the chance of revolt and has a big effect on the population growth rate. Even if you have enough food available, the colony wont grow unless the population is happy.

There are lots of planet bonuses/penalties that can affect happiness, such as meteor showers, acid rain, seismic activity, planetary rings and many others.

If the happiness level goes below 0-25% for too long it will risk triggering a rather nasty revolt penalty at the colony which lasts for some time. There probably wont be a feature where you can lose control of the colony to a revolt or rebellion however. Will maybe be added in a future update/expansion.

Colonising a planet which has a trade resource gives a happiness bonus to all colonies in your empire and a big boost to commerce at the planet, depending on which resource it is. Access to more than one of the same resource can be traded away to other empires and used in diplomacy. Having access to all of the luxury resources will provide a significant boost to happiness and population growth rates.

Commerce at the planet mainly comes from a high population or having access to valuable trade resources. Small amounts are generated from farming and natural resources, but these are more helpful during the early stages of colony development.

You can change the tax rate at each colony, which will determine the percentage income you receive from the total commerce value. Setting it too high will decrease happiness which results in lower population growth rate and increased risk of a revolt.

Colony income is added to the empires total credits (per second) Ships will also now have an upkeep cost rather than using the supply depot facilities briefly mentioned in an earlier post.

Going into negative credits for too long will trigger a bankrupt penalty for all colonies and will be extremely damaging to your empire.

Colonies on the easily colonisable planet types will cost the less to support while the more hostile environments such as volcanic, iron and carbon will be a lot more expensive.

You can only build and upgrade farming on barren, temperate, ocean (fisheries) and jungle planet types. Each can produce varying amounts, jungle being the highest. To produce food on the other less hospitable planet types you need to build Hydroponic facilities. These will use up valuable colony building slots. Developing dedicated farming colonies will be a good strategy.

These are not metal resources that you can use to build things, but natural resources which benefit commerce and increases the planet income. Resource rich planets like iron, carbon and volcanic will have the highest values.

With the addition of food and trade resources as well as the modules, ore and metals from mining I'm starting to distance myself from the earlier idea of having everything needing to be transported by ship rather than getting added to a hidden global resource pool as in most RTS games.

It's possible that it could get too complicated or annoying to manage ship transport and getting the AI to do all of this intelligently could be difficult. This isnt an announcement that I'm removing the transporting resources feature, just that I have some concerns and it may ultimately be changed once its been tested with everything else working together. However I will do my best to keep the feature as I really like it.

There is still some work to get colony development properly implemented so let me know if you see any obvious problems or feedback you might have.

You can now also follow the development of Galaxial on Facebook where I have created a page.

What about just having a certain resource type that must be transported from planet to planet for certain units or technologies, while basic resources are shared automatically?
That way you don't have to manage your infrastructure so much to be functional, but having transport routes is still beneficial.

I like the idea of having to manually manage your empire's resources, for example, deliberately having a food shortage in some areas so you can have a larger surplus elsewhere. Maybe the auto-equaling(?) feature could be an option in your empire management screen.

The best approach for transporting I think will be a balance between the two systems. So the main resources (ore/metals) used for building ships will require transport as there would be less routes to assign, between mining operations, refinery and shipyard colonies. Completed research data from labs will also need transporting back to your capital.

This will keep the importance of transport routes and not require much micro-management.

Other resources which would get complicated and tedious to manage, such as credits, food and trade goods will almost certainly use the global pool system however.

Temperate, Desert and Barren planets could have relatively high maximum population values (7 to 15 billion like you suggested) and give a small initial bonus to food production, construction or research while Arctic, Volcanic and Ocean have very low initial maxima (100,000 to 250,000 units) that can be improved drastically with efficient but expensive researches (Advanced terraforming; Deep sea construction; Giant Hothouses etc...). Each of those planet types gains the ability to sustain a large number of additional population (0.5 to 1 billion for Volcanic and Arctic planets, 1 to 10 billion for Ocean depending on size) as well as a strong special bonus depending on the planet type (Volcanic planets improve nearby mining ouput and/or nearby refineries, Arctic planets give boni to ship construction and/or research, Ocean planets give better trade income and/or Food production).

With the research being rather costly (maybe also time intensive?) the player must decide which planet type and bonus yields the best results in their situation, also influencing their decision which planets to take and hold in what order.

With this you would have three "normal" and three "special" planet types, the normal planets would be responsible for the brunt of resourcing and production in the beginning, getting your empire go, while the special planets are more valuable in the mid to lategame where the researched boni greatly improve their attributes.

Especially the low initial maximum population on hostile planet types and requiring research to improve. I will definitely add that.

Also the different planet types giving bonuses to various things is already implemented much as how you described.

Always glad to be of help.

I really like the look and the features, but in my opinion it could be a bit bigger but i really like it already!