This video shows some "Behind the Scenes" of the new animations for Ahmad al-Ghazzawi, the protagonist of Fursan al-Aqsa - Knights of al-Aqsa Mosque, from the Motion Capture using a Kinect Xbox360 Camera untill the final animations in-game.

In game development is a common practice to use placeholder assets, which can be 3D Models, Textures and even Animations. Whenever I first began developing this game 2 years ago, I use the default UDK AnimationSet, which includes all the Character Animations used in Unreal Tournament 3. However, to give my game some originality, I decided to replace some of these stock UT3 (Unreal Tournament 3) animations by other animations from my Assets Library (which includes MOCAP animations from MegaMoCap, TrueBones, TurboSquid, NaturalMotion, and others).

I did not make too much polishments on these first animations I used, as I was just bored to look all time to the Default UDK Animations, so I just wanted something provisory, to polish later. 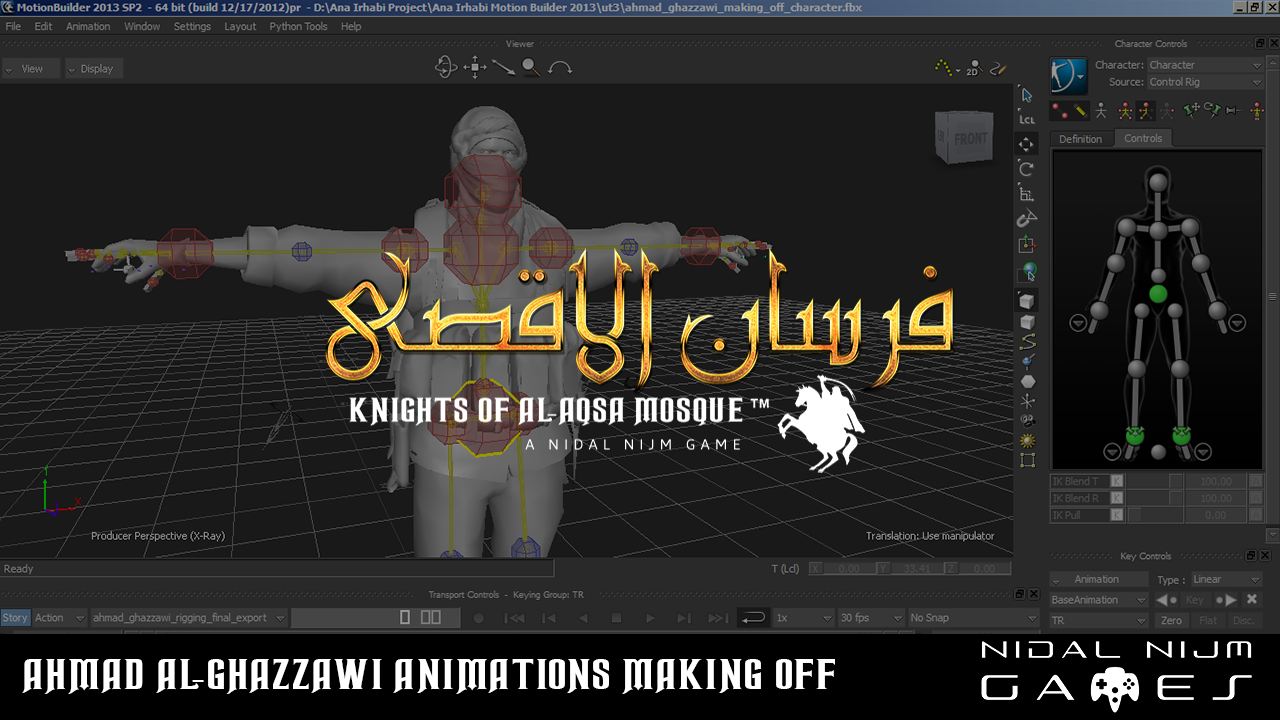 UDK/UE3 Engine has a perfectly working Animation System, pre-configured to work outside the box for a Shooter Game. One of these functions is what we call Aiming Profiles, which means, for any type of weapon the player carries, there are a different set of animations: in example, run forward rifle, run left pistol, rifle idle animation, bazooka run forward, and so on. For the sake of simplicity, I just replaced many of these stock UDK animationsby these new mocap files (retargetting these animations to the default UDK Skeleton in Motion Builder).

It would be very cool if using custom animations for UDK was just a matter of copy and paste. Even though the retargetting animations process is flawlessy inside Motion Builder, however, because of differences in skeleton size (UDK Skeleton x Custom MOCAP Skeletons), I had to manually edit each mocap animation to fit into UDK Skeleton. The fixes is just reposition of the character skeleton to fit and work flawlessly. In Motion Builder I just added a new animaton layer and added some key frame animations to fix the MOCAP, one by one.

Added to this, I did some Custom MOCAP using my Kinect Camera, as you san see in the video above. I must admit that is far better using professional captured MOCAP files than doing it yourself. I used Custom Kinect MOCAP files whenever I could not find, inside my assets library, the animation wanted, so it is time for "Do it Yourself". Again, after some (MANY) tweaks on these custom kinect mocap files, I got something good looking wich you can check aswell on the above video. And these will be the final animations for the game's protagonist.

I hope you are enjoying de follow the development of Fursan al-Aqsa.

P.S: If you did not vote yet for Fursan al-Aqsa, please vote now, it is disputing the Top 10 Indie Games of 2019, it is now the #1 of Upcoming Third Person Shooter:
Tiny.cc

Cheers and until Next Update!