A big announcement from the CEO Xoom about on-going development to the game, equipment, Units, tools, PPO's, all sorts of cool new stuff you'll want to know about...read on...

This is one of those articles you'll want to really digest and then share it with all of your squad mates - IT IS A BIG DEAL! Hope you've got your drink poured, get ready for the HYPE!!!

It's important to note that this is a work in progress and some items may be added / removed based on current working conditions. Prior to release a full completed readme will be distributed.

Finally, after a long time we're going to be rolling out Bomber Loadouts. More fighter/bomber variants will receive load out options in the future, but this release will include the following aircraft to start:

Here is what it will look like in-game (currently in testing) where you can click a check box to the corresponding value shown below:

Ask anyone who's ever driven a Stug, you'll hear, "Where's the machine-gun?" Great news, it's on the way for the new Stug III Ausf G w/Saukopf and Schürtzen model! 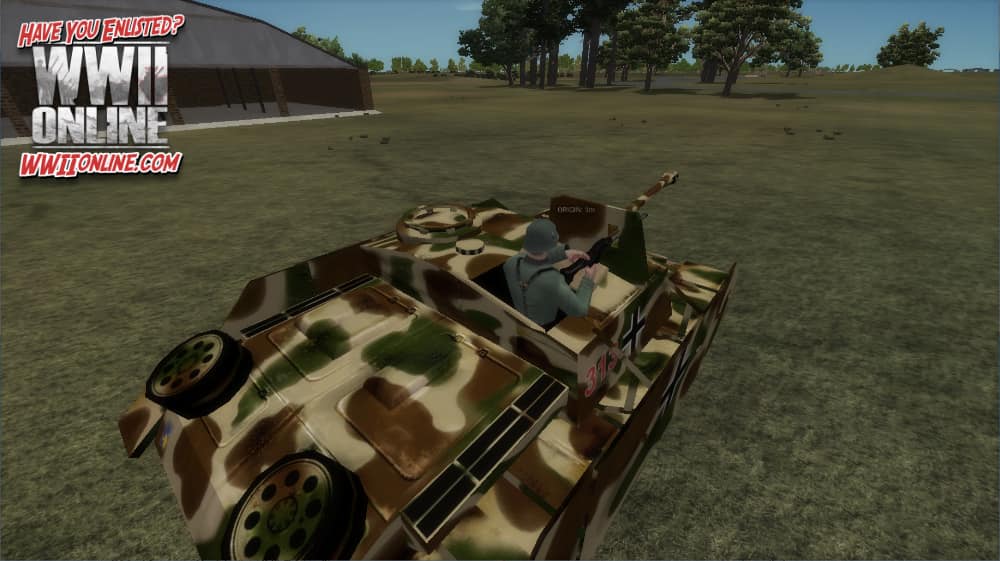 We've started the process of updating old aircraft gauges recognizing they are due for an update. Both Allied and Axis aircraft are receiving incremental updates, and we'll put before and after pictures of the Bf-109 to give you a reference.

We announced the development of the Modular PPO Trench System in January 2020 and it's now ready for prime time.

"A modular system is a series of parts that can be connected together (think of a puzzle). The inspiration behind this design was to take on a new challenge by delivering something our players have never seen us do yet, and leverage an incredibly great part of our game called the PPO mechanism."

(Click the left picture to go to the article, video demonstration included) 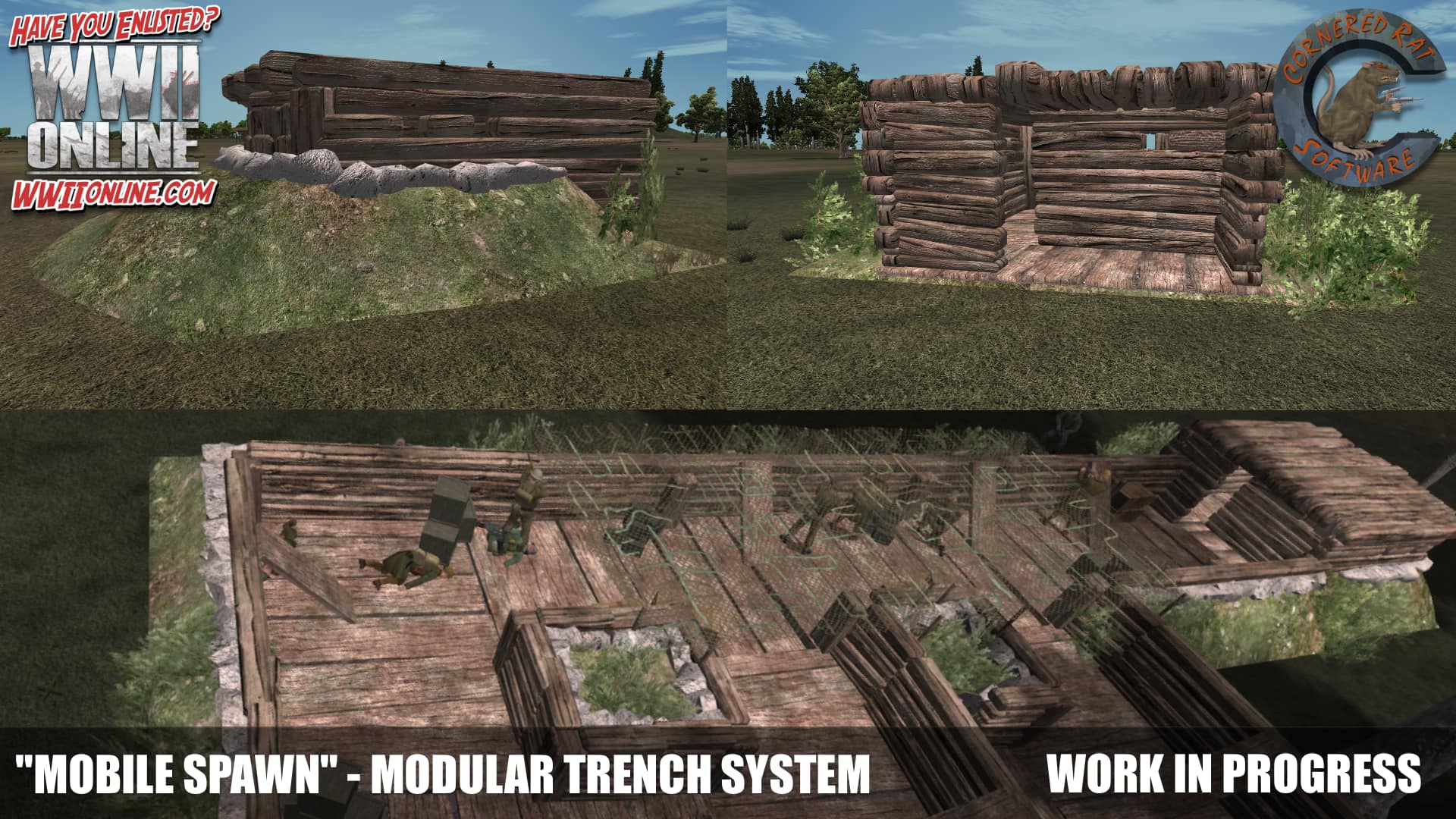 (Click the picture on the right to go to the article)

With the implementation of the modular trench system, we're now ready to push forward on our plan to separate the Engineer class into two different units. We went into great detail to explain why we're doing this and also give you the load outs for each unit. Both of these classes will be play-able by Premium & Hero Subscribers.

We've been asked for sometime, "How come I cannot connect my sandbags or barbed wire?" Effective this patch, it will now be possible to connect them! We anticipate seeing a higher usage of barbed wire fences to block enemy infantry positions, and more sophisticated sandbag emplacements. Get your PPO (player placed object) tool out and start fortifying your positions with greater flexibility now! 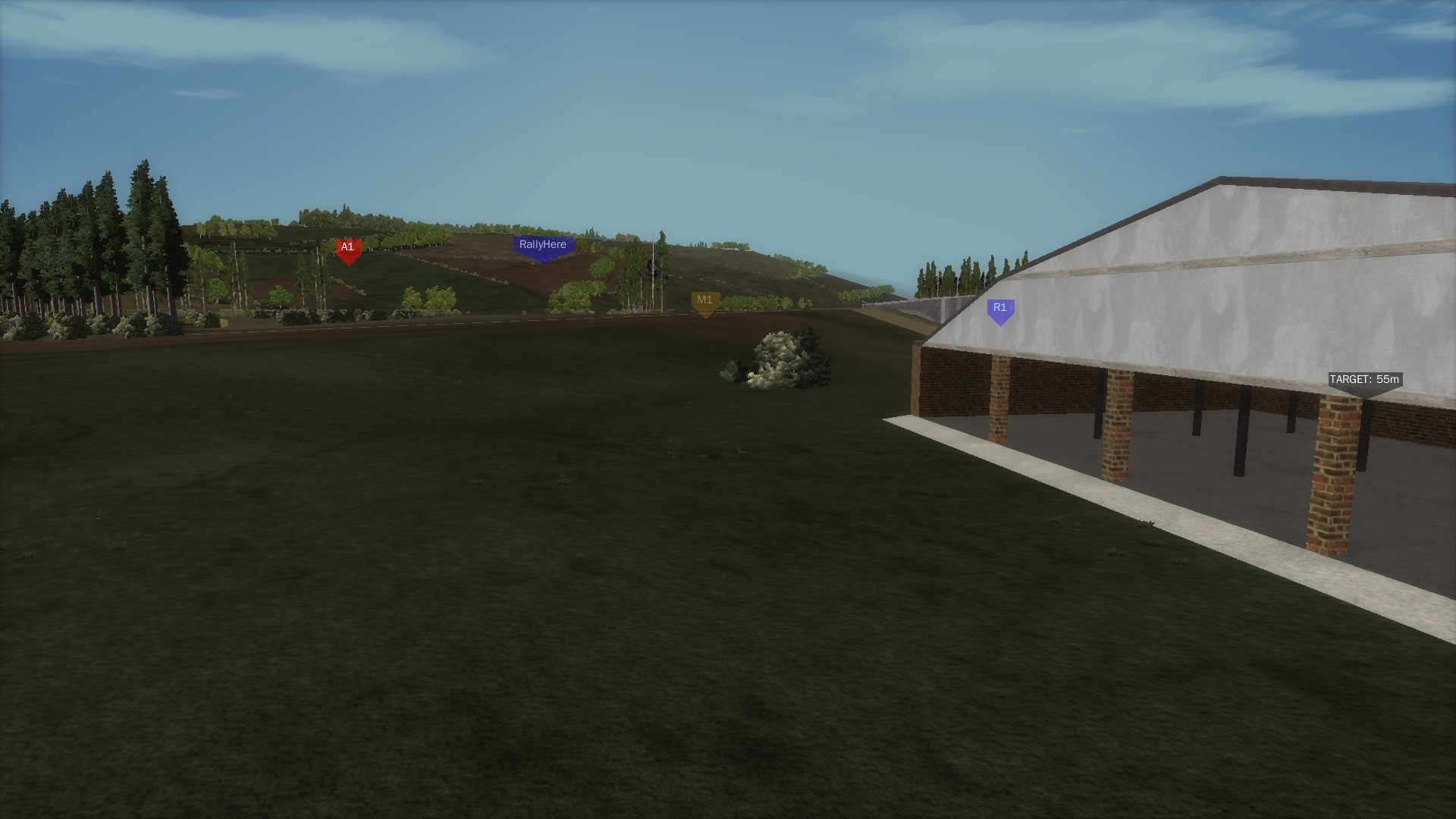 Directing users in WWII Online is the essential element of leadership. Whether you're a combat leader, squad leader or high command officer, being able to get players where you need them to be is KEY. Delivering the mission leader heads up display (HUD) waypoints is a BIG DEAL.

When a mission leader puts down a waypoint, it will now be shown on your HUD so you can see exactly where your leader needs you to be without having to pop your map open. It is important for mission leaders to be selective and not overwhelm users with too much information however!

WWII Online is all about organization, and we're pleased to announce an important development as it pertain to waypoints. As you know, when you have the same TARGET, contact reports of suspected enemy positions are shared. However, WAYPOINTS are not.

As of 1.36.5.0 that will change, and Waypoints will be shared across missions which have the same TARGET. This enables cross-mission coordination and greater cohesion between mission leaders and officers to organize / direction troops.

From SNIPER62: Bombs being STOs (Server Tracked Objects) has been a bomber pilot's request for many years. As it currently stands, bomber pilots have to fly below 700m altitude in order to attain kills on infantry. While this can create some havoc and look pretty cool when a formation of bombers comes over head, it's not very realistic as most bombing was done at normal bombing altitudes during WW2. An STO allows a bomber to not have to be within visual range of the infantry in oder to allow their bombs to effect those infantry on the ground. This update should allow for the bomber pilots to get off of the deck and up where the rest of the air war is. From the perspective of the ground guys, be sure to keep your AAA around and don't forget to call in CAP (Combat Air Patrol) from your fighter pilot buddies.

Grenades and Mortars currently are already STOs so the infrastructure was there to make bombs also act as STOs but that required some extra work behind the scenes. The Development team was able to figure out the needed updates to the code and have sent QA the first test client. Having this capablity also opens the door to many other options that previously weren't able to be accomplished. Like destroyers being able to barrage a town from kilometers away or in the future, artilery. Bombs being made into STOs is just the begining of a bright future for WWII Online. Now the question becomes, who will become the first bomber pilot to get kills from 5KM+?

The below is a series of updates pertaining to our development roadmap and is slated for future releases.

We've been looking closely at the Sturmgewehr 44 and will be looking to get it into game soon (no, really). Its effective range is about 200 meters or that 4th target marker shown on the right side of this image. The STG44 will be introduced right about when US Forces are added to the campaign, specific supply numbers have not yet been decided but it will be in limited quantity across the battlefield.

Work was initially started on these weapons but still require extensive animation work. We are working on creative work arounds to push these deliveries forward. CRS is actively looking for someone who specializes in 3DS Max (familiarity with Biped rigs) and this said individual could help us deliver a lot more - quicker. If you know someone who can help (maybe you?) have them contact us at: jobs@corneredrats.com.

We have great news to report here! Not only do we have most to the art work done here, we have been able to effectively outsource someone who is a veteran (specialist) in the Creator software that our game depends on. While this task remains a work in progress we are seeing some positive motion on it. We'd also like to thank BMBM who has carried it this far and welcome aboard our new artist "Rusty" who is supporting this effort. HATCH is also preparing to get the flight model ready on this as well, and new bomber loadout selection(s) and once all of those pieces come together it won't be long until it's game-ready.

Here's a never before seen (work in progress) shot of the Ju88A4 cockpit in WWII Online. Do note, the bomb sight will be more cosmetic for dive-bombing it will include a reticle but will not have all of the real-world logic associated with it until a later time.

Our new artist we mentioned (Rusty) is becoming familiar with our artwork and how it is implemented into WWII Online. His very next task will be to start work on the Allies much needed Wellington Bomber. We elected to place him onto the Ju88A4 because of the extensive work already done on this model and to push it through to completion. Worry not Allies, the Wellington is next on the list! 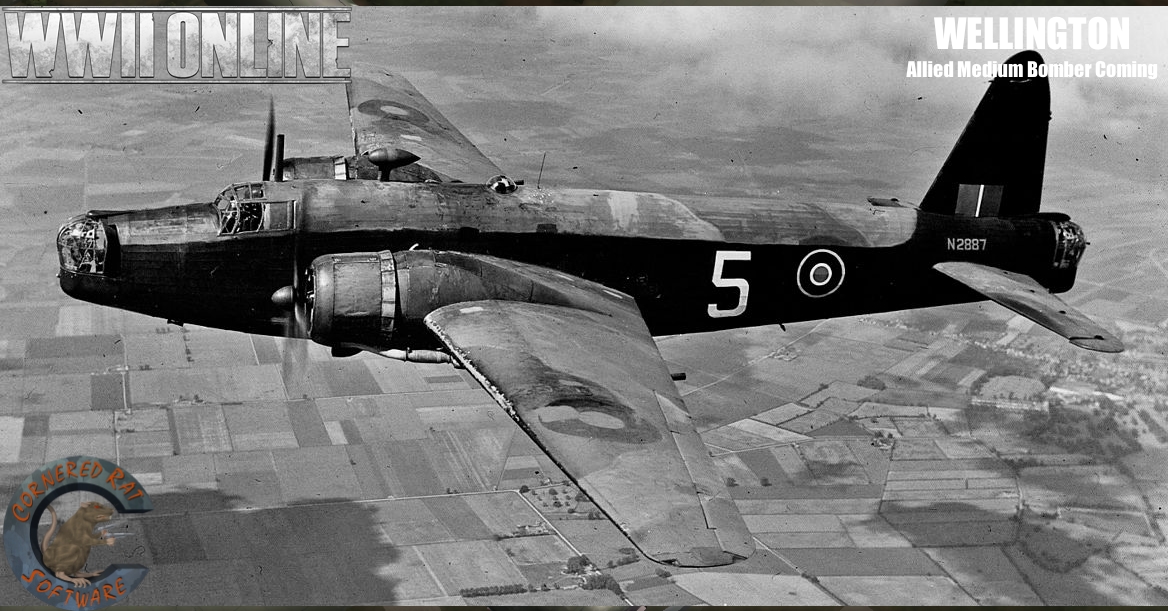 XL2RIPPR (newly promoted to Rat / Environment Lead) along with Mkw have been hard at work on opening up the cities by replacing our large urban city blocks. Sometime ago the ability to enter these buildings were removed, and we're re-opening these buildings and will have several windows, staircases, roof-top access and all sorts of easter eggs throughout them! Here is a current work in progress photo of several buildings being developed in our game world.

OTHER ITEMS IN DEVELOPMENT

I'd like to thank everyone for your maximum available grace that you offered through the last few months of 2019, our team was hit upside the head with a business critical priority to stabilize our billing system after our old processor pulled the rug out from under us. This put the team in a position to complete a 6 month project in 45 days - or else. Unsurprisingly that impacted our timeline for our dev roadmap and it also impacted the "norm" for how you guys manage your subscriptions, and we apologize for that.

THE GOOD NEWS IS... the billing system is performing accordingly and things have been ironed out for sometime now.

Well today is a special day everyone, not only do I get the opportunity on behalf of my team at CRS to announce the great news here, I am humbled that today marks my 10th year as a RAT (it's also XoomJR's 6th birthday, and my dog's 9th birthday). I'd like to thank all of you for sticking with us and giving me this opportunity to help guide WWII Online down a brighter path. We have the best gaming community ever and we are blessed with a very dedicated team here at CRS. Without those two things coming together, none of this would've been able to occur.

The good news is, we have an almost infinite lifetime as long as we stick together, and keep those subscriptions activated. It was such a joy to see 6 AO's during our welcome back soldier last week, we saw many old faces show back up, and we've been able to maintain 4 AO's (up from our average 3 in primetime) since WBS has ended. This means more people are staying with us and more people are signing up to the game (our Steam traffic for example has almost doubled).

I think it's important to say in this moment that CRS remains as dedicated as ever to taking WWII Online forward. Yes, there are some other fancier looking games come out and "new" stuff is fun. We hope that what we're doing (as outlined above) goes to show meaningful progress is being made and that we have YOUR SUPPORT. If that is the case, then we will be able to break against all odds and barriers. It may take a little more time than we'd like, but here we are; just a few days after releasing 64-bit, evaluating the SpeedTree SDK implementation, onboarding a new Creator artist to push vehicle content forward, making graphical improvements where ever we can, delivering on long-requested features (STO's, Stug's with MG's, Loadouts for vehicles) and so much more. If that doesn't get you motivated, we may have to check your pulse =).

Can I encourage you to pay attention to this next part, a little closer?

We can, and we will, do substantially more, if we can get some more resources to get the job done. Please consider upgrading your subscriptions to a monthly hero builder in an effort to supply CRS with development funding. I know we've talked about this before, but it is my duty to inform you that we CAN and we WILL get more accomplished if I can purchase the time and talent of professionals.

On behalf of our whole team at Cornered Rat Software, thank you very much for supporting and playing our game!