Stream of quest coder's consciousness, flood of features and couple of screenies to keep you updated how the big wheel has kept on turning this week regarding the quests and graphics update.

Let's wrap up this week and go to sauna. Or at least I'm going to do so

Hare's Paw, And Other Lucky Charms

A few magical items have been added. These rarities are based on folklore and can be almost exclusively obtained only by completing certain quests. A classic lucky item "rabbit's foot" will appear in the game as "hare's paw". And then there will be "Ukonvaaja", Wedge of Ukko - a magical weapon of finnish thunder 'god' Ukko. An item known to protect, heal and help in hunting.

Magical effects of the magical items will be kept quite unnoticeable in the game. You may notice that they're probably doing something, or then it might just be your imagination. This is what the game encyclopedia tells about Hare's Paw: 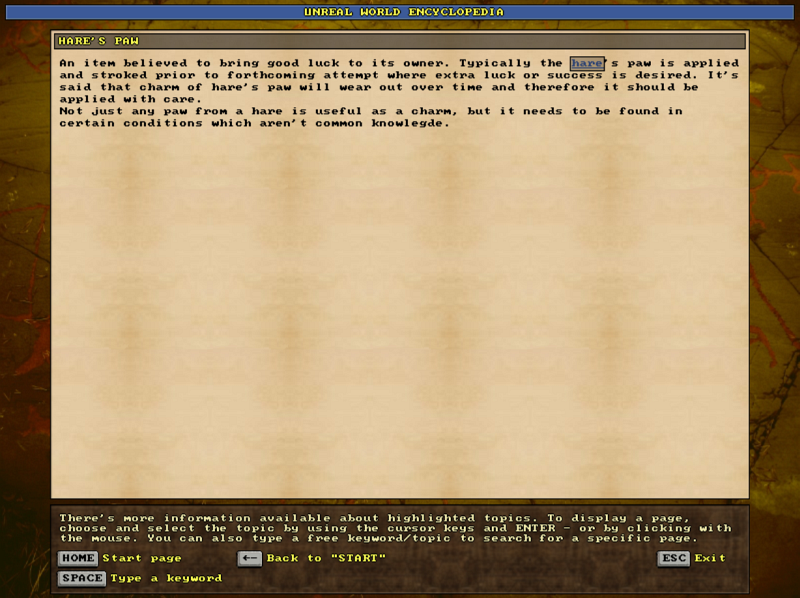 Adding the lucky items was followed by some quest playtesting. Even with debug magic in use it's quite time consuming, but needs to be done properly. Despite of some noticed glitches it was good to see how the random factors, tons of game rules and mechanics and procedural generation all play together with the quests. The plot is given and coded but the conditions, time and possibilities to complete quests can and will vary.

* One interesting idea I played around with is the possibility to continue investigating and following quest given pieces of information even after the quest itself is completed. Completed quests will stay in your quest journal, and in some cases NPCs may have spoken of things you may want to go check out even though the task itself is done. Kind of like 'easter eggs' to be discovered within quests. Preliminary work has been done in this regard, but we'll see how much stuff like this will be actually seen. At least a little bit, I promise.

* A while ago I posted at UnReal World forums about being Inspired by Spellbooks. It was hinted there that we might see some of these actual ancient spells being implemented, and now I can say it out loud that it's going to happen. It's not going to be a "spell system" overhaul, but instead you may learn spells or magical means within quests and the information to perform these spells will be available within quest dialog. It's going to be "do like this and that will happen." kind of stuff, and your character needs to follow the given instructions by using game mechanics. For example "throw seven rocks at a sheep and you'll be able to walk faster". Well, that's just an example, not an actual magical mean we're going to see in the game. But you get the picture, right.

Graphics update - the new outlook is forming up nicely

First, a brief summary for those who aren't aware of what's coming up on that front:
The next version will feature graphic overhaul. Tile size will remain roughly the same but almost everything will be redrawn. Pretty much everything will be much prettier. We call this an intermediate graphics update, and it's really something see. It doesn't stop there, but we then go for final, major graphics update which will blow the resolution, tile size and outlook into whole new dimension.

So, let's wrap up the recent progress of intermediate graphics update which we're going to see in the next version.

* There's some collaboration with pixel art contributors going on behind the scenes, and I've also been quite busy with drawing new tiles. We'll be seeing a lot more tiles in the next version as many generic tiles that represent eg. every sword or every arrow will be replaced by unique tiles for each type of item.

* Redrawn horizon box has got clouds added now. With alpha blending in use we'll be able to display cloudiness much more smoothly than previously.

It's time for a screenie. Horizon box shows the weather is slightly cloudy. The new spruce and birch trees are from Wickham's tileset. Pine tree is redrawn - as are the arrows, swords and the northern bow. There are unique tiles for blunt, broadhead and regular arrows - and unique tiles for scimitar, battlesword, bastard sword and shortsword. 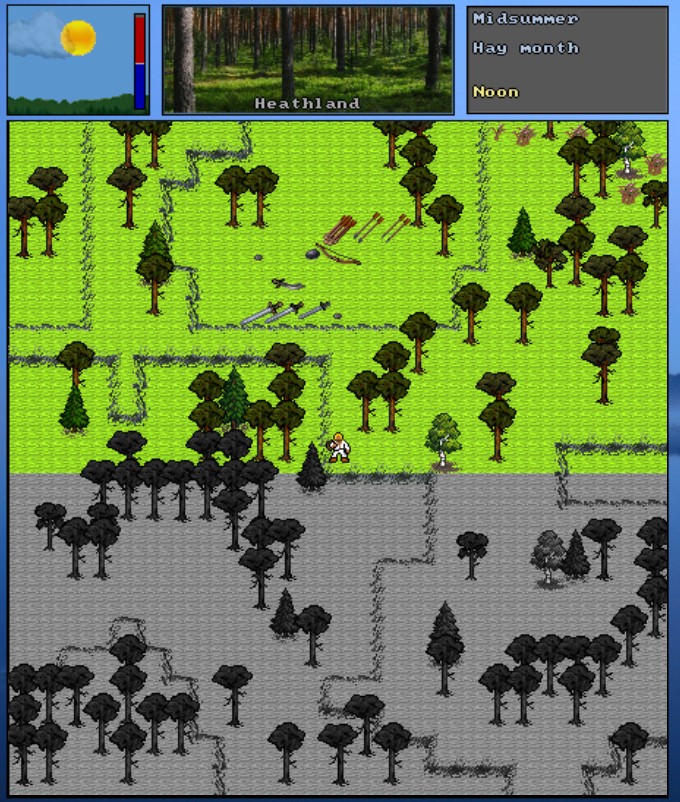 * It has been mentioned before that in the next version all the tile graphics will be in separate files. Separately moddable avatar tile has been suggested many times, and you've got it now. With major graphics update will be seeing avatars drawn to all 8 directions, but even with the upcoming intermediate graphics update it's possible for modders to draw avatars for all the eight facing directions at will.

* When redrawing skis I thought it would be nice if the skis would actually show under the character when skiing. It's done now. Moreover, I think we'll be having skis drawn for all the eight facing directions too.

Another screenie with redrawn tiles. Horizon box shows the weather has gotten quite cloudy. It wouldn't be a surprise if it started snowing soon. You see Wickham's beautiful spruces is proper action here, and the skis shown under the skiing character. There's also extra pair of skis and pot by the fire. 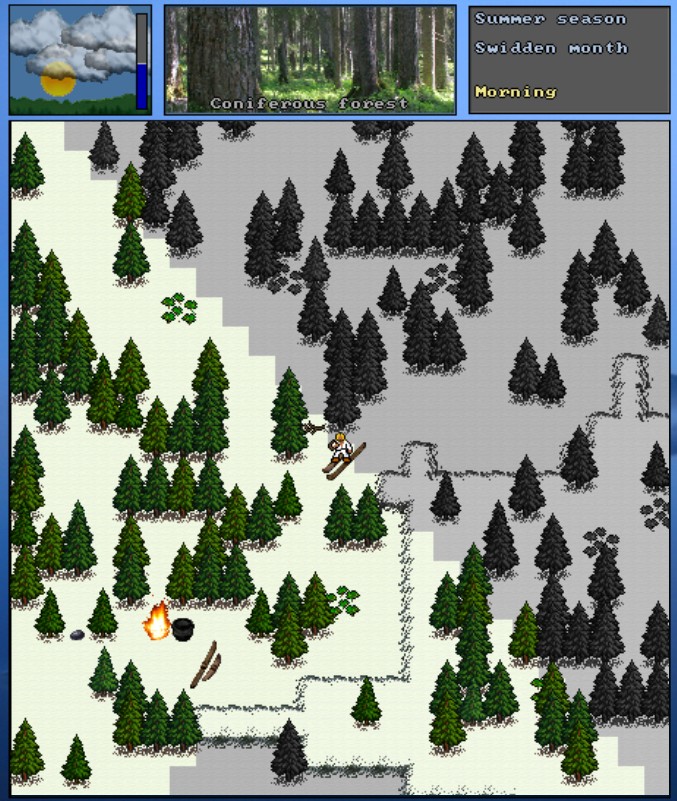 Quests, graphics and sauna - the three to be continued...

Our current video greeting 'Onwards', a short-movie in Kaurismäki style, awaits for those who are able and willing to pitch in them squirrel hides.