This week we go through all the things that have been worked on and finished lately.

Last week we didn't have a new friday diary blogentry, because I was working on the inventory hotbar. Now that it's finished and working, I thought we should do a little overview of the project. 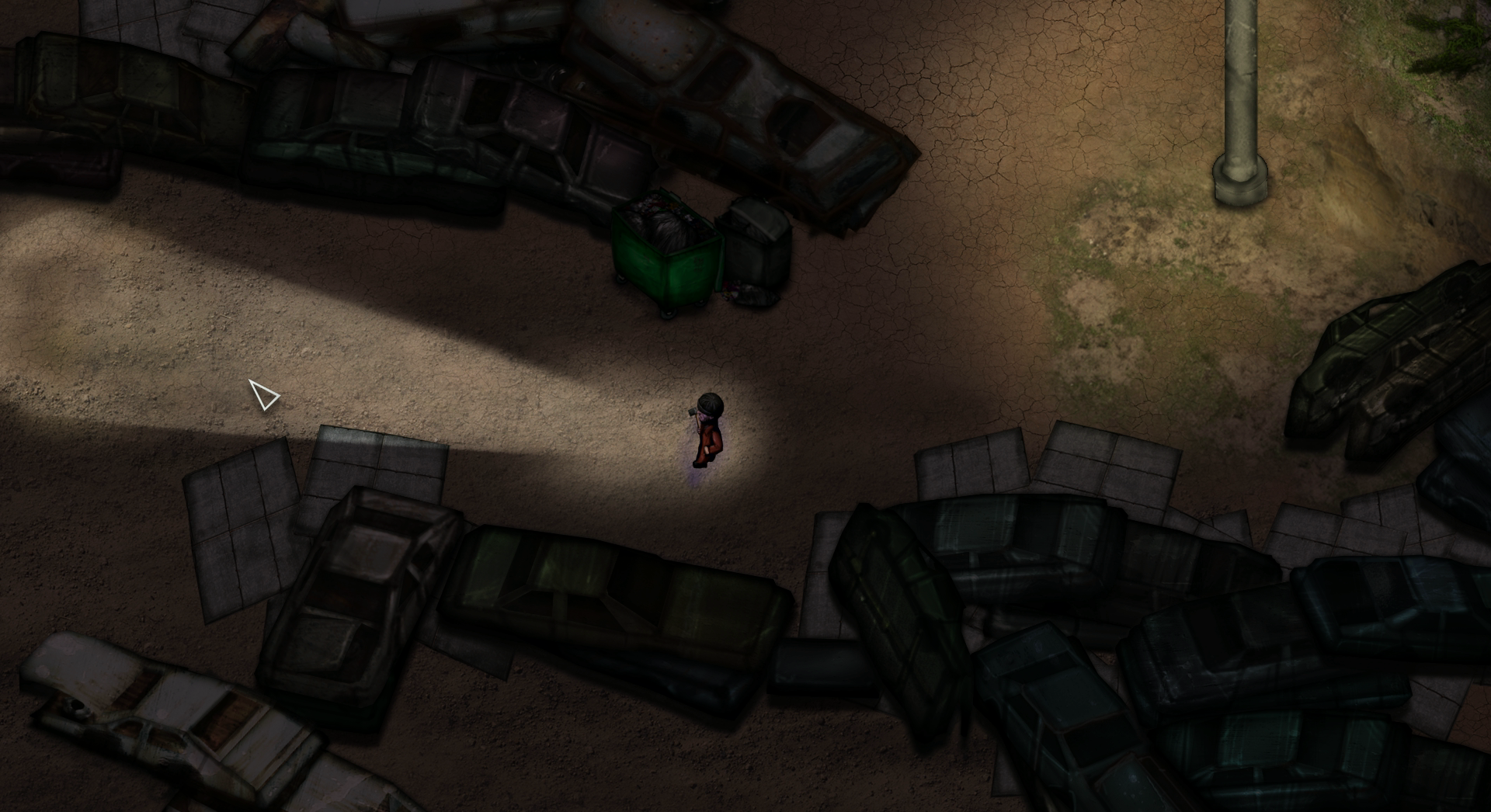 Like mentioned, the inventory now has a working hotbar, with hotkeys from 1 through 0 on the keyboard. We wanted it to be like this Deus Ex / Diablo style, where you could quickly switch through the items, and the hotbar would fade away from view.

All the current items can now be picked up and dropped, maintaining the right amount of them, and they stay with you from level to level. The save game system also had to be reworked completely, but more from that in the future.

The game is probably going to have one constant savegame, which tracks all your progress. So choosing one side quest or choosing a certain NPC dialog will also stay with you until the end of the game. The game is quite forgiving on the whole, and it's not the hardest game ever, so this could work out without major frustration. 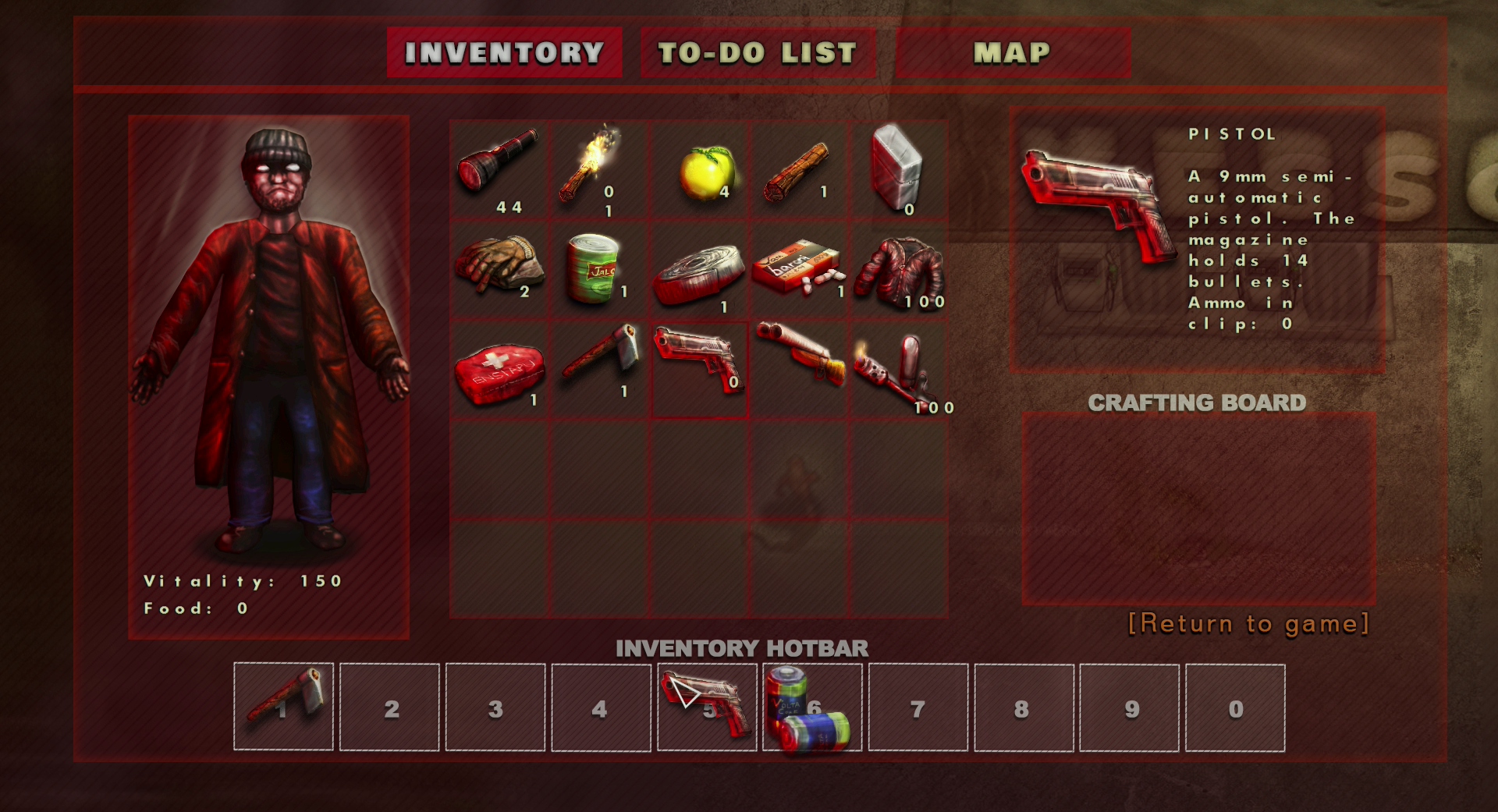 Arming Bob with the pistol at the inventory screen. 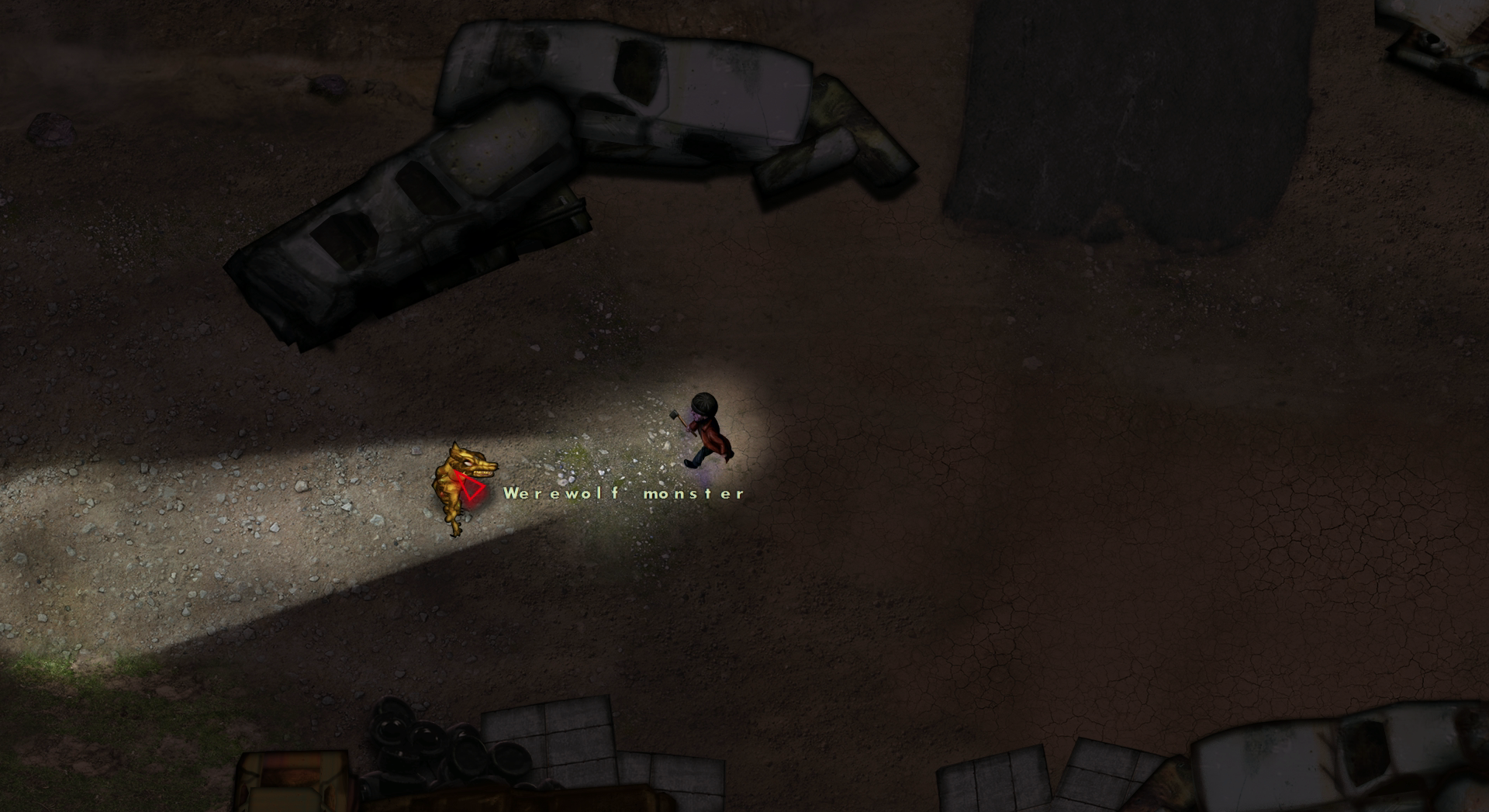 Bob finds out that the junkyard has already been infested with horrible abominations.

Since January, we've made three new scenes into the game. Every one of them is still more or less "work in progress", but it's a huge leap from what we had before. In addition to this we've converted the original scenes 1-4 to the current gameplay engine.

The game consists of eleven open world style maps, plus the end sequence. Currently we have eight of them up and running in the engine. In this month we will go over all the scenes one by one and complete their scripts, NPC dialogs and story elements, to see how they all play together.

Up to this point we've been rushing to get all the scenes done and playable, not really getting into the fine detail yet. After we're done with all the scenes, we will assemble a quality assurance team, which will go through all the scenes and pick out their bugs and errors. Like they say about art: never judge an unfinished work. 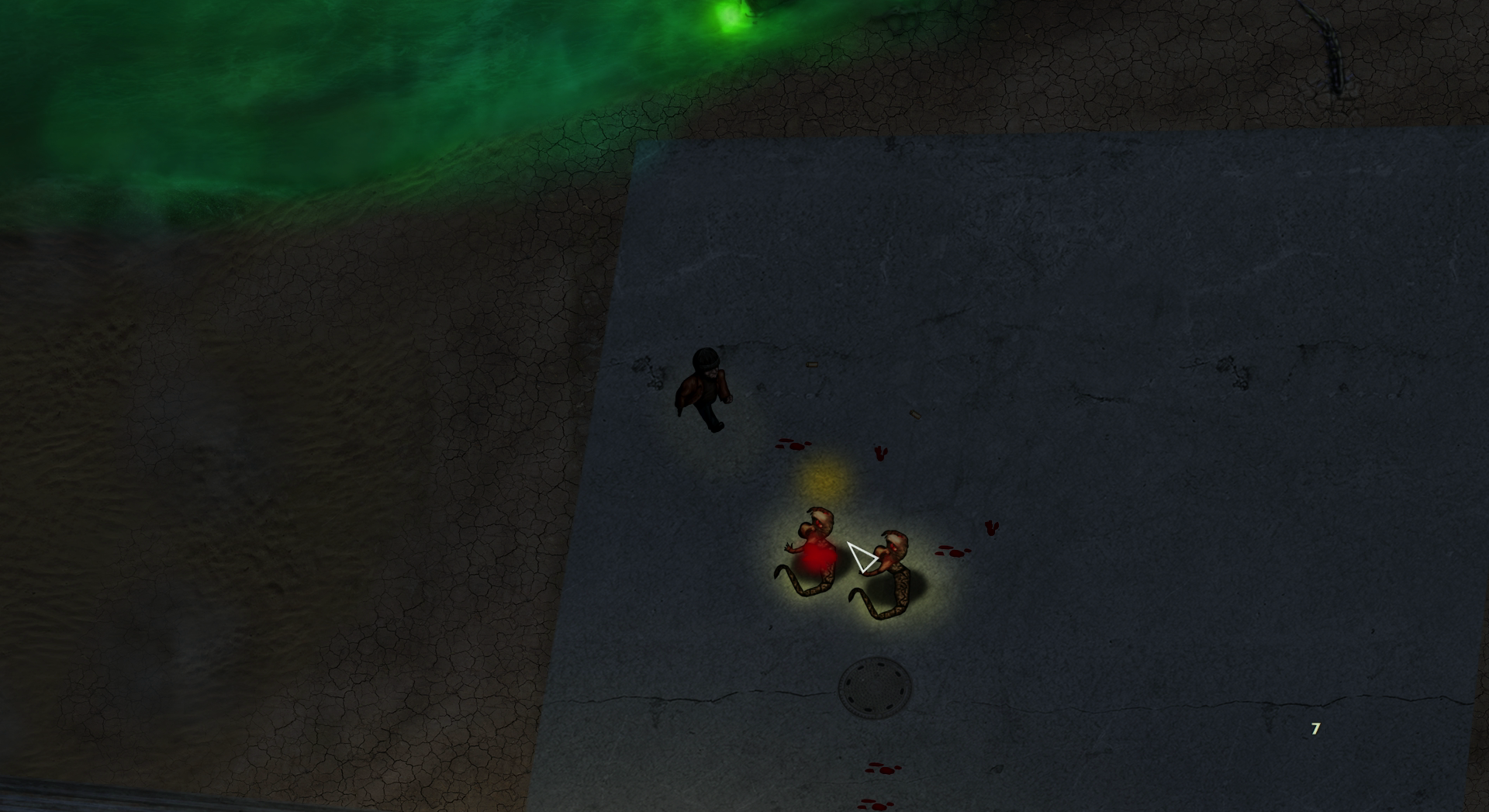 Bob facing off against Spitter monsters at the water purification plant. 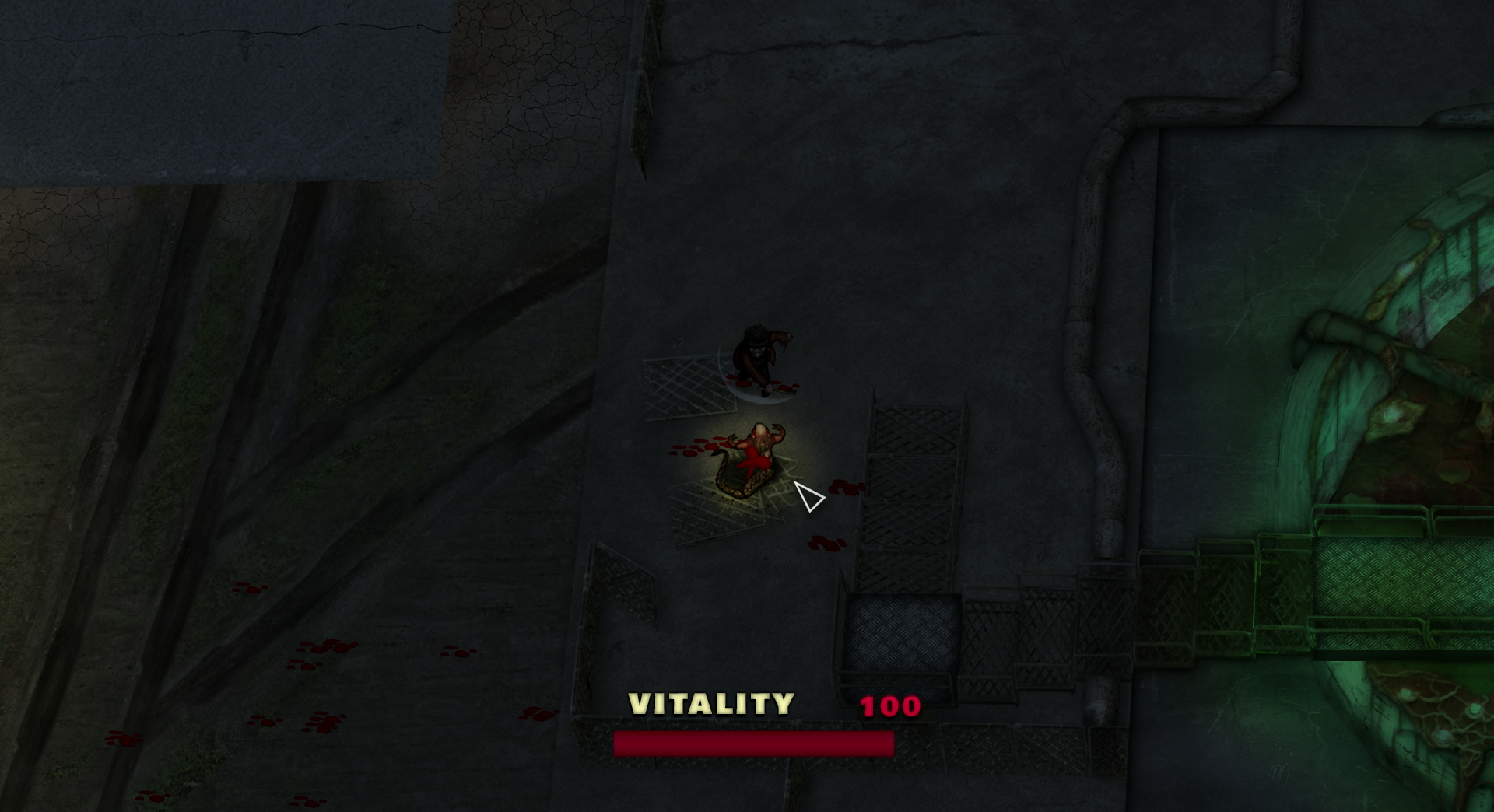 The vats filled with mutated mass give out an eerie glow.

We currently have the axe, pistol, sawed-off shotgun and flamethrower working in the game. Our character designer and artist Vesa-Pekka Koivisto is working on new animation sprites for Bob. The enemies now react to the weapons correctly, and we've fixed the lighting bugs with the projectiles. In the earlier versions the bullet light traces and spitter's glowing acid spit didn't always function properly.

Next up we need to add the other weapons to the game, and add some crafting elements to it. We haven't yet discussed the full depth of the weapon customization, so we currently don't have any in the game.

We've talked about adding simple perks to the game, enhancing the weapons abilities. Kalaban is not a full-blooded RPG, although it shares some similar features with the genre. The perk could be partially learn-by-doing and partially just killing enough monsters. Maybe opting for a certain weapon, like for example the axe, would give a small choice of additional bonuses. 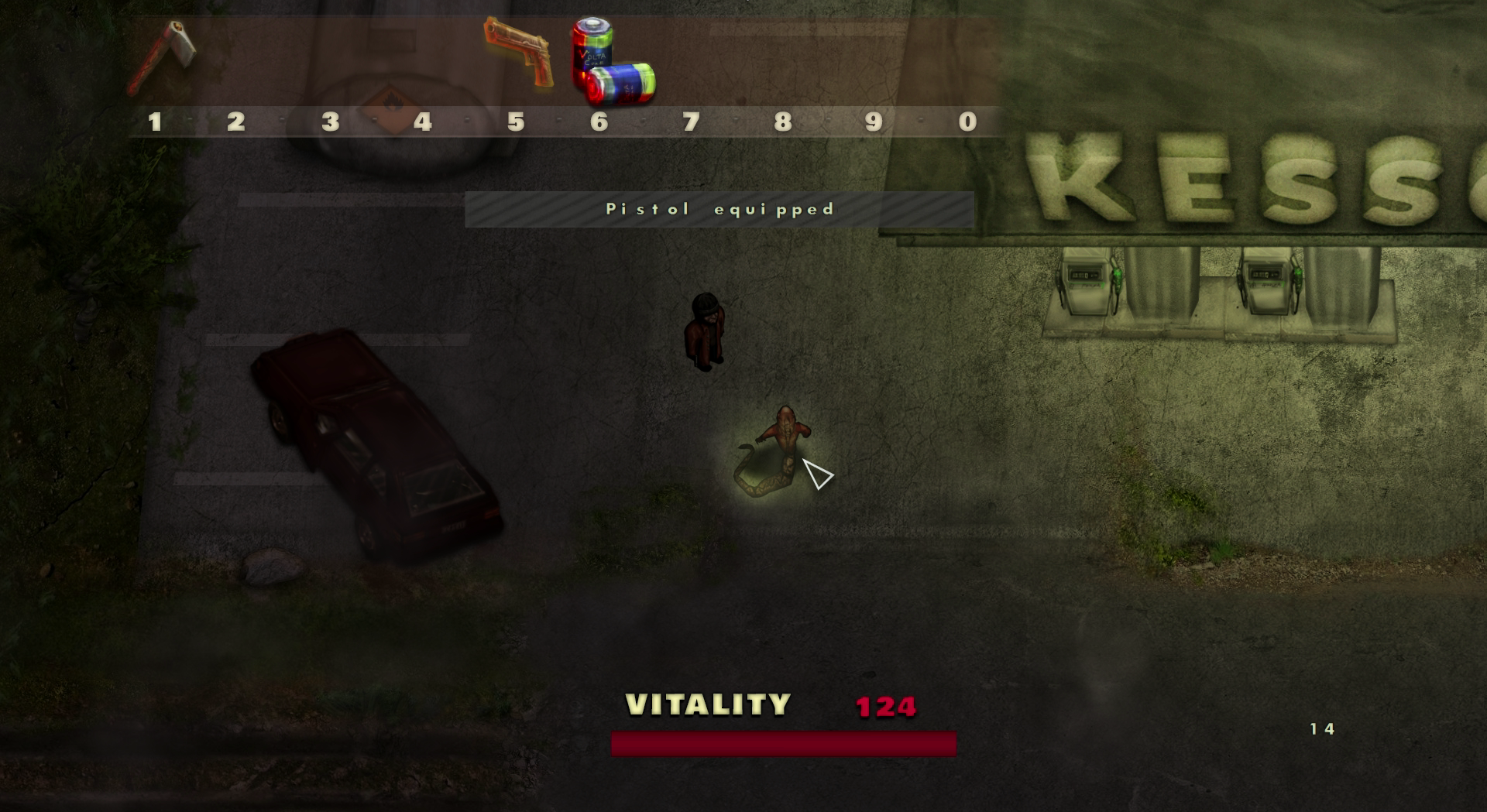 That's all for this week, folks! This was more of an informative overview than a casual rambling, and I hope you enjoyed it. Stay tuned for more updates!