A new inventory system on the works. Again. The coder is trying to hold on to his marbles.

I've gone through the pain of game development in this blog many times over. So this entry will not be one of those whiny "It's hard. It's too much of a hassle" type of entries.

But yes, today we'll be talking about the inventory. And the history between me and coding inventory system to games. 'Cause it's not a very long history, but.... Nevermind that! 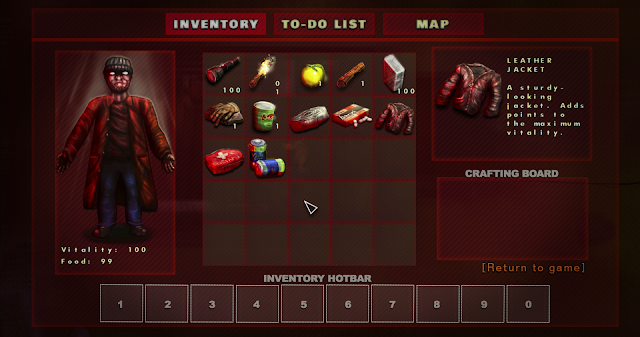 The new inventory system, with both the paper doll of Bob and item description in place.

Back in high school when me and my pals developed our own little indie games, we had no clue how to make inventory systems. Nor did we even know how to code our own save game system. In these projects there were no inventories. Besides the usual gun collection from 1 through 7, but that was it! They were just simple shooters and actioners. And that's what I'd suggest you to start from, if you're just getting into gamedev. And also sidescroller action games in general. Yes. Those are good genres to start from. And what people should consider as their V.F.P. - the acronym for Very First Project. 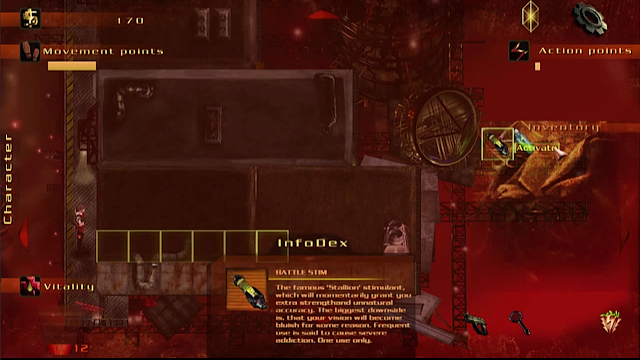 A screen grab of the Neurotron alpha demo. No, I really wouldn't recommend playing it.

But this was not case with our re-entry into gamedev back in 2014. Because, guess what was our first entry, after years of staying away from the soul-crushing indie game development? It was a retro computer role-playing game, with skills, grid-based inventory system, semi-turn-based combat and other RPG mechanics. Oh boyo.

That was one hot summer, I tell ya. Some of my friends thought I had turned into an actual monk, and had began a full-time commitment to the Lord. But no, that was not the case. It was just gamedev.

The current inventory system in Kalaban is probably the sixth one I've coded within the last two years. Yes, that's kind of.. a lot, really. And no, I'm still not an expert on the subject.

Gif of the current inventory system, still work in progress.

And now, finally, we get to the title of this blog entry: The Mountains of Code. 'Cause that's what you'll be generating while creating a new inventory system from scratch. I don't know any good method for creating a complex inventory system without going into heavy grinding. There's just no way around it: it's awful and you're just gonna have to do it! But don't worry, it's gonna look frigging awesome once you've done it.

And that's what I've been doing for the last five days, and what made me write this blog post. If you're following me on Twitter, you probably know this by now. I always try to keep my followers posted on what I do.

Once again, have a fun weekend everybody! Remember to enjoy life, keep in mind that gamedev dudes are human too, and give peace a chances, mates, chaps and gals! Thanks for reading. See ya!