An additional in-depth look into more variables for our Status Effects. (Part 6)

Before we begin, we would like to announce we’ll be working on launching a Kickstarter campaign soon, so please look forward to it!

Our last posts consisted of us going over Status Effect variables. In this one, we just have a few remaining variables to discuss, before we can proceed onto Units and Research.

Invisibility will play a key role in a lot of both Unit and Boss designs, even being a huge factor in a future race we want to develop for this game, the Gyen.

It also has some very specific logic that must be defined behind it in order to function correctly and there are a good handful of AI-related variables that must be taken care of.

We merely need to define the logic behind how both an Enemy and a Player-Unit can engage FROM invisibility, and also how they can be engaged.

The logic is quite direct- Player Units will never engage while they are Invisibile, unless they are explicitly ordered to (think of right-clicking a foe, or manually casting a spell). And nothing can engage them.

Enemies, however, can be engaged by the Player but only if its done manually. What this means is that Player has to deliberately try to cast a spell upon them. Invisibility logic behind enemies means that there is just a very slight amount of opacity to just barely see the Invisible enemy, enough so if Player sees it, they can try to manually engage it.

Enemies will always try to engage, even while Invisible. Think of it similar to an ambush, in that sense.

Post Immunity is a variable built just around adding some additional balance to Status Effects. Even though there are lots and lots of Units engaging one another in a fight at a time, its still a bit unfair to be repeatedly hit by a powerful Status Effect. For example, Freeze, which makes a Unit completely unable to do anything, would make it so a Frozen Unit does just that: nothing. Which is incredibly overpowered, as that means the Unit would just sit there, unable to do anything, while its opponents mindlessly wail upon it until it dies.

Leashing an opponent is an interesting ability. It forces the Leashed Unit to “follow” its master (for the duration). Think of it like a pulling Status Effect, useful for grabbing a single Unit from a group and pulling it into your army so you can dispose of it more easily.

Fear is like the opposite of Leash- instead of dragging a Unit close, the Unit flees for a short duration. While pulling a foe can be a good strategy for quickly defeating it, sometimes you can’t simply destroy the foe quick enough before Leash ends. Therefore, Fearing the foe to get it out of the conflict becomes ideal, so you can fight off its cohorts while the major foe is out of the fight. 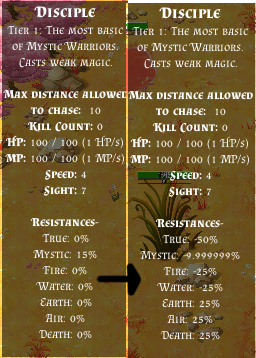 Resistances play a pivotal role in this game. And being able to alter them to your favor is of great importance. Each foe has a different set of Resistances to particular elements, so sometimes its a good idea to cut a foes resistances in order to utilize a different army composition.

In addition, each foe has a variety of Elements that it can invoke, and each of Player’s Units have a different set of resistances. Being able to alter your own Resistances can be the difference between defeating a foe and not.