Not all our developed bosses need be tough, powerful bosses. In some instances, weaker minibosses can pose excellent training tools for new players to develop their skills with.

There’s quite a bit of ‘teaching-tools’ demonstrated in specific boss design, to further enforce particular mechanics that are necessary to furthering one’s understanding to the game.

Introducing the Wingless Whisperer, an adaptive, illusive boss that highlights some very core, fundamental aspects of this project’s combat.

Let’s first go over some of its attacks, then go over why these are crucial to a player’s introduction to the world.

The first attack it can utilize is its Right Claw- embedded within it is the ability to inflict Deep Wounds, a status ailment dealing great damage over time.

Its next attack is where the miniboss gains intricacy- its Left Claw. It strikes no enemy with said claw- instead, it merely strikes itself. And, in doing so, both heals, and changes the dynamic of the fight- by invoking Truth Reversal upon itself. We’ll go into more detail about how this works, and why its a key factor, a little bit later.

Its last skill is its Invisibility: while hiding from the player might pose some usefulness, what’s important to gain from Invisibility is how to fight it- many things within this world can turn Invisible, and its important to not only spot them, but also how to engage them. Invisible foes cannot be seen in any way, meaning that if the player wishes to engage them, they must do so manually. This is the Wingless Whisperer’s first teaching tool- an invisible target must be engaged directly. Thankfully, there are some tools to accomplish this. Any attacking spell can be cast on it normally; what this means is all you have to do is take a spell on the hotbar and cast it upon the fiend, and your warriors will do the rest. This dynamic is further emphasized with its movement- you need to actually target the creature to strike it, so be quick, and accurate. 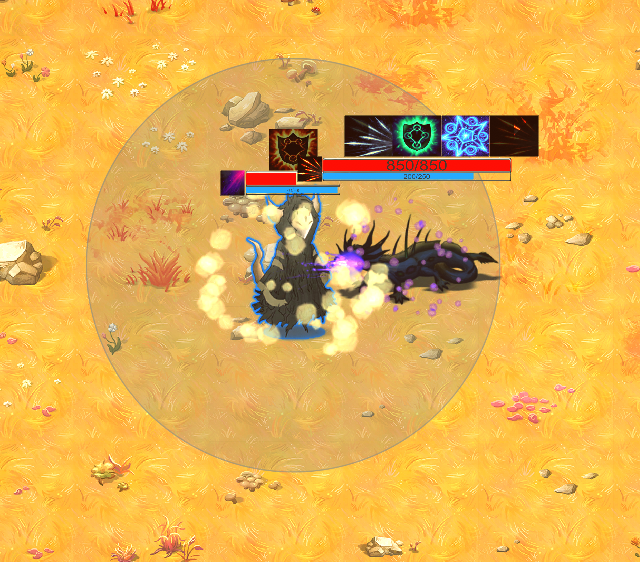 The next teaching tool returns back to its Right Claw- as you can tell by the image above, it strikes in a particular area. Simply put, this should directly indicate that having your warriors stationed together is a very, very bad idea, and spreading them out is a must. If spread correctly, only 1 warrior will be hit by the attack (or none, if you employ some dodging, but that is a bit more advanced and requires precise timing). Meaning you’ll only be having one warrior take the damage of Deep Wounds in a given instance. As that warrior loses health, its best to back it off from the fight and have the Wingless Whisperer target a new warrior, as to allow for healing the hurt warrior before it dies.

The final teaching tool is one we alluded to a bit prior- Truth Reversal. Truth Reversal is, simply put, one of the many status ailments that alters one’s resistances. This one in particular is quite interesting- it, essentially, reverses the Wingless Whisperer’s resistances.

As you can see in the gif above, all our warriors are casting Mystic Bolt upon the Wingless Whisperer, and it is doing essentially no damage at all. However, with Truth Reversal active, our Mystic Bolt is now useful, and we can get some good damage in.

This resistance alteration is pivotal for the game’s design: not only do many much stronger bosses utilize alternating resistances, so this is good practice before the real fights are to occur, but just simply understanding how resistances work at their core is crucial to engaging all the various foes of the world. Understanding what an enemy resists and what it doesn’t is critical to defeating it, and being able to swap from casting spells of Elemental type “Mystic” to Elemental type “True” as necessary is a part of the game that the player needs to understand. This boss teaches the importance of utilizing the element of a particular spell to its full advantage to overcome a powerful enemy.