Time to talk Crafting - specifically, Oil Crafting! And what goes better with Oil Crafting than Foraging - so we're going to discuss that as well, in this weeks DevBlog!

Posted by CeruleanGames on Dec 9th, 2019

Now that's a buzzword. From Match-3 games to huge MMOs, pretty much any game these days has the ability to find things and turn them into other things. For Purrtato Tail - it was a buzzword that we weren't sure if we wanted it to be part of our game or not. But, eventually, we caved - because let's face it, crafting is a lot of fun when it's done right! And as we worked through the development, the more that it made sense to use crafting to increase the cohesion of everything within our game.

The core concept behind Oil Crafting is this: The player can add any number of 3 separate item types to an Item Press device. The Oil Press is activated, the items are removed from the player's inventory, and we check the library of all possible combinations to see if a match was made. If a match was made, the player earns that object.

Rather simple and straight-forward... but like most anything in game design, there are some hidden hurdles and gotchas to making this work smoothly. The first of which being - where does the player get all these items? To answer that - we decided to add Foraging. Foraging really is just 'randomly generated objects in the world that can be collected'. As the game world is open however, we had a few additional concerns to address...

First, we realized that having all these foraging objects in the world would result in having Tips scattered absolutely everywhere. And... that... just doesn't look good.

Imagine trying to fight enemies in the middle of these with icons cluttering up the screen.

We sat back and said, "How can we make this not as ugly, but still function in a fun manner?". What we came up with was 2-fold. First, Foragable objects have a unique visual effect to them. Secondly, foraging isn't just 'press button get object' - instead, the player 'Forages' the object by holding down a button to fill a meter. As gameplay progresses the player will encounter objects that are harder to forage, and will take longer to do so, unless the player upgrades their Foraging skill, which will allow foraging to always be fast.

Needs some art and effect polish, but functionally - it works!

Not all objects need to be foraged however. For example - in the Cantermow Demo, the player needs to put some Natto into an Oil Press - and the Natto is retrieved from a Vending Machine rather than Foraging. With this, Oil Crafting is just one thing that the player can do with disposable items, in addition to Tea Crafting, allowing the same items to be used in both circumstances.

Once the player has the items they want to press into Oil, it's time to take a quick visit to the local Oil Press! 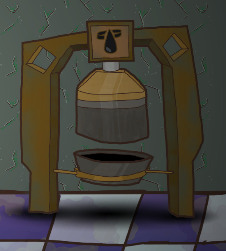 Oil Presses will be located in towns as well as some other key places, ensuring they are relatively easy to find in the world. Activating the Oil Press will pop up the Oil Recipe Dialog, where the player can select up to 3 different items, and any count of each those types. 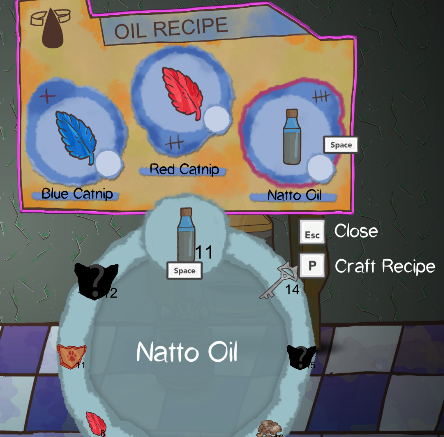 Simply select those from the Item Ring, and hit the button to make oil, annd.... 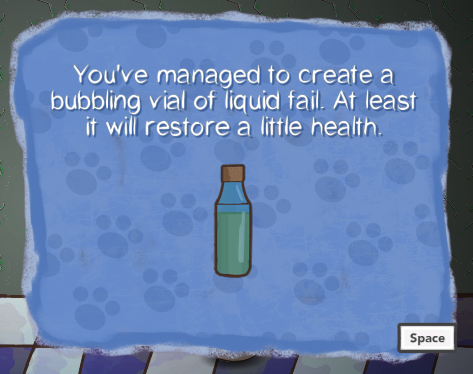 ... oh, that didn't work. But no worries - any bad combination will always result in a usable Sludge item. These can always be used to restore a small amount of health, but in some cases can also be used in other Oil and Tea crafting recipes.

What about the need to remember all these recipes? Not shown here (as the dialog isn't integrated yet), will be the Recipe List. Any time the player successfully creates a type of oil, that recipe will get added to their Recipe List, allowing for quick crafting and remembering of those recipes. Players can also find / purchase recipes in the world which will automatically add those to the Recipe List to help the player to avoid burning through everything they have to learn all possible recipes.

So that's Oil Crafting! What do you think? What kinds of oils do you want to make in the Oil Press? Let use know!