What a difference a few months make. Let's kick off with some great news that thanks to an awesome community, Folk Tale made the second round of Steam Greenlight selections and was officially greenlit on October 15th. Folk Tale received over 160,000 unique visitors and was added to over 5,000 favourites. The whole experience has been wonderfully engrossing for the team and we look forward to working with Valve over the next year.


Steam Greenlight
What a difference a few months make. Let's kick off with some great news that thanks to an awesome community, Folk Tale made the second round of Steam Greenlight selections and was officially greenlit on October 15th. Folk Tale received over 160,000 unique visitors and was added to over 5,000 favourites. The whole experience has been wonderfully engrossing for the team and we look forward to working with Valve over the next year.

Voice Acting
Throughout September we received a number of comments regarding the use of a single actor for all the voice roles in WIP Update 5. With the message heard loud and clear we responded by auditioning 22 voice actors, selecting 11 kind and talented individuals to work with on a collaboration basis. The voice script at the time covered cut scenes and tutorials, and each character needed expanding to include all the in-game commentary. Some of the one-liners that came back could well become memorable catchphrases.

Administering, editing, mastering, slicing, importing and integrating all those phrases nearly drove me insane, but what it adds to Folk Tale makes it all worth while. 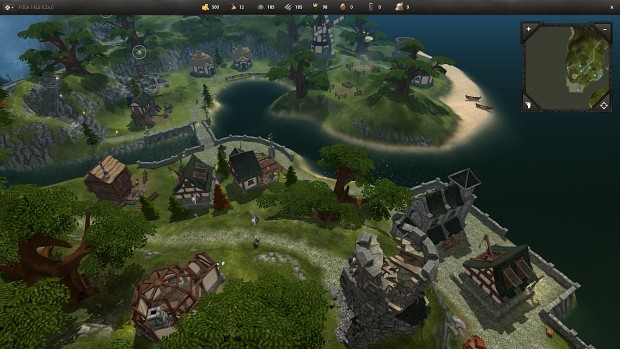 We welcomed Hayden from Australia to the team who is diligently producing the low-detail geometry versions of the human buildings, trailing Rich who has now finished modelling and texturing all the detailed human buildings required for demo. By far my favourite is the Tavern, featuring the new female Innkeeper character who fetches the mead brewed by the monks from the warehouse, bar tends and cleans tables. 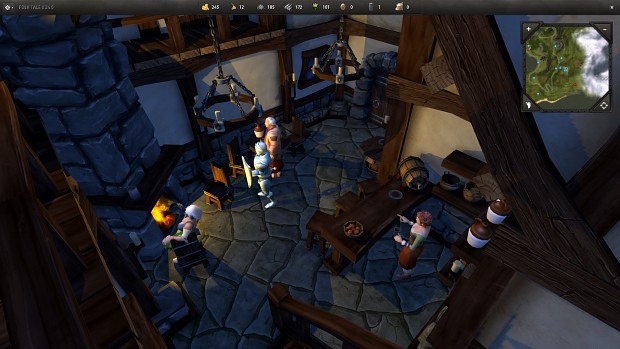 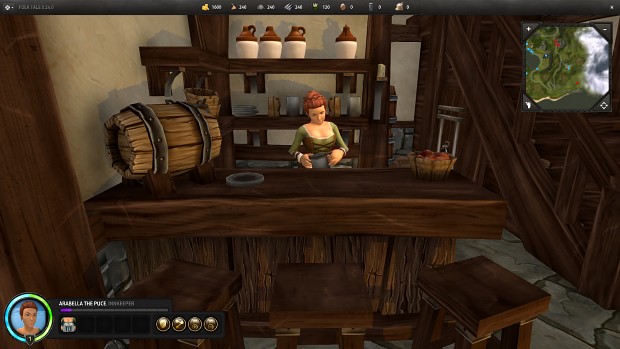 Also making a first appearance are the Advisor and the Stonecutter, completing the list of human characters required for demo, and an updated Werewolf with rigging for facial animation and variations including monk habits. When we first started developing Folk Tale, lip sync was descoped, so the early stage characters weren't rigged for it. That's an ongoing process that won't be completed until after demo. Some characters will have it, others won't. 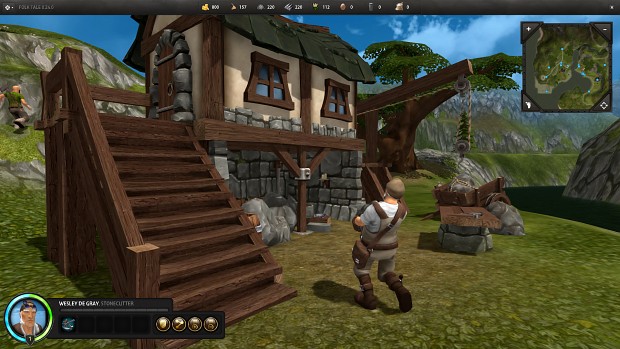 You can check out the werewolf in action at the very end of the video.

Tom has been hard at work moving the cut scene animations forward. We knew for a small indie team including cut scenes was a huge ask which is why you usually don't see cut scenes in small indie titles, and to no surprise it is incredibly time consuming. Once the demo is released, chances are we'll de-prioritize them and focus exclusively on game play elements such as multiplayer, returning to cut scenes towards the end of development. Ben completed the Dwarven forge around the lava zone, which we finished with a couple of Dwarven ghosts, massacred by a crazed Golem that whirs around the area channeling arcs of electrical energy from its fists. 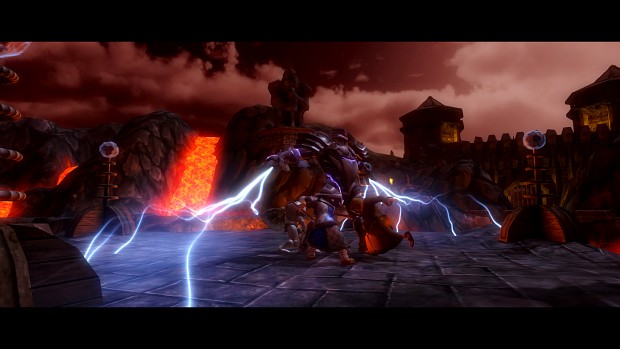 Ben has now moved on to cleaning up the snow monastery. Having finished the human assets, Rich has joined him and hopefully next update we should have a finished zone to share.

Fog Of War
Fog Of War is finally in. We still need to fog over the minimap, but the visual effect in the game world is complete and blends nicely as the player moves through the different ambient lighting zones. We achieved the look through desaturation and color tinting, with the tint driven by the Ambience Zone Manager. 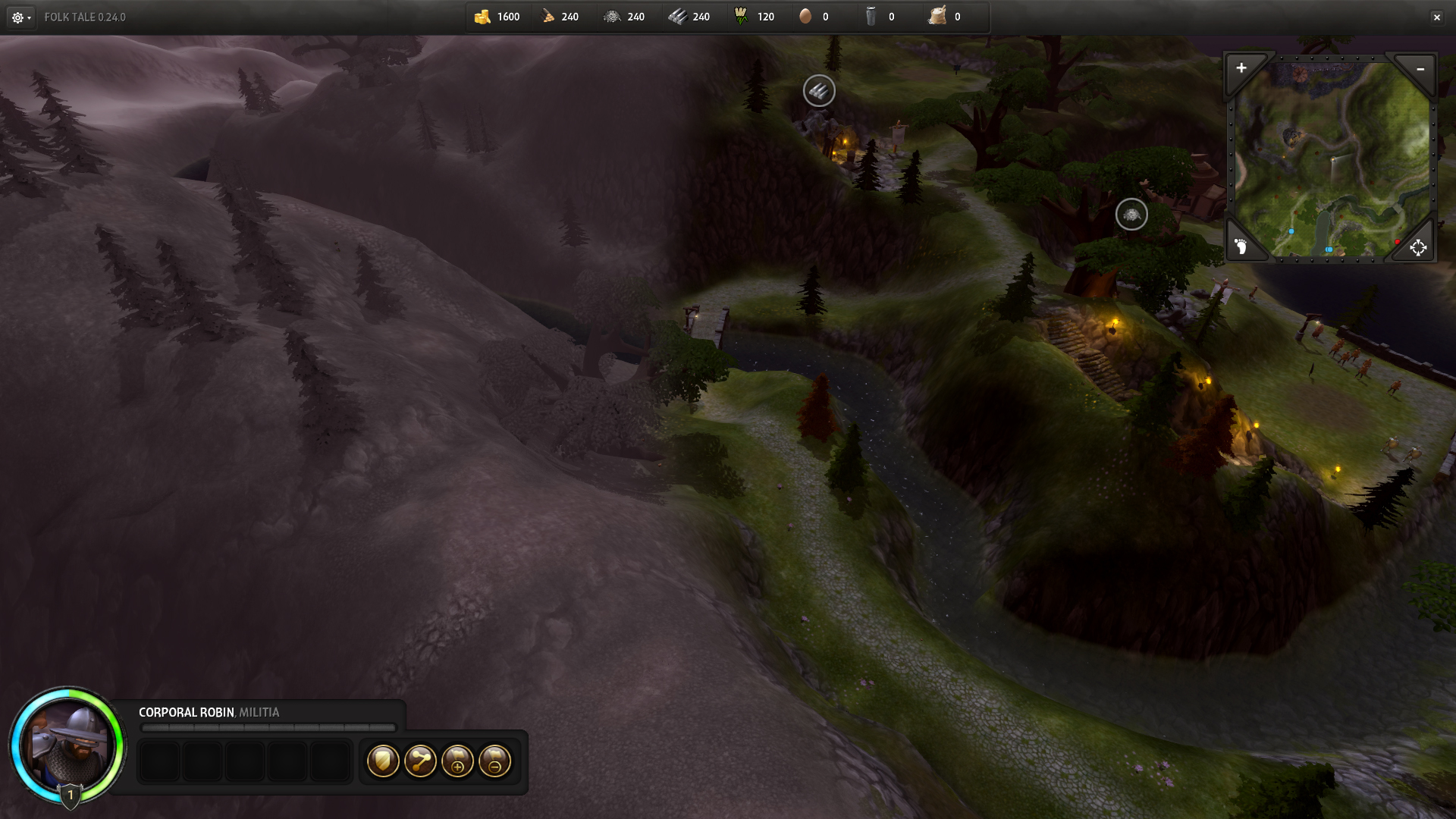 Programming and Optimization
For eighteen months we've been using a single large terrain with something like 28 textures for level featured in the demo. Unfortunately every 4 textures requires the entire terrain to be drawn once, plus a shadow pass. Given the terrain often fills the entire screen, that's the entire screen needlessly drawn 7 times just for textures. The solution is of course to break it into smaller chunks using 8 textures per chunk. This will have a huge impact on fill rate which we started to be bound by. Provisional tests identified a 150% frame rate improvement on older GPUs. We've also introduced lighting quality which at lower levels prevents point lights from lighting the terrain, further reducing the burden. Real-time shadows on point lights are reserved only for those with super-fast gaming PCs. We continue to stick to our design goal of making Folk Tale run on lower spec machines, while giving those at the higher end a visually awesome experience.

We took a peak at the Unity 4.0 beta to run a test migration from our 3.5.6 project. A few minor code tweaks and we were up and running, so hopefully we'll soon be able to add internal Linux builds.

As for actual coding, many areas of the code have been rewritten including the audio manager to better manage streaming and voice acting. Essential game play elements such as combat continue to receive a lot of attention because the shear complexity results in more bugs. A global compendium and taxonomy has introduced shared enum classification across all game objects improving code quality, and the class pool manager picks up where the scope of the object pool ends to work around the annoyingly crap garbage collection in Mono 2.6 that in our opinion continues to be Unity's Achilles Heel.

UI
In WIP Update 5 we revealed an early prototype of the heavier UI. That wasn't the big hit we had hoped, so being the responsive indie team that we are, that's booted out, and we're working on a lightweight UI. UI continues to be boring gray placeholders for testing layout. At some point it will receive a paint job.

Audio
Thanks to an introduction from our previous sound designer Roland, we've welcomed Joe to the fold. Joe has been hard at work visiting local gyms and junk yards with his microphone sourcing weapon impact sounds. The first batch of impacts were delivered shortly before the video was made, but you can hear a number in action during the combat scenes.

Oskari has started work on the tavern and human monastery ambient music tracks. Early versions of both are used in the video, and give Folk Tale a touch of the medieval.

In The Next Update...
Predominantly game play features. Artwork wise, we'll have the snow monastery reveal, and we've also got our eyes on flow maps for another leap forward in water quality. The list of outstanding assets is rapidly decreasing in size, bringing closed beta ever closer. The other eye is on Kickstarter which launches in the UK today. Although Americans make up half the truly international Folk Tale team, Games Foundry remains a UK-registered company and as such we've been waiting for KS to launch over the pond. We didn't want to launch our campaign today, instead opting to step back and watch if the US audience will be prepared to support UK projects. We'd also like to explore private investment before heading for crowd funding.

wow, this looks really good =) looking forward to it and its a shame that I didnt see it the first time on greenlight

i supported this on greenlight hoping a demo comes out

Can't wait so amped for this title :D