The start of a mechanics overhaul has begun, and the first taster is soon to be released.

Let's face it, the needs system in Folk Tale was a pain in the derrière. Constant notifications from moaning villagers, a lack of clarity on why things were happening, and a source of frustration. So we've binned it, and taken community feedback in hand.

Say hello to overall happiness, broken down into each of the positive and negative factors contributing to it. The new civics dialog tab includes an ability to set rationing on food, firewood, clothing, and mead. Players can also set the tax rate and see an immediate effect. For now, happiness is impacted by rationing, taxes, overcrowding and food variety. Overcrowding arises when a player's population reaches a maximum and more space is required, but it hasn't been popular so we'll be reworking it. Food variety introduces a new mechanic. Villagers are happier with a varied diet. Players won't receive a negative effect, since villagers can survive on berries should they need to. Add fish, bread, meat and vegetables to their diet and life looks peachier.

In happy times, player population will increase to it's maximum over time. When unhappy, players are on a short fuse and villagers will start to abandon (and in the future rebel). 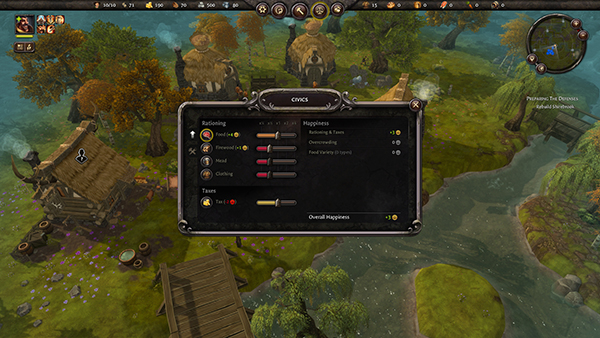 Rationing is another new mechanic. Remember the days when peasants would burn through firewood stocks like a bunch of pyromaniacs? Now players are in control. During lean times, rationing can be used to limit how much villagers consume. No-one is happy having to make do with less, but over the short term a little pain in the form of unhappiness can give players a chance to recover from supply shocks such as losing fields. During times of plenty, double and even quadruple rations can offset other negatives and provide a rapid boost to population growth.

We didn't feel the game was tangible with enough interaction with the world. We'll soon be adding world collectables are part of the campaign storyline quests, and that system has already been expanded into resource harvesting.

Peasants continue to suck at resource collection. When visiting a tree, it will be felled after several swings, and produce 1 miserly log which is then picked up and carried back to the Supply Wagon. Train a Woodcutter, and the log yield instantly doubles. For each of the next 4 levels, Woodcutters get better at their jobs (earning experience), and the yield increases by 1 for each character level, up to a maximum of 5. So now players will care a little more about losing a Master Woodcutter. In times of urgency, peasants and workers can be selected and logs on the ground interacted with (they highlight on mouse over) to command them to assist with collection. 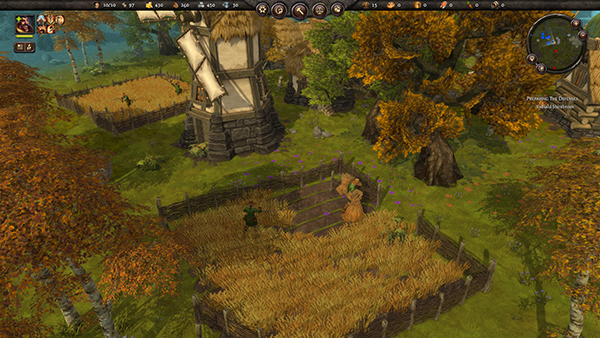 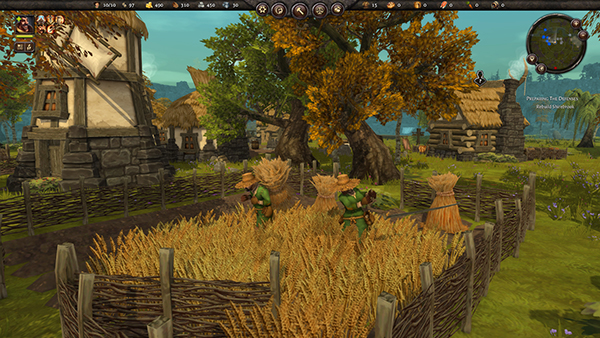 Fields work in a similar fashion. We've segmented fields into four quadrants, and each quadrant can be cleared independently. So if players have 4 farmers sat around being lazy, when a field is 100% grown, they can now all work the same field. The yield from each quadrant (shown as bushels of wheat, and baskets of carrots/cotton/herbs) will depend on each Farmer's level of expertise. The changes to field mechanics mean that Tier 2 and 3 Windmills and the larger workforce that they support can now be put to better use.

For Alpha 25 we're overhauling research. Research will no longer be progressed through the delivery of resources. Instead, there will be a one off gold cost, after which a progress bar will increment. For buildings with workers, each worker will contribute a little towards speedier research.

By removing resource delivery as the driver of progress, the issues with Barracks, Storehouse and Workshop are removed and the process simplified for the 0.3.5 release.

Research will in future be tied to building tiers, so that advanced research such as Plate will be dependent on unlocking Tier 2 or 3 buildings. We may also lock higher level crafting tiers to building tiers. For example, while Plate research might be unlocked with a Tier 2 Blacksmith (enabling uncommon crafting items), players would require a Tier 3 Blacksmith to craft rare armor items.

Armor will become a prerequisite for unlocking certain military units. We're introducing Spearmen (and women), an early stage military unit with leather armor, spear and buckler. To unlock them, players will need a Tier 1 Blacksmith and to complete Leather Armor research. That in turn will unlock the Barracks construction option. Building a Tier 1 Barracks will then allow villagers to be trained as Spearmen.

Here's a breakdown of the proposed pre-requisites:

Work continues with implementing the Withering Dead and Gladefolk storylines, introduced to the player by Kenny and his band of brigands. With the recent addition of portals enabling us to link maps together, Shirebrook is now connected to the Bandit Caves and Mordrich's undead sandal factory. We're at the point of needing collectables, and that work has been completed as part of the resource harvesting overhaul. Once players can pickup objects (adding them to inventory) to progress quests, we'll continue with the Withering Dead script. Voice acting continues to be added as it becomes available. In the experimental build that means some conversations will have patchy VO coverage.

Mordrich's sandal factory is already well progressed, and the Art Team have been putting the finishing touches to a variety of mad scientist props that we need for Mordrich's office and Brom's engine room. Once those are complete, our attention will switch back to finishing the Glade, the next dungeon in the storyline sequence.

The entirety of the Swamp/Grublin/Toadkin storyline scripts are now complete, and work on the Snow/Order Of The Fang/Glacians is currently around 50% complete.

Character production is well ahead of the roadmap, following the faction structure of leader, hero, behemoth and supporting cast. House Hraun is a dwarven faction residing in the lava fields. Technologically advanced, House Hraun is at war with the Cult Of Pyros, a pyromancy-based faction that we'll look at in a future blog. Freya the paladin hero currently has a goatee; not all design choices are good ones and we're in the process of removing it. I also feel she needs a helmet to feel more like a heavily armored paladin, what do you think? 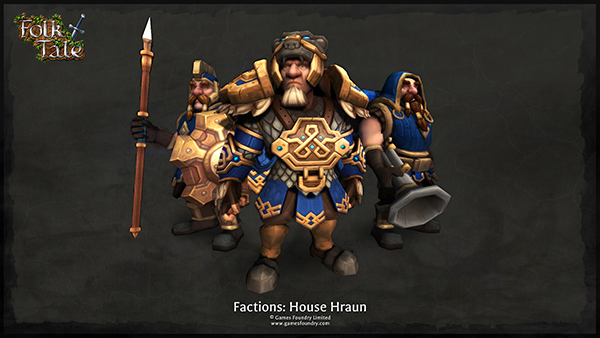 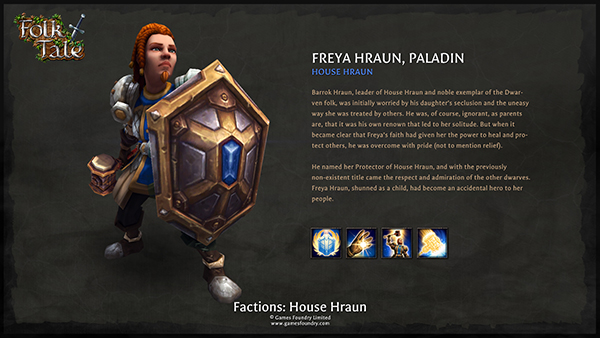 Devin, the team's Texture Artist, continues pumping faction-branded weapons so that players can gear up villagers and heroes with loot. At launch we should have weapons available in most factional variants, other than where it makes absolutely no sense in lore. Some will receive particle effects to reflect their magical nature. 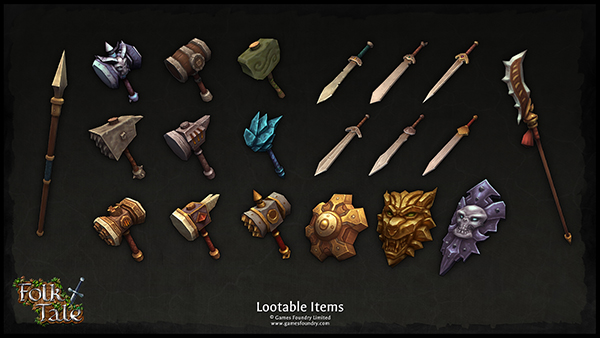 In the future we'll be adding a dynamic loot generator for chests and corpses so that appropriate loot is dropped depending on the composition of the player's adventuring party and their level. We can't anticipate how community level designers will order their worlds, so therefore we cannot have the fixed stat items that are currently shown on the website. If a level designer wants the lava zone to be their first map, we can't really have all dwarf gear being fixed level 18-20 gear. That would completely ruin the game.

The same is true for monster levels, so we'll introduce scaling around the same time. Obviously we're keen to prevent level 1 dragons from appearing in community worlds, so we'll most likely force minimum level caps on most bosses, and where possible swap out monsters.

The Editor grows in power and features with the addition of terrain sculpting and new workbench visual scripting nodes. Terrain sculpting is an impressive feature for raising and lowering land. That might not sound impressive until you consider we have a tile-based terrain system. All the tiles in the proximity need to be recalculated and matches found in a limited tile set.

The terrain sculptor tool comes with a constraints system for additional flexibility, enabling level designers to add fixed rules for what terrain must be used in surrounding tiles. For example, enforcing where rivers must flow. 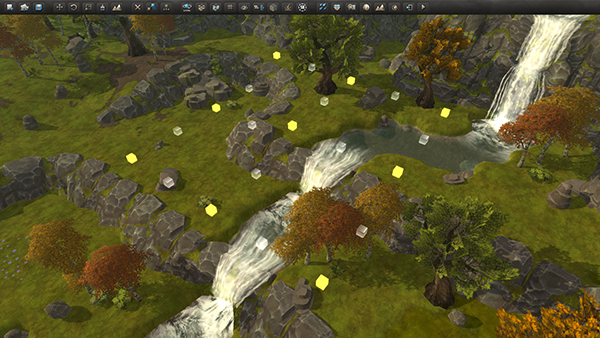 Terrain generation and sculpting tools now provide both us and community level designers with powerful time-saving tools for creating new worlds. When combined with the visual scripting environment known as Workbench, it's becoming faster and easier to create richer and more engaging worlds.

We're almost finished painting portraits for all the existing characters, monsters and animals. Community level designers will soon be able to have talking chickens, pigs and lord knows what else delivering quests should they so wish. In parallel, many of the hero ability icons have been illustrated, and will make their way onto the website in time. 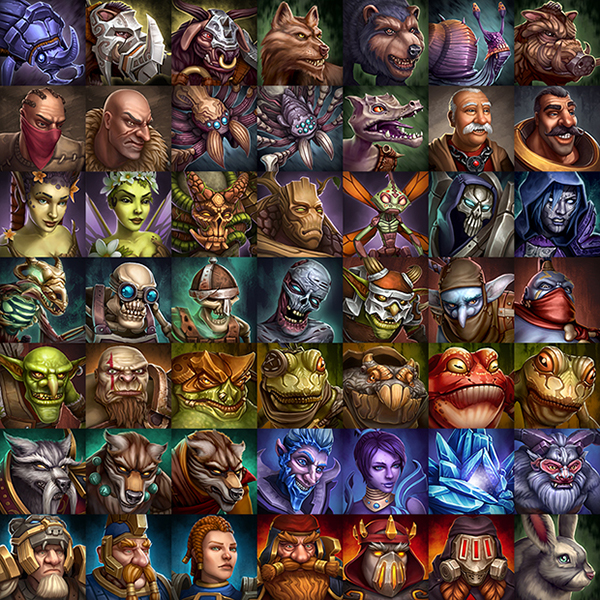 By the time you read this, the next patch (0.3.5) should be in QA testing and gearing up for release into the experimental branch. It's undergone a lot of rebalancing, so please do give it a good test and let us know how you get on. We need to strike a balance of not easy, but not insanely difficult, and your feedback helps us judge how we're doing.