A look at updates to the Solar System game mode, which combines RTS and 4X elements.

Lately one of the big features I've been preparing for the eventual release is the solar system game mode. There are a lot of other improvements to the interface, the AI, and some graphical updates, but I've been holding off on posting an update until I had a really big feature ready. The solar system game mode, which I've shown a little of previously, is more of a 4X/RTS hybrid than the standard skirmish mode and the goal is for it to provide a longer, more replayable experience. As it's getting closer to the paid release, this game mode is one of the features that I won't be adding to the free demo, however when the time comes, there will be an updated demo with the other graphical and GUI improvements that have been added to the game. 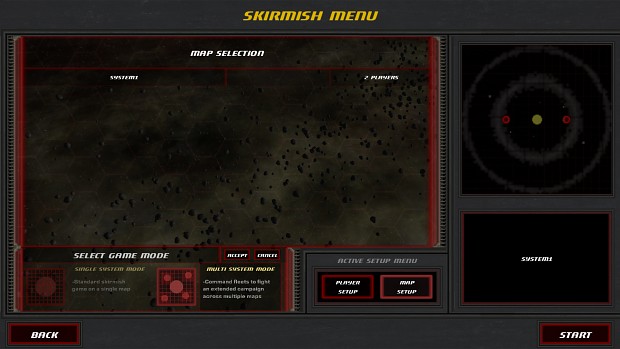 The basic premise is that the player controls fleets (collections of regular ships contained in a single icon) and attempts to conquer planets and create space outposts in order to control territory, which then grants the player greater income. 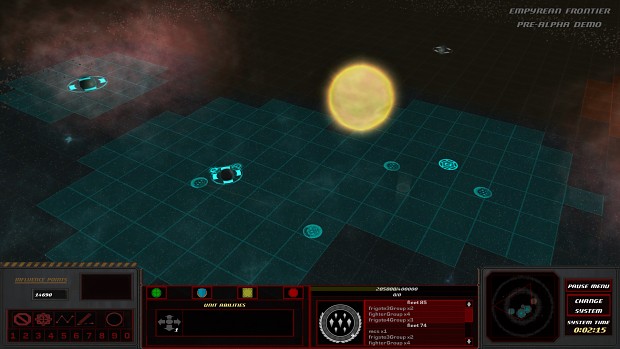 When two opposing fleets meet, this action creates a battle event which is marked on the map. Since all parts of the game take place in real time, each player has until the battle countdown finishes to send nearby fleets to join in the battle. Once the countdown reaches 0, the main system is paused and the player goes to the newly created subsystem in order to fight the battle as a traditional RTS skirmish. Here the player has sent 2 fleets into a battle against a single enemy fleet.

Battle systems are randomly generated based on the surrounding space in the solar system map. If a battle takes place in an asteroid field or a nebula, the environment of the battle system will reflect that. (Here you can see a few of the graphical improvements that I've been working on since the last update.) Once the battle is over, the winning player gains ownership of the now inactive battle marker, which grants control over the surrounding space for a short time.

In addition to the fleet vs fleet fights, battle events can also take place in planets or player-created space bases. These permanent points of interest are important because they can be upgraded with 4 kinds of prebuilt bases: fortresses, shipyards, trade ports, and research facilities. Like fleets, each of these base icons represents a group of standard units that will appear within the subsystem. Each base contains a Command Center and various other building modules, depending on which type of base it is. Some of these bases have additional effects, such as the shipyard which allows the production of new fleets, the trade port which generates additional income, and the research facility which raises the starting tech level in that subsystem. 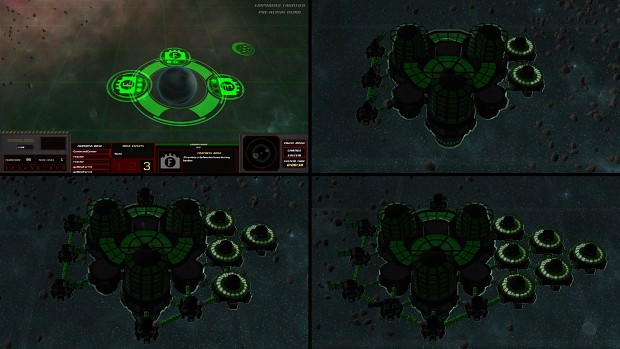 Above: fortress bases, shown at levels 1, 2, and 3, provide a strong defenders advantage should enemy fleets attempt to attack this planet.