We're really excited to finally show a preview of next alpha's UI. We've been working on it a lot in the last months and kept it secret all the way but today's the day!

You've been linked here and you're wondering what is this game? Go check our "About The Game" page! 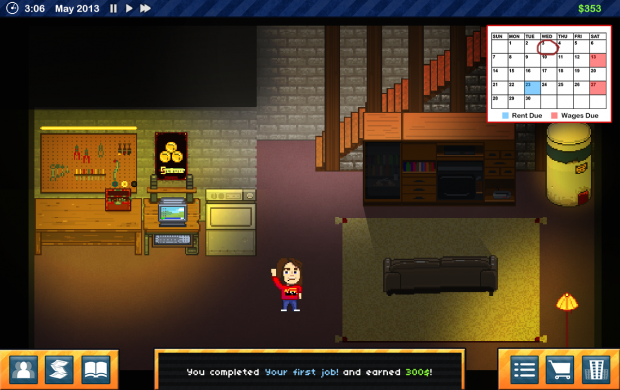 If you put some attention to the details in this screenshot, you'll notice a few unannounced features. Some might or might not be in the next alpha, such as time controls, etc.

There's still a few tweaks to add, but all in all we're really satisfied with the results. It's going to be even more cooler once it's integrated in the game and you'll be playing with it ;-)

Meanwhile, Indie Game Story has been slowly forging its own game genre playing between standards simulation games and story-driven RPGs. I've been planning for the whole month and I think we really found something no one did in the past, a way to make you feel like a real indie game developer. That's the RPG side, the morale, the depression, the determination, the consequences coming with each aspects. We're working on a totally immersive player experience based on your own character (you'll have to pick a character at the beginning which is the reason why people are donating. You can have yourself drawn in the game with your own name!

We hope that you're as excited as we are about this one, this is the first time we show the UI which is a big deal for us.

We published a Roadmap last week, giving you the opportunity to sneak on the game's development, with detailed feature list, percentages and more goodies! Go check it out, it's definitively exciting to look at!