So the first tile set is done, here's a preview of them without any resource or landscape coloring.

The first tile set is done, in its neutral coloring

Meaning its in neutral gray and not in any of the themed coloring from the other screens. Each tile will get its own coloring based on either resource or landscape theme.
The final game will feature both the neutral tiles for un-claimed or fog-of war versions and the colored versions. Most resource objects aren't visualized yet, imagine mines, crystals and such to be added for each tile Those tiles with ruins already, will automatically provide the Archaic resource and the lava-pits and Volcanoes provide the Hearth resource. There's four resource types in the game the others being blades resources(iron) and Blood resources (life resource essential for summoning, very rare usually obtained from defeated enemy units)

These four resources are required for summoning the shades that serve as units in the game Indiedb.com

Also roads are darker and turned off in the screenshot , although some obvious paths can be seen in the visual.

In other news, Oberon's Court now has its own proper URL www.oberonscourt.com Yes a free .com miraculous! 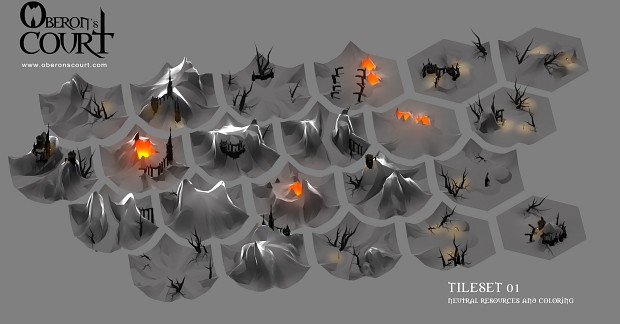