Post news RSS First look at the multiplayer client and I need your input!

Work on the multiplayer side of Samphi is going good. Here is a first look at the server client and a quick breakdown of my multiplayer plans. Also I would like your input into how I can make setting up servers as simple as possible.

Posted by GreenyGamesStudio on Jun 25th, 2013

I was originally going to leave multiplayer until Samphi hit v1 and official alpha. Right now Samphi is still in pre-alpha. After a bit of thought I decided to scrap this plan and get multilayer added as soon as and build it up gradually with the rest of the game. I did this because one of the main aspects of Samphi is playing online with friends and building/fighting together so I want it up and running as soon as. 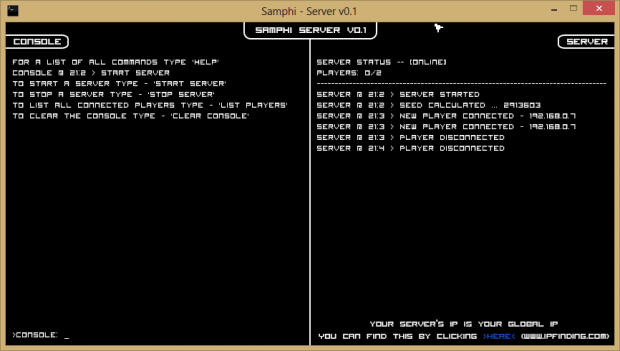 The left portion of the client is the console where you enter your commands to manage the server; such as banning players and send messages etc. The commands for server are going to be really simple. To start a server you type ‘start server'; to stop a server guess what you type? ... ‘stop server'. It isn't going to be one of those stupid ass hard to use clients that requires 50 lines of code to start a server. I want to make it as quick and easy as possible to play with your friends.

The right side of the screen is a log of your server's activity. In the client above you can see the server log shows the seed being calculated and then 2 players joining then leaving.

That is as much as I have got done right now. The server client is run and then when you run Samphi you can find the server and connect. Now I need to build on it and add more functionality which is where you guys come in. I would like to know what kind of commands and functionality you want form the server. I will be adding all the essentials such as list players, kick players, save server, but I would like to know if there are any commands you feel are usually left out; Thinks that would make it easier to manage.

Online Player
Another quick thing I wanted to mention was that the characters that you play with online will be the same characters that you will play with in the single player. Samphi currently only allows you to create one player but this will change later in development and allow something like 4 different characters. When you select multiplayer you will simply select the character that you play with offline and you will have access to the materials that you have in your inventory at the time. I think that would be cool; you start a server with your mate but don't want to farm all the wood so you jump into single player, grab a load of wood and bring it with you to multiplayer.

These are all initial plans and obviously the game is in a crazy early stage so they are subject to change but I'm pretty happy with them so far. If you have any suggestions for commands you would like to see the server client have, or anything for that matter, leave a comment on this news article, Samphi's main page, wherever. Also if you don't already you should follow @greeny_games on twitter for general indie nonsense and @SamphiGame for Samphi related news. The twitter feed will be the main source of the latest development news.

Thanks for reading and see you next time!

pretty nifty Greeny :) cant wait to see this all come out. I just hope you're not biting more that what you can chew. Other than that high hopes for this game, and keep chuggin along Greeny :)

Thanks! TBH I think I have a little but I enjoy the challenge. This is my first full game that and choosing a big project like this with multiplier ... Has challenges aha :D