Let me show you the first member of the "Cytroid", the heartbreaking, robotic, enemies you will outrun, outjump or simply shoot on your way to the top. 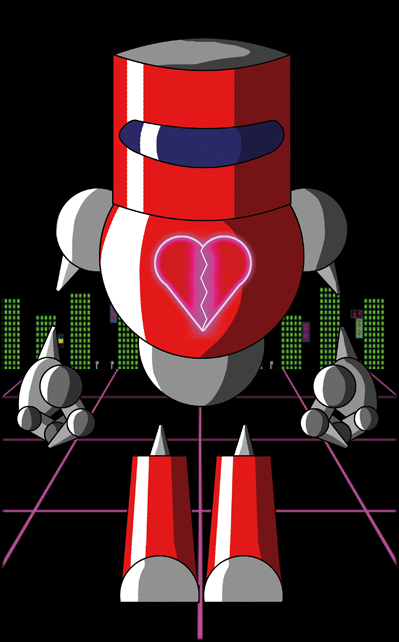 The first member of the evil "Cytroid" is called Red and has nothing special to offer. He is a simple and slow footsoldier but will walk towards you without fear.

Since he is no big threat to you, you can:
- Simply walk around him
- Jump over him
- Shoot him in the robotic face with some coins!

However this is just the beginning. There are more Cytroids you will encounter on your way to the top of the leaderboard. They are Cyborgs just like the running cyborg itself but less human. I was going for a mix between cuteness and childish coolness.

The symbol on his chest, the broken heart, is the symbol of the Cytroid. First of all it is there since I wanted a purple glowing heart on the enemies chest and second because it shows the cytroid's ambitionto break the player's hearts(his/her lifebar!).

Red is already in the game but his animations are still not ready to show so I will show ingame footage at a later date. All I can say for now is that it will be a 2D Sprite in the 3D world. I tried to focus on the 80s cartoon style and figured out this would be the best way to do that.

I will show some ingame pictures of Red in the next days/weeks as soon as he is finished. After that I will start with the artwork for the second Cytroid.

Feel free to leave feedback on the overall design of Red if you like.