Ten days ago we released out first Beta build, this is how it went!

ten days ago we released our first Beta build. Normally that would've been followed by the usual update to backers...

Instead it was promptly followed nine days ago by our second Beta build which fixed some nasty game-breaking crashes ^_^# (and in the case of the OSX windows, a missing library + incorrect linking which could prevented starting the game altogether…).

Thankfully things have been a lot smoother since, crash logs have started coming in more sporadically, and we even collected some pretty amazing feedback from you guys!

You can find the full list of changes on the forum, but here are some highlights of the changes based on backer feedback and suggestions:

- Movement and bullet speed: probably the first change you’ll notice: a lot of people mentioned movement being a bit too fast, so we slowed things down a little...

Ok so that's actually me having fun with the Time Bender, but we did slow everything down a bit ^_^#

- “Cinematic” black bars: whenever the camera pans away, blacks bars slide in at the top and bottom to give a more “cinematic” feel (this also now pauses the game):

- Auto-aim on / off: you can now turn auto-aim off in the options menu. It's also been fixed to not "get stuck" on things like hidden walls ^_^#

- Gamepad "deadzone": you can now set the stick’s sensitivity in the options menu

- Mini-map "hold down": displaying the mini-map now requires you to hold the map button down

- Saving icon: a saving icon now indicates when the game is being saved

There’s also a lot more things like crashes and bugs that we fixed thanks to your feedback, so by all means please keep it coming!

And of course some additions of our own, like the new music track for the Sweatshop or new HUD. But more on that from the man himself in ...

Thomas: On the art side I worked on tons of things, mainly on the new level and new enemies. But since this will only make it in the game in the near future I just want to share some gifs and talk about some small graphical improvements for this „Technical Update“, which nonetheless change the game experience a tiny bit:

- A completely new main HUD design: I redesigned this one from scratch, and took care of many „feedback issues“. All visual parts got unified, it's overall smaller, much clearer and your HP are placed where you can see them indirectly. This HUD also makes loosing limbs much clearer then before. 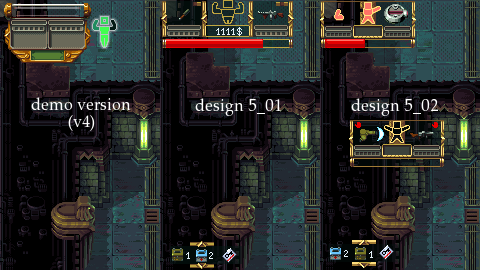 - A little teaser of upcoming stuff: 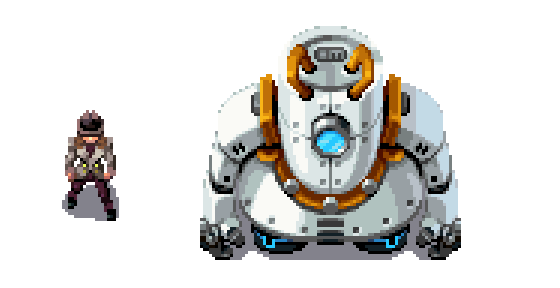 The next Beta build:

The next Beta build will focus a bit more on content, with new enemies and a new boss joining in the fun.

In the meantime, if you’re a Beta backer, you can check out our dropbox to download Beta build 1570 :) (sadly you will need to start a new game ^_^’).

As always, we sincerely hope you will enjoy it!

Awesome as always! Great job with animation, lighting and all action. Love the loot and destructive objects as well. Keep up the hard work